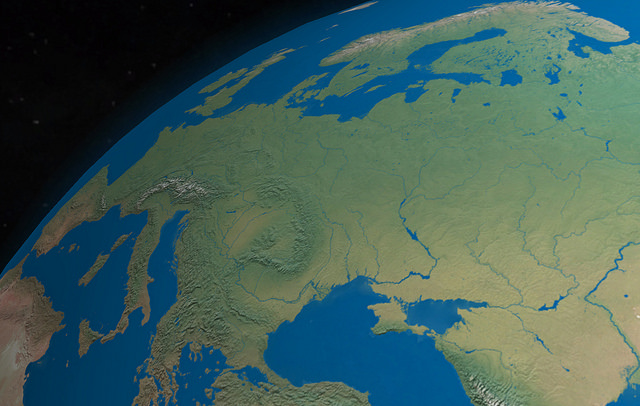 Although "Eastern Europe" is more of a political term than one that carries any geographical meaning, it is usually shorthand for the countries that found themselves behind Churchill's "Iron Curtain" during the Cold War. Since the fall of the Berlin Wall, these countries have reasserted their diversity along with their independence. And while the majority have joined the European Union, Belarus and Moldova have felt the continuing pull of historical, cultural and economic ties towards Moscow, while Ukraine most visibly straddles this fault line between "Eastern" and "Western" orientations. Nevertheless, even E.U. member states such as Bulgaria and Romania share commonalities with other economies in the region such as Ukraine, Moldova and Belarus, meaning that it is possible to analyze trends in the region at a high-level, beyond the former three countries that are the focus of this Mondato Insight.

And if Eastern Europe is geo-politically split between East and West, the region's Digital Finance and Commerce (DFC) ecosystems share the same Janus-faced characteristics. Bulgaria, Romania and Ukraine have good communications and financial infrastructure, along with educated populations, that remove the opportunity / need for payment technology to "leapfrog" 20th-century legacy infrastructure in order to ensure access to financial services. Although around three fifths of the population has a bank account, they are frequently used solely to cash out salary payments. The majority of banks in the region offer internet and mobile banking, but these are mainly for showcasing as few customers use them: less than 5% of banked individuals in Bulgaria and Romania use internet banking, compared to an EU average of 46%.

“Digital finance in Bulgaria is non-existent. There are applications available in the market but usage is extremely low, the user is not convinced that they want it nor that it is useful for them,” shared Bogdan Stavrev, VP of Business Development Manager at BORICA, a Bulgarian card issuer, in a recent interview.

In the same tone, a Ukrainian digital financial services executive recently offered Mondato her opinion that “digital finance is just starting to develop in the region, the markets are too small.”

Approximately 60% of adult population in Bulgaria, Romania, and Ukraine have a debit card, according to the World Bank Findex, yet the bulk of the debit card transactions are simply ATM withdrawals. While payment infrastructure exists for larger wholesale retail payments, the same cannot be said for smaller merchants, as the fees are generally inappropriate for the scale of their businesses. Furthermore, there are few incentives to promote consumer usage of digital payments, as prices of everyday goods in Eastern Europe are comparatively low when compared to Western Europe, and it makes little sense for consumers to use a card for the local equivalent of a €0.50 or €1 transaction. <!--- DIANA: CAN WE ADD A LITTLE MORE ABOUT THE MILLENNIAL DEMOGRAPHIC: HOW ARE THEY PAYING FOR DIGITAL CONTENT, ETC?--->

Bank fees in the region are high and applied to services that are often free in Western Europe. For example, Unicredit Bulbank in Bulgaria charges for balance check at ATM (€0.05) and cash withdrawals from other banks' ATMs (€0.50). Much of the region is still recovering from the after effects of the 2008 Financial Crisis, and people are often distrustful of banks.

“People do not want to use their card at a POS because they are not aware that these transactions are free. However, they also cannot easily check their balance if they do not use cash. ATM balance bears a fee, and most people do not have access to Internet banking as they do not trust it but because they have to pay for their own PIN pads to access the service,” added Mr. Stavrev.

One solution would be to transform banks' business models and enhance customer financial literacy. Other innovations, as piloted by Privat Bank in Ukraine, include loyalty programs and cashback. Yet, as in many developing markets, the biggest hurdle remains on-boarding consumers and incentivizing them to take that first step and carry out their first transaction. This goal is clearly realizable, and with the right education and incentives should be part of the strategic plan of every bank in the region.

The interest rates on bank loans in these non-Eurozone countries are high, with 8.3%, 8.5% and 17.7% lending interest rate in Bulgaria, Romania and Ukraine, respectively. The equivalent rate is 0.5% in the UK. Most people, however, have no option but to take payday loans, since they do not use their bank accounts and thus do not have a proper credit history. The payday lender market is extremely well-developed and profitable. Companies such as Easy Credit and Credissimo in Bulgaria market aggressively, so their customers end up taking loans they cannot afford. The sector is growing and is likely to be a good investment for the next few years, but the barriers to entry are high, largely down to complex regulation and the required tech investment (both back-end and front end investment is required for collections). This means that it is unlikely that any other than the big players already in the market will be able to succeed.

At first glance, there would appear to be a burgeoning startup scene in Eastern Europe. However, a DFC investor in the region told Mondato in a recent interview that a closer look reveals that few of the start-ups are indigenous. Startups tend to be foreign companies that have set up shop in the region to take advantage of lower operational costs and a plethora of qualified developers. Problems for homegrown companies include difficulties in access to local capital, as well as small size of the local markets and the lack of purchasing power of the population. Thus they must look West for a significant customer base with purchasing power.

The news is not all bad, however. E-commerce is growing in the region - it was valued at €23.4B and grew 25% in 2015 - and should continue to expand in the next 5 years. However, about 90% of e-commerce in the region is cash-on-delivery, shared a Ukrainian expert, making the payments ecosystem more closely resemble a developing economy than an advance European one. Although the sector is booming, it cannot move past cash, as highlighted by Mr. Stavrev:

“The main issue is trust, not in the payment method but in the merchants. Users need a delivery and quality guarantee and easy chargebacks”.

Fintech Is The Answer, But What Is The Question?

The combination of the region’s heavy-handed bank regulation, low operational costs and significant consumer price sensitivity collectively create an opportunity for fintech to shake up payments. Companies that can provide appropriately-priced services, such as Transferwise, have the potential to transform the market. Equally, schemes and innovations that support e-commerce (e.g. installment payments, invoice financing and payment services) should see huge growth in the region as well. Banks and fintech companies in the region no longer consider each other to be competitors, as banks have realized that their strength is to provide infrastructure. Privat Bank, the biggest bank in Ukraine, is building infrastructure for other companies, such as APIs, and this is just the beginning.

Although East Eastern Europe (Bulgaria up through Belarus) may not be the most attractive market for foreign companies due to market size and user price sensitivity, certain sectors such as payday lending and e-commerce are growing fast and could provide good investment opportunities. Equally, fintech solutions that can compete on price and show reliability while using the rails of exiting banking infrastructure, have a strong chance of success in this virgin DFC market.