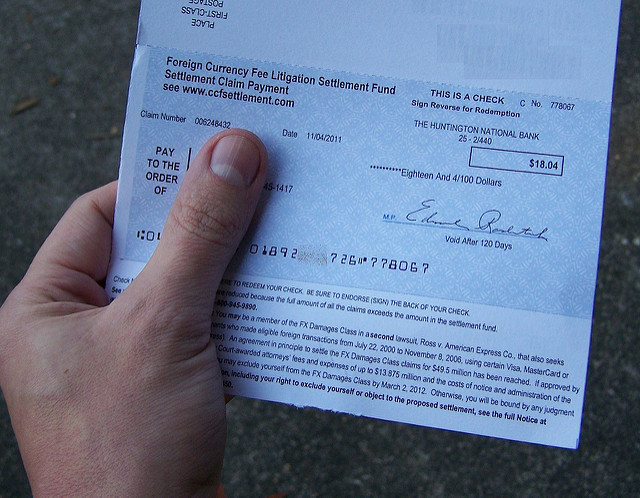 The prevalence of checks in the U.S. economy often surprises visitors. It may come as a shock to many outside the United States, but it is entirely commonplace for a business in the U.S. to send money to an individual by providing its bank with the name and address of the recipient and the amount to be transferred, on the basis of which the bank prints a check and sends it in the mail to the payee, who then, if they are lucky, takes a digital photo of the check using their mobile banking app and deposits the money into their account. If they are unlucky and for some reason don't have access to check imaging deposits, or the check amount exceeds their digital deposit limit (which can be $2000, or lower), then they have to do things the old fashioned way, and traipse down to their local bank branch and physically deposit the check. Try explaining that to a kid whose Millennial parents Venmo them their pocket money.

This may sound like an absurd way to transfer money in 2017, but checks to the value of some US$22 trillion are issued each year in the United States. In some sectors, such as the rental housing market, payment by check remains the norm. Similarly, doctors and dentists often send invoices and bills that give consumers payment options of either mailing the company back with their credit card details for a Card Not Present transaction, or mailing a check.

Under these circumstances, it is not at all surprising that most American consumers couldn't live without their checkbook, even if they harbor no great love for checks: the PYMNTS.com Disbursement Satisfaction Index gave checks a horrifying low 4.4 rating. This sounds pretty bad to begin with, until you realise that the scale is out of 100 and not 10. For comparison, non-instant credit scores a mediocre 48.3, instant credit garners a healthy 71.9, while direct deposit hits it out of the park with the full marks of 100/100.

In some parts of the economy it is the payee who prefers check payments. So, for example, it is arguably administratively easier for the management of a moderately-sized apartment block to determine whether all tenants have paid their rent on time by processing their checks than by trawling through online bank records.

For the most part, though, checks exist because they are preferred by the payer, rather than the payee. From the payee's perspective, checks have neither the anonymity of cash nor the instantaneous bankability of direct deposit, but consumer payers often don't want their credit card details floating around. In the case of B2P payments, bulk volume low value payments are much cheaper to carry out by printing a check (there, too, will always be a percentage of people who receive their check in the mail but lose or forget to deposit it). And many of the businesses involved, such as insurance companies and law firms, don't have to worry about consumer preference or repeat customers. 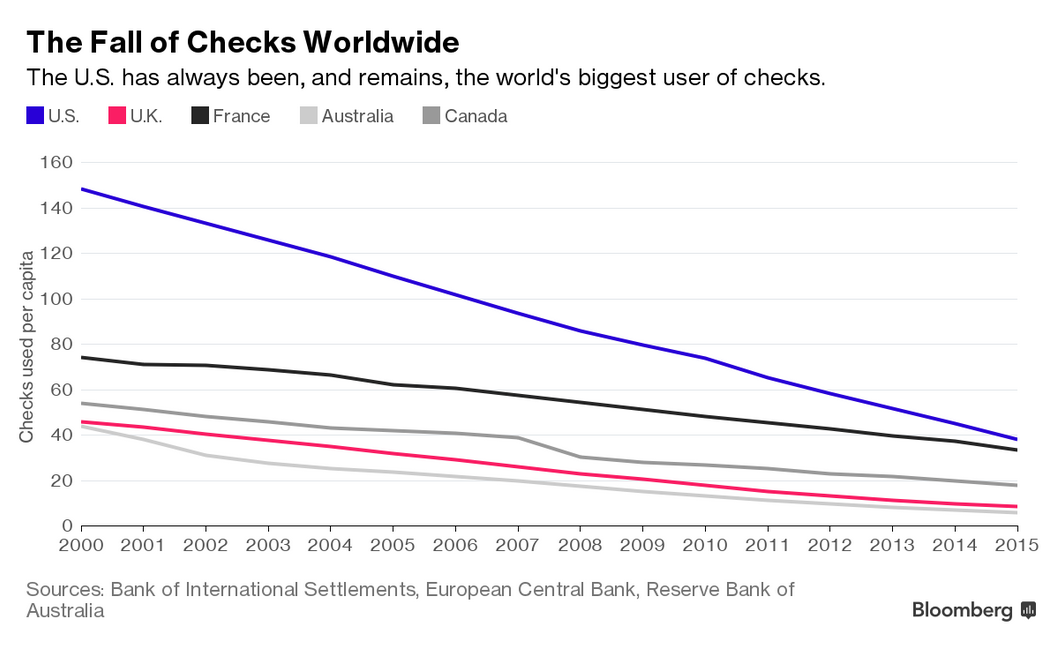 But checks are not a uniquely American problem (if indeed they are a problem at all). Although it is unlikely that many British consumers under the age of 40 have written a cheque in the past 12 months, over 500 million checks were still written in the U.K. in 2015, which is roughly 12 per adult in the population. Remarkably, this enormous number of checks stands against a backdrop of proposals from the UK Payments Council, supported by the Government, to abolish checks altogether by 2018, partly driven by the fact that there are only around 500,000 account holders who actually still write checks.

The plans, however, faced strong backlash from certain constituencies, particularly those representing older Britons and some corners of business, and were shelved in 2016.

The cheque is still a popular payment mechanism for certain groups of people and in certain situations. For instance, amongst consumers, cheques are a convenient way to pay tradespeople, clubs and societies, make charity donations and give gifts to family members on birthdays and at Christmas. Businesses use cheques to pay their trade suppliers and for ad hoc payments to other small businesses. Adrian Buckle, Payments UK (trade body)

Nevertheless, checks in the U.K. have been suffering from a double-digit year-on-year decline since they peaked at over 4 billion in 1990, falling to 644 million in 2014, and then 558 million in 2015. Payments UK estimates that by 2025, that number will have almost halved again, but which will still leave several hundred million checks circulating each year. 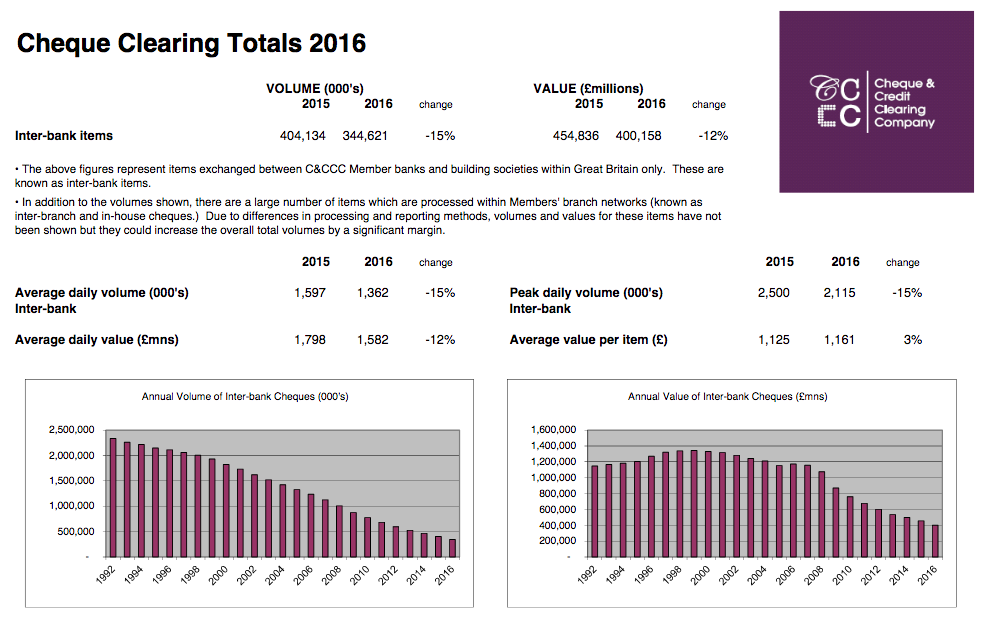 So in order to bring checks more closely in line with the demands of an increasingly digital payments ecosystem, British banks have, to some degree, embraced checks and followed the United States down the path of digital check imaging and mobile deposit.

Following a successful trial by Barclays, the service goes live for several of the big banks in the U.K. at the end of this month, and by the end of 2018, rather than cheques being a thing of the past, almost all British banks should be offering a mobile app deposit facility. Crucially, however, British checks deposited in this way will now clear within 24 hours, rather than the preposterous present-day waiting period of up to six days.


Overall, then, it appears that checks are going to remain a feature of the payments landscape, even if they will become an ever-more niche medium of transaction. The U.K.'s experience is very much in line with global trends, which saw a 13.4% decline in check volumes in 2015.

The annual rate of decline in cheque volumes is expected to slow as their use becomes more concentrated amongst those who have a strong preference for paying by cheque, such as older people, small businesses and those who are less inclined to use online and mobile payment methods.Payments UK

But rather than slow down, in some countries the pace of decline for checks has actually accelerated in recent years. Australia saw a 20% drop in check usage in 2016, mirrored by an incredible 72% increase in card transaction volumes in just five years.

The payments industry in Australia learned the lessons of the blowback in the U.K. to the proposal to abolish checks, and so for the past 6 years has been engaged in a process of managed decline, after a stakeholder consultation process.

APCA’s approach on cheques is very different from what happened in the UK. Last month, APCA launched a public consultation process to ensure that as cheques become scarcer and inevitably more difficult to use, community payment needs continue to be met.Australia Payments Clearing Association (APCA), 2011

On the other hand, the Netherlands has shown that it is possible to eliminate checks completely. The country has been check-less since 2002 without any apparent significant consequences, and there are, of course, countries such as the Czech Republic that, ironically, have never taken to checks at all.

The United States, United Kingdom and Australia make for a good set of case studies on varying approaches to the future of checks. There is an irony in the fact that mobile banking apps have secured a future for checks via the use of digital imaging. For all the efforts of people such as Karen Webster of PYMNTS, #killthecheck seems unlikely to gather a head of steam for as long as it remains in the interests of some businesses to continue printing checks.

The U.K. has allowed for the development of similar infrastructure, thereby putting checks on life support for an indefinite period, but one that is predicted to be at least a couple of decades. Australia, on the other hand, is working to help people adapt to the fact that fewer and fewer people want to and will accept checks, letting the check die a natural death in the face of a generational and digital shift. 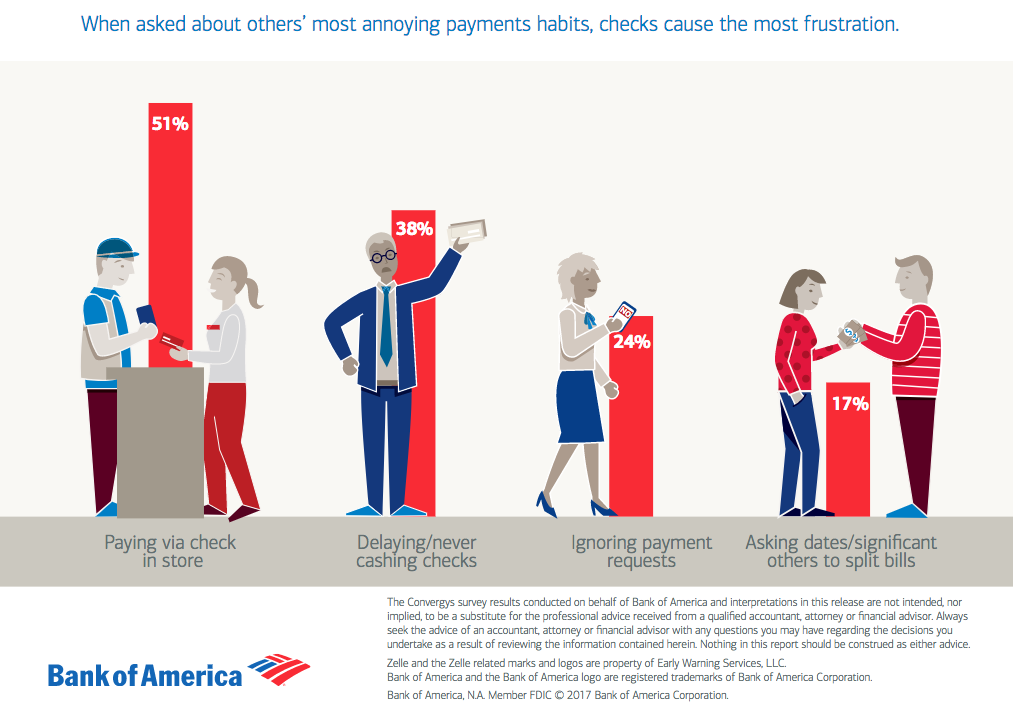 Will checks ever die off naturally in the U.S.? Perhaps. A recent Bank of America survey found that 71% believed that kids under 10 will never have to even write a check, but whether that means they won't have to take a picture of one in order to deposit it is an entirely different matter. Unlike Australia, by giving checks a new digital lease of life the U.S. and U.K. might well have made them nearly impossible to kill.