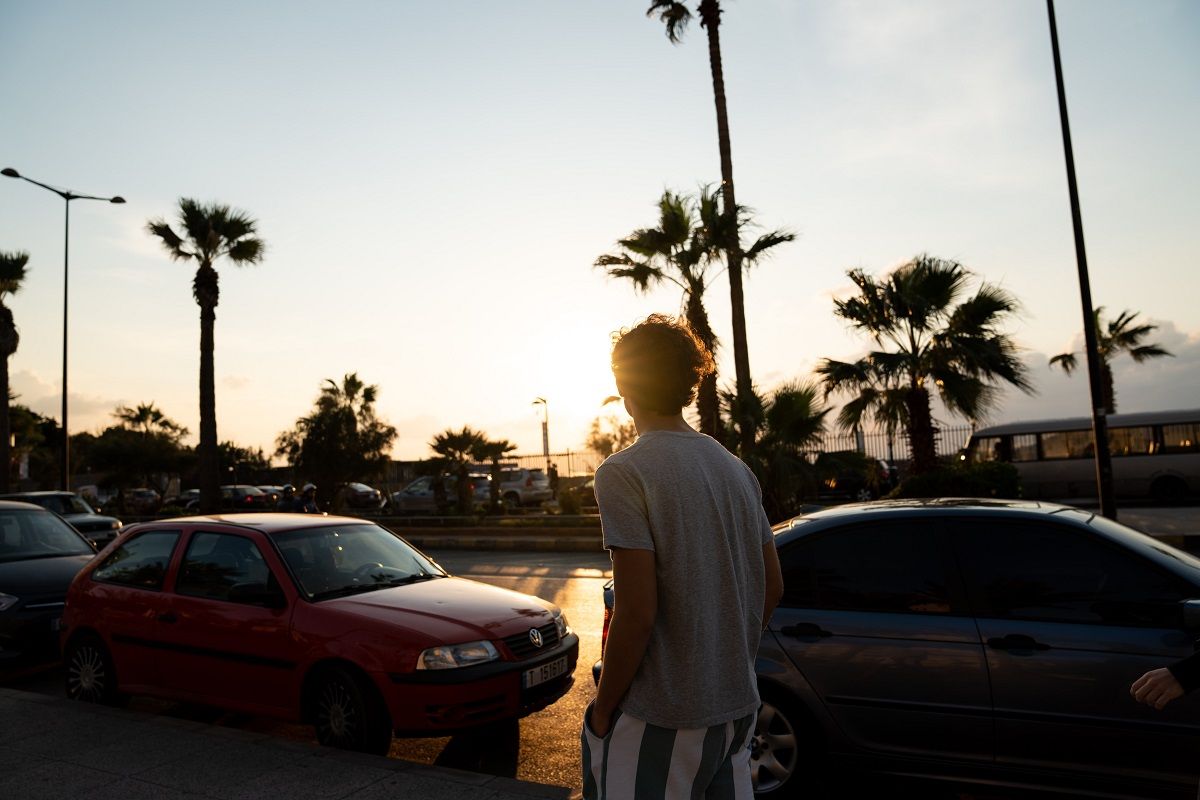 Fifty years ago, Lebanon was “the Paris of the Middle East,” noted for its cultural blending of East and West and envied for its banking sector. Now, some Lebanese economists are fearing a future akin to Somalia. Since October, much of the wealth built in Lebanon since the end of the country’s civil war 30 years ago has revealed itself to be superficial, its unsustainable growth propped up by a Ponzi scheme run by Lebanon’s central bank. With the truth now exposed— and leaders continuing to act in their self-interest — the resulting crisis has all but completely severed the trust of the Lebanese people and diaspora in all levers of their once-prized financial system — its currency, its commercial banks, its central bank, and its presiding governmental system. The subsequent collapse has been in motion for nine months now.

To what degree any trust can be slowly rebuilt both internationally and domestically will determine Lebanon’s uncertain path forward. This may be contingent on progress in the country’s digital finance space, which likely has a role to play in rebuilding a more inclusive and responsible financial system thereafter — or creating a new financial order altogether.

A House Of Cards

Some Lebanese economists trace the country’s troubles as far back as the end of Lebanon’s 15-year civil war in 1990, when the government and central bank focused their economic energies on attracting foreign deposits from Arab businessmen and the Lebanese diaspora, who today outnumber Lebanon’s population by more than two to one. This plan worked on the surface, but it neglected the development of productive sectors of Lebanon’s economy, like agriculture or industry. As a result, the country imports 80% of its products, which over time created a massive import-export deficit, draining the country’s reserves. A profligate welfare system obscured the lack of growth and employment in areas like industry and agriculture.

Lebanon’s currency, the Lebanese pound or Lira, has been pegged to the U.S. dollar at a rate of 1,507:1 for years, backed by the influx of dollars brought into its banking system by tourists, Arab businesspeople, and the Lebanese diaspora. Beginning in 2016, in order to pay its growing import bills (and fund the government) Lebanon’s central bank stepped up its efforts to lure foreign deposits by offering unsustainable interest rates as high as 14% — which required ever-greater deposits to pay out such exorbitantly high interest. Speculative by nature, this money wasn’t being invested in Lebanon’s own economy, creating inequality leading to Lebanon’s top 1% earning 25% of the country’s GDP. Commercial banks who received deposits from abroad gave that money to the central bank in return for high-yielding government bonds. Awash in wasteful spending and corruption — Lebanon is ranked 137 out of 198 countries in Transparency International’s Corruption Perception Index — the government used this money to pay its own bills; meanwhile, the public debt climbed over the years to reach over 162% of GDP today, the third-highest ratio in the world.

Cracks in the scheme emerged last year, beginning with a dip in remittances, which account for 12.5% of GDP and act as a critical source of U.S. dollars. A subsequent proposed tax on WhatsApp calls to pay for the government’s debts sparked massive protests. Money transfer businesses were then ordered to distribute money only in Lebanese pounds as the government began printing money out of desperation. But despite dwindling foreign reserves, the official Lebanese pound-to-dollar pegged rate remained unchanged, leading to dollar shortages and a black market for U.S. dollars which increasingly devalued the Lebanese pound relative to the dollar.

COVID-19 has predictably devastated Lebanon’s economy even further, particularly damaging tourism, the country's most important non-banking sector. Thousands have been laid off, and the pandemic’s global economic effects make the prospect of receiving foreign aid even more difficult.

But even before the pandemic, the entire banking system was experiencing a systemic failure as local banks limited and eventually altogether prevented Lebanese citizens from withdrawing U.S. dollars from their accounts, instead distributing only Lebanese pounds. Though the official rate has remained unchanged, in real terms, the Lebanese pound has now lost over 80% of its value year-over-year, wiping out purchasing power and sending inflation to over a 50% monthly rate. The risky intertwining of government, central and commercial bank balance sheets has precipitated a collapse in all levers of the financial sector and spawned a hybrid of payments crisis, a currency crisis, a public financing crisis, and a banking crisis. The World Bank estimates 75% of the population could soon be in poverty. 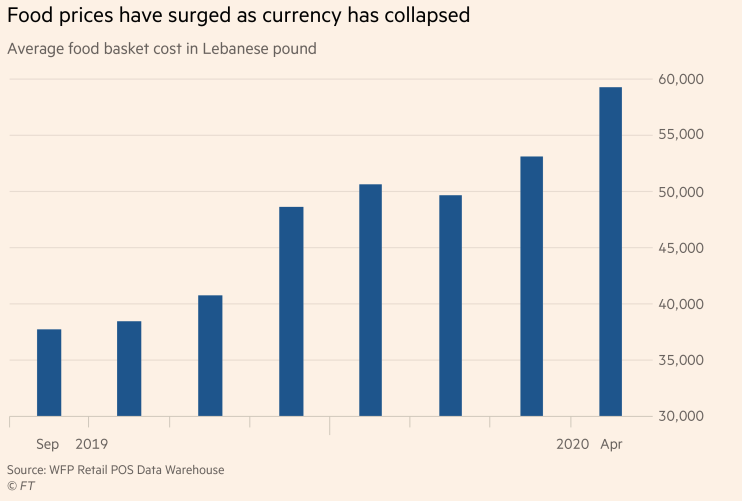 For Pennies On The Lira

In economic meltdown since October, mass protests have led to commercial and even central bank buildings being set on fire by citizens angry that Lebanon's banking sector and government used the nation's wealth to pay off their own debts and malfeasance. The government began to default on its mounting debts in March.

The government has rejected calls for structural reform like privatizing state-run utility services, and resisted oversight from international auditors that may rid the system of corruption and its enabling figures — including those currently empowered. The government in April unveiled a plan to institute reforms such as merging banks, slowly creating inflation and installing official capital controls. While it was an ambitious plan, many were left skeptical of its actual implementation, viewing it as a gambit to attract external help. But the IMF has learned from past examples (like Argentina) not to merely take a government at its word. After weeks of negotiations, talks with the IMF have stalled, with one source saying “no one wants to reform, and every party is serving its own interest while letting the country burn.”

A deal with the IMF of $10 billion would signal to other international donors (who previously pledged an additional $11 billion in aid contingent on reforms) that Lebanon is on the right track to institute reforms and create a stable economic trajectory. With Lebanon’s own reserves all but drained and its citizens unable to extract from the financial system their own money at a fair market rate, an international rescue package is likely the only way to counteract Lebanon’s death spiral. However, many within the country have already lost faith in the ability of the government — whose actors were often those enriched by the system of corruption — to enact serious reforms and get a deal done.

While it may be tempting to make comparisons to countries which experienced their own fiscal, debt, or monetary crises, Lebanese economists are hesitant to draw any immediate comparisons because of just how wide-ranging this systemic failure is, both economically and politically. But in looking at what might happen in the event that a deal does not materialize, Lebanese economist and professor Simon Neaime pointed to examples where international aid money didn’t rescue countries going broke, like Venezuela and Somalia — cases which resulted in failed states. With all trust lost in government and the banks, Neaime believes the situation could continue to deteriorate until true rock bottom. Only then will the recovery begin in some form.

I believe a new financial order will have to emerge. The banks and the government think otherwise, they want to keep alive whatever we had before at the expense of the savings of the Lebanese and the expense of their deposits, purchasing power, etc. But something new will emerge — we cannot go on with the old regime or the old system.
Simon Neaime, Professor of Economics and Finance, American University of Beirut

While Lebanon's situation is uniquely compounded by its range of systemic failures — including a debt crisis, a fiscal crisis, a monetary crisis and a confessionalist form of government rife with corruption and which makes decision-making particularly difficult — what the country has in common with other systemic economic failures is a loss in public trust in the country’s financial order. Mondato has investigated other examples like Argentina and Venezuela wherein currency crises compelled increasing adoption of alternative payment forms, with cryptocurrency in particular garnering attention. In Venezuela, where an IMF rescue never came as hyperinflation rendered local currency essentially worthless, over 20,000 shops and enterprises now accept crypto as payment.

Indeed, as the crisis has worsened, many Lebanese have sought to take their money out of Lebanon’s financial system, either by investing in assets like luxury items or real estate — which is booming — or by departing the country altogether. Bartering is increasingly commonplace. Cryptocurrencies have seen a rise in usage, too, with Bitcoin at times purportedly going for almost twice the exchange rate compared to elsewhere. Considering that trust in the government and financial system is all but lost, crypto offers a logical (if unorthodox) alternative.

But despite headlines proclaiming this to be crypto’s moment in Lebanon, insiders describe the crypto scene as remaining quite niche and largely confined to those who were already engaged in crypto trading prior to the crisis. Cryptocurrency is technically illegal in Lebanon, and Lebanese banks close the accounts of those found using their money to purchase crypto assets. Even with the prevailing shortage of foreign currencies, it is still just as hard to obtain Bitcoin as it is to obtain U.S. dollars — especially considering that the most affordable method of obtaining Bitcoin is through USD. 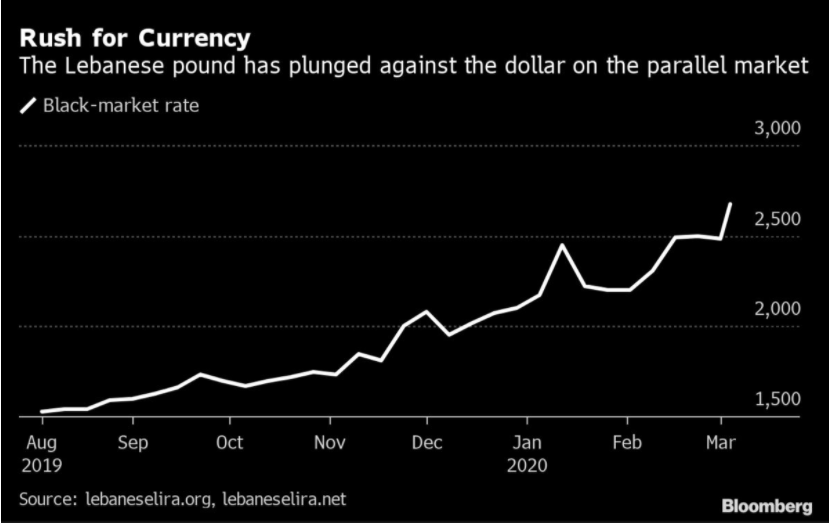 However, according to Patrick Mardini, a finance professor at Balamand University who closely follows Lebanon’s crypto world, this dynamic preventing accelerated Bitcoin adoption may change dramatically if rumors prove true that banks will soon begin to freeze 50% of U.S. dollars entering the Lebanese banking system from remittances overseas. These so-called “fresh dollars” may suffer a similar fate as so-called “lollars” — the street name for U.S. dollars that are stuck in Lebanon’s banking system under informal controls, and which can only be withdrawn as lira at a fraction of the original value.

The day banks put some restrictions on fresh dollars coming in from abroad, I think there will be a serious [crypto] market in Lebanon. Crypto might become a safe haven for transfers as people know the entire crypto will arrive [in] Lebanon and nobody will take a big chunk of it along the way. Because it can be done peer-to-peer, it is very hard to be controlled by government.
Patrick Mardini, Professor of Finance, University of Balamand

As with so much in Lebanon currently, none of this is certain. As unlikely as it appears under current leadership, trust can be regained through extensive reforms or a complete overhaul of the system. Doing so would allow for an IMF deal and additional donors to enable a positive recovery. Those within Lebanon’s private sector development field — struggling to accomplish much of anything at the moment — suggest this could eventually become an opportunity for Lebanon to rebuild its financial sector and even integrate digital financial services, which had never been granted the attention they deserved during boom times, when banks were busy profiting handsomely from wealthy depositors.

But promising signs are currently as scarce as greenbacks on Lebanon’s streets. Barring positive developments, the country is increasingly at risk of becoming a failed state, with numerous potential geopolitical complications in tow. Where the international community and Lebanese people’s trust strays in the eventual aftermath will crystalize what the country’s economic path looks like, whether as a rebuilding society investing in productive industry sectors and a 21st century digital economy, a crypto-dominated wasteland, or something in between.

There's Something About Jio

Democratizing Risk: Are Stocks An Instrument For Inclusion?