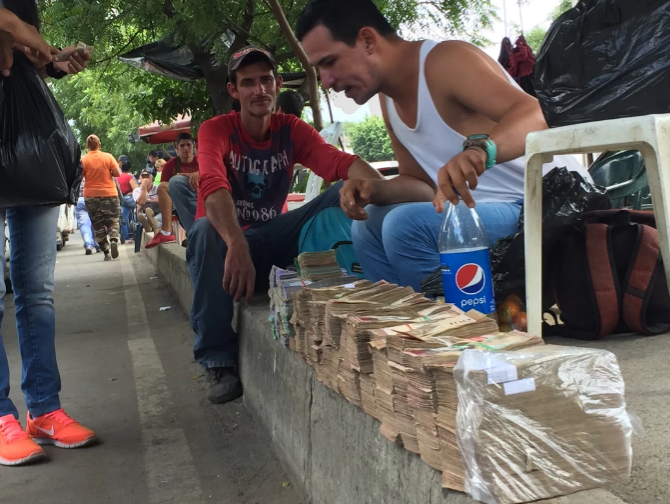 As of December 3rd, 2016, Venezuela became the 57th historical episode of hyperinflation, which has precipitated the country's continued two-year unraveling. For the Venezuelan population, the aftermath of this abstract phenomenon has left reeling, tangible misery. Between the ensuing price hikes and liquidity crisis, little faith remains in the Venezuelan Bolívar as either a preserver of value or a medium of exchange. Short of the policy that might act as a tourniquet to Venezuela's bleeding - dollarization, for instance, stabilized the Ecuadoran economy in 2000 - digital solutions are bandaging the day-to-day. While electronic money and wallets, similar to Zimbabwe, are softening the impact of the cash crisis, digital exchanges that trade fiat and cryptocurrencies are providing a means to saving wealth not under siege.

Facts On The Ground

Plotting the death of the Venezuelan Bolívar has largely fallen under the domain of academics, like Steve Hanke, who specializes in troubled currencies and hyperinflation. Banco Central de Venezuela has proven itself politically-motivated and essentially useless, as it files away unflattering data. In fact, between December 2014 to January 2016, only one data point (Quarter 3, 2015) was published. Since then, the Central Bank has remained eerily quiet over data as the country sinks further into the crisis. With data scrapped together from the US Bureau of Labor Statistics and AirTM, Dr. Hanke pinned the annual inflation in Venezuela at 41,838 percent this June (there is dissension among economists over his approach and calculations). 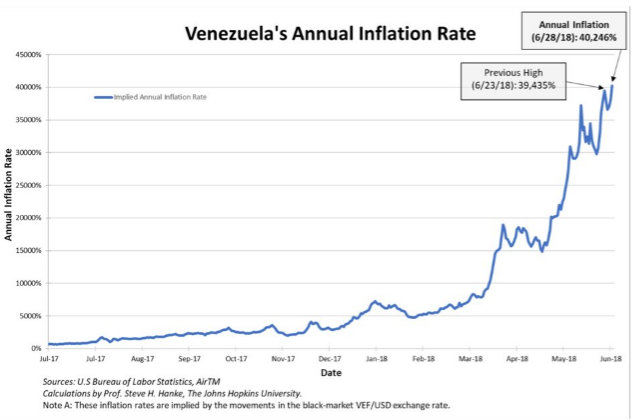 The theoretical roots of hyperinflation, as normalized by Milton Friedman, is a rapid increase in the money supply, usually the consequence of an overly 'print-happy' central bank. More recent literature has further zeroed in on this explanation, and concluded that a ballooning money supply is most disastrous when fiscal policy is clinging on by way of central bank note printing. Ergo, it is perhaps not the act of printing the money itself that leads to hyperinflation, but whether or not the government relies on said money to prop up itself, its initiatives and its deficits.

And while the inclination of Maduro's government to do exactly that has snowballed inflationary pressures, ground zero was the international implosion of oil prices in 2014. Approximately 95 percent of its export earnings are the result of oil revenues, so a drop in price quickly turned into a drop in foreign reserves. With little else produced domestically, and Venezuela's bargaining position in regard to cross-border trade depreciated, fewer and fewer imported staples graced the shelves for more and more money. Mismanagement of the oil industry has caused a simultaneous plummet in production, to the tune of 450,000 barrels per day in 2018.

For the average Venezuelan, the chaos unfurled seems to have no end. Shuttered shops, medicine shortages and an ever growing reliance on government programs like CLAP to procure food goods are the new normal. Before the currency devaluation, one chicken was reported to cost 14.6 million Venezuelan Bolívar, which in terms of the old 1,000 banknote weighs 14.6 kilograms! It might as well cost a literal arm and leg. 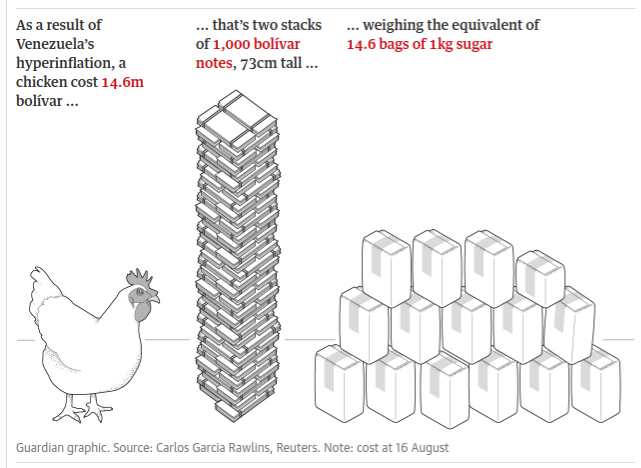 Hyperinflation, too, has caused price and exchange rate disarray at the local level, now heightened with the introduction of the new currency that lops five zeros off the Venezuelan Bolívar. Merchants are unsure how to sticker their stock and the conversion rates are often over the heads of everyday consumers. In the digital age however, there is little excuse for the information black hole further disheveling the country's already trying situation. It was this thought process that drove Girish Gupta, a long time journalist in Venezuela, to aggregate exchange rates among other indicators for himself and the general public (it was re-purposed into a platform, and Datadrum was officially launched earlier this year). The Billion Prices Project has similar intentions. Information sharing mobile apps such as Abasteceme, in comparison, communicate the once seemingly mundane, like where to find toilet paper.

Put It On My Card

Since the Venezuelan currency's redenomination, ATMs have a strict withdrawal limit of 10 Bolívar, an amount that is one fifth the cost of 9 eggs. A tiny silver lining to the country's legacy as an oil-rich rentier State (whose over-reliance on the stuff in part led to the collapse) is perhaps the relatively developed financial infrastructure and high bank account ownership, which stood at 73 percent last year. Many of those bank account holders have become heavy credit and debit card users, mostly out of necessity. 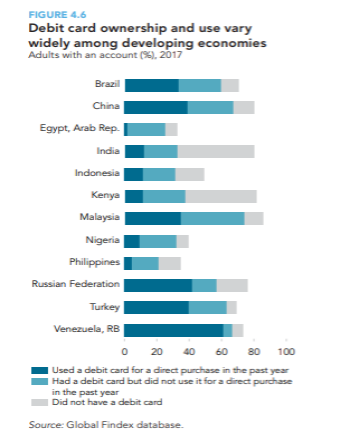 "República Bolivariana de Venezuela stands out for very high debit card ownership and use — nearly universal among adults. A key reason is that the country’s economic challenges have led to a severe shortage of bank notes, so that out of necessity many people making a purchase use a debit card whenever possible." The Global Findex Database 2017

The hasty dumping of thousands more of transactions on to Credicard's network, the largest in Venezuela for card payments, has hardly been without incident though. Outages are common, and the most notorious episode culminated in Maduro's government accusing and imprisoning some of the consortium's directors for deliberately 'promoting a system failure in their online payment services' in a bid to undermine the government. The endless number of zeros also frazzles point-of-sale machines, with customers sometimes swiping their card multiple times in smaller installments for one purchase.

The ruling party has spun it as a break to steer the country to cashless, and banks are under pressure to rollout person-to-person and person-to-business apps if they haven't already done so, like PagoMóvil from Banesco, or Tpago from Mercantil. Maduro has floated a target that 95 percent of all transactions are to be carried out electronically by the end of 2018.

These initiatives are fruitless to the unbanked, who often have to swallow a 100 percent premium when desperate for hard currency from hustling cash dealers. Mobile wallets like Vippo, however, hope to render electronic payments accessible to a more diverse user-base.

To register an account, Vippo merely requires a name (verified via electronic submission of identification) and mobile phone number. While a banked constituent can initiative a transfer from his or her bank account into Vippo's bank account, which is then credited to their wallet, someone who is unbanked can ask a teller at any participating bank to re-enact the same steps through a cash deposit. At an on-boarded merchant, payment is facilitated through either the mobile app, SMS or website. Mobile wallet solutions are also cheaper and easier to implement at point-of-sale versus credit or debit card readers, potentially solving the conundrum as to how to promote merchant acceptance for penny transactions like the bus, a coffee or a parking spot.

When Crypto Is The Safer Bet

Digital payments are all well and good as a makeshift fix for the cash crunch, but they do little for the rabid, ongoing devaluation of the Venezuelan Bolívar. In the case of Venezuela, the swings of cryptocurrencies pale in comparison to the instability of the nationally backed fiat. Peer-to-peer exchanges, like AirTM and Paxful, empower Venezuelans to stock up on USD and crypto through a number of payment methods, including the unorthodox like giftcards. (To understand the mechanics of how this is possible, see here or here. Over the course of a trade, AirTM escrows USD while Paxful escrows Bitcoin). Just before the forced redenomination, LocalBitcoins, another peer-to-peer exchange, posted record trading volumes in Venezuela.

Even lesser well-known tokens, like Dash, have found a stronghold in the country. With each passing week, nearly 200 new merchants have signed-up to accept the altcoin, incentivized as they are by the tens of thousands of Dash wallets downloaded monthly and the modest transaction fees. In response to its overnight popularity here, Dash has released the public beta of Dash Text which allows a user to command his or her wallet through SMS, an important step to reaching Venezuelans with neither internet nor smartphones. This will become increasingly relevant as the mass Venezuelan migration - equivalent to a mind-boggling 7 percent of the country's population - and following diaspora shape cross-border remittances.

And while digital can treat the symptoms of hyperinflation, the cause still feverishly rears beneath the surface. Maduro has dug in his heels and spat in the face of most international best practices, whether that be dollarization or a cap on the financing of public debt. Instead, he has committed to redenomination and tethering the sovereign Bolívar to Petro, the State's cryptocurrency purportedly worth one barrel of oil (approximately 60 USD). If that doesn't work, those with actual crypto experience will be waiting for the moment when a full-on meltdown by the State delivers its own revolution, resulting in a mass exodus away from fiat.

There is a massive opportunity that awaits in Venezuela to be the first closed loop crypto-economy. Ray Youssef, Chief Executive Office and Co-Founder at Paxful

Women “Rise Up” To Address Gender Imbalance In Fintech