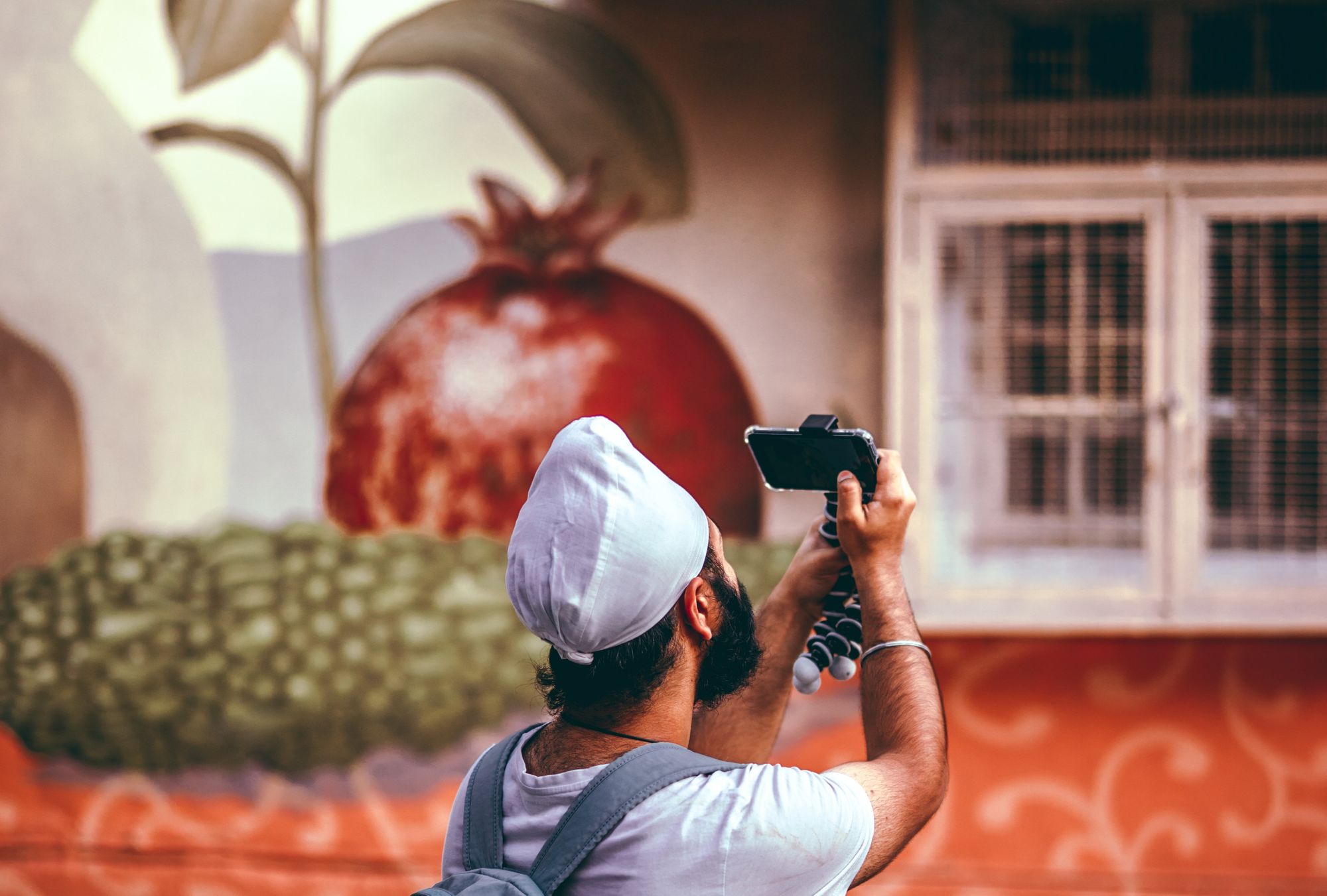 Artists, musicians, writers, filmmakers and other creatives struggle every day to be equitably compensated for their labor. Quite recently, fintech companies have begun to ameliorate this issue by helping creatives build communities of support via what's known as the “membership model." Whereas in the early years of fintech, artists, entrepreneurs, and other creators turned to project-based crowdfunding platforms like Kickstarter and Indiegogo to connect with patrons, today’s creative class is making use of emergent new membership-based giving platforms.

These platforms are changing how creatives get paid by removing the obstacles to monetization and instituting transparency -- all while making use of the internet’s existing payments infrastructure. It's only fair: a teacher who creates language lesson videos or a cartoonist who self-publishes should have attainable, dependable revenue streams just like anyone else whose labor creates value. The membership model answers that question by creating an ecosystem where individuals can lend recurring financial support to the creatives whose work they appreciate.

The Nature Of The Struggle

Aside from the trusty hat-on-the-ground and open-guitar-case solutions, a few avenues exist for digital creatives to earn direct income for their labor. Many independent creative professionals rely on ad-based platforms like Youtube and Spotify which collect revenue from ads and pay dividends to copyright owners. The math, however, makes it difficult for creatives to earn a living from these platforms. For every 1,000 plays that a song attracts on Spotify, the platform pays between USD $6 and USD $8.40; this payment, however, may be shared between the record label, producers, songwriters, and other contributors to the song in question, leaving little for the artist. Youtube is arguably less generous to creatives; assuming a channel qualifies for YouTube’s “partner program," the rule of thumb rate, according to a study by Mathias Bartl, on the platform is USD $1 per 1,000 views (though the figure can be as low as USD $0.35 and as high as USD $5).

True, ad-based platforms like these provide exposure for creatives which would be difficult to attain otherwise, but it remains almost impossible for an individual to make a living from these platforms even with said exposure. Bartl's study found that on Youtube, a channel attracting 1.4 million monthly views would bring in USD $17,000 per year. However, these figures would put that channel in the top 3 percent of earners on the platform — a segment which, incidentally, receives 85 percent of all views on YouTube. 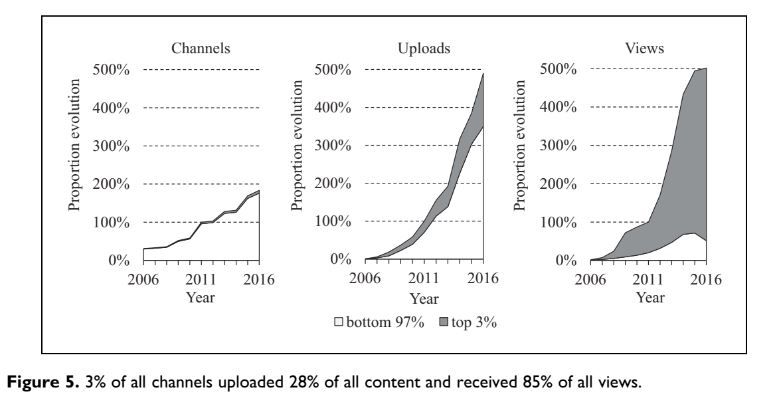 Enterprising creatives have found alternatives to ad-based monetization, but these methods are often not repeatable and therefore don’t comprise a complete creative ecosystem. Kickstarter, the project-based crowdfunding platform for “artists, musicians, filmmakers, designers, and other creators," has successfully connected more than 167,000 projects with almost USD $4 billion in funding since its launch in 2009. It follows the “all or nothing” model, which means that creatives specify a target sum for their project, and unless they achieve that target, the funding doesn’t go through.

Kickstarter has hosted more unsuccessful than successful projects by a ratio of about 60/40, with 12 percent of projects never receiving a single funding pledge. Among projects raising 20 percent or more of their goal, however, 78 percent were successfully funded. This suggests that when there is demand for projects, individual contributions can often lead to a sufficient payday for creatives. But paydays from project-based platforms are few and far-between, and there is no guarantee that a Kickstarter project will reach 100 percent of its target and actually pay out.

Platforms like Kickstarter may in fact be better-suited to entrepreneurs trying to fund a fledgling business or execute on a single major project. So while ad-based platforms provide a trickle of income and crowdfunding provides income in big, uneven splashes, neither answers the need for reliable revenue streams that professional creatives crave.

A new compensation model altogether has emerged in response to the need left unaddressed by both ad- and project-based platforms. The membership model, as it’s come to be known, has been embraced by platforms like Patreon, Podia, Buy Me A Coffee, and Liberapay. These platforms want to empower creatives to build communities of supporters who each donate a monthly sum, frequently in exchange for exclusive content or other perks. The model provides real revenue (100 community members each giving USD $5 monthly is, in theory, equivalent to the ad revenue from a half-million views on Youtube) and is also predictable and repeatable. With the direct support of their contributors, creatives can focus on their craft — be it music, art, writing, podcasting, or filmmaking — while earning fair compensation.

The membership model also creates value for patrons who want to support their favorite creatives, and the key to this side of the equation is transparency. Patreon, for example, offers clear pricing tiers, ensuring that patrons know how much of their monthly contribution is going directly to the creative and how much is funding the platform. By keeping all parties apprised of where funds are going down to the cent, Patreon defangs concerns over greed and exploitation like those which have dogged Youtube.

The company appears sensitive to public perception; in late 2017, Patreon announced a pricing change which received enough backlash that CEO Jack Conte apologized, eventually scrapping the plan. Because success for membership-based platforms depends so heavily on voluntary, enthusiastic participation by patrons and creatives alike, keeping the community happy is as much a requirement for Patreon as it is for any of the creatives on its platform.

From a payments standpoint, the platform does not do anything fancy. They accept all major card networks, plus Paypal, and charge a flat (tier-dependent) fee in addition to the cost of processing. There is fine print involved — an additional 1 percent fee is applied to PayPal transactions originating from outside the US, and Patreon charges different fees depending on whether a payment is greater or less than USD $3. Additionally, creatives who want to be paid in a currency other than USD must receive payouts via PayPal or Payoneer, both of which entail additional fees.

Patreon is both the most widely-used and longest-running membership platform, hosting more than 130,000 “creators” with at least one patron: 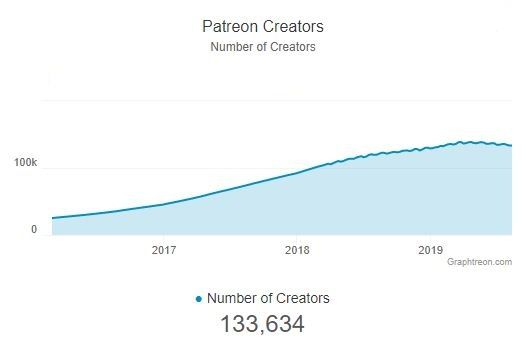 The platform’s highest-earning creators (who earn in the tens of thousand of dollars each month) appear to be based in North America and Europe (per Graphtreon). But Patreon also presents an opportunity for organizations in emerging markets like Colombia Reports, according to its Editor-in-chief.

“I believe many independent news websites, including mine, wouldn't exist if it weren't for Patreon. While I do have to spend time on marketing instead of journalism, which I dread, I believe Patreon gives me the freedom to pursue news that's actually important for the public rather than content that attracts a lot of visitors. This means I can publish about commercially unsound issues like corruption and politics. This possibility didn't exist before.”Adriaan Alsema, Editor-in-chief at Colombia Reports

For Colombia Reports, having a member base who contributes a steady, dependable flow of income allows the organization to produce content that they believe to be important and impactful. In exchange for their contribution, Patreon subscribers of Colombia Reports gain access to a special newsletter and select deep-dive content depending on their level of support.

But community members don’t always demand rewards; creatives can also use services like Buy Me A Coffee to accept recurring or one-time donations from fans simply on the basis of their work. Buy Me a Coffee claims that creatives who use their service report a threefold increase in contributions over a standard donate button, and further contend that “BMC” is a natural complement to Patreon-style membership services because it enables one-time contributions. There’s no actual coffee involved, but by framing payments in these terms, the company creates a social interaction between creatives and fans. Buying a coffee is something one does for a friend; using the platform likely helps fans feel closer to their favorite creatives (although behind the scenes, the transaction is nothing more than a simple payment).

And therein lies the magic of these platforms. They aren’t an evolution of any payment system, technically speaking, but they still manage to create value and improve engagement. By framing payments between fans and creatives in social terms, membership-based platforms transform content creation into a viable pursuit with the potential to create a predictable and sufficient revenue stream.

There is significant value, too, in the turnkey nature of these platforms. Could organizations like Colombia Reports recruit and manage their own subscriber base, as some major publications do? The New York Times, for example, somehow found 4 million readers willing to subscribe to their services. For smaller organizations who lack the in-house marketing and web development muscle to execute a full subscriber-recruitment push, membership platforms like Patreon fulfill the same purpose without requiring the organization to divert much time or energy away from creating content:

“Most importantly, I am not paid by and do not respond to anyone but the public, which makes me truly independent and free of any commercial bias. Similarly to pre-internet newspaper business models I financially rely on reader subscriptions, but contrary to pre-internet business models, my news is available for all. People who can afford it subscribe, those who can't [despite having the same need for information] don't.” Adriaan Alsema, Editor-in-chief at Colombia Reports

So not only do benefactors support work which they believe has value, but they make it increasingly available, in an independent form, for others. It’s a win-win.