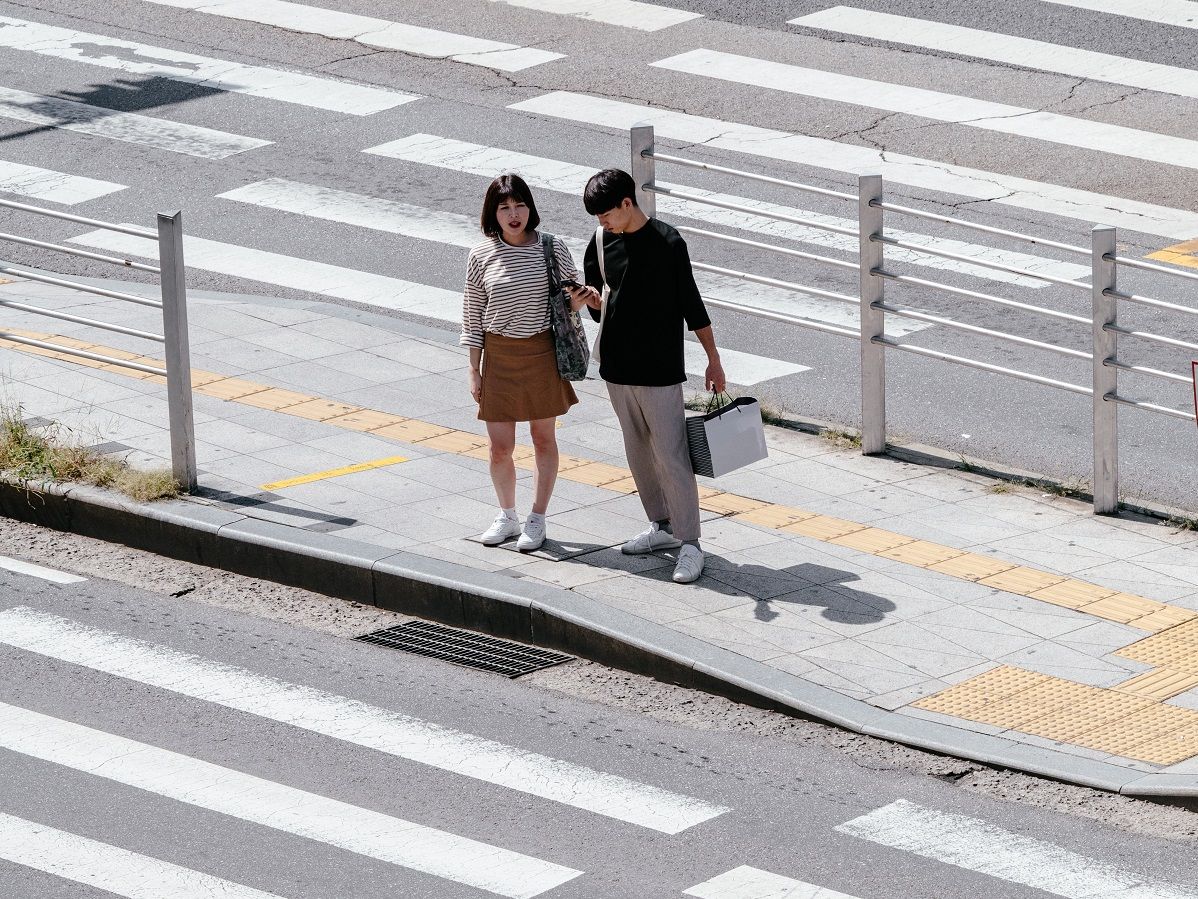 In East Asia, restarting the economy is turning out to be a slow, gradual process. Social distancing and other precautions are still in place, but businesses are reopening and people are going back to work. Granted, there is no one-size-fits-all solution for “how to reopen an economy,” but the Chinese and South Korean experience may provide the rest of the world with some insight. How does reopening work? What can businesses and individuals expect? And what can be learned from these early examples of emergence from COVID-19-related restrictions? Furthermore, many have speculated as to this crisis’s potential to create lasting changes in people’s behavior – particularly with respect to adoption of digital tools. As the rest of the world prepares to launch its digitally-enabled recovery, East Asia may hold answers to our most pressing questions.

COVID-19 first appeared last December, in Wuhan, China, marking the beginning of a global pandemic that would end up shaking the world economy. Insofar as official COVID-19 figures reported by the Chinese government are concerned (though some studies have suggested that the Chinese cases may be be vastly underreported), by late March, Chinese officials reported no new cases in the country. In the spirit of moving forward, the Chinese government’s mantra for the past month has been “Fugong Fuchan,” which translates to “resuming work, resuming production.” To push rapid economic recovery, the government has been putting people back to work, reducing taxes on businesses, and providing direct aid to companies where necessary.

Despite these moves, however, many social distancing mandates remain in place in China. Officials are still urging people to remain home as much as possible. Eating on public transit is (sensibly, COVID or not) banned, and anyone caught spitting in public could incur a fine. Public places, including businesses like grocery stores, must mark social distancing lanes to keep people at least a meter apart from each other at all times. On April 27th, students in several provinces were allowed to return to schools, but with stringent rules in place: students must wear face masks at all times, class sizes are being reduced, and meal times are being staggered. In particular, reopening cultural venues where masses gather has proven something of a rocky, trial-and-error process. Shortly after cinemas and karaoke bars tried to (legally) reopen in Sichuan and Liaoning provinces, the Chinese government forcefully shut them down again, reportedly even interrupting patrons mid-song.

After China, South Korea was host to the first large documented COVID-19 outbreak. South Korea, like Taiwan and Singapore, did not implement full lockdown policies throughout the crisis: while large gatherings like religious meetings and sport events were banned and schools were closed, most restaurants and shopping malls were allowed to stay open. A recent new spike in cases aside, South Korea has handled the pandemic well, containing the virus's spread and limiting deaths through mass testing and digital surveillance; as of writing, total cases are just under 11,000. During the last week of April, the Korean government lifted some of the restrictions on mass gatherings, and a growing number of companies are recalibrating their extant work-from-home policies. 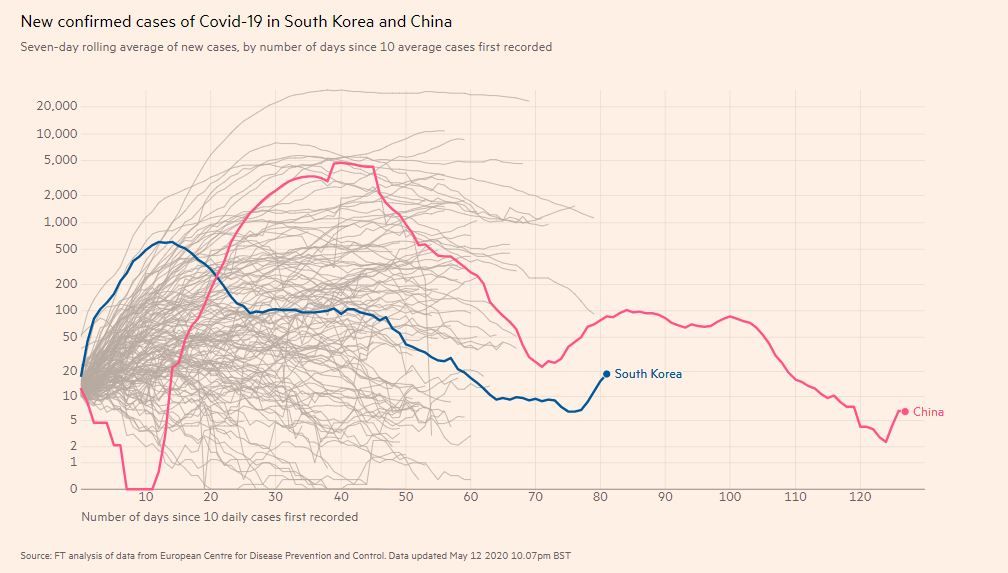 But according to Jae-Myung Park, Managing Partner of a large Seoul-based law firm, South Korea’s reopening still remains quite limited, and government officials are still being very cautious about the renewed outbreak. At his firm, people have mostly returned to work, but they are limiting employees travel and face-to-face meetings. Courts have reopened for trials, but those who enter court buildings have their temperatures checked at the entrance. With these and other measures, South Korean health officials will continue to try to limit COVID's spread for around a year, at least. Vice-Health Minister Kim Gang-lip said in a briefing: “If we let our guard down in social distancing, (the virus) could come back and greatly hurt and endanger our society."

No Delaying The Digital

One possible key takeaway from China and South Korea’s reopening experiences is that social distancing measures are likely to remain in place, in some form, for a prolonged period of time. Several months of such measures may prove long enough to instill new habits in people whose forced exposure to digital finance during the pandemic may lead to long-term changes in attitudes toward their finances. In China and South Korea, for instance, anti-COVID measures have hastened society’s move toward digital finance and, eventually, cashless society. South Korea saw jumps in usage of mobile banking applications by 85 percent from December of last year to March of this year, and in April,the Chinese government launched a much-awaited digital currency in four cities, in an attempt to push the nation to become the first cashless society.

But is this shift taking hold across the globe? A poll by Mastercard attempting to study the change in consumer behavior during the pandemic found that contactless transactions grew by 40% globally during the first quarter of 2020. Of those surveyed, 75 percent also indicated that they will continue to use contactless payment after the pandemic is over. Sandeep Malhotra, Executive Vice President of Production & Innovation Asia division at Mastercard noted, “The fact that 3 in 4 people intend to keep using tap-and-go after the pandemic is a strong sign that consumers see the long-term benefits [of contactless payment].”

It's not just contactless payments that are growing. Digital payments pioneer PayPal reported adding 7.4 million new active user accounts in the month of April – a new monthly record. Even in the U.S., where consumers have lagged in fintech payments adoption, a recent survey of 361 small businesses found that 27 percent saw an increase in customers using electronic payments like Apple Pay since the COVID-19 pandemic began.

One potential reason that South Korea and Taiwan have been successful in containing the pandemic is the more sophisticated version of smartphone contact tracing that these countries adopted to help officials immediately alert citizens who may have been in close proximity to the infected. Along with GPS tracking, camera monitoring, and bank records, digital payment histories have also played a crucial role in these Asian nations’ (evidently succesful) contact tracing efforts.

According to the World Health Organization, the ability to trace every infection must be met before societies reopen. The growing global consensus seems to be that the best way to fight the pandemic is to aggressively track and trace infected individuals, and as a result, some analysts believe that less privacy and more liberal use of personal data may become the “new norm.” It shouldn't surprise anyone, then, that the pandemic has resulted in policies and regulations being accelerated around the use and collection of personal data.

Already, big tech and fintech firms have played key roles in the reopening of East Asian economies. WeBank (the digital bank started by Chinese tech giant Tencent) is helping the Chinese government monitor the progress of reopening by leveraging its access to geolocation data to ascertain whether, where, and when people are moving again. The Chinese government is also requiring people to use a smartphone application called “Alipay Health Code,” to keep track of who should remain in quarantine as the economy slowly reopens. Residents sign up for the system through Alipay, a popular wallet app in China, and are assigned a color code that indicates their health status. 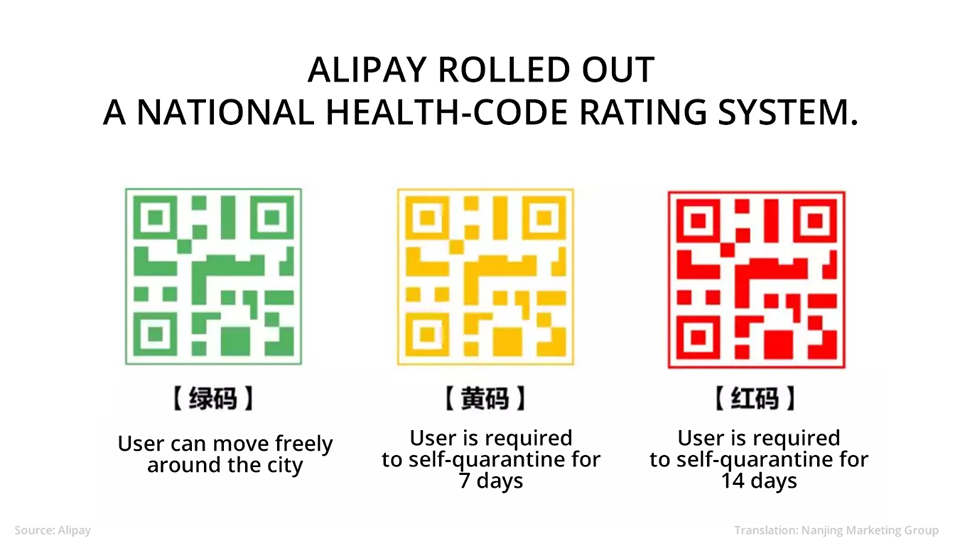 How the COVID-19 pandemic will shape the future of tech and digital finance will vary from region to region. In the U.S., for instance, a privacy-conscious culture makes it less likely that people will accept privacy compromises and enhanced surveillance as the new norm: a recent poll found that a plurality of respondents strongly opposed using mobile device data to fight the pandemic. In Latin America, criminal activity, such as drug dealing and human trafficking has found a way to adapt to the pandemic and has begun leveraging fintech platforms as channels. Such developments could become hurdles for the growth of the fintech sector in some countries, if it is shown that digital tools are not passing KYC or anti-money laundering muster. Meanwhile, some African nations have found fintech tools to be helpful in fighting the pandemic. Ghana, for instance, has been encouraging the use of digital payments to reduce the spread of the virus.

There is no one-size-fits-all approach that will work for every country when the time comes for them to reopen. Different cultural norms and population characteristics mean that no nation can emulate China's or South Korea’s methods exactly. That said, it is important to observe these early cases and take note of what a relatively successful handling of the reopening process look like. After all, China and South Korea have managed to contain the pandemic with relatively few fatalities, despite being the first ones to be hit by the novel virus. And according to David Kelly, chief global strategist at JPMorgan Asset Management, “overall outlook for East Asia is quite good relative to other regions of the world… in economic terms and probably in market terms in the second half of 2020.”

These example from East Asia demonstrate that varying degrees of social distancing measures will likely have to stay in place for a prolonged period as economies gradually reopen. And even as reopening gets underway, stops and starts are likely. But: the post-COVID-19 world is likely to be more digital in many ways, and people’s attitudes toward digital finance may undergo a necessity-driven transformation. The industry, no matter in which country, should be ready to leverage this opportunity for long-term growth and adoption, as the world prepares for the return to something like normal over the months to come.

The Death Of Cash: Greatly Exaggerated?

The Youth In Emerging Markets: A Segment At Risk