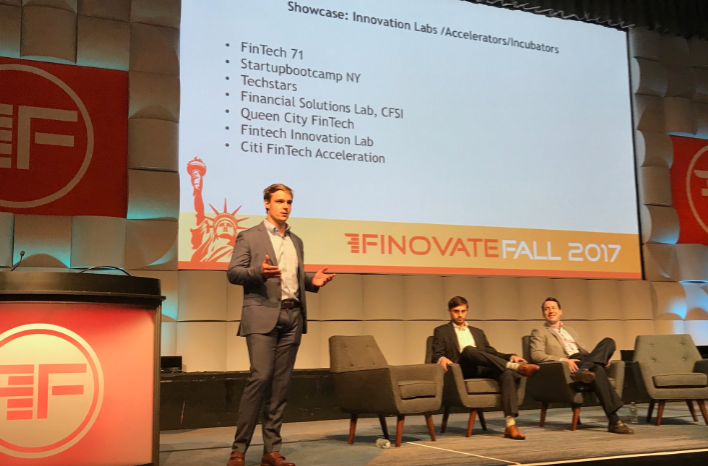 The discourse around fintech has a habit of wrapping it in an angelic-like glow. On the surface level, digitization promises financial institutions a way to provision services at a lower price point, which then renders un- or under-banked consumers a more appealing business case. What better litmus test, then, than Finovate to investigate whether or not the ethos of financial services (and the innovation behind it) is truly committed to roping in previously ignored segments? Or, conversely, is fintech merely appropriating the buzzwords of financial inclusion as a PR savvy spin to re-brand an industry sullied by bad behavior (Lehman Brothers, Wells Fargo, Equifax) while still exclusively courting high-revenue clientele?

A Little Bit Of Introspection


The fire-side style chat prodded Jon Stein, the CEO and Founder of Betterment, on the conceptual unfolding of his 'baby' - a robo-advising investment platform that curates investment portfolios for a fraction of the fees charged by old-fashioned brokers. He brought to light the conflict between traditional financial services and the intellectual re-calibration epitomized by fintech in one observation.

"I knew it was going to be about making it better, which had given me the name Betterment. We wanted to start with the customer, and what the customer wanted, diverging from the way mutual funds or banks think about selling products." Jon Stein, CEO and Founder of Betterment

The rigidity of product definitions - and the tethering of legacy financial institutions to those definitions - has paralyzed their ability to serve clients that, while once outside of scope, are increasingly reachable thanks to technology. It was a theme that popped up over and over again. So, how are fintechs bridging that gap and fostering inclusive finance through customer-first, product-second innovation?

The Gig Economy... Gigging Out?


While the Gig Economy may usher in a new era of flexibility, income stability - at least on a monthly basis - may be out the window and an accidental externality. This ingrained cyclical imagining of income has hardened product silos, especially by way of credit, micro-loans or deposits.

Overdraft fees are one residual artifact of this kind of salary set-up that is derailing contracted workers. Salaryo is remedying the ups and downs of freelancers by re-thinking the number zero. Yair Levy, its respective CEO, considers financial life to be on a continuum that isn't dictated by arbitrary beginnings and ends. Instead, his inspiration for subscription based credit culminated in a product where a balance above zero isn't tied to a fixed due-date (for a mere 10 dollars a month, no APR).

Rachel Schneider of the Center for Financial Services Innovation (CFSI), too, emphasized some of the inadequacies of formal banking in this regard.

"It is hard for incumbents to contemplate genuinely new products. Today, existing credit models are a lot less effective in the context of the gig economy, and tend to encourage over-indebtedness." Rachel Schneider, Senior Vice President of the Center for Financial Services Innovation (CFSI)

On paper, volatile work schedules might flag a risk to banks measuring pluses or minuses in the short term. Platforms like Salaryo, however, are putting that logic to the test, and creating models more aligned with long-term career trajectories.

Outside The (ATM) Box


Ironically, many within the fintech community either subtly or explicitly loathe the ATM as it enables the escape of currency from the digital ecosystem and de-incentivizes the recycling of digital funds. But, as consumers still have a strong appetite for cash, the breadth of ATM networks remains one avenue for financial institutions to differentiate themselves from the competition.

And while some ethical and financial inclusion-oriented questions linger about ATM placement choice and whether the socio-economic status of a neighborhood influences ATM usage fees (not to mention the disproportionate impact of those fees), it is through the ingenuity of fintech that the ATM has transcended a singular use-case.

Mastercard displayed in full force the continuing evolution of the ATM. Mastercard Cash Pick-Up was a glimpse into a world where ATMs are no longer off-limits to those without credit or debit cards. While it is true that the demo exhibited the use-case of most interest to the audience (emergency cash in the event of a lost card), the technology has the potential to redress a much more diverse subset of situations.

Emergency relief, government disbursements, insurance premium payouts, person to person transfers for the unbanked - the possible applications are abundant in nature. The implications, though, might be larger than a channel merely expanding its reach. What if, instead of viewing the ATM as an obstacle to or distraction from digital finance, it was regarded as a gateway? Daniel Goodman, Senior Vice President of Product Management (ATM) at Mastercard, hinted at flipping the status-quo reasoning on its head.

"At a high level, the path to financial inclusion includes the ATM. From our experience, handing someone a card doesn't immediately translate to purchases at a merchant. Conceptually, the first thing an unbanked card recipient does is confirm access to cash through an ATM. Then, as trust accumulates, their comfort with a more digital life also increases, as a confidence in liquidity is created." Daniel Goodman, Senior Vice President of Product Management (ATM) of Mastercard

From a go-to market perspective, the issuer behind the virtual card is a bank. Their partner, or contracted customer, might be a money transmitter, or it might be a government agency, which would then layer their services, or programs, on top of the banking infrastructure.

Products As A Service


Customer-centric approaches (versus product-centric ones) frame a mortgage, student debt, retirement or investment, as a longstanding process - not a lump sum to be reclaimed in parcels or tidy fee installments. As financial products become services, the number of (digital) touch points proliferate, and it organically fosters more involvement from the customer. The result, at least evidenced by Finovate, seems to be the introduction of more sophisticated financial services to consumers who have, typically, fallen by the wayside.

This especially shone through in investment-related showcases. Voleo, an app that enables social groups (like colleagues, family, peers) to form investment clubs, has coaxed a 'slow burn' kind of exposure. Thomas Beattie, the Chief Executive Officer of Voleo, revealed some of the domino effects witnessed.

"The opportunity here is for those that don't have the capital, the knowledge or the drive to make that initial investment. Voleo breaks down those barriers, and incentivizes pooling resources to both minimize trading commissions and maximize investment impact. From a more anecdotal angle, Voleo has encouraged transfer of knowledge (among and between generations) and empowered women to assume a more integrated role in the managing of household finances." Thomas Beattie, Chief Executive Officer of Voleo

Divy, another solution hopeful poised to 'democratize' investment and entice first-time investors, has crafted a compelling feature for the under-served. The platform allows investors to set aside small denominations (like five or ten dollar contributions) for their funds. Not only that, but those five dollar injections can buy a fraction of an equity. Heavy-hitting stocks like Google, Apple and Alphabet, which are often projected to appreciate, are no longer only the play-things of those willing to drop a grand for one share.

And while financial institutions have always had the gusto to convince patrons to sign away investment funds to their custody, product rigidity has again obfuscated the bigger picture as the needs of costumers shift.

Advisory services that hand-hold the accumulation of retirement savings are 'on every corner.' Advisory services that hand-hold the cashing out of retirement funds, however, are a rarity. Andrew Vincent, Vice President of Product at United Income, spoke to out-of-date industry standards, like the 4% draw-down rule or the 80%-of-your-salary spending replacement recommendation, which color retirement 'best practices.'

"Everyone can solve the problem of accumulation. But, until recently the technology just hasn’t been available to solve for de-accumulation. We had to build our own technology, from scratch, to model potential market outcomes in concert with possible life events. To do this right you need to test draw down strategies, Social Security claiming strategies, retirement ages, portfolio strategies, and more. We run a few million simulations instead of a few thousand. We have the technology and methodology to make this happen." Andrew Vincent, Vice President of Product of United Income

As facts on the ground change - like a steady stream of 10,000 folk joining the ranks of the retired a day - strict adherence to product definitions won't offer requisite flexibility. While fintech providers are picking up the slack, if these products are to achieve scale, financial institutions, too, must pledge allegiance to the camp of customer-centricity.

Financial Inclusion Is Not A Guarantee


Now, while most of the innovation here is promoting financial inclusion through the embrace of cutting-edge technology, alternative models or graduation methods that strengthen financial literacy, it is a happening that should not be taken for granted as a given. The Betterments of the world can easily retreat to the high-earner-not-rich-yet (HENRY) millennials or those on the precipice of wealth that, with digitization, become a particularly palatable customer acquisition target.

Even when products are commoditized into digital services, the financial industry still runs the risk of permanently side-lining the un- or under-banked. Marginal bumps in revenue or breaking even are not enough of a carrot to motivate banks and fintechs to put those plausible use-cases to work. It is on all of us to cheer on the community to actually lean-in on being the good guys (for once).

What To Do When A Credit Agency Equifax Up?