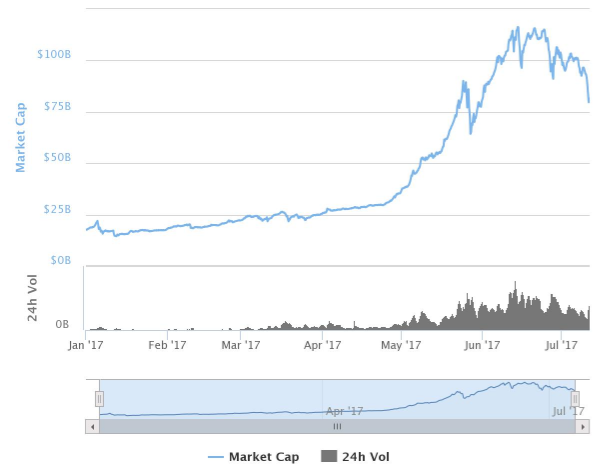 It was probably only a matter of time before the world of altcoins and cryptocurrencies produced its own funding model. Known as ICOs, Initial Coin Offerings are a new method of generating funds to back the development of new blockchain protocols and use cases that has exploded over the past year, in the process helping to push up the total market cap of cryptocurrencies (see chart above). This is starting to make many observers, from investors to regulators, nervous, as speculative money piles in to these unregulated offerings in a way such that fraud could be easy to carry out, and real risk even easier to hide.

The Scale of the Problem

Before taking a look at the underlying issues, it is probably useful to get a sense of the scale of what has taken place over the course of the past year. As you can see from the chart above, in the year-to-date, the total market cap equivalent of all cryptocurrencies has grown by 200% (and was at one point up over 300%). This has been driven by two, interconnected phenomena. The first is the surge in the price of Bitcoin itself that is to a large degree driven by speculative demand from Asia.

The second factor is the sheer proliferation in the number of new altcoins being deployed or proposed (an important part of the problem, to which we will return). Quite remarkably, despite the meteoric rise in its value, Bitcoin's share of the total market capitalization of cryptocurrencies was 80% a year ago; now it is less than 50%. And the source of much of this capital flooding into altcoins is the precariously named Initial Coin Offering (ICO).

One Letter Makes A Big Difference

Making an ICO sound rather like an IPO may have seemed like a smart bit of marketing when ICOs were drawing in rather small figures, but the explosion in ICOs and the enormous amounts of money involved have started to attract the attention of regulators in the U.S. -- specifically the Securities and Exchange Commission (S.E.C.). The latest (and still running until July 14th) ICO has proven to be the biggest of them all. Tezos is a "self-amending crypto-ledger" (a smart-contract platform) that seeks to compete with Ethereum.

It is difficult to say how much, exactly, in fiat currency the ICO will have raised due to volatility in the USD/ BTC USD/ ETH exchange rates (it currently sits around US$160m, and was pushing $200m just a few weeks ago). Ethereum's ICO, which raised US$18m in exchange for the first 60 Ether tokens, looks positively quaint by comparison, and it is little wonder that the S.E.C. is starting to pay close attention.


For their proponents, ICOs offer easy access to major amounts of funding, free from the "red tape" and oversight of regulators such as the S.E.C. They are able to do so because of the unique (and fairly ingenious) nature of "Initial Coin Offerings" that has them sitting closer to crowd funding mechanisms than IPOs (or so its cheerleaders maintain).

Rather than acquiring a security (with an expectation of profit from the commercial enterprise), investors in an ICO receive (in exchange for Bitcoin or Ether) new coins/ tokens (interchangeable in this context) generated by the blockchain platform/ protocol/ use case/ application in which they are investing. Thus, should the platform (such as Tezos's smart contracts) take off, Tezos tokens (known as 'Tezzies') will increase in value as more users join and use the platform. 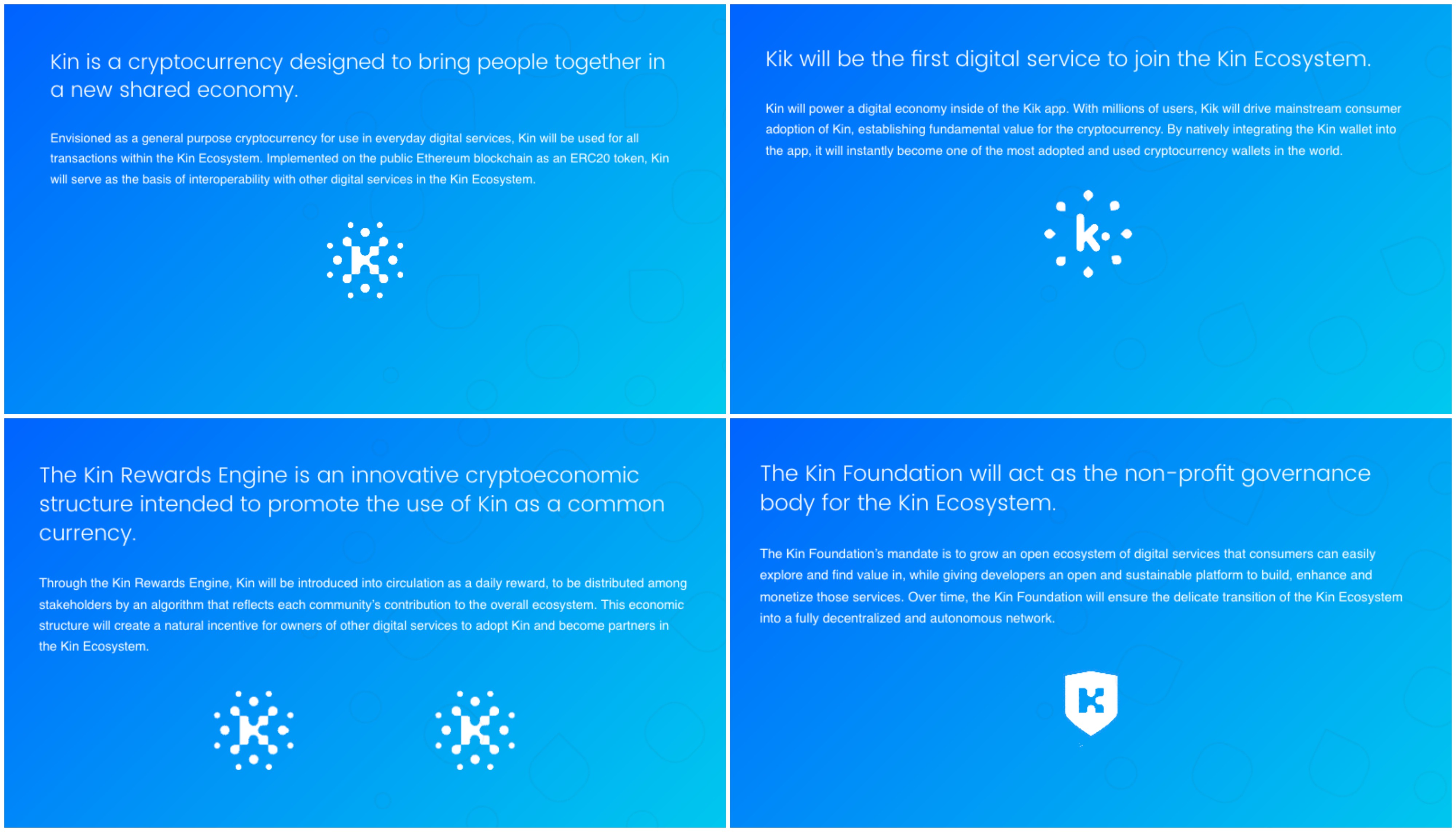 A less abstract example is the forthcoming ICO from the mobile chat app Kik, and the ICO for its new cryptocurrency called Kin. The team behind Kik is attempting to create the foundation of a "democratized" open-source ecosystem based around Kik and Kin (see what they did there?) built on the Ethereum blockchain.

Kin will raise funds - in the form of Bitcoin and Ether that, of course, can be converted to fiat currency - and then attempt to build an ecosystem in which Kin's value will be created by Kik users as a means of exchange (imagine if "Likes" on Facebook/ Instagram/ Twitter became a commodity rather than an infinitely available expression of sentiment). Developers who build on the Kin blockchain and become part of the Kik ecosystem will receive Kin tokens as a reward, so the more people a developer brings to the party, so to speak, the more valuable their Kin tokens will become.

The S.E.C. is still on the fence as to whether these tokens amount to securities or not, but it is investigating the matter further. But what really has some observers concerned, however, is the problem referred to at the start of this Insight: many of these ICOs are nothing more than a White Paper containing lines of complex blockchain code.

This raises difficult questions about whether investors are in a position to fully understand the nature of what they are investing in, and whether they are being fully apprised of the viability of the project and the risk to which they are exposing their capital.

As the FT's Izabella Kaminska put it recently,

The other more striking concern is whether conventional investors have the skill set to review these contracts properly, many of which force investors to waive lawsuit or arbitration rights. Moreover they stress the user must have a deep understanding of the “functionality, usage, storage, transmission mechanisms and intricacies associated with cryptographic tokens and blockchain-backed software systems.”
FT.com

As Ms. Kaminska observes, in reality the number of people on the planet who are genuinely in a position to evaluate the viability of the proposition is in the hundreds, leading her to describe the whole enterprise as a "smart Ponzi scheme."

So why then the influx of (crypto)money into untested White Papers in exchange for digital tokens that could well have no value whatsoever? The answer, to a large degree, is to be found in East Asia: Japan and China in particular. The Japanese government's decision to authorize Bitcoin as legal tender has granted a veneer of legitimacy to the entire cryptocurrency project, even if many of these ICOs have little to do with Bitcoin other than to suck it in and vanish with it. But the bigger source of funds is China, whose cheaper electricity and computer hardware have made it a hive of Bitcoin mining.

However, in recent months Chinese Bitcoin miners, hoarders and afficionados have found it increasingly difficult to convert their BTC into fiat currency, and have become what are known as Bitcoin "whales", so big is their exposure to Bitcoin. Converting their BTC into altcoins, such as Tezzies, diversifies their cryptocurrency portfolio, and in helping to push up the price of their newly acquired altcoin, gives the underlying White Paper an aura of legitimacy irrespective of the merits of the underlying code and/ or use case. Even without China, though, observers have noted a correlation between high ICO value and its convertibility into fiat currency on exchanges.

The possibility of price manipulation, absent proper regulation, is more than just a theoretical possibility. It is well known among insiders that shady deals to inflate value in exchange for some cut-price tokens take place, and absent formal regulation there is little that can be done to try and stamp it out. Nevertheless, a consensus is emerging that a risk factor analysis should be appended to the White Paper technical document, that outlines specific risk factors:

Indeed, it seems prudent that any prospectus that attempted to downplay the risks associated with so novel an investment as an ICO should be treated with suspicion. And while some ICOs (such as Tezos) have come with big-name backers from the world of VC, it seems unlikely that the current ICO craze is anything other than peak Tulip. Some of the new protocols and altcoins are likely to survive the bubble when it bursts, but anyone who does not understand the technical White Paper and nevertheless proceeds into the world of ICOs is either very brave or very foolhardy. Caveat emptor remains as good advice today as it was in the days of Caesar coin.