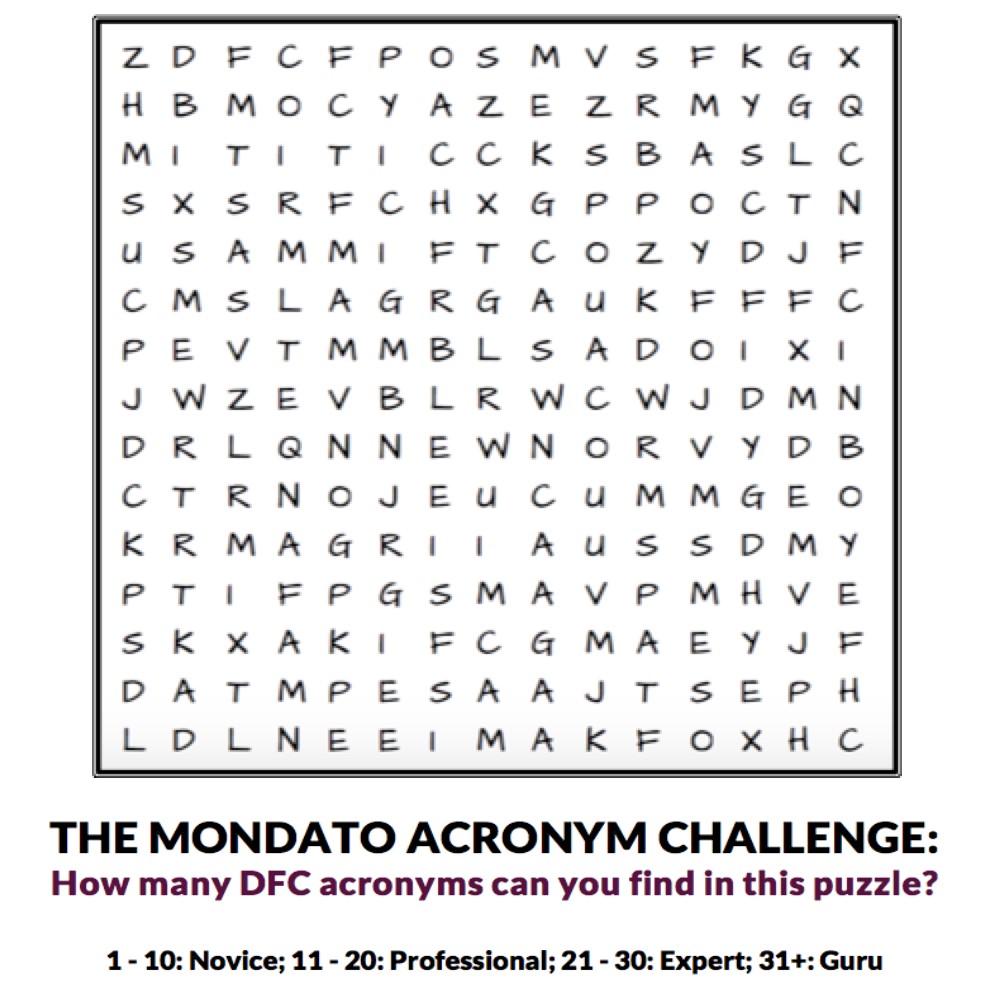 'Technology-speak' has long existed outside the vernacular of the average Joe. As technology continues to wiggle into every nook and cranny of day-to-day life, though, there has been a bridging of the slang gap, allowing an ever larger number of people to keep up with at least the basics. The same is not quite true with the jargon that accompanies the Digital Finance and Commerce (DFC) space. Even seasoned veterans are likely to encounter a term or abbreviation that leaves them stumped.

This is, in part, due to the splintered nature of digital finance. A specialist in online and mobile banking might be comfortable with Alternative Delivery Channels (ADCs) as a concept, but feel like a fish out of water in the nebulous world of Initial Coin Offerings (ICO). A cryptocurrency evangelist, in contrast, would probably be inclined to find the latter term more digestible than the former. Or, what about a DFC regulatory buff? Indeed, a home away from home would not be far in a discussion on the intricacies of the EU Payment Services Directive (PSD2) or the evolving status of sandboxes. But, few among us can be an expert in everything, especially given the rate at which new lingo seems to be debuting.

No Sense Of Consensus

The splattering and spiraling of terminology is only half of the pickle. There are shaky linguistic foundations that inform the DFC ecosystem, such that factions are often at odds about not only exact definitions, but what mechanics, processes and products should be anointed 'digital.'

A Palette Of Payments

Even some of the most obvious and central pieces remain ambiguous. The classifications of payments, a transaction embedded into nearly every business model and use case in the DFC ecosystem, is still a point of contention. The question as to what constitutes a digital payment will elicit a variety of responses, some particularly binary while others more flexible. The extremes on the spectrum often range from the "anything that is not cash" mentality to a fixation on the number of digital points or devices involved that 'qualifies' a payment as digital.

The Better Than Cash Alliance (BTCA) has demonstrated both the historical fluidity of the term in its Payments Measurement Toolkit and the empirical benefits (from the perspective of measuring digital flows) that come with some sort of standardization. And, with the stab at standardization, too follows an avalanche of acronyms that seem to contextualize every particular situation that could arise between payer and payee.

Some of these acronyms, at least within the industry, have caught on and are used ubiquitously - P2P, G2P and B2B, for starters, come to mind. Others like G2B, D2G or P2B are less notable, usually popping up only in certain circles. True to the dynamic disposition of the DFC universe, however, a new payer / payee combination is making waves outside of these old-school designations. In an environment powered by Internet of Things (IoT) and Artificial Intelligence (AI), machine to machine (M2M) communication and payments will, sooner or later, dramatically shape the financial landscape.

Outside of these retail payment designations, financial institutions themselves host and facilitate a whole slew of payer-payee models that include wholesale funds transfer systems, settlement of foreign exchange transactions, interbank settlement payments, and securities settlement systems.

From USD To BTC

As if all of these payer-payee groupings were not already a mouthful, the instrument of digital money itself is subject to a rubric style breakdown. There is mobile money (MM, m-money), online money and prepaid cards, all derivatives of electronic money (e-money), in addition to electric fund transfers (EFTs) and payment cards.

Regardless of the technical treatment of cryptocurrencies, the explosion in their popularity has left even the most fastidious observers winded. Back in the old days, most could get by with the knowledge of one cryptocurrency symbol, Bitcoin (BTC). Now, there are 811 different coins registered with Coin Market Cap, and easily a handful of those are major contenders in the space. It appears that passive exposure to cryptocurrencies, especially for those sitting at the periphery, is no longer enough to remain 'conversational' in the space.

The multiplicity of ways as to how digital money is named, and moved, might make up the foundational strands of a web of terminology relevant to DFC, but the players that facilitate the world of digital money are also instrumental structures. Banks, Financial Institutions (FIs), Microfinance Institutions (MFIs), Mobile Network Operators (MNOs), Mobile Virtual Network Operators (MVNOs) Mobile Transfer Operators (MTOs), Payment Service Providers (PSPs), Remittance Service Providers (RSPs) and more speak to only the most abstract level of service provision.

Those most intertwined with the industry would, at least, be familiar with the heavy-weights of each brand (from Safaricom to Paytm or Ant Financial). On top of that, many, too, would be knowledgeable about the suite of Mobile Financial Services (MFS) or Digital Financial Services (DFS) each offered, whether that be Cash-In Cash-Out (CICO), Airtime Top-Up, Bill Payments, Account-to-Account Transfers, Insurance Products, Mobile Banking or more.

However, as digital finance products become more sophisticated, how to signal features is a question of semantics in and of itself that stakeholders will find themselves engaging with at an increasing frequency. What differentiates Online Banking from Personal Finance Managment (PFM) software, for example?

The messiness and imperfect nature of simple language describing elaborate technology is an added conundrum the digital finance community will also have to address. Even among DFC professionals, the mode of communication can be unapproachable - it seems unwise to bundle products and offerings into that realm of complexity.

While the core components, and corresponding shoptalk, have been laid bare, the beauty (or headache) of the DFC ecosystem is its vastness. Artificial intelligence, biometrics, cyber security, logistics, regulation, retail, smartphone manufacturing and telecommunications all have had, and will continue to have, their respective moments in the industry spotlight. And as these sectors intersect and interact with digital finance, so too will their words be absorbed into its basic vocabulary.

Application Programming Interfaces (APIs) are one such classic case. Originally a subject for computer geeks, APIs have found a foothold, and are now commonly christened as 'the future of banking.' Near Field Communication (NFC), Host Card Emulation (HCE) and Secure Element (SE) share a similar story line. All three acronyms have tech-specific use cases, but a push into payments helped secure their usage in more generalist circles.

Generalist circles here, though, tend to refer to people pretty far along the DFC learning curve. If there is trouble in keeping insular groups abreast as to what's what, how will consumers stay up to date? Last week Mondato Insight noted the possible pitfalls when the naive invest in ICOs. Or, still in that vein, not fully disclosing the depth of Mobile Financial Services, from either a security or data point of view, is a consumer protection nightmare. A balance must be struck between the quick adoption of slang to describe emerging technology, products, processes and more, while also ensuring DFC doesn't become the code-word for entrance into a secret club.

ICOs: A Shortcut To Boom Or Bust?