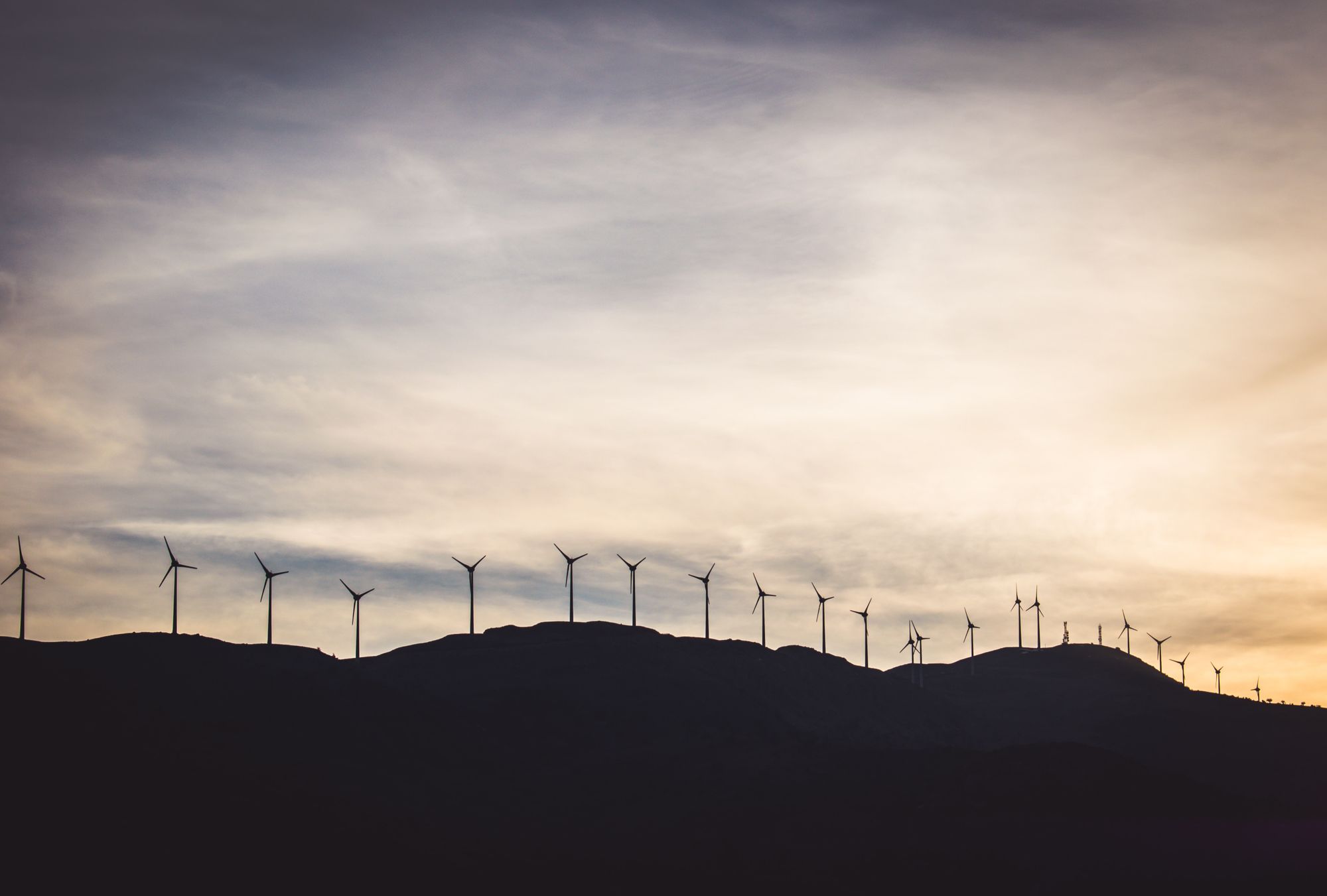 With new year fanfare subsiding, the long march towards achieving the UN’s 2030 Sustainable Development Goals has kicked off. The breakthroughs achieved by the first waves of mobile money and their ancillary digital ecosystems must be marshaled once again to make inroads beyond the lowest-hanging fruit and into countries with harder-to-reach populations. This evolution is mirrored in the off-grid energy sector, which in 2019 doubled down on mini-grids as the key to universal access. In light of the obvious symbiosis between electrons, digital finance, and economic inclusion more broadly, this week’s Insight asks: what market opportunities at the ‘last mile’ of connectivity offer the ripest opportunities for both energy access and digital inclusion at scale?

GSMA, the global mobile operator industry group, estimates that just under 70% of the global population owned a mobile phone going into the new decade. Rural Africa and the Indian sub-continent are the final frontiers in this respect, but contain some of the hardest-to-reach areas - in such places, the gap between men and women owning a mobile phone is even greater than the 10% global average. The next billion digital users - ravenous consumers of not only voice and text data but also smartphones, video streaming and mobile money - are also disproportionately represented by countries in the ‘Global South’ like Nigeria, Ethiopia, and India.

Critical to satisfying this demand is the mobilization and deployment of billions of dollars, millions of devices, and the requisite infrastructure to support robust access and adoption. Electricity, the sine qua non of all things digital, is thus firmly at the foundation of the global development agenda’s financial inclusion imperative - not to mention a critical enabler for nearly every other economic actor, from the smallholder farmer to the multinationals who source from them.

Universal digital access thus rests on universal access to electricity. Though nearly 9 in 10 individuals have an electricity connection worldwide, access is unequally distributed, with 56% of Africans - 573 million people - without modern energy as of 2019.

Over the past several years, the relationship between energy and digital finance has gained increasing interest as debates around the benefits of electrification start to move beyond questions of “if” to questions of “when” and “how.” The overlap between access to energy (A2E) and the challenges and opportunities in the digital finance and commerce (DFC) space find convergence in what might be called the “electricity-digital” nexus, whose political, ethical and economic implications unspool into issues of digital identity, access to finance and data privacy, to name but a few.

Meanwhile, recent evidence has begun to provide tangible business evidence of the synergies between innovative energy service providers and digital finance players on the frontlines of expanded financial inclusion. In Nepal, for example, leapfrogging the traditional grid through an innovative off-grid energy model resulted in sustained increases in commissions for community mobile money agents as well as increased airtime revenues per customer for local telecom N-Cell. Indeed, it has become apparent that ‘micro’ utilities are “both some of the largest mobile money recipients in Africa and the reason for many users opening accounts,” while ‘traditional’ grid utilities are also contributing to growth in digital finance adoption:

“30%–50% of solar micro-utility customers outside of Kenya opened a mobile money account to pay for service...PEG was the largest consumer of mobile payments in Ghana for telecom MTN in 2016...solar-home-system company Fenix International was the third largest in Uganda [while national grid] revenue share from mobile money payments in Uganda increased from 1.1% in 2012 to 27.5% in 2017. Lee et al 2019, Review and Perspectives on Data Sharing and Privacy in Expanding Electricity Access

Short of directly investing in energy access as a way to build cross- or up-selling opportunities through deeper customer relationships (as some forward-thinking banks, telcos, and even European utilities have done), what trends in energy access should digital finance actors across the board be aware of as they contemplate first-mover strategies in the world’s fastest growing - and most challenging - economies?

Among the methods for providing energy access to the disconnected, several models have emerged to solve the challenges across distinct segments at the “base of the pyramid.” The front-runners are solar lighting products - lanterns, torches and room-lights equipped with a battery and a small solar panel for recharging. Enormous demand for basic lighting and phone charging has driven sales of such products for well over a decade (over 4 million units were sold in the first half of last year), and economies of scale have permitted leaders in this space to reach an estimated 280 million individuals since international market watchers started tracking the market in 2010.

Solar home systems represented to many the next step up the ‘energy ladder’ in terms of the ‘tiers’ of energy consumption - less portable, and requiring proper installation at a given site, these larger systems are experiencing surging demand with sales growing 40% in the first half of 2019 in mature East African markets. Such systems are capable of satisfying the growing demand for TVs, fans, fridges and other off-grid appliances, of which 730,000 were sold in the first half of last year alone.

Mini-grids, however, represent the holy grail of modern energy access at the edge of the grid. These systems leverage the global utility trends of digitalization, decentralization and decarbonization by providing grid-comparable energy services to multiple households and businesses through a combination of innovations in renewable energy generation and storage as well as operational efficiencies unlocked by remote sensing, metering and billing. 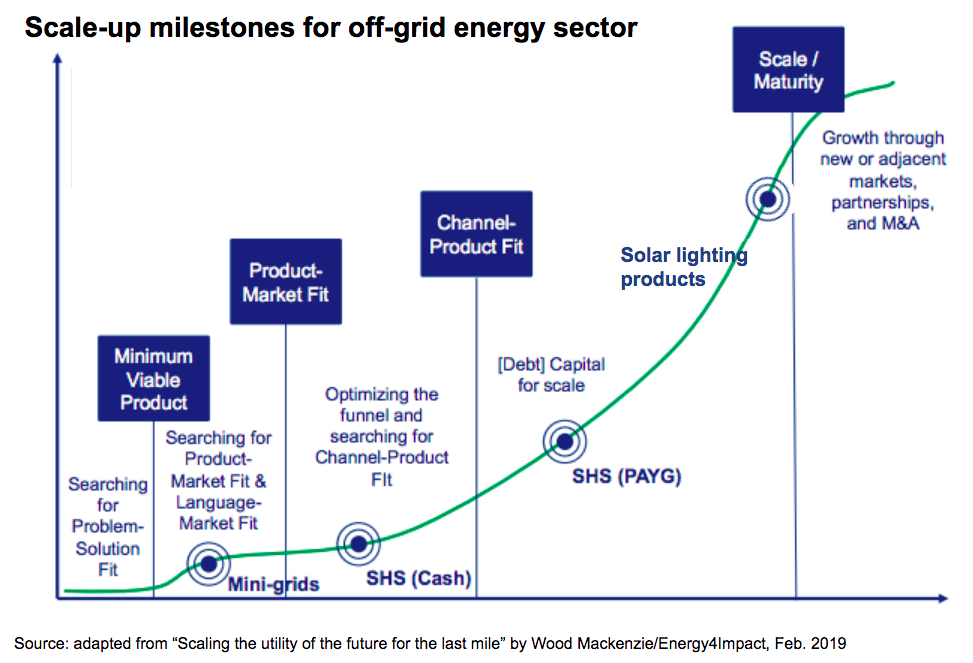 2019 was a coming out party of sorts for mini-grids: the World Bank released a landmark report estimating mini-grids as the lowest-cost technical solution for connecting 490 million people globally by 2030, up from an estimated 47 million currently connected to a mini-grid to date. Funders also stepped up to the plate, with the first private sector project finance facilities for African mini-grids launched in 2019 as well as billions of dollars collectively committed by international development financiers and foundations, particularly focusing on East Africa, West Africa, and India.

Yet profitable models have yet to prove themselves scalable. Promising avenues for turning mini-grids’ 2019 moments into momentum are emerging, however, with significant opportunities for the digital finance and commerce players to get in on the action.

Over the past decade, the off-grid energy sector has developed excellence in last mile distribution and installation of physical assets - and in the meantime realized that selling to the poor is an expensive, low-margin business. Led by the Pay As You Go revolution modeled after pre-paid mobile air-time consumption, innovative financing models were developed which allowed suppliers to finance customers’ products over the lifetime value of the asset, unlocking a whole array of possibilities around energy-as-a-service.

This strategy, however, carries enormous upfront costs closer to that of a bank’s core activities than a utility’s. Painful bankruptcies in the sector have discouraged new entrants from trying to be everything at once, and these parties are instead looking for partnerships with local financiers with the capacity and expertise to finance the poor - e.g., micro finance institutions (MFIs.) For a number of reasons, however, MFIs have made awkward bed-fellows with off-grid energy players, in part due to different appetites for speed and technology. This signals an enormous opportunity for digital financiers popping up across Silicon Savannah to bring their digital efficiencies in credit scoring and mobile disbursement to the challenge. 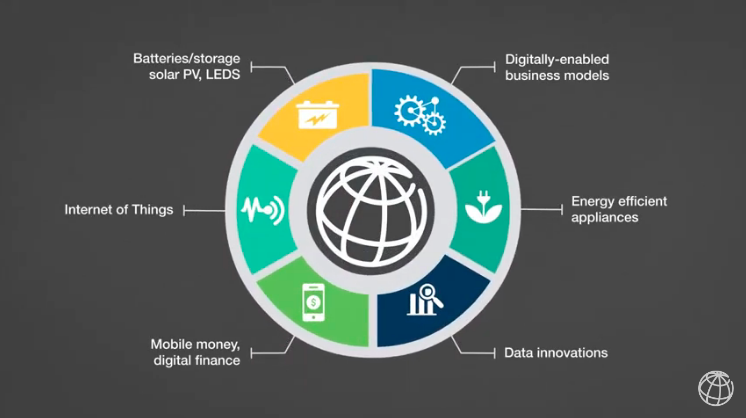 The focus for the off-grid energy industry in the next phase of mini-grids’ growth appears to be on the financing of “Income-Generating Appliances” - assets that enable customers to generate more revenue from their existing economic activities (as opposed to, for example, TVs and radios, which function primarily as leisure appliances.)

The increasingly laser-like focus on identifying such use-cases by the next wave of energy players electrifying the hardest-to-reach communities should thus prick the ears of all enterprises at the “food-water-energy nexus.” Solar water pumps, for example, are particularly friendly to mini-grid technical capabilities, and have emerged at a ‘tipping point’ for wide-spread scale. Such assets will likely be financed and repaid on the basis of digital financing, not to mention monitored remotely and controlled through remote sensing and M2M mobile technologies.

Indeed, the off-grid industry seems ready to rethink their model from one of “electron retailers” to one more focused on identifying opportunities in value-chain development. In this approach, higher revenues can be earned by helping customers level up their own operations through “value-stacking” on top of basic electricity connections. For energy providers to grow with their customers, they must identify productive use-case theses - and are discovering that these have obvious overlap with the existing and emerging DFC sub-sectors:

Source: Wood Mackenzie/Energy4Impact 2019, "Scaling the utility of the future for the last mile"

In the next phase of the off-grid energy industry, the fastest way for players to execute across this complex matrix of products, skills, competencies and challenges will be to leverage what’s already on the ground in the form of local businesses and the existing tech ecosystem. The fintech landscape in emerging markets, for example, is experiencing unparalleled and sustained growth, quadrupling in funding in 2018 to $357 million raised in Africa alone.

In fact, some of the most mature, African-born multi-nationals in the digital finance space have charted a similar path to scale as that energy players are now envisaging: Cellulant, a Kenyan digital finance provider, leapt to its dominant position following a value-chain digitization approach, through early successes in a farmer payment scheme in Nigeria. Other promising players in savings, lending, credit scoring and insurance also appear to be staking their success in value-chain specific approaches.

In fact, a growing number of ventures specifically tackling energy, agriculture, processing and marketing challenges have emerged, perhaps presaging a wider shift in start-up financing away from building new products or business from scratch towards bringing digital innovation to ‘analog’ businesses.

Tracing the long arc of the off-grid energy industry puts it on a direct collision course with the challenges and competencies of the broad and deepening digital finance and commerce ecosystem. Higher tier energy providers in particular will be looking to mobilize expertise in smart consumer financing for the leisure and income generating appliances that drive their electricity sales, representing a uniquely tailored channel for splitting the costs of customer acquisition and development with digital financiers and perhaps even hardware manufacturers.

Mini-grids in particular are increasingly seeking to diversify their revenue streams from sole dependence on low-margin electricity sales. This approach is described by Inensus, a leading mini-grid operator and advisor as a transition towards being a “bi-product company,” focusing on professionalizing local market opportunities - from freeze-drying fish and selling in bulk to far-away capital hotels - to developing and maintaining snake venom antidotes locally. Such opportunities are undergirded by the mechanical, digital and financial infrastructures that bind value-chains together and ultimately determine the upstream vs downstream share of wealth distribution in an increasingly connected global marketplace.

Energy players’ core competencies with infrastructure provision and distribution logistics at the last mile offer a unique complementarity to the footprint-light approach that fintech and other DFC players grapple with in leading universal financial inclusion. An energy/finance joint-venture approach would not only unlock powerful synergies for generating and retaining value in the most vulnerable areas, but would also generate new forms of data and insights that are still so sorely needed in much of the developing world. In the spirit of the World Development Report 2021 - focusing for the first time on data for development - the opportunities for collaboration to generate new models for scaling up existing solutions are too important to pass up. With 10 years to go before 2030, it’s time to take some risks together.