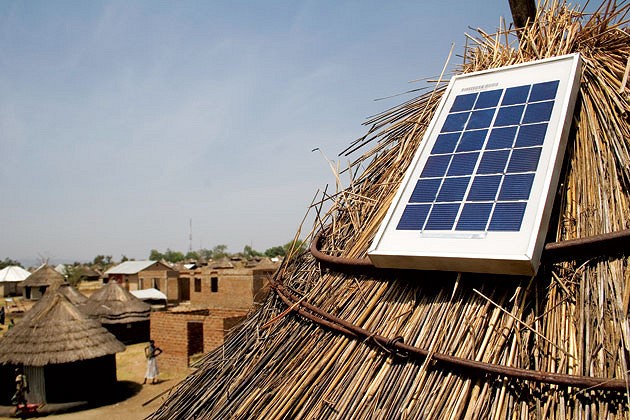 The off-grid energy industry is one of the most successful sectors serving the base of the economic pyramid (BOP), providing last-mile energy services where grid expansion ambitions have languished. In a few short years, Pay As You Go (PAYG) technologies have not only invigorated the sector but have driven mobile money adoption, and by extension increased the possibilities for financial inclusion and broader digital finance and commerce.

Yet the challenges of selling to the poor on credit remain a critical make-or-break consumer finance balancing act for small solar distributors and Silicon Valley-backed behemoths alike as the number of off-grid and bad-grid continues to rise in absolute terms. Given that BOP cash-flow solutions are part of the bread and butter of Microfinance Institutions (MFIs), industry analysts have recently reignited the hope that microfinanciers can crack off-grid solar’s repayment challenge - despite a historically arm’s length relationship. This week’s Mondato asks: in an age where tech startups are shaking up consumer finance, are we on the verge of a new era of collaboration amongst traditional microfinance and off-grid energy?

Since the emergence of microfinance in India in the 1980s, the global portfolio of loans and the number of active borrowers has increased 9 percent annually, for a collective global value estimated at $114 billion in 2017. Although the off-grid solar market is comparatively younger and its total value hovers at only $4 billion in comparison, its future is glaringly bright, boasting impressive growth rates at 60% CAGR. Endowed with a competitive edge in large part thanks to payment flexibility and up-front cost reduction permitted by technologies that shut off in case of non-payment, PAYG players have come to dominate the off-grid energy sector, capturing a whopping 85 percent of the nearly $500 million raised between 2012-2017.

The emergence of PAYG providers had many early observers scratching their heads as to how to classify them: whereas previously, solar and other off-grid products were often offered along traditional credit and repayment plans to offset their high-upfront cost relative to small, daily kerosene purchases, PAYG products allowed hardware makers to ‘embed’ payment plans into the devices. While this allowed millions of new customers to access off-grid lighting products for the first time, PAYG providers realized their rapid expansion came with increasingly complicated balance sheets. And product companies are not finance companies.

Microfinance institutions seemed a natural ally, with expertise in evaluating credit risk, managing collections and generally maintaining healthy loan portfolios. In return, PAYG companies could offer MFIs an on-boarding platform for new customers, with granular data on otherwise “thin-file” customers and last-mile agent networks to boot. Yet contrary to predictions of imminent symbiosis between off-grid product providers and microfinanciers dating back to at least 2011 (perhaps even earlier), microfinance-driven sales of energy products have failed to mature into scalable models, and even stories originally touted as case studies have had to be re-examined as prominent microfinance-led solar portfolios battle unsustainable default rates.

The PAYG and MFI union, however, has yet to be fully consummated. The quarrel between the new couple can likely be attributed to cultural differences. They may share similar customer profiles, loan size and risk factors, but the venture-backed PAYG model emphasizes aggressive and rapid expansion, while MFIs value a slow and steady approach, favoring stricter due-diligence and collateral requirements. Another cultural difference lies in the central role of technology. While digital systems lie at the very core of PAYG off-grid energy services, many MFIs still keep paper records. Having to learn how to operate PAYG IT systems for these organizations understandably raises skeptical eyebrows and stirs a certain amount of skittishness. Even managing unit unlocking, or locking in the case of non-payment, could cause some MFIs to break out in a nervous rash.

As MFIs eye PAYG players warily, the off-grid sector has been forced to look inward and take a more nuanced view of the “move fast and break things” startup ethos. That modus operandi might translate well for software companies, but trying to do too much too fast has chastened more than one major off-grid provider. So as energy entrepreneurs have taken stock of the fundamentals of their business - from weighing specialization versus vertical integration to the fit of the venture capital model for addressing their unique capabilities and challenges - MFIs have largely watched from a distance.

Against the backdrop of this seemingly hopeless partnership, CGAP earlier this year provided a brooding analysis of the PAYG sector and concluded that “the cleanest solution to the financial analysis problem [of transparently assessing PAYG attractiveness] is to separate the financial institution from the rest of the business.” The implication here is that despite the lack of chemistry and maturity differences, a healthy partnership is in fact still possible - predicated on the willingness of MFIs to get down with platypuses and other ‘strange beasts’ as PAYG.

It seems that in India, such love is possible and takes the form of ‘top-up’ loans. In this model, traditional microfinance loans are sweetened with energy products vetted by the MFI worth between 10-15 percent of the original loan. Industry players hypothesize that Indian MFIs operate in a more crowded lending ecosystem, where differentiation ensures better visibility among MFI competitors. Any additional margins made on the loan through PAYG solar products can lower interest rates and attract customers. This model represents the vast majority of microfinance partnerships for some of PAYG’s biggest players, and if the value is proven out by MFIs trying it out, it could indeed kindle a sustainable and mutually beneficial relationship.

The size of energy packages could also provide an opening for further collaboration. As energy efficient appliances designed with off-grid markets in mind become more accessible, the range of solar home systems demanded should rise as well. The global estimated spend on fans, TVs and fridges by under-electrified populations is projected to jump from $524 million in 2015 to $4.7 billion by 2020.

Off-grid companies could presumably equip these burgeoning offerings with PAYG technology. The holistic powering and control over these appliances, too, would be channeled through the solar home system (whose on or off switch is integrated with PAYG hardware). This would most probably perk the ears of financiers venturing into white goods territory. 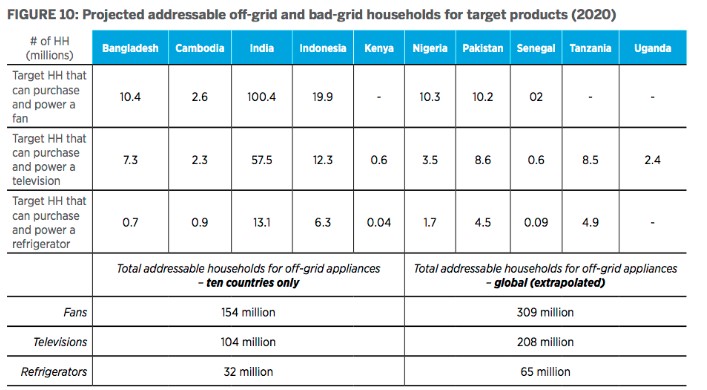 Source: LEAP, The State of the Off-Grid Appliance Market 2015

The blurred lines that PAYG providers tread are shifting as fast as they are themselves. Gifted with the lessons from large and growing markets in East Africa and India, West Africa appears to be the next frontier in defining how off-grid energy providers will crack the affordability and repayment nut, with or without traditional microfinanciers. While lagging behind its Eastern counterpart in mobile money ecosystem depth, West African countries are catching up, with penetration rates increasing by over 4x in only a few years, as Mondato Insight reported earlier this year.

Off-grid providers will not only benefit from lowered payment friction in more robust mobile money ecosystems, but they may very well find willing telecom partners who see symbiotic relationship in on-boarding new customers onto their platforms as in the early days of PAYG in East Africa. With a new geography comes different untested territory however; research already shows that West African off-grid customers’ cash flows are more closely tied to agricultural cycles than their Eastern counterparts, perhaps due to stronger remittance channels.

Jumps in smartphone penetration may also prove a game changer - creating novel opportunities for lending tailored to PAYG needs. Tala’s Android solution delivers rapid credit decisions based on 10,000 data points culled from alternative data for loan sizes too small to interest MFIs but perfect for small scale PAYG products. In a similar vein, Zola (formerly Off-Grid Electric) toys with machine learning to identify likely payment defaulters. As always, the universe of the possible expands proportionally with digital literacy. This coupled with smartphones rapidly outpacing televisions as the primary mode of delivering video content and we may see finance specifically for smartphones emerge.

While the learnings from arranged MFI / PAYG partnerships materialize, many more experiments are needed to find the right partner for the PAYG platypus. From lumen-hour tied results-based financing to approaches that more explicitly target 'productive' loans or assets used to enhance a business or household’s income, a plethora of partnerships remain to be explored beyond the ‘will they or won’t they’ of MFI and PAYG.