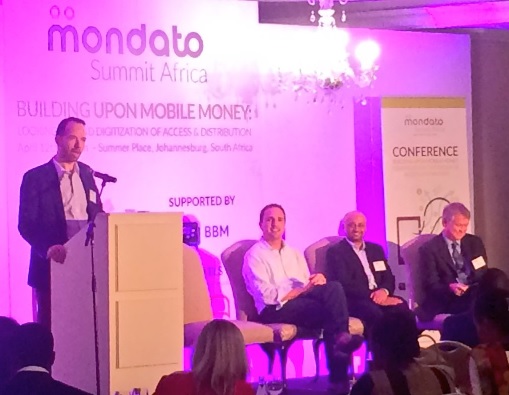 When it comes to the global digital finance and commerce (DFC) space, Africa holds a special place in the minds of many, for the continent, at least the sub-Sahara, is recognized as a leader in DFC innovation, experimentation and achievement. This reputation was upheld and further enhanced during the just concluded third annual Mondato Summit Africa, which took place on 12 and 13 April in sunny, vibrant Johannesburg. Industry thought leaders and influencers from a wide cross section of banks, telcos, retailers, fintech, investors, starts-ups, regulators, and service providers gathered to share observations and exchange ideas about the state of DFC in Africa, looking both at developments over the past year and ahead to what the future may hold.

Judah Levine, CEO of Mondato, opened the proceedings by pointing out the evolution towards more integrated offerings, suggesting that these may be better referred to as “digital finance and commerce” than the more traditional “mobile financial services.” The latter is somewhat more associated with value transfer and initial use cases, while the former is driving disaggregation and disintermediation of value chains across various sectors. Mr. Levine noted that “traditional sectors are feeling the strain, but this is not necessarily a bad thing if seen as a call to evolve.” This opportunity includes both capturing greater value from existing customers that is currently being left on the table, and expanding addressable market into previously nonviable segments.

For Africa, Mr. Levine sees DFC increasingly moving from a period of experimentation towards sticky value propositions for greater digitization of operations and services. Examples included alternative lenders using whatever bits of information can be captured on phones to bring financial identities and credit to the previously excluded, the extension of new financing schemes for residential distributed power, or scaling agricultural insurance by automating the process through sensors and geo-locational data. Mr. Levine stated, however, that a focused approach is required, rather than looking to scale and diversification from the start.

The keynote set the stage for the rest of the day, and led nicely into the keynote panel, “Critical Path to Deepening and Broadening Digital Finance & Commerce.” Alban Luherne, Orange Money Director – MEA, emphasized the importance of first ensuring that the essentials are in place, and for many markets this is “distribution, distribution, and distribution.” Continuing this bottom-up theme, Ahmed Cassim, Chief Commercial Officer of Hello Group, explained the company’s approach to innovation as “co-creation”, with every member of the team spending time on the frontlines for product development.

Yet challenges arrive for those propositions that do gain traction and begin to scale. One of those being the difficulties in navigating the myriad of regulatory environments for those operating across borders. In particular, Eric Barbier, CEO of TransferTo, identified the lack of technical and compliance standards as especially problematic, particularly for those such as NGOs that are making a wide range of international bulk disbursements.

Michael Solomon of BlackBerry’s BBM provided a compelling case for the role of messaging apps as ecosystem platforms. An inherent advantage is that users have already been conditioned for sending private messages on the platform, and therefore already have a good deal of trust in the service. This positions it well for commerce and payments, with BBM offering targeted ads for in-app purchases that are linked to cards and carrier billing.

Gerald Rasugu, GSMA Mobile Money Market Engagement Director, MEA added that there is still much more room for collaboration and interoperability to reach larger common objectives of delivering more services to consumers, while reducing costs for banks and business, resulting in greater broadband adoption and profitability for service providers. To this point, Alban Luherne provided examples of how Orange Money is supplementing bank distribution channels and government payments across multiple markets, including a growing service in cross-border remittances from France. Daniel Waldron of CGAP’s Digital Finance & Energy group showed the potential for synergies between off-grid electric companies and banks for the financing and deployment of distributed power, while opening the door to and then leveraging those credits for further goods such as home appliances.

Building on the theme of increasing DFC momentum, the Chief MFS Officer of Tiaxa, Aiaze Mitha, showed how the company is moving mobile money well beyond the one-off use cases, which result in half of registered accounts being inactive. One key is making it a better place to store value rather than just digitizing payments, which comes at the very end of the value chain, with one of Tiaxa’s initiatives to support this being nano-loans to the unbanked. And while the financial education can be a long process, Tiaxa have found that the efforts pay off as customers increasingly value the service, become more comfortable borrowing larger amounts, and actually end up repaying loans faster than required.

The importance of financial education was echoed by Zviko Mudimu, Managing Director of Operation Hope, with one problem being that existing programs tend to be overly focused on traditional banking, a channel that may not be the first stop, and often they need to focus more on other options for the un- and under-banked. Visa’s Natalie Baatjies, Senior Director of Financial Inclusion CEMEA, says making those traditional channels more relevant involves innovation focusing more on new business models that banks can utilize before moving on to specific products.

After being the subject of much discussion over the earlier previous sessions, Tim Masela, Head of National Payments System group of South African Reserve Bank, reassured delegates that regulators are making concerted efforts to engage fintech to grasp new propositions in regards to both potential benefits to the economy and the risks to keep an eye on. Avoiding a heavy hand, the Reserve Bank wants to provide space for experimentation, while ensuring financial stability.

The final session of the first day focused on the importance of focusing on women to really push financial inclusion. Zoona Managing Director Lelemba Phiri described how they are providing mentoring and training to help women become entrepreneurs as mobile money agents. Sharron McPherson, Executive Chair of WEDI & WINDE, said anybody serious about developing strategies for targeting SME needs to be mindful of the fact that many of these entities are increasingly owned and operated by women. Kim Dancey, Head of Payments at FNB International, pointed out that one way to potentially increase engagement with this segment is to find ways to introduce social media for communicating with these women, who are well connected through extensive community support networks.

The underlying theme of day 2 was innovation. Brett St. Clair, Head of Digital at Barclays Africa, kicked things off with the cautionary tale of Kodak descending towards irrelevance after failing to act on its digital camera technologies originally produced in the 1970s, and drawing parallels to the importance of banks becoming more agile to implement quickly. What is needed is “moon shot thinking” to really focus efforts around clear objectives.

Toby Shapshak, Editor & Publisher of Stuff Magazine, led an engaging panel on Strategies for Digitizing Businesses, and pleaded with delegates to focus on the real problems, rather than just developing “another parking payment app.” David Kitley, Head of Operations at Uber South Africa, explained how the company supplements big data by directly engaging customers to inform product development and new spaces to move into. Crayg Hitzeroth, Managing Director of Ad Dynamo, and representing Twitter in Africa, said the vast “signals of intent” of the messaging service provide the building blocks for companies to then go and translate these into disruptive value propositions. Paul Kent, Managing Director of SureSwipe, believes the key to driving this innovation is to develop cultures that are built around learning, and to utilize “smart data,” rather than just big data.

Entrepreneurs in the Spotlight

The afternoon of Day 2 was an interesting view into how both incumbents and entrepreneurs are navigating uncertainty, and defining their roles in emerging ecosystems. Gabriel Swanepoel, VP Product Development & Innovation at MasterCard, explained how essential it is to first achieve scale on an individual use case which provides the critical mass around which to then assemble a wider ecosystem of services. Sharebit founder Gavin Marshall provided the entrepreneurs’ perspective of how this can be very beneficial for start-ups to leverage the resources and functional expertise of larger partners.

This was echoed by Amee Patel, Senior Investment Officer of Accion Venture Lab, who provides seed funding to early-stage companies. She found that while roughly half of entrants are looking to be disruptive in their space, this is almost equally balanced by those looking to facilitate incumbents in evolving their businesses. Coming in at later rounds of funding, IK Kanu, Principal with Convergence Partners, explained that the firm looks for entrants that not only bring profitable business models, but that are disruptive in a manner that benefits the wider ecosystem to deliver proposition momentum.

What Does the Future Hold?

Later in the afternoon, a panel of experts were asked to predict the future, which brought some interesting predictions, though some hedging occurred when asked to only predict those things that will occur in our lifetimes. Antonio Separovic, Managing Director & Founder of Oradian, sees the coming years being for platform plays where those that offer differentiated propositions will fight a land grab battle that determines the eventual winners. David Crush, Program Manager of Financial Inclusion at the International Finance Corporation, stressed the importance of government and regulation in determining the paths of individual markets, and thus a focus area for the IFC. Shaheen Adams, Acting Managing Director of Postbank, sees a large opportunity for those able to commoditize financial services that are advisory in nature in order to lower costs, similar to the roll-out of funeral insurance.

Prior to the close of the event, the winners of the Mondato Summit DFC Africa Innovation and DF+ Social Impact awards were announced following an intense competition, which included some 30 entrants. The DFC Africa Innovation award was captured by Cash Credit, while the DF+ Social Impact award was awarded to Oradian. Runners-up BBM and Money Savvy Kids were also praised by the judging panel.

In his concluding remarks to the Summit, Judah Levine mentioned that over the past three years the focus has advanced from P2P as the killer app to the emergence of new use cases, and this year is witnessing some of these gaining real traction. Looking to the future, the question is how entrants and incumbents alike will scale these propositions and others further.

The SME Opportunity for Fintech