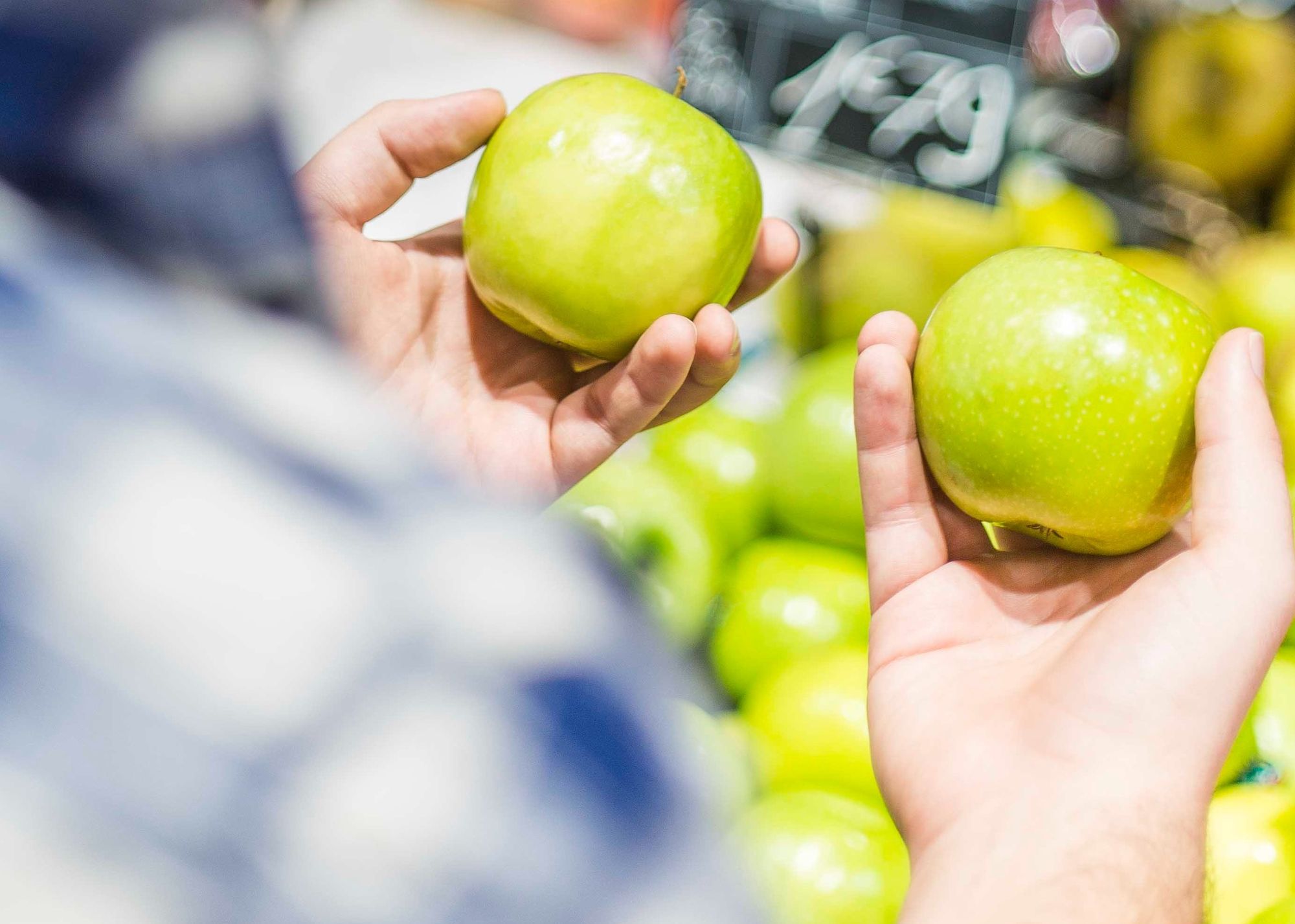 What does it take to change people’s financial behavior for the better? An often complex, scary endeavor for people, managing finances properly might be an option consumers don’t have the knowledge or time to do. Incentives or penalties may push them down the right financial path, but it comes with high cost and unintended negative effects.

However, with proven superiority in cost-effectiveness and increasing financial wellness, nudging is promising to be the way of the future in financial services, marrying behavioral science with real-world applications to increase fiscal responsibility for consumers of all socioeconomic backgrounds. Originating from the thought laboratories of Nobel Prize winners, nudging manifests in digital finance in numerous ways, with different approaches taken and diverging results desired — mostly for good.

From The Petri Dish Of Academia

The framing of nudging today began with the groundbreaking ideas described by Richard Thaler and Cass Sunstein in their 2008 book, Nudge: Improving Decisions about Health, Wealth and Happiness. Nudge theory is defined by the belief that alterations in the “choice architecture” — how choices are presented — of a situation can “nudge” a person to make decisions better suited for them.

The necessity of crafting the right “choice architecture” for a given person is steeped in the psychological deficiencies of the human mind. Decision inertia, where people are inclined to stick with the “status quo” even towards sub-optimal ends, is well-documented. Similarly, people prioritize the present over the future, even if that means excessive spending to the detriment of longer-term savings. And when it comes to those bigger picture, longer term decisions, procrastination invariably ensues.

Thaler’s nudge theory takes those psychological hurdles and turns them on their head. Rather than presenting a glut of choices, reducing choice overload may help in catalyzing decision-making. By setting optimal decisions as the default — though not only — choice, people’s inertial tendencies can be utilized for their own benefit. And to bring far out decisions to the present, incentives like instant gratification — providing virtual rewards for a responsible decision made, for example — can hijack the myopic outlook of humans so they responsibly make decisions. Thaler has proudly called this approach “libertarian paternalism”: people don’t have their choices constrained — they’re simply guided towards the path that’s best for them.

In the private sector, nudging proves far more effective and cost-efficient than through traditional financial incentives or penalties. In Afghanistan, an employer informed workers that, unless they opted out, 5 percent of their paycheck would be automatically deposited into a mobile savings account. Employees in the program were 40 percentage points more likely to accumulate short-term savings than employees who had to opt in, an increase equivalent to that found when employees were offered a 50 percent match by their employer — a far costlier effort. Such a default mechanism negates the behavioral faults of human inertia, myopia and procrastination; the decision hasn’t been made, but all a user needs to do is click “okay.”

The default mechanism is just one of several methods used in finance to improve financial decisions. Another possible solution is commitment devices, which are voluntary, binding agreements that people make to reach specific goals. Applying social and even (optional) fiscal pressure on people brings the issue to the immediate and continuous forefront, often in a gamified environment. While mailing reminders are often costly, digitized reminders help people attend to their financial needs at the mere cost of an SMS message.

A Nudge... In The Wrong Direction?

Nudging by itself does not necessarily improve fiscal decision-making, however — and used in some ways, it may prove harmful. Certain studies focusing on the repeated use of the same nudging tactics over time suggest a fatigue effect, where initial engagement diminishes as time goes on. Nudging may also risk alienating potential savers if negative financial information is presented, a phenomenon known as the ostrich effect.

Another potential hurdle for nudging efforts is the psychological state of “reactance,” a discomfort that results from a perceived threat or restriction of freedom. Studies have shown this to be an issue when it comes to clumsily crafted default nudges. An experiment by Dominik Jung showed that although a higher percent of people continued to make inertial investment decisions without a nudge, the default nudge led to a skewed distribution toward greater decision inertia: 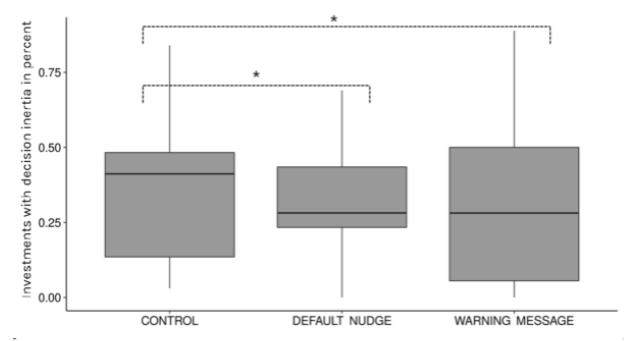 Beyond its effectiveness, there are also potential pitfalls of nudging in its application. Thaler has said that proper nudging should be guided by three principles: they should be transparent, easy to opt out of and improve the person’s welfare. Any internet user knows the deceptive angle supposed “nudges” may take. Excessive nudging for services of want, not need, can desensitize users from such tactics so that nudges become what Joe Coughlin, director of the MIT AgeLab, calls “noodges.”

When financial institutions and other companies employ nudging tactics on its consumers, fundamental consumer-provider tensions may boil to the surface: there may be occasions where certain consumer decisions — like increasing consumer spending, investment and product use — may benefit the financial provider but harm the consumer. Thaler himself wrote in the New York Times in 2015 that “many companies are nudging purely for their own profit and not in customers’ best interests.”

A Nudge... In Which Direction?

Nudging is a “hot trend” in financial services. But how nudge theory bares out in reality is quite different then the concept. Fintechs are finding that nudging works best when combined with other methods that perform a combination of several things: increasing financial literacy, forging consumer trust and diversifying consumer engagement.

A rather common attribute shared among fintechs in the nudging field is the use of SMS messaging and apps utilizing AI technologies to proactively engage with customers. But how exactly they go about this depends on the fintech’s adopted philosophy of nudging, which in turn impacts their business strategy. Nudge is a new Australia-based savings app that seeks to utilize the modern trends of instant gratification to promote what it calls “impulse saving.”

"Instant gratification is a human weakness exacerbated by the impulsivity of social media. We see it in impulse buying. If that is what’s happening, we can use it for impulsive saving as well." Andrew Wilson, Co-Founder and CEO at Nudge

Though vague about Nudge’s revenue model in its beta stages, Wilson calls the monetization of nudging services by some competitors “misaligned” in approach, but Wilson’s particular interpretation of nudging doesn’t stop there. Nudge largely ignores the educational potential of nudging to hammer away at its capability as a behavioral tool. Gamifying the experience, Nudge invites users to set a savings goal, periodically nudging its users via messages to transfer a specific amount of money towards that goal. It is then moved to their Nudge Saver account, which is held in trust with one of the four big Australian banks. As they approach their savings goal, visualized tiles are peeled away to slowly reveal an underlying visual related to the certain goal in mind — like a beautiful beach depicting that vacation they are striving for.

“Cautiously embracing” the libertarian paternalism label, Nudge emphasizes the peer pressure potential of nudging by messaging customers how others may be saving more than them, though remaining as positive as possible. While given default settings, users have the option to change the frequency of nudges sent, as well as the average savings amount suggested each time to stow away.

But for nudging services with other goals in mind, it can be combined with various methods to overcome the greatest barrier between financial institutions and clients: trust. Juntos Global partners with financial institutions around the world to engage customers in two-way conversations over mobile channels to build relationships and increase comfort they have with financial products. When a new customer at a bank is contacted by Juntos’ messaging service, nudging is not immediately put to work.


Employing behavioral scientists — like most nudging-inspired fintechs — Juntos’ AI-driven messaging services initially focus on developing a relationship with its consumers, maybe asking them about their commute and using that information as a springboard to note ATM locations on their way to work. Tidbits of financial literacy knowledge are sprinkled in from time-to-time by the AI, which is taken over by customer service agents when the conversations exceed the AI’s conversational capabilities. Only when trust is forged with consumers will Juntos’ messaging service begin to first note options available to them, followed by outright nudging. With this philosophy in mind, Juntos shies away from the “libertarian paternalism” labeling of nudging, viewing it as somewhat counter to the more holistic approach it takes in building trust.

Juntos takes a long-term strategy on nudging, which it believes is the best way to sustainably apply its concepts. Jack Parker, Senior Client Services Manager at Juntos, described one partner in Africa that saw approximately 5,000 to 10,000 people begin responding to messages a full 12 months after messaging first began.

Rather than seeing diminishing returns over time, Juntos tends to see customer engagement grow as trust increases and it slowly incorporates nudging along with several other behavioral techniques. Parker says Juntos’ clients range from traditional banks to MFIs and telcos. Though seeking to avoid over-generalization, he noted certain telcos’ promotion-oriented, immediate term approach sometimes fell short of the aim of nudging, in contrast to a more patient outlook extolled by many retail banks.

Personetics is another leading fintech player in the nudging arena. It focuses on retail banks, leveraging information primarily from checking, credit and savings accounts to optimize its nudging efforts. Personetics takes the banks’ customers on a similar path as Juntos in first consummating trust, initially sharing transaction-monitoring insights intended to do some of the work for the customer. When it comes to the stage of offering more personalized advice, including nudging, Personetics asks users to opt in, positioning the user as an active participant and weeding out potential customers who may resist any perceived intrusion into their financial affairs.

Personetics’ hope is to keep its services fresh and dynamic, maybe first making them aware of increased shopping spending (in the lightest terms), then suggesting a budget until they eventually nudge customers towards longer-term savings, like a retirement account. Unlike Juntos and the wider nudging model, Personetics takes its trajectory a step further to the end point of automating day-to-day transactions for customers once trust is fully formed, leaving customers only to make the truly “important” decisions.

Though some banks seek to promote cross-sales in nudging efforts, Meyers says there has been a noticeable shift among retail banks in the last three years towards embracing financial wellness in their marketing strategy. US banks such as Huntington Bank, US Bank, Chase and Allied Bank all focus on having their customer’s back.

These companies provide only a small sample of the various approaches and applications by fintechs of nudging today. But no matter the path fintechs choose to take, the trend is clear: nudging methods are becoming widespread and increasingly sophisticated. As a tool by itself, nudging’s potential is limited, illusory even. However, through integration of AI technologies and other cutting-edge behavioral science methods, nudging will inch closer towards ubiquity in financial services, traditional and otherwise. Nudging may have its drawbacks, but its potential use cases are vast.

Is Libra A Global Answer To Financial Inclusion?