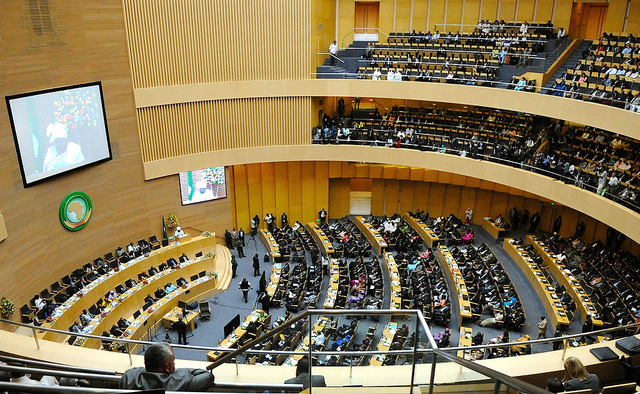 It's been nearly five years since SWIFT, the world’s leading provider of secure financial messaging services, popped the hood and let us sneak a peek at the engine behind Africa's cross-border flows. A sequel to its last stab at mapping commercial flows against financial flows, SWIFT's newest white paper is a primary data treasure chest. Reminiscent of the adage that Rome wasn't built in a day, the continent is witnessing piecemeal innovation in the form of modernized, localized financial infrastructure and increased regional coordination.

The resulting landscape in Africa is one that is inching closer to 'sovereignty' over its financial flows. This leaves the region less dependent on American and European clearinghouses, whose suppressed appetite for risk (a lingering hangover from the 2008 financial crisis and compliance requirements) has forced the rationalization and reevaluation of many correspondent banking relationships, of much detriment to small African banks.

Smack Dab In Between

The historical hold, so to speak, that American finance intermediaries have enjoyed is the consequence of a system where goods, especially commodities, are by and large denominated in the US dollar. As of 2017 the dollar still reigned supreme, and its dominance as the go-to cross border currency out of Africa only weakened slightly from 50 percent of payments in 2013 to 45.1 percent in 2017. The over representation of the US dollar in the process, however, distorts flow figures. SWIFT is therefore careful to differentiate between financial flows and commercial flows in order to conceptualize who and what channels are merely the pipes, and who and what channels are the ultimate beneficiaries.

Financial flows represent the payment route used for the settlement of the transaction. They are measured using the number of commercial payments sent by banks from Africa to the country of the counterparty bank.

Commercial flows refer to the payment instruction sent by the bank of a client A, typically a corporate, to the bank of a client B for the import of goods or services. These flows are measured based on the commercial payments sent by banks from Africa to the country in which the end-beneficiary is situated. 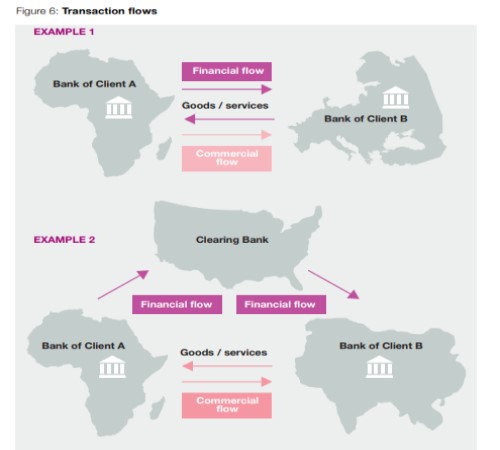 Scratching beneath the surface of the first payment routing reveals a story of budding localization and diversification of trading partners. Although 71.2 percent of financial flows are still diverted through North America and Europe (39.5 and 31.7 percent, respectively), the spread of final destinations has become more equitably distributed since 2013. Significantly, the most notable gain in commercial flows was intra-African trade followed by traffic with the Euro Zone. All other end points marginally tapered off. 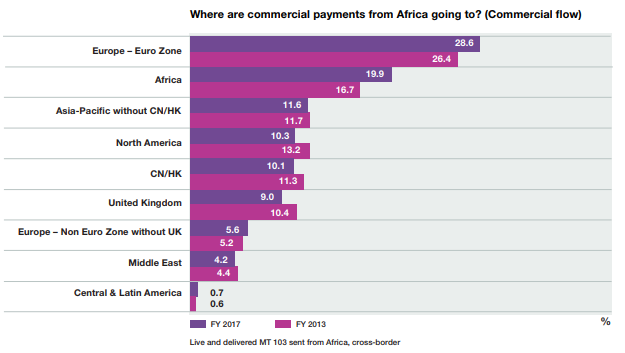 Get Rid Of The Middle Man

Both emboldened and incentivized by these trends, African governments are proactively forging policy and investing in financial infrastructure to further curb the disproportionate influence of foreign, a degree-of-separation away clearinghouses. This has largely manifested through initiatives that pave the way for more bilateral currency trade and promote regional harmonization.

For instance, while 10.1 percent of cross-border payments eventually land in China, the Chinese renminbi remains 'negligible,' and is involved in less than .01 percent of transactions according to SWIFT. This handy statistic, however, is liable to change. In May of this year, officials from 14 different central banks in eastern and southern Africa convened to discuss the expediency of a scenario where the Chinese renminbi was introduced as a reserve currency.

Most countries in the MEFMI region have loans or grants from China and it would only make economic sense to repay in renminbi. This is the reason why it is critical for policy makers to strategize on progress that the continent has made to embrace the Chinese yuan which has become what may be termed 'common currency' in trade with Africa.
Gladys Siwela-Jadagu, Spokesperson for MEFMI

If it seems silly to bring a third currency - and thereby US dollar clearing banks in the United States - into the equation for trade with China and Asia-Pacific, to do so with intra-African trade must feel downright farcical. And yet, a sizable chunk of commercial flows that are destined for another corner of the African continent find themselves touching down in the United States first. The middle man is thousands of miles away! 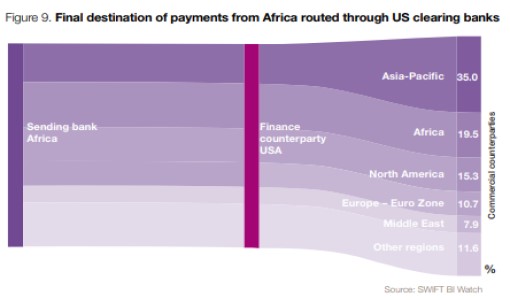 The shift away from commodity-based economies, which are more vulnerable to external shocks, to versatile economies with well-rounded contributions by processing and manufacturing industries has catalyzed a newfound confidence in intra-African trade as a means to sustainable development. This has helped solidify a communal political will to build out regional infrastructure, with a number of systems now up and running.

In the West African Economic and Monetary Union, the Central Bank of West African States administers the STAR-UEMOA (Système de Transfert Autmatisé et de Règlement de l’UEMOA), a regional real-time gross settlement (RTGS) system that serves Bénin, Burkina Faso, Côte d'Ivoire, Guinea Bissau, Mali, Niger, Senegal and Togo. Over the course of 2016 alone, there were 758,995 transactions (worth 457,831 billion francs) between 118 members. The acceleration and success of this union accounts for the increasing popularity of the West African franc as a cross border settlement currency - from 4.4 percent in 2013 to 7.2 percent in 2017.

A similar feat of coordination, namely the SADC Integrated Regional Electronic Settlement System (SIRESS), connects Angola, Botswana, Democratic Republic of the Congo, Lesotho, Madagascar, Malawi, Mauritius, Mozambique, Namibia, Seychelles, South Africa, Swaziland, Tanzania, Zambia and Zimbabwe with settlement carried out in the South African rand. From the time of its inauguration in 2013 until March 31st, 2017, there were 712,099 transactions (worth 3,100 billion rand) between 83 members. And again, the move prompted a jolt in regional currency use, with the rand capturing 7.2 percent of internationally-bound flows in 2017, up from 6.3 percent in 2013.

The African Development Bank, dead set on continuing this intra-African direction, is supporting other iterations of the same concept. The East African Payments System (EAPS) is a first step towards the creation of a monetary union between Burundi, Kenya, Tanzania, Rwanda and Uganda. The West African Monetary Zone (WAMZ), too, is engaged in an ongoing project to link the payment systems of Gambia, Ghana, Guinea, Liberia, Nigeria and Sierra Leone, a precursor to eventually establishing a larger bloc with the UEMOA.

Simultaneous with the pursuit of regional harmonization, stakeholders in the region are likewise mulling over interoperability at the highest and lowest levels. While an agreement that enables continent-wide payment integration is a long way off, there is the proposed Tripartite Free Trade Area, of which 22 of 27 member States have signed off on. It will not come into full effect, however, until 14 of those member States ratify it. That is a far cry from the current reality, and thus far only Egypt and Uganda have done so.

An equally challenging goal for the continent is interoperability across accounts, from mobile money to fintech solutions. At SWIFT African Regional Conference this year, there was a great deal of preoccupation with and awareness of a duality of frameworks. Comparable to the plumbing installed across borders, foundational plumbing must also be laid at the individual level.

I think the best thinking now is to think in layers. What you need is very basic plumbing at the bottom of the payment system that connects up every store of value. If it is a bank account, a wallet, a blockchain, it does not matter, they all need to connect together in some relatively easy, technological and open way. Then you can build clever services on top of that, that get the benefit of that basic plumbing and can offer a particular payment solution in a particular context. Chris Hamilton, Chief Executive Officer at BankservAfrica


How to connect both frameworks, then, is a thorny question. Historically, such endeavors were the outcome of bilateral or multilateral, back-and-forth negotiations of the applicable providers and operators. The process must be repeated for every new player that hopes to be on-boarded. It is a costly ordeal that requires consensus among a disparate, often distrusting group. The Bill and Melinda Gates Foundation, through Majoloop, prefers an open-source platform approach. Regardless of who leads the charge, the need for a central 'switch' that can stitch together the quilt of Africa's payments is tantamount. Interoperability is the glue that can unite commercial payments, retail payments, international remittances and person-to-person payments across Africa.

Image courtesy of [US Department Of State](https://www.flickr.com/photos/statephotos/8826657534/in/photolist-erYVLA-687f1k-68bqoj-cxVPJh-7faijy-9WoGGD-9WoKsV-8Lhowf-9WqEaN-9WnPGX-9Wrxds-oaAodH-ExBc88-oaAqcx-o6M3kb-cxVQX3-djYSt6-bVmyBA-aS49nz-aFdKR5-6u42Ff-qzeAJG-pzamkC-aRvbjM-9BeVtK-c8iznu-icWB7X-cxVQxb-UcexZs-cxVSxC-cxVMzG-aoBwWZ-8YRkJP-o8HW17-WsM8Su-Z5Xtqs-o8v3L6-o8GTFQ-XtMXqE-nRjs5r-WsLq4j-bpARbn-22NCiqA-9YVDWJ-bdQWCc-9YXuxN-9YMwmc-pzbt68-nCFpxz-2bcVMXj/)
Click here to subscribe and receive a weekly Mondato Insight direct to your inbox.
Digital Finance,Payments,Cross-Border Payments,Africa,Development
Share this article: