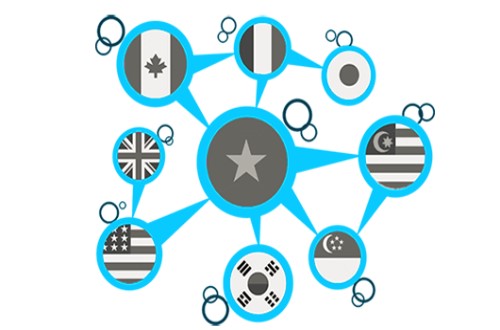 Most countries are fumbling to find the proper footing, momentum or buy-in to coordinate a national campaign for country-wide interoperability. As of May 2017, only 15 countries have achieved account-to-account interoperability. Kenya, never one to lag too far behind, and anxious to curb Safaricom's monopoly, unveiled its awaited pilot last month which allows users of both M-Pesa and Airtel Money to seamlessly transfer across the two while still cashing-out at their own respective agents. Ghana, delayed by a complication where mobile network operators' were unable to plug-in to the interoperable platform, intends to show off a more polished Ghana Interbank Payment and Settlement Systems (GhIPSS) by the end of this February.

Nonetheless, of the 60 plus countries that boast more than one mobile money service provider, 45 of them are defined by a closed loop ecosystem. And yet, some providers, while still shackled to domestic silos, have pursued bilateral or multilateral agreements that open up corridors to international interoperability. In practical terms, that might translate as a refugee or migrant in one country remitting funds from their mobile wallet to the mobile wallet of kin in another. Or, it might manifest as entrepreneurs engaging in small-scale exports and international trade. International remittance and mobile money hubs are often, but not always, the technological bedrock that renders such transactions possible. So, what differentiates the incentives that spur these cross-border, (at times) cross-provider partnerships from their country-specific equivalents and who are the hubs that service them?

Until recently, these claims were little more than optimistic hot air. Tanzania, whose form of interoperability mandated revenue sharing between operators, has circulated the first results of its introduction in 2014. Of the four mobile money providers - Airtel, Tigo, Vodacom and Zantel (acquired by Millicom) - two have seen tremendous growth in interoperable peer-to-peer (P2P) transfers. From 2014 to 2016, Tigo Tanzania witnessed a 17 percent hike, by value, of external in-bound or internal out-bound money movements. Airtel, similarly, averaged a monthly growth rate of 10 percent in its interoperable P2P product segment since the platform's inauguration. Vodacom, a late-comer to the deal, did not observe a change in P2P numbers, either positive or negative, as of the study (a mere six months from after its induction). 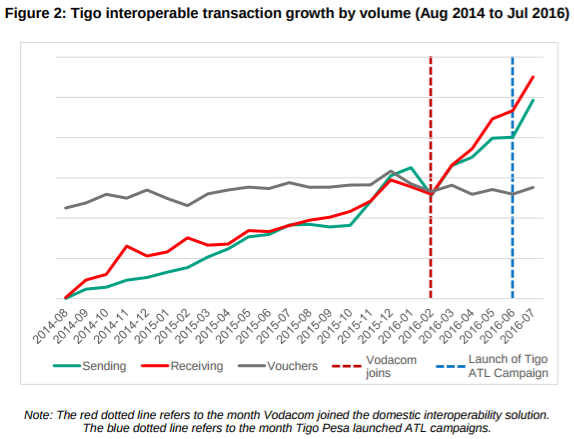 Source: GSMA, The Impact Of Mobile Money Interoperability In Tanzania

Not only has Tanzania's experience calmed some of mobile money providers' worst nightmares, but it has dismantled the argument that off-net vouchers (or a code that allows out-of-network transfer recipients to cash out at an agent at the expense of the sending operator) are a long-term stand-in replacement for interoperability. While the utility of vouchers has, for the most part, remained stable, the trajectory of interoperable P2P transfers is sloped drastically upward. This signals a clear and unmet demand for a purely digital money delivery mechanism, i.e. account-to-account.

In contrast to domestic interoperability, mobile money providers require little cajoling to see the bright side of international interoperability. The dynamics shift, and mobile network operators no longer imagine each other as direct rivals. Instead, they become allies whose combined collaboration might break into industries like trade finance and remittances, which have been monopolized historically by banks and money transfer operators respectively. 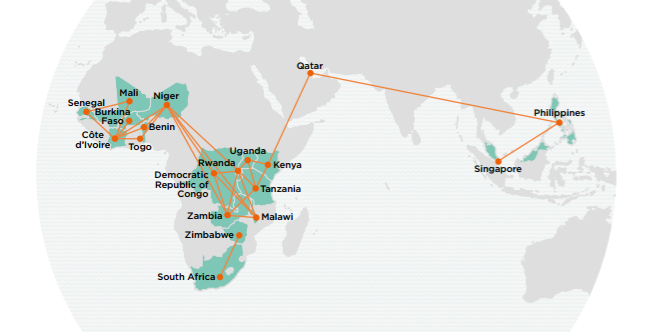 Source: GSMA, State Of The Industry Of Mobile Money, 2015

As far as trade finance goes, international mobile money interoperability is equipping small entrepreneurs with tools never before at their disposal. East Africa is case in point. Of the 29 cross-border remittance initiatives live in 2015, a third were localized to this region, a byproduct of Vodafone and MTN's deal to empower M-Pesa customers in the Democratic Republic of the Congo, Kenya, Mozambique and Tanzania to shuffle money to and from MTN Mobile Money customers in Uganda, Rwanda and Zambia.

Anecdotal commentary has spotlighted the transformative impact of these sorts of arrangements on business and trade. Quartz detailed the plight of Edward Joseph Karemera, a Ugandan fish distributor who also caters to the Rwandan market. On the brink of retiring from commerce, fatigued by long bus rides to transport goods and square away with buyers, cross-border mobile money turned out to be Mr. Karemera's saving grace. It simplified supply chain management, freeing up his time which he then re-purposed to expansion. A Rwandan editor narrated a parallel story, this time starring a Rwandan hide and skin specialist exporting to DRC.

Countries are acting on these trends, and fashioning their trade and export strategy around them accordingly. The Ministry of Trade, Industry and East African Affairs (MINEACOM), in its recommendations to the Rwandan government, encouraged the continued development of interoperable mobile payments which would catalyze SME E-commerce and aid the ambitious 'Made in Rwanda' Program (a bid to fire up exports).

In West Africa, diasporas prompted by economic opportunity have led to large volumes of remittances flowing between countries. Within the West African Economic and Monetary Union (WAEMU), Côte d’Ivoire especially has attracted migrant workers from Benin, Burkina Faso, Mali and more. Hungry to carve out a piece of the action, mobile network operators have put into place a large number of cross-country agreements - both in-house, ‘intragroup’ and intergroup implementation.

And, these bets have paid off. Orange Money, sensing a chance to drive revenue as markets mature in West Africa, identified Côte d’Ivoire, Senegal and Mali as fertile ground for international interoperability. The settlement between Orange's different off-shoots is handled by one partner bank, streamlined too by all parties use of a single currency, the West African CFA franc. Over the course of one year, Orange's market share of formal remittances between the three operations spiked from 6.1 to 24.7 percent. 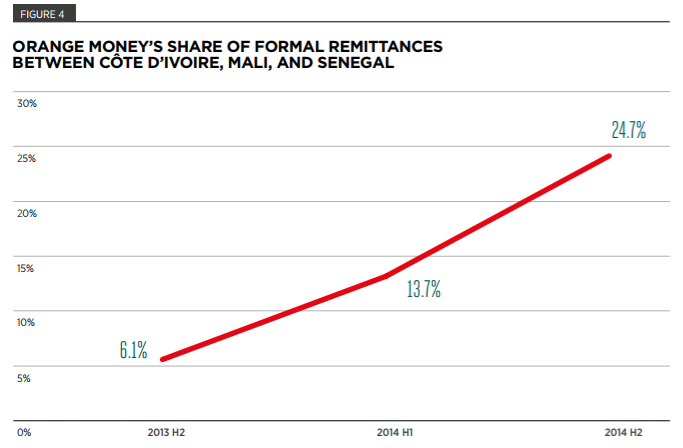 MTN Cote d'Ivoire, keen to replicate this success, sought to capitalize on the region's most prominent remittance corridor - Côte d’Ivoire to Burkina Faso. With limited regional footprint, MTN approached Airtel Burkina Faso, and the two formulated a mutually-agreeable commercial model that incorporated the international remittance hub, Homesend. (Airtel keeps the cash-out fee, while the sending fee would be divided among the three, with 72.5% going to MTN and the remaining 27.5% shared between Airtel and HomeSend.) From the service's commercial launch in 2014 to early 2015, the transaction value traveling over this channel rose ten-fold.

As alluded to in the previous section, direct settlement within an organization spread across multiple markets (like Orange) is an undertaking fit for a bank. However, as mobile money operators branch out beyond their in-house reach, the complexity of the task at hand requires a third-party which not only facilitates the technological components through APIs, but might also advise on possible revenue sharing models, foster intergroup trust and add an extra layer of anti-money laundering or terrorism financing screening.

MFS Africa, the hub behind MTN and Vodacom's dozen-strong east African corridor endeavor, has differentiated itself in its expertise in mobile wallet interoperability, plugged in as it is to the userbase of Airtel, Econet, MTN, Orange, Tigo and Vodafone. Its hub hosts the largest number of mobile wallet connections in both Sub-Saharan Africa and the wider continent at 120 million and 170 million respectively. HomeSend, the creation of Mastercard (the majority shareholder), eServGlobal and BICS, while still competitive in the African market as evidenced by MTN and Airtel's choice of solution vendor, tidies a more robust global presence.

The origins of MFS Africa and HomeSend are rooted in servicing mobile money interoperability. Increasingly, however, as the concept of interoperability evolves from product-specific account-to-account compatibility to interoperability across financial instruments, hubs are duly reacting. Both MFS Africa and HomeSend are invested in the on-boarding of money transfer operators, banks, merchants and more onto their infrastructure. HomeSend explicitly outlined its intentions in 2015 to integrate the 24,000 financial institutions on the MasterCard network into the hub, expanding upon its then predominantly telecom and MTO foundations.

Hubs are aspiring to transcend specialized niches, and instead become the international rails for a whole basket of stakeholders. Perhaps, the future offerings of TransferTo (historically airtime), Earthport (historically banks) or blockchain entrants like Ripple will find a lot more in common with the likes of MFS Africa and HomeSend, and vice versa, as network endpoints become product agnostic.

Sesame Credit: Back Door To A Dystopian Future?