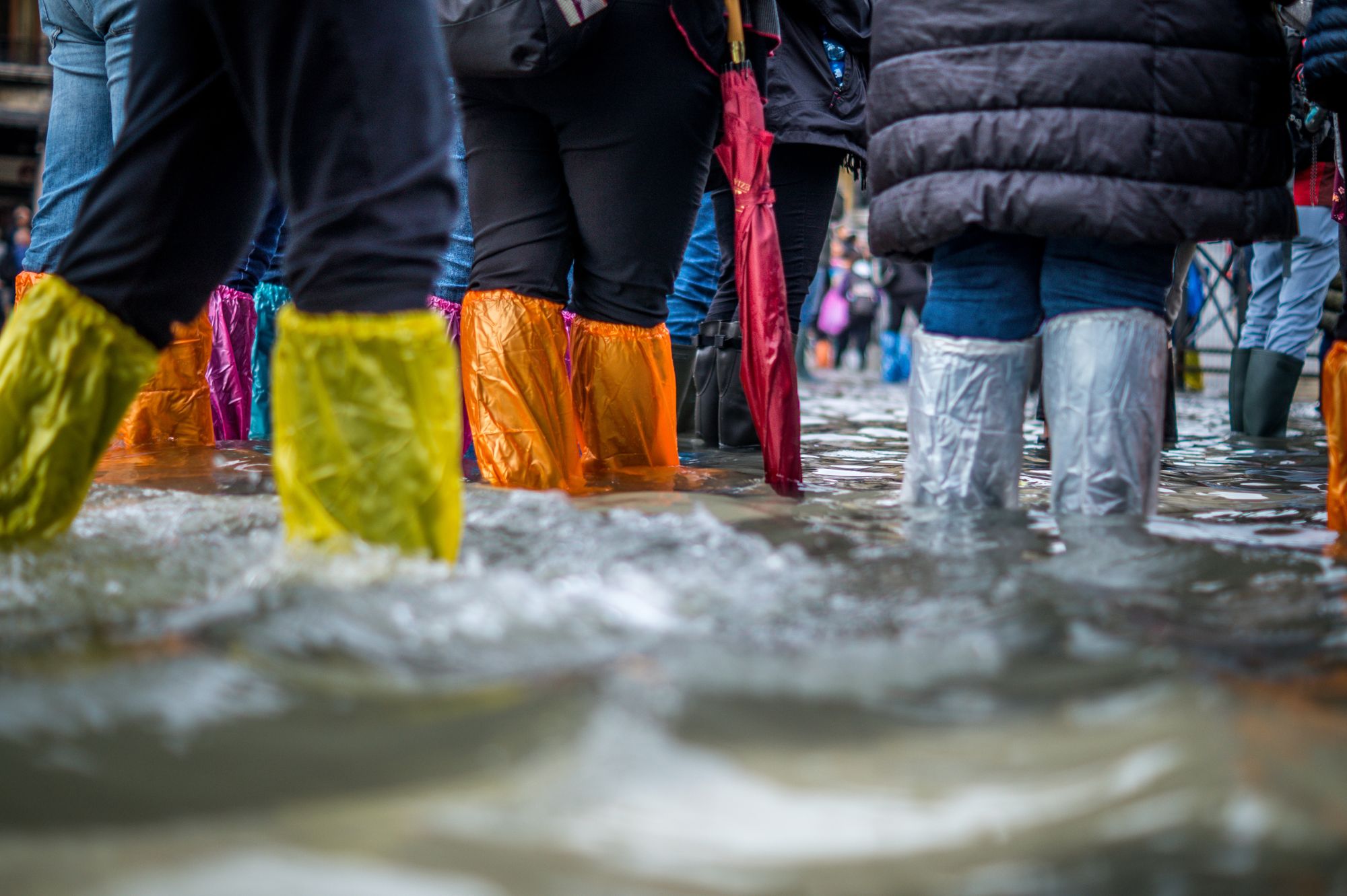 In her nearly ten years running a small grocery store in Kenya, Faith Kemunto’s biggest fear has been waking up one day without a business. A fire ravaging her store, a serious illness or an accident would instantly lunge her back to poverty. The solution to this fear may seem quite straightforward: get insurance. But the reality is more complicated. Kemunto knows little about insurance or how it could be of use to her. In an emergency, she says she would turn to her women’s group or her church. This is the simple reality among many in Sub-Saharan Africa. While many understand what they have worked towards for decades could be swept away in an instant, financial illiteracy keeps them from accessing key financial products that secure them from such shocks. This only widens the gaps in insurance penetration on the continent, especially when it comes to the solution most conducive to the masses — microinsurance. Lacking the immediate benefits to customers of products like mobile money has continued to make it difficult to get the insurtech business formula right in emerging markets like Africa, though bundling is promising a more stable path for the industry — as well as a potential way to gain elusive trust within local communities.

Microinsurance At A Glance

Microinsurance has slowly gained interest with solutions delving into health, funeral, property, business, livestock and credit insurance. Between 2005 and 2016, the number of major insurance companies involved in microinsurance grew from seven to sixty, including industry leaders like Allianz, Zurich and AIG. This number has grown significantly since then, with traditional insurers throwing their hats into the ring. Britam, present in seven African countries, and CIC insurance in Kenya are a couple of the traditional insurers now catering to underserved — though sizable — markets. While data is sparse, there is an estimated 3.8 billion people in emerging markets who are left out by traditional insurance, an enormous figure that’s proven difficult to reduce with such little knowledge or understanding among so many. 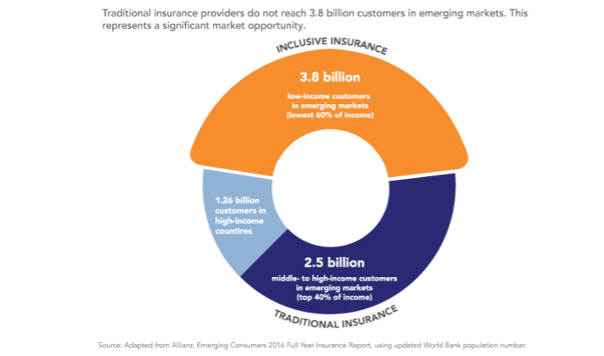 In many places, the importance of insurance simply hasn’t taken adequate social root. In Zambia, a reported 40.9% of the adults had no knowledge of insurance products, while 12.5% did not know how insurance works. In Sudan, farmers were introduced to insurance through a microfinance bank, and it was their first ever encounter with insurance. Even in African economies with greater uptake of financial and fintech products, such as Kenya, the awareness of insurance is limited to city dwellers. And even where there’s some awareness, understanding how insurance works is limited, particularly those of lower income. Kemunto, the grocery store owner in Nairobi, has never heard of business or property insurance. Lucy Nanjala, a seller of plastic items and small housewares, says she has never used any insurance. She mentions having received free maternity services several years ago — not realizing the free maternity service was a form of insurance run by the National Hospital Insurance Fund of Kenya. Such sentiments are common across the board among informal workers.

With penetration continuing to languish now years into Africa’s fintech revolution, how can industry players reach these groups? How can they adequately serve them? According to Ted Pantone, CEO of Turaco, an insurtech startup, there is, without question, a demand for products aimed at these markets — but a distribution model that works is the key to closing the gap in insurance.

What’s proven so far to be the most viable distribution model is one where insurance products are bundled with other financial and non-financial services. Insurers leverage partnerships to bundle up their products with a pre-existing service or product, thus softly introducing it to a less knowledgeable market. Zambia’s AYO Insurance has embodied this by bundling up a life and hospital insurance product with MTN services so that every time a customer loads up airtime, they receive 30-day partial hospital coverage. A different scenario manifests through the bundling of credit facilities with insurance, where a customer can only receive insurance benefits if they pay back their loans.

By providing a ready-set distribution and payment collection system along with a built-in market, bundling lowers the barriers to entry for the insurance company. It also makes it easier for the consumer to access it without taking further steps beyond their usual activities. Making such products free further encourages participation by consumers who would have nothing to lose by trying it out.

Benefits of bundling services only multiply when the products are presented in bite-sized pieces. Fast-moving consumer goods in the market are the best examples of this. Nescafe coffee in a 1.6-gram sachet or the 30-gram detergent pack for a day’s use are common items at the local grocers’ store in a place like Nairobi, catering to the day-to-day consumption of individuals.

“We are a more transactional society. People are more concerned with, ‘What can I have now?’ than what could be had in the future.”
Anne Kamau, Co-Founder, AB Consultants

In this spirit, bundling allows people to purchase insurance in smaller quantities while accessing more immediate and tangible services. Associating insurance with an immediate benefit is critical to getting consumers to regularly pay for these services, explains Siani Malama, director for the SSA region at Democrance, an insurtech that serves emerging markets. As Malama sees it, even those dismissed by companies as “poor” would pay for a service if they saw value in it — and if it was presented to them in a way that makes sense to them in their current lives.

“You don’t want to ask someone to create a new behavior to buy insurance. You want to work within the existing customer behaviors and add insurance to those existing ecosystems.”
Ted Pantone, CEO, Turaco

Bundling up services has proven critical in leveraging relationships with other companies to build up knowledge of and trust with insurtechs over time. This model has begun to pique the interest of mainstream insurance companies, with Safaricom and Britam now piloting a program to bundle up Internet packages with personal accident coverage. 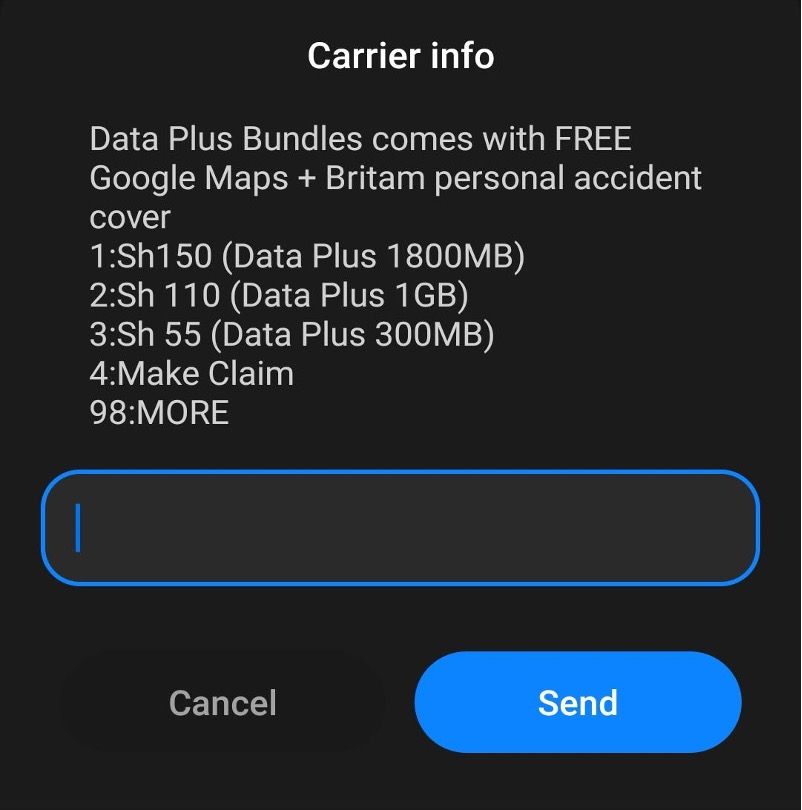 But bundling-based models and partnerships are not without fault, as access becomes reliant on the partnering companies. Clients can only access Turaco's insurance products through its strategic partners like M-KOPA and One Acre Fund. Similarly, AYO MTN products can only be accessed by MTN users.

With such limitations, one may wonder whether a B2C model offers a higher ceiling for insurance uptake. Anne Kamau, co-founder of Kenya-based microinsurance consulting firm AB Consultants, believes a B2C business model would be ideal for serving underserved markets with insurance products. Just as B2C models enabled immense, rapid growth in microfinance and mobile money, a similar approach in insurance would enable wider access to products. Nonetheless, B2C models have experienced slower growth from the mass markets. Coverapp, a Kenyan B2C insurtech platform, is available to anyone yet has had just over 5,000 downloads since its inception. Nearly across the board, traditional insurers have experienced slower growth compared to leveraged partnerships — a critical deficiency considering insurance’s need for high volume right away. For microinsurance companies, an aggregator or intermediary to adequately serve and reach the masses simply remains more cost-efficient, if limiting their ceiling.

Deliver It With A Manual

Relying on partnerships with companies offering what’s perceived as more salient solutions for customers can’t be avoided without improved financial literacy regarding insurance among the masses. Stepping back to review mobile money’s early years and its successful progression from non-existence to a thriving service offers some lessons. Mobile money’s success resulted in large part from their penetration in key elements of the community that could educate and engender communal trust in a way that forged legitimate bonds between a company and community. Turaco has utilized its partners' agent network to educate and sell insurance products to clients, but no company has made major inroads in communities nor utilized the agent networks at such a scale as mobile money did. Just as agents offering airtime top-ups proved critical in also expanding interest in mobile money, so can more people learn about insurtech options as one withdraws cash or pays their bills at their local agent’s kiosk. Microinsurance would stand most to benefit from such models taking root.

Beyond agent networks, gamification presents a different front in the journey to financial literacy. ResilientME, a card game by Anne Kamau and her colleagues, was successfully deployed to educate over 40,000 farmers in Sudan, the majority of whom had insurance bundled with their loans in a partnership with Syngenta Foundation an Ebdaa Bank but did not understand it. 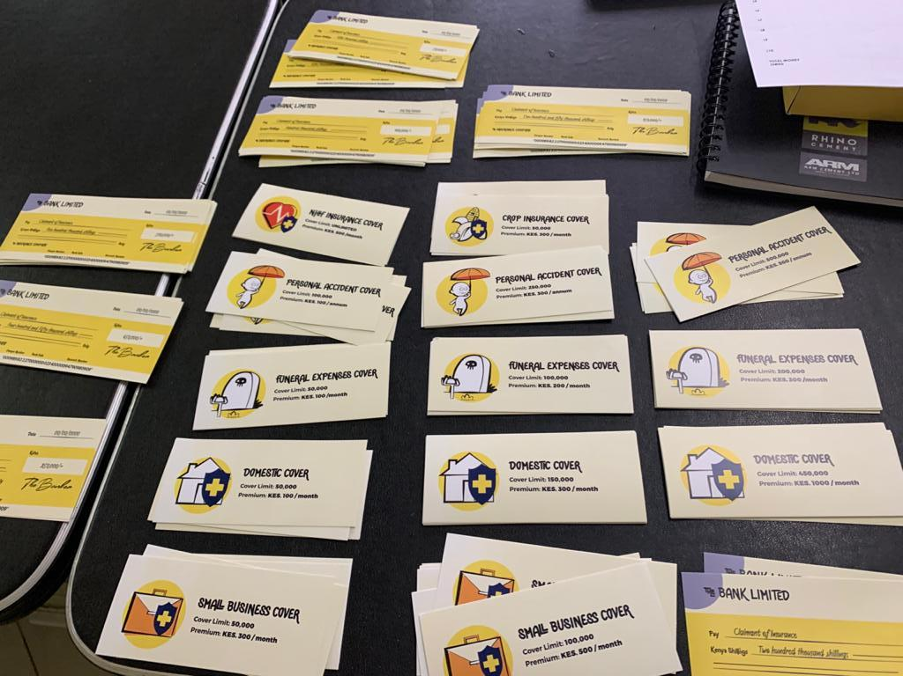 ResilientME, slightly similar to Monopoly, enables peers to actively play out different scenarios that mimic real life, allowing them to experience insurance’s role in risk management. Designed to be played among peers, the card game can be deployed among SACCOs, welfare groups and other cooperatives. These gamification efforts are the kind of steps needed throughout markets to drive both interest and understanding in insurtech offerings that’s remained stubbornly low.

While challenges dealing with culture and scale persist, the insurtech market is seeing progress nonetheless, if in small and localized waves. Until a critical mass in financial literacy is reached however, insurance players will to a significant degree remain subservient to larger partnering companies in adjacent industries like MTN. While this trend is likely to persist, the hope remains that eventually, the B2B2C model can be what expands awareness in the market, lifting the industry out of being viewed as a luxury add-on to a long-term necessity.

ChatGPT: The Challenges And Opportunities Coming To Financial Services

Fintech 2023: Looking Back To Look Forward