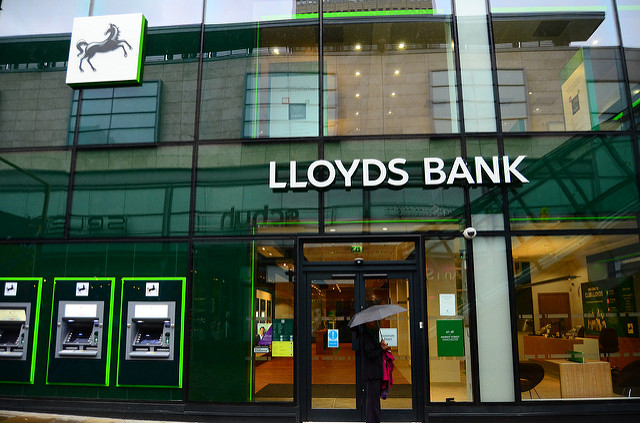 In a counter to sluggish interest rates, ever more complicated and taxing compliance regulation, and a weakened consumer market segment, bank executives across North America and Europe are taking the ax to 'superfluous' brick-and-mortar bank branches. And while macro-economic factors, most of which represent the residue of the 2008 financial crisis, certainly led banks to water, a meaningful transition to digital channels requires a critical mass of customers willing to migrate to mobile or desktop banking in lieu of more traditional means.

Therefore, the rise of the digital user is nothing short of a bargain for banks. What is the readiness of the digital user, though, to forego completely a brick-and-mortar fallback, and to what degree does that vary from North America and Europe to Africa and Asia? Or, are banks merely capitalizing on a phenomenon before its due course, and stranding customers not yet comfortable to go it (digitally) alone?

Facts On The Ground

The last few years have bore witness to a somewhat jarring pace of bank branch closures, and the process has morphed from 'pruning' excess to deep cuts in infrastructure. Since 2012, JPMorgan Chase has trimmed national network coverage by 9 percent, while Bank of America has pursued a more aggressive strategy, shuttering the equivalent of 15 percent of its brick-and-mortar posts.

Even Wells Fargo, which had been a last stand of sorts and resisted the urge to shrink network footprint, intends to close shop at 400 bank branches by 2018, on top of the 68 locations deemed redundant and unnecessary in 2016. And while the company claims this is a calculated move that merely reflects surging demand for online banking, Wall Street analysts have quipped doubts, and speculated that the fake account scandal may have forced the bank's hand.

Across the Atlantic, similar forces are rattling the banking sector. While countries such as Germany and France have had a more even-keeled approach to cutbacks, Greece, Ireland, Italy and Spain have led the charge in severe, belt-tightening campaigns. In the United Kingdom, HSBC will have halved its network presence - from 1,301 locations in 2011 to 625 in 2017 - after it follows through with the most recent wave of closures, approximately 117 this year. Of interest, HSBC explicitly blamed digital banking for the culling, citing internal findings which estimated that the number of customers transacting at physical branches had dropped by 40 percent, all while digital transactions have seen a steady rise in popularity.

The trend in emerging markets, from Africa to Asia, is less linear. For one, there are only, on average, 50 bank branches and ATMs per 100,000 adults in developing countries, against the 140 in advanced economies. There is evidently less wiggle room for network contraction as financial infrastructure has not reached the same degree of pervasiveness. And while many international banks are receding and withdrawing from 'frontier' consumer banking settlements, both pan-regional and domestic banks are quickly filling in the gaps.

Asia-Pacific has been particularly characteristic of this, and the growth of home-grown players has translated into a constant expansion of brick-and-mortar banking, fueled by urbanization and a swelling middle class.

Knock Knock. Who's There?

Children jokes aside, a little bit of due diligence can shed light on consumer behaviors and expectations - a first step in evaluating the life expectancy of branch banking. In the United States, alone, opinion has shifted from an openness to dabble in digital channels to an active embrace of it over the course of the last five years. Users are nearly twice as likely to engage financial institutions from wholly digital mediums now - whether that be mobile, desktop, or a combination of the two - than they were in 2012. 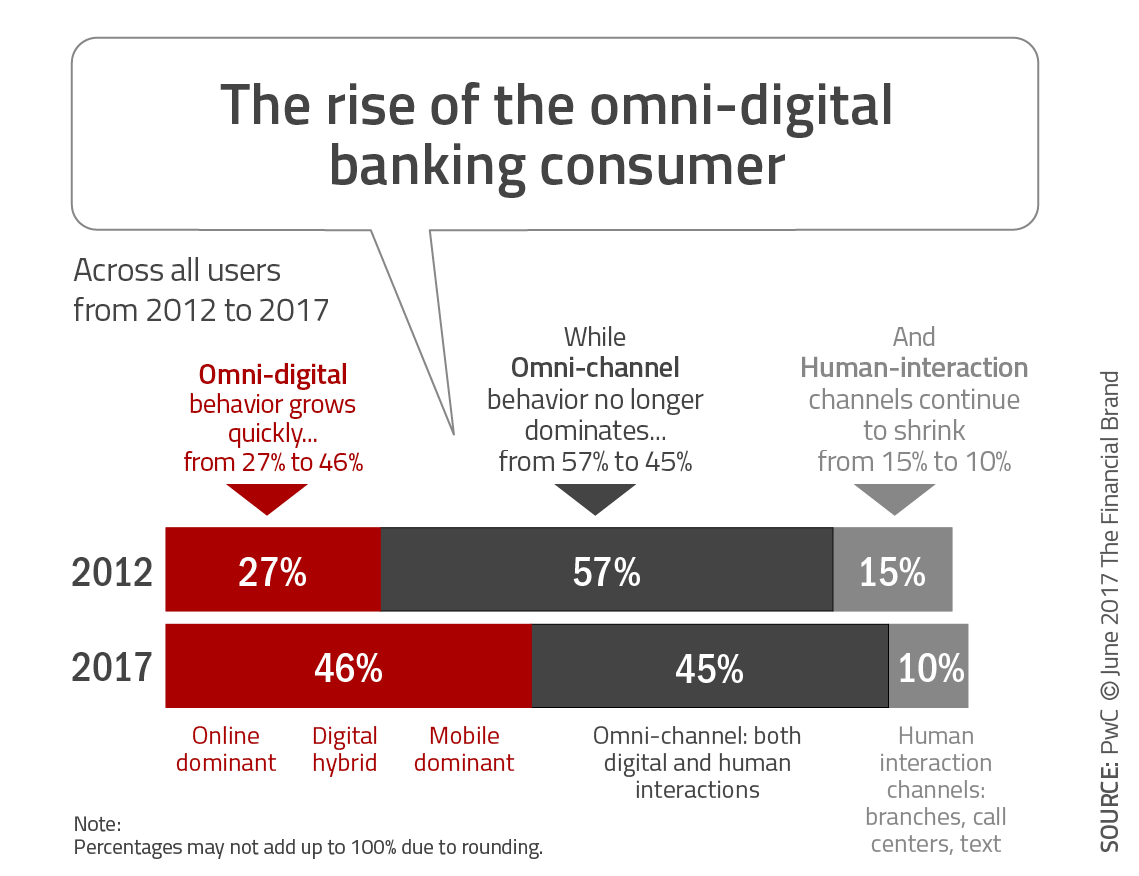 However, banks must not be so hasty to conclude, then, that it is open season on branch networks. Within that very same PwC survey, another nugget of information reflected the nuanced nature of consumer psychology. A majoritarian 62 percent believed that a grass-root, local presence was still necessary.

When overlaid with age, race, or socioeconomic distribution data, bank branch closures in the United States, too, become fraught with ethical asterisks. Indeed, network reductions disproportionately impact the elderly, poor and minority communities. The abandonment by banks of less affluent consumer segments has, in part, helped ignite the firestorm of predatory payday lending, which often relies on storefronts in under-served neighborhoods.

Ironically, while brick-and-mortar is more likely to be the banking vehicle of the poverty-stricken in North America and Europe, in Africa, Asia and beyond, it is through digital finance (or to be more precise, usually mobile money) that most are thrown a line to financial services. And, consumer attitudes clearly mirror this reality. 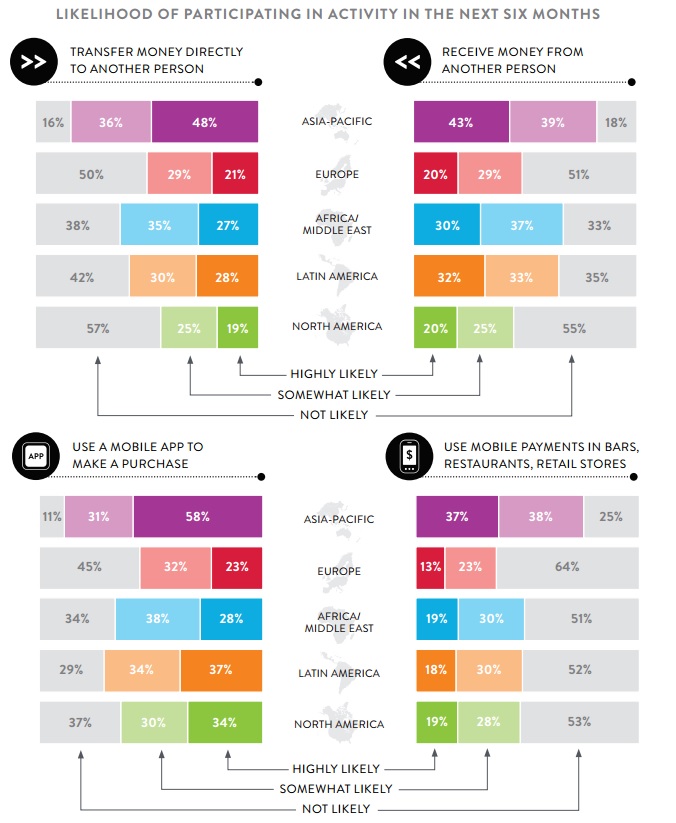 Across the board, receptivity to - or at least consideration of - a variety of mobile-based transactions is far more entrenched in Africa, Asia-Pacific and Latin America. With the exception of the use of mobile payments in bars, restaurants or retail, European and North American respondents were much more resistant to mobile payment use cases than their African, Asian and Latin American counterparts - exemplified by the larger percentage of 'not likely' segments. These mentalities, then, would presumably extend or bleed into comfort levels on mobile-only banking. If a user is amenable to conducting other sorts of financial activity digitally, it seems reasonable that banking would not be singled out as an exception. 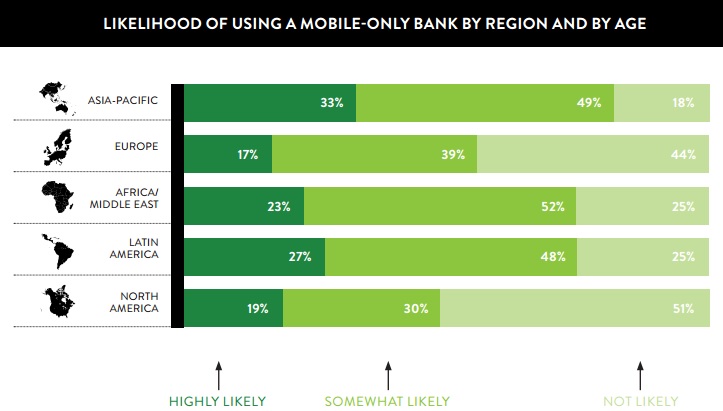 This intuition appears to be reinforced by the data. The percentage of survey participants that fall into the 'somewhat likely' or 'highly likely' category, and would debate enrollment with a mobile-only bank, teeters around the 75 percent mark for Africa and Latin America, and topples the 80 percent mark in Asia-Pacific. North America, conversely, is just shy of 50 percent, and the plurality is not keen on the concept of a mobile-only bank. Europe, while marginally better, still barely exceeds 50 percent.

Moving Forward Is Not A Straight Line

Although most emerging markets are still in the midst of a slow, gradual brick-and-mortar bank branch build-up, over the long-term, the conditions seem more favorable to side-step physical networks. Consumers in these markets have had consistent doses of digitized financial services, which in many cases, were the first exposures to formal banking.

The same does not quite hold true in North America and Europe. Digital finance may be an unintentional culprit in further isolating vulnerable pockets of people from reputable financial institutions. Therefore, if branch closures are to continue unencumbered, digital finance needs to better involve those on the margins of finance - it cannot be a mechanism that simply filters them out.

Even with an uptick in digital banking, though, the brick-and-mortar branch will probably evolve before it evaporates. Already, there are precedents of banks leveraging parallel networks to 'fill-in' and offer basic, popular in-person services. In 2012, most banks in the United Kingdom had opted into an agreement with the Post Office, which allowed customers to deposit and withdraw funds at the 11,500 post office locations nationwide, in addition to cursory checking of account balance.

So, are we entering the dark days for branch banking? Dark days is too extreme, and dog days might be a better description. While brick-and-mortar banking is certainly at a crossroads, and its utility is becoming hazier or even lethargic and without innovation, its existence - in totality - is not really up on the chopping block.

The Winners And Losers in Mobile Money