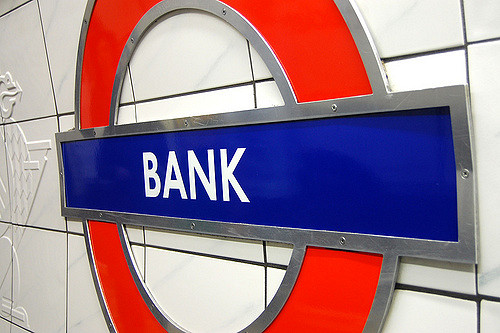 Even before the election of President Donald Trump foretold the passing of a tax reform act that would slash corporate tax rates in the U.S., America's big banks had already emerged from the depths of the financial crisis at a sharper clip than Europe's big financial institutions, which remained entangled in the euro crisis. 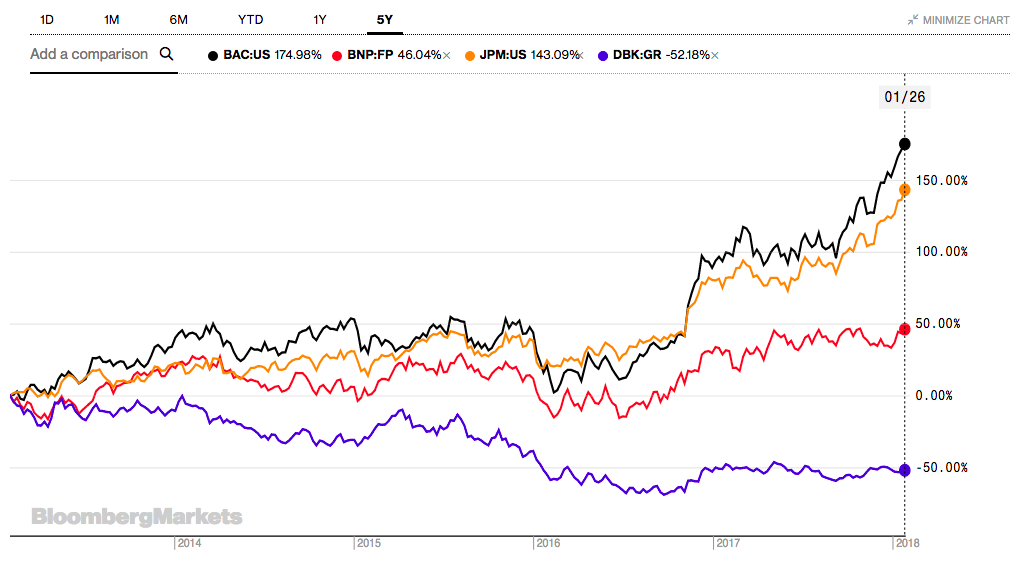 Retail banks in the U.S. appear, finally, to have hit upon a sustainably profitable model, after a decade of crisis and cutbacks. Bank of America (the U.S.'s second largest bank by assets), for example, hit a significant milestone in Q2 of 2017 when it posted profits of more than $2bn for the quarter. Having slashed jobs and branches, and undergone significant restructuring in response to the Dodd-Frank Act financial regulations, Bank of America and its U.S. peers also undertook significant digital transformations that brought them up to par with Europe's banks.

By way of contrast, across the Atlantic, the banking and fiscal crises in Ireland and Greece created a continued drag on European banks' fortunes, as they too found themselves adjusting to new and significantly tighter EU and ECB regimes. But in addition to new regulations designed to avoid a repeat of the catastrophe of 2007/8, Europe's banks have faced some potentially very tough additional headwinds in the form of the Revised Payments Services Directive (PSD2), and the EU's cap on interchange fees that was introduced in 2015, outlawing fees of more than 0.3% of the transaction. These two factors alone, according to one recent report, have the potential to knock over a third off British banks' retail profits by 2020, without even factoring in the emergent mobile payments revolution that is slowly but surely taking root.

As the post-Millennial generation reaches adulthood, this first truly digital-native generation will have demands and expectations quite unlike anything that retail banking has known before. Mobile devices will be the default: consider Apple's recent iPad advertising campaign, "What's a computer?" (even though the sentiment was not universally appreciated!)

A generation used to receiving instant, frictionless and personalized digital services is likely to have no truck with fumbling with 16-digit numbers embossed on pieces of plastic that need to be carried around.

Indeed, it is in part in recognition of that fact, and an acknowledgment that banks are not necessarily the entities best placed to meet emergent and anticipated demands, that PSD2 is intended to allow third party payment services and fintech companies to both compete with banks and create partnerships with them in a much larger payments ecosystem than the old model that consisted of banks and bank-owned card networks. Some believe that this sort of European-style "tough love" will leave the continent's banks in better shape to contend with the digital transformation than their American counterparts, but if that is to be so then additional major changes are going to have to be embraced.

As Mondato Insight has previously noted, one of the reasons why mobile device manufacturers' "X-Pay" plays have fizzled rather than exploded is that merchants have little incentive to push or promote them. There are no direct cost savings to be made for merchants in pushing customers from one entry point onto the card network payment rails over to another entry point onto the card network payment rails, and merchants have significantly more sway over customers in the checkout line than do Apple or Samsung.

However, it is this very cost structure that PSD2 takes square aim at, since merchants (in a recent U.K. example) can pay almost 0.5% above the (capped) interchange rate to process a transaction. This leaves plenty of opportunities for third party payment initiation service providers (PISPs) to undercut the status quo and give merchants an incentive to nudge consumers over to the new payment platforms. This potential is most likely to be initially realised in online transactions, which, naturally, will increasingly be the norm for the digital natives of Generation Z ("Gen Z" or "iGen", the jury is still out.)

The larger risk for Europe's banks is that they get increasingly frozen out of the banking and payments cycle, sinking into the background as a mere utility, while their "customers" attend to their financial and payment needs via a variety of third party apps that are accessing the customer's data held by the bank via the APIs that are mandated by PSD2.

The nightmare scenario, under these circumstances, is a vicious circle whereby the banks lose sight of increasing amounts of granular data to PISPs and account information services providers (AISPs), creating a vicious circle of inutility and data loss. AISPs, such as Moven, can then sit (from the bank's perspective, parasitically) on top of the bank's APIs, allowing customers to "Movenbank", without Moven having to undertake the expense and risk involved in becoming an actual bank (see a previous Mondato Insight for more on "Banking's Uber Moment".) Consequently, some banks have dragged their feet in living up to their legal obligations with regard to Open Banking, as it currently contains nothing but downsides.

What we’re doing is best described as banking rebooted because everyone needs banking, they just don’t need banks... Although we admit that some might prefer that we call ourselves a fully-fledged ”2.0”, 21st century, non-bank, mobile, social media-enabled, PFM service that makes banking fun but that isn’t technically a bank. We just think that sort of name would suck.Moven, 'When is a bank not a bank?'

But it's clearly not all doom and gloom for Europe's banks, for despite some difficult years in the relationship, customers ultimately still trust their own bank, even if trust in "banks and bankers" as abstract concepts is not what it once was. Whether or not Oscar Wilde was right that imitation is the sincerest form of flattery, in order to thrive and not just survive, banks are going to have to increasingly look and act like PISPs and AISPs in order to beat them at their own game, or at the very least be able to compete.

Alternatively, if they are unwilling or unable to successfully mimic AISPs and PISPs, it will be incumbent on Europe's banks to replace the parasitic relationship between themselves and the service providers accessing their APIs with a symbiotic one, and the only way to achieve that will be through the creation of additional value for their shared customers.

These new relationships are most likely to be achieved by deepening the levels of trust between the bank and the customer in order to gain permissions to grant access to more granular levels of data through APIs that access a wider range of data than those stipulated by PSD2. Banks will need to tread warily, though, for the likely accusation that "banks want to sell your data" will be both simultaneously accurate and misleading, making it difficult to counter, even if the value to all parties concerned should be obvious. Under this scenario, ironically, the third party partners might be better placed to secure the bank customer's permissions than the bank itself, particularly with the iGen who grew up in the shadow of the financial crisis.

In order to win back the trust of the post-Millennial generation, banks are going to have to place themselves at the heart of the cohort's daily and commercial digital lives, creating and aggregating value for the consumer through expansive, co-operative and innovative APIs that help create frictionless and personalized services for a generation of digital natives who may not even know "what a computer is." And although Europe's banks have been forced to address this challenge earlier than their peers across the Atlantic, the upside is that they will also have to learn the lesson sooner than their peers across the Atlantic. Just maybe, Europe's banks short-term pain may be their long-term gain.