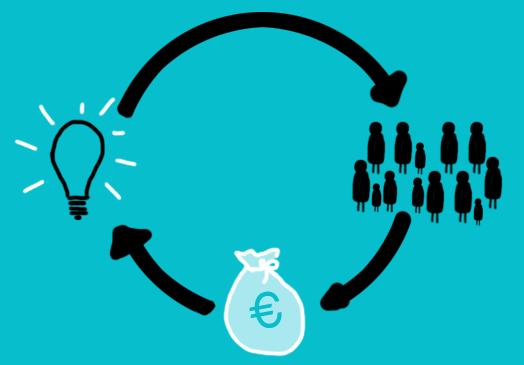 Those invested in the plight of Micro, Small and Middle Enterprises (MSMEs), especially ones settled in emerging markets, are quick to bemoan the credit gap. A 2017 assessment by the International Finance Corporation (IFC) pegged the credit gap – or the difference between the actual credit extended and the total credit required – at 5.2 trillion USD for formal MSMEs and 2.9 trillion USD for informal MSMEs across 128 developing countries. But, with most banks in these regions fixated elsewhere with bigger fish to fry, MSME finance has yet to fall into its respective niche. Crowdfunding, however, might be a viable antidote to the credit-line troubles of ambitious startups left in the cold by traditional finance structures.

Crowdfunding is hardly an absolute concept. To the contrary, only three loose established principles unite competing models. All forms of crowdfunding involve (i) the raising of funds, often in small, disparate amount (ii) from many investors (iii) through a digital medium or technology. By most accounts, that is where the similarities end. Experts generally agree on the four branches of crowdfunding (donation, reward, debt, equity), each of which either subtly or markedly differ in purpose, beneficiary and expectation of return.

According to the historical annals of crowdfunding, donation and reward-based models predate debt or equity variations. The likes of Indiegogo, Kickstarter and Kiva have had a years' long head start to financially-incentivized counterparts like AngelList, Lending Club and Prosper. This evolution is the consequence of regulatory burdens. Non-financial return models are generally outside the purview of financial regulators - a privilege not granted to debt or equity crowdfunding activities. The existence of the first phase (donation and reward) often primes regulators for the entrance of the second phase (debt and equity), who will then usually attempt to nurse the industry while simultaneously strengthening investor protections.

Africa's crowdfunding market is still in its infancy, reflected in its model distributions. In East Africa, which captures the continent's largest market share at 41 percent, donation and reward-based models constitute nearly 80 percent of all crowdfunding transactions. That is a far cry from global benchmarks, which heavily favor debt crowdfunding (90 percent of crowdfunded deals worldwide entail debt financing). 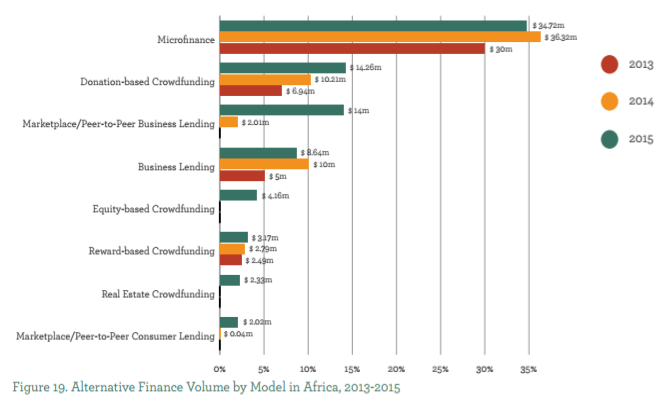 As laid bare by the chart, non-investment based alternative financing schemes overrun the crowdfunding landscape in Africa. Some localized platforms have emerged, such as the mobile money enabled M-Changa in Kenya which has empowered Safaricom MPESA, Airtel Money or Equitel registered SIM card users to practice “Harambee”, translated as community fundraising, digitally. However, the vast majority of microfinance, donation and reward crowdfunding funneled into Africa originates from outside of it, facilitated by Western headquartered third-party platforms (like Kiva). These little truths caught the eye of the Cambridge Centre for Alternate Finance, who then designated such flows as, in effect, informal 'aid' money.

Of course, crowdfunding models without financial gain too deserve their due place in the ecosystem. And, MSMEs often benefit from the trickle-down as small business owners ring their respective networks' doorbells for financial assistance. But, human benevolence is not what unlocks real, unfettered access to capital for MSMEs. Instead, human greed appears to be the primary motivator. (For perspective, of the total 145 billion USD of alternative finance generated in 2015, less than 1 percent in value was hatched by donation and reward-based models).

So, it would seem fair to say that African MSMEs are still waiting to unwrap their golden ticket for entry into Crowdfunding's equivalent Chocolate Factory. In spite of that, indications of change are turning up. From 2013 to 2015, MSME debt crowdfunding in Africa skyrocketed from nearly non-existent to 15 million USD (see figure 19 above). This has largely been driven by economies like South Africa and Nigeria, who have defected from the norm.

And, it is not just shifts in crowdfunding model ratios registering - homegrown debt and equity platforms are crystallizing and scaling. The most esteemed of which is South Africa's RainFin (Barclays Africa Group Limited acquired a 49 percent stake in the company in 2014). Its strategic partnership with Absa last year allowed the platform to refine its digital capabilities and offer unsecured working capital term loans within 48 hours after application, quickly expanding its reach to overlooked MSMEs.

Asia is not only farther along the crowdfunding development curve, but is home to the industry's behemoth, China. In 2016, China accounted for 85 percent of the global alternative finance market - a staggering 243 billion USD. That tremendous sum shrouds others belonging to the Asia-Pacific cohort, with 99 percent of the region's alternative finance market concentrated in China. 56 percent of China's 243 billion USD value was manufactured by consumer debt crowdfunding, followed by business debt crowdfunding (58 billion USD).

It appears, too, that the proclivities of the Chinese market have either rubbed off on, or inspired, its neighbors. Sans China, Asia-Pacific amassed 2,004 million USD in alternative finance with the marketplace model rising up as the clear favorite (see figure 4 below). 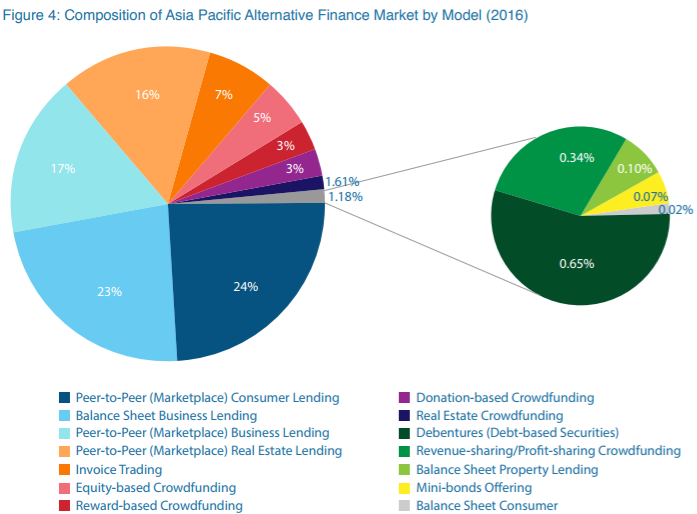 In contrast to Africa, debt crowdfunding covers more than 87 percent of Asia's activity. Equity crowdfunding trails at a distant second, bankrolling 6.6 percent of deals. Non-investment based alternative financing schemes form a modest part of the pie - 3 and 2.75 percent for reward and donation-based models respectively.

The opportunity for profit, compounded by regulatory friendliness, has encouraged local and internationally-oriented platforms alike. Country-specific and specialized sites include Maneo in Japan, MoolahSense in Singapore or MoneyMatch in the Philippines. Increasingly, too, there are Pan-Asian solutions like Crowdo, which operates in Indonesia, Malaysia and Singapore, Monexo, which is active in Hong Kong and India, and Funding Societies, which is popular in Malaysia and Singapore.

And while new and improved debt-crowdfunding concepts seem to be popping up faster than weeds in Asia, especially China, the impact on MSMEs is not exactly straightforward. According to the World Bank Enterprise Surveys, even with 75 percent of all crowdfunding installments dedicated to business purposes in Asia-Pacific (i.e. the majority of consumer marketplace loans are re-directed to business expenditures), MSMEs within the EAP zone are still disproportionately financing investments internally. 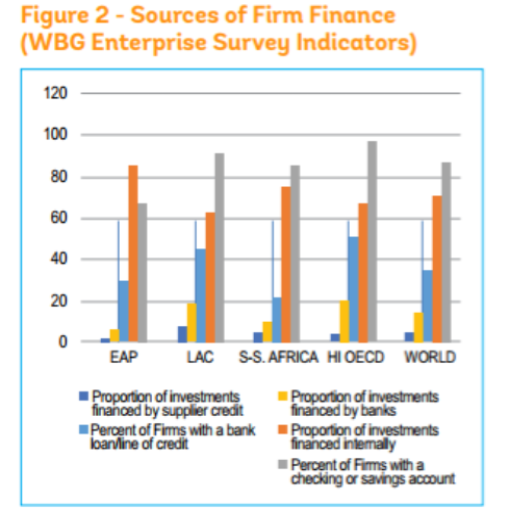 Despite a more sophisticated range of debt-financing platforms at the disposal of Asian MSMEs, the demand for credit is still outpacing the supply. Indeed, firms in EAP have a lower proportion of investments sponsored by banks and supplier credit than is the case in Sub-Saharan Africa. Crowdfunding, then, has yet to truly challenge the monopoly on credit held by formal finance. So while crowdfunding may be the golden ticket to metaphorically grant MSMEs passage to the chocolate factory, there is no guarantee they will walk away as prosperous or duly compensated as Charlie himself.