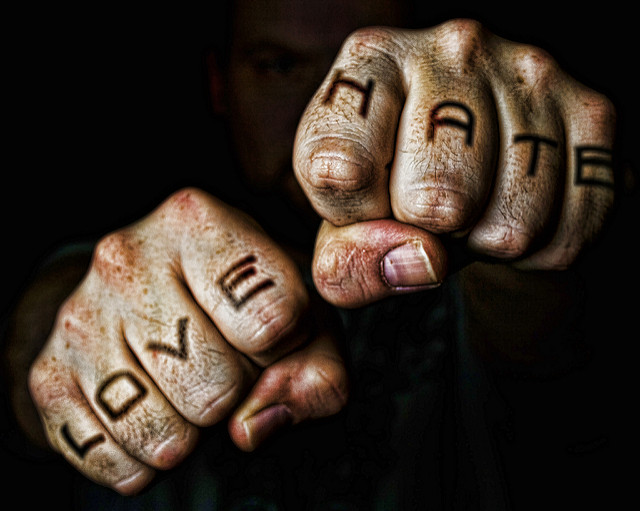 In the aftermath of Charlottesville, renewed scrutiny has fallen upon hate groups, their digital hives and their access to online funding. Pressure by civil society is mounting on the likes of Facebook, YouTube, Twitter, Paypal, Stripe and more to not only disassociate from such company, but to also block their participation on the wider web and avenues to donations or transfers from 'sympathetic' thinkers. But, who is worthy of digital alienation, or what that would look like exactly, are philosophically-explosive questions, and obvious or simplistic answers should be viewed critically.

Nearly all of the technology providers quickly, or sometimes, quietly, point to their terms of service or guidelines as the first line of defense against accusations by activists of indifference, enablement or aggrandizement. The fine print of most big-name tech brands (like Paypal or Facebook) share a comparable condition in the acceptable use policy, which explicitly bans the promotion of hate, illegality and racial intolerance.

Others, such as Godaddy, however, prefer to keep the text more open-ended, and only consider incitement to violence as the clear-cut line for expelling. Recently, Godaddy found the Daily Stormer (often described as a white supremacy and neo-Nazi platform) guilty of such behavior and showed it the door after it published derogatory remarks directed at the victim of the Charlottesville attack.

Although these guidelines exist, enforcement is far from consistent. In fact, the service provision that accompanies opening or maintaining hate groups' accounts is often automated or algorithm based, which means that conduct violations sometimes go unnoticed, that is until outrage boils over from incidents like Charlottesville.

Though, even in a perfect world where technology companies have a more granular view of their clients' activities, some intellectuals are wary of an ex-judicial internet equivalent of the death penalty. Servers like Godaddy and Google are the pipes of online infrastructure, and denying rights to domain names is a much deeper intervention than Facebook, Twitter or LinkedIn merely censoring content. Many, rightly so, fear that such actions represent a slippery-slope that could become increasingly politicized and polarized.

A Penny For Your (Hateful) Thoughts

As to be expected, it's not only server operators or social media sites who find themselves on the hook. Digital finance processors and intermediaries are sitting in an awkward position as details of hate groups' operations come to light. A survey by ProPublica was far from flattering, and singled out specific players as go-to choices for hate groups hoping to monetize their way of thinking.

According to the information gathered by ProPublica, of the websites with the highest volumes of traffic that have been designated as extremist or hate-spewing by the Southern Poverty Law Center (SPLC) or the Defamation League, a hefty 39 of the 69 had tapped into clicks, ads, merchandise peddling and donations as means to generate income. Paypal was by far the favorite in terms of payment integration, powering 23 of the sites.

Even as Paypal washed its hands of organizations like Jihad Watch (deemed anti-Muslim) or VDARE (regarded as anti-immigrant), alternatives are not usually more than a stone's throw away. Stripe, which does not proscribe the spread of hate in its terms of service, was the second place provider, servicing 10 of the groups. Even if Stripe was to change its (policy) stripes, inklings of decentralization and deregulation in currency - epitomized by Bitcoin - are rippling into much less controllable waves.

Pax Dickinson, the ex-Chief Technology Officer of Business Insider, intends to shepherd the crowd-funding site Counter.Fund as an antidote to 'power-giddy' payment processors that target the alt-right. It will be Paypal, this time, on the receiving end of the cold-shoulder. Instead, Mr. Dickinson will rely on Bitcoin to shuttle fund transfers.

Pro free-speech social network Gab - at least, according to its own sales pitch which runs counter to Facebook and Twitter as they become increasingly embroiled in censorship battles - too, plans to enter the world of cryptocurrencies to combat advertisers holding users [and their opinions] hostage. Chief Communications Officer and Global Affairs Director Utsav Sanduja was quite direct in a recent interview with CNBC in prophesizing the demise of the big kids on the payments block.

So then, does the distancing of Visa, Discover or Paypal from hate groups actually achieve anything? While it is certainly true that it throws a wrench in Jihad Watch collecting the $75,000 worth of donations of its $100,000 income, or VDARE soliciting more than $267,038 of its $293,663 earnings through contributions, it does not categorically disarm them. It only takes one Peter Thiel level Silicon Valley type to disagree with whom is being cut off from financial services and decide to invest in new payments architecture. That, and organizations such as Counter.Fund, Gab and Hatreon are already scouting ways to leverage cryptocurrencies.

There Are No Easy Fixes

At the heart of it, though, is the lack of societal consensus as to whom deserves the label of hate group. At what point, if ever, do proponents of decreased or halted immigration cross the line? Is the criticism of Islam as an ideology and theology too often conflated with anti-Muslim bigotry? There are no black and white answers, and therefore financial intermediaries cannot create protocols to dictate when they should turn off the tap, so to speak, on groups. As an example to the ambiguity, Paypal reinstated service to Jihad Watch due to backlash, a move which was generally applauded in right and center-right circles.

There, too, are no pure and non-partisan arbiters or gate-keepers of the list of hate groups. The materials of the SPLC were used as a starting point by many financial institutions but that, in and of itself, ruffled feathers across the political spectrum. The SPLC has amassed more than a $319.3 million endowment from frequently raising more money than it needs to operate.

An in-depth Politico editorial this June lodged compliants against it for manufacturing hate to keep its biggest benefactors listening. Its most controversial 'hate designations' include republican senator Rand Paul and British liberal democrat Maajid Nawaz. Nawaz, who was active in Hizb ut-Tahrir in the late 1990s (which culminated in a five year detention by the Egyptian government), and now works in countering extremism, has brought a lawsuit against the SPLC for defamation. If the SPLC feels comfortable putting an ex-Islamist activist on the list, one has to wonder about consistency. Where, then, is the induction of Islamist, Buddhist, nationalist, communist or more hate-mongers? Any why is Maajid Nawaz really on the list?

As is obvious, if lists such as these are going to inform payment processors' business decisions, there has to be more varied and cross-aisle input. If not, it might not be so far in the future that payment processors and vendors mirror - politically - the clients and merchants they serve. If that kind of fragmentation ever comes to head, outside of incidents of terrorism or law-breaking, it would be on right-leaning and left-leaning groups and companies (or worse, the shadow economy) to police their own hate groups. If that day ever arrives, it would be a great blemish on the face of any civil society.

When Telcos and FSPs Intersect

What Do We Want? Instant Payments!