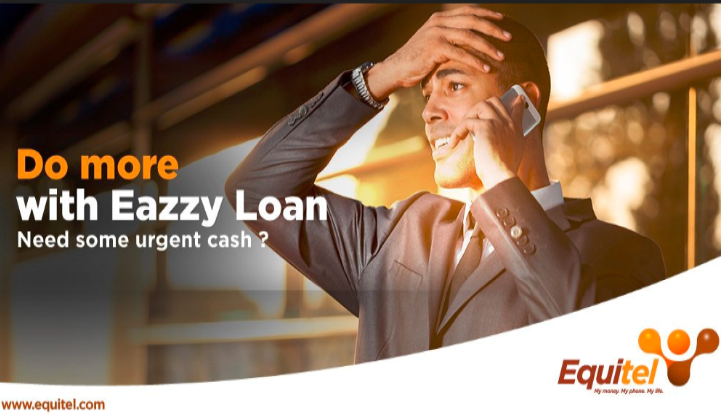 When a disruptive new technology enters the market, it’s predictable what comes next: chaos. Without prior regulations or power players controlling the field, a free-for-all ensues in which advances are made and winners and losers are had — often among companies and consumers alike.

This situation is squarely where the nascent industry of mobile money lending currently finds itself in. In its early years, the industry has shown great promise, with budding hopes that digital credit may prove a powerful tool for financial inclusion. But insiders are expressing increasing worries regarding the near total lack of regulatory oversight and almost too easy access to loans for those disproportionately lacking in financial literacy. The question becomes: will digital loans serve as a means for financial inclusion, or financial entrapment?

Introduced in the past several years in developing countries, including Bangladesh, India, Ukraine, but especially countries in East Africa, digital credit offers the opportunity for those without a traditional credit history to receive loans. What distinguishes digital credit is that it is instant and remote: an applicant can receive a loan within 24 hours — often in five minutes or less — through an automated system that determines credit worthiness and facilitates collections, all without ever visiting a physical branch.

This innovation has largely come about through the proliferation of products enabled by mobile network operators (MNOs). Applicants give lenders permission to access their mobile data, and lenders in turn analyze their mobile usage and behavior through an algorithm to create an alternative credit score that dictates what value loan the applicant may initially receive. These loans are largely small and short-term, with users able to graduate their credit score over time and increase the loan amounts available to them.

Avoiding the arduous process of a traditional loan has allowed creditors to lower their loan amounts to as low as USD$1, further expanding their reach to poorer potential borrowers. In Tanzania, leveraging non-traditional digital data and advanced analytics was found to reduce the delivery costs of loans of around USD$180 by 20 to 30 percent.

Several models have emerged to provide such services, with the roles of MNOs, banks and fintech companies protruding or receding in importance. Banks partnered with MNOs for the first mobile credit products years ago. MNO Vodacom teamed up with the Commercial Bank of Africa (CBA) in 2014 to create M-Pawa, the first successful mobile credit product in Kenya and Tanzania. CBA and Safaricom’s M-Shwari product is another leading installment in this category. The banks carry the risk of late payments and non-performing loans in exchange for the MNOs' rails which extend their reach beyond urban and wealthier communities. 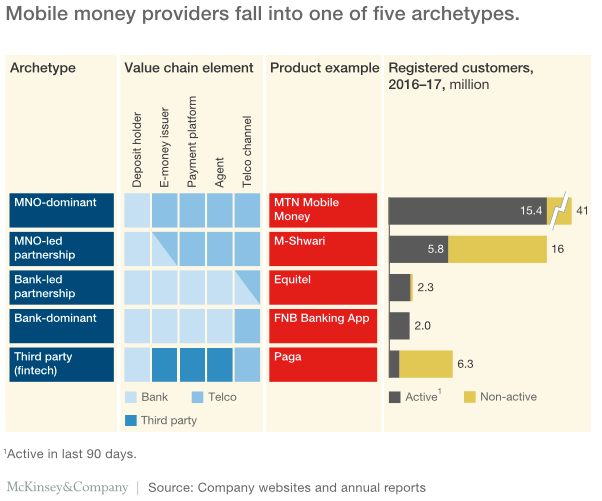 However, non-bank lenders have also partnered with MNOs to spin off their own products. Founded in 2014, JUMO is a prominent player of this nature, offering credit as an add-on to its financial services repertoire by utilizing data from mobile network operators, such as Airtel, MTN Group and Millicom, in several African countries.

Because companies like JUMO aren’t categorized as banks — JUMO is technically a non-deposit MFI, as one example — they fall outside the banking regulatory framework in countries like Kenya. This model can have several mutations, depending on how it utilizes MNO channels and if it disburses money into other general mobile money services like M-Pesa, which leading digital credit fintechs in East Africa, like Tala and Branch, do. Such companies offer loans ranging from USDU$1 to USD$10,000 in Kenya, though the vast majority of loans are less than $500 to reduce risk. While the loan amounts may be small, they quickly add up; last year, Tala founder Shivani Siryoya said the company had already disbursed digital loans worth more than USD$250 million to over a million customers in four years.

Though banks still originate the majority of loans in East Africa, the almost total lack of regulatory oversight these fintech companies exist in are increasingly giving non-banks a leg up. When the Kenyan government introduced an interest rate cap in 2016, the credit market began to shift from the tightly regulated commercial banks to MFIs and savings and credit co-operative societies (SACCOS), and then eventually to mobile-based fintech companies that operated without such constraints.

Previously hailed as a stepping stone to integrate the once financially excluded, digital credit has elicited concern from industry experts in recent months. Jason Blechman is a New York-based lawyer who has advised competition and telecom sector regulators in Africa and represented private sector clients in the industry. “The idea was they would start to repay loans, they would build up credit, and they would understand credit,” Blechman told Mondato, “but I think now there is this sense that it is first being primarily used for consumption rather than investment or starting people’s business.”

One survey by CGAP found less than 40 percent of respondents in Kenya and Tanzania were using digital credit for business needs. Many are gambling their loans away, contributing to an increase of Kenyans blacklisted from credit bureaus from 150,000 to 500,000 in three years.

In Kenya, the availability of over 50 competing lenders has also lead people to take loans from multiple companies, increasing their risk of default. CGAP consequently found 47 percent of borrowers in Kenya and 56 percent in Tanzania to have made late repayments, and 12 percent and 31 percent, respectively, having defaulted on their loans.

“The idea that this was going to be a stepping stone into financial inclusion and bigger loans, but I don’t know if there is any evidence that this is happening. Digital credit is starting to get criticism that microfinance got 5 or 6 years ago in that it pushes people into these shorter-term loans and a cycle of debt.”Jason Blechman, Advisory Lawyer

These problems regarding customer behavior are exacerbated by several product issues that are contributing to digital credit falling short of its potential.

The lack of legal obligations digital creditors have to report borrowers’ loan histories to credit bureaus is impeding borrowers’ entry into mainstream financial institutions. As Mondato recently discussed, digital lenders are increasingly spurning credit bureaus in favor of third-party tech providers, which allow them to better reach thin-file groups but sometimes constrains these borrowers’ freedom to weigh their options within the market. A local fisherman could have built up a positive credit portfolio to increase his loan limit from USD$2 to USD$200, but traditional financial institutions may have no way of knowing this if a creditor doesn’t report it.

Generally, these non-bank digital lenders have higher annualized interest rates than typical lenders to account for both the short-term, 30 days or less nature of most of these loans as well as the higher risk mobile lenders are taking on with previously unbanked customers. Stawika offers one-day loans with 1 percent interest, expanding this model to offer seven-day loans with 7 percent interest, and so on. There are also cases where borrowers, inexperienced in such realms, don’t know what exactly they are getting into or are preyed upon. Blechman described an advertisement in Nairobi that told customers they could “get a loan with interest as low as 4 percent” — failing to mention that the 4 percent rate was monthly, not annual, interest.

As Facebook’s privacy issues roil the world, experts and governments have become especially worried about the core component of digital lending: mining users’ mobile data to create alternative credit scores. Though each company has their own “secret sauce” algorithm that calculates alternative credit scores, they generally all look at people’s mobile use and activities, social media and contacts. Companies often monitor who people are calling — and whether the people they call pay their loans themselves.

Several companies monitor the content of text messages and correspond it with activity in their M-Pesa mobile money account to better determine how borrowers are spending the money. Through clients’ text messages and calls, Tala found the client’s family members, studied their communication patterns, and subsequently concluded that people who make regular calls to family are 4 percent more likely to repay their loans.

The mobile-based apps are often collecting data from customers even when they are not in the apps themselves, and keep the data even after clients stop using the app. Considering many VC-backed fintech startups aim to sell their company after 7-8 years, mobile users’ personal information may eventually become the asset of an entirely different company — a goldmine fraught with ethical issues.

With all these issues percolating as digital credit grows, efforts to regulate digital lenders has proven difficult. A digital creditor could fall under the regulatory authority of a financial regulator, a telecommunications regulator or a competition authority all within one country, resulting in a confused landscape that at times results in digital creditors not being regulated at all.

The latest efforts in Kenya to protect borrowers have come in its 2018 Financial Markets Conduct Bill, which proposes to establish a Financial Markets Conduct Authority and tighten consumer protections. But, digital lenders are not convinced that the bill, which has stalled after the governor of Kenya’s Central Bank criticized it, would really affect them, either, said Stawika CEO Kimeu. However, Kimeu did note that Stawika and other fintech-based lenders are open to regulations.

“It’s not a question of if, but when. We think it will be good for us. It signifies that we are a serious business and gives our customers the comfort of using our services.”Raphael Kimeu, CEO at Stawika

Stawika and other digital lenders in Kenya are in the advanced stages of creating a Digital Lenders Association (DLA) to represent their interests in forthcoming legislation. Before such a bill comes out, Kimeu believes the DLA will be a vehicle for lenders to self-regulate. “Even before we formalize this organization, we need to operate within certain principles. We hope to outline a code of conduct of how to operate in the market and how to perform responsible lending.”

In the meanwhile, the future of digital lenders remains murky. As a Kenyan-founded, Kenyan-based fintech company, Stawika’s greatest challenge currently is fundraising to compete with foreign-funded apps like Tala and Branch. As the market develops, Kimeu said Stawika, which has 88,000 active users, is open to cooperation with banks in the future, serving as the front end of their digital operations, or pursuing other evolutionary paths.

Regardless, the regulatory freedom that digital lenders currently enjoy is likely to come to an end in the coming years. It will be pivotal for regulators to find the sweet spot of consumer protection and space for innovation. A 2015 empirical study of successful mobile money models in 22 countries revealed that burdensome regulations and KYC requirements were the principal reasons why many mobile money models failed to “ignite” within the critical first couple years, whereas the eight countries whose mobile money schemes “ignited and grew explosively” had light regulations applied to markets that previously lacked basic financial infrastructure.

But solutions like obligatory credit reporting and comprehensive disclosure laws for all types of lenders, as well as increasing communication between digital lenders through either centralized bureaus or private “digital lenders associations,” can alleviate some of the privacy, financial inclusion and systemic risk concerns the industry is facing. As previously shown in Zambia, central banks publishing comparative interest rates can increase competition and help reduce digital lenders’ high interest rates.

If and when such regulatory fixes come, however, does not nullify what Blechman and others see as the lingering, whammy issue: consumer privacy. There is little doubt by now that these algorithms work; Kimeu claimed Stawika has found that greater amounts of data received from younger mobile users makes repayment from these sectors “certain,” for instance. But whether worried digital borrowers call the sheriff to rein in (and clean up) the excesses of the wild wild digital credit west remains a draw.

Inclusive Fintech: Series A And Beyond

Are Elections A Digital Litmus Test?