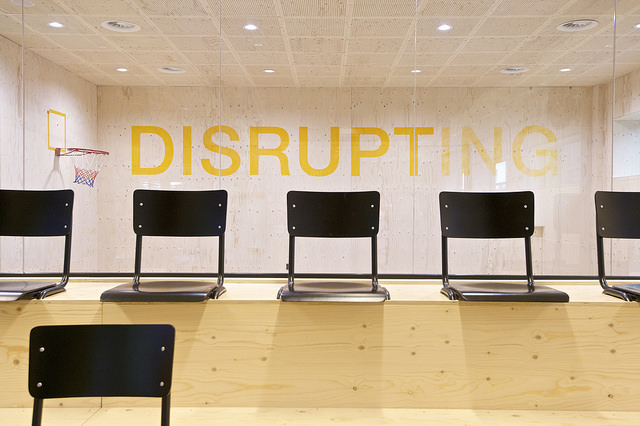 A new class of impact investment has now materialized that specifically focuses on fintech’s potential to widen financial inclusion. But, of the myriad companies that seek to become the next billion dollar unicorn - and simultaneously impact the bottom billion - very few have made it past the ‘valley of death,' between receiving external funding and generating significant revenues. This emerging class of inclusive fintech has adopted various strategies to convince investors that their idea can scale. What paths are inclusive fintechs taking to secure their first couple million in investment?

A Is For Acceleration

The story of the visionary company that blazes a trail through a fledgling industry, changing millions of lives in the process, is often wrapped up in the founder’s story of getting their first checks from early stage investors - all looking to fund the next unicorn. The venture capital firm Kleiner Perkins, for example, famously made a whopping 55,000 percent return on their USD$8 million Series A investment in Amazon, helping to create a new standard for online shopping.

While seed funding is technically the first official funding-for-equity event for a startup, the ‘valley of death’ before financial sustainability looms large; less than half of seed funded companies go on to raise Series A, typically between USD$2-15 million (though this number has increased on average due to high tech industry valuations). The companies that do, however, are in essence signaling that they are ready to play in the big leagues. Series A funding is of particularly interest to those interested in fintech in emerging markets, given the disproportionate share of venture capital funding fintech receives in these regions. 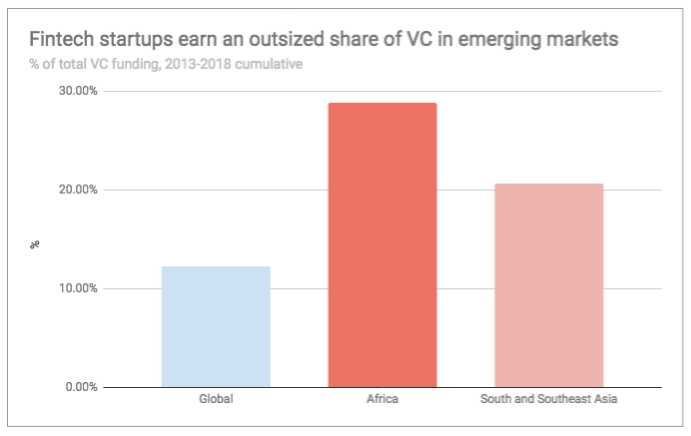 Because of the nature of the venture capital model, which only reaps a profit if the companies invested in progress to successive rounds of funding, startups gain much more than a cash injection with Series A funding - they also gain their backers’ networks and advice. All of this is, of course, in exchange for a degree of control over the company. These pressures create a single-minded focus for the company: to refine the business model and expedite scale. If they can execute on these first all-important steps, they will undergo subsequent funding rounds to continuously professionalize, massively scale up, compete with the industry giants for market share, and for some, even go public through an IPO.

In recent years, venture capital as a whole has experienced moments of self-reflection with the observation that companies that get funded often reflect a ‘mirror-tocracy’ more than a meritocracy: venture capitalists tend to fund companies with founders that look, sound and act like themselves. This makes it particularly difficult for early stage companies tackling emerging markets to get noticed, since the Western-dominated venture capital industry lacks familiarity with the unique challenges faced by African, Asian and Latin American entrepreneurs solving hard problems.

Increasing recognition of the role that fintech has in improving economic and social well-being, however, for example through credit, savings, payments and mobile money products, has created a new coalition of parties interested in nurturing the ‘inclusive fintech’ ecosystem. While definitions vary, this intersection of impact and entrepreneurship has coalesced around the opportunity to leverage advances in digital and mobile technology to produce financial solutions for base-of-the-pyramid segments, enabling private sector approaches to better serve the poor.

Unsurprisingly for a still-nascent sector, fintech startups in emerging markets can benefit enormously from incubators and accelerators that prepare them for the rigorous demands that come with taking on venture capital. Investors, similarly, prefer to bet on companies with strong support networks, and with reason; Bain research shows that median investments into companies that were first vetted by a commercial accelerator have a 20 to 30 percent higher return. And though there are thousands of tech incubators and accelerator programs around the world, only about a dozen such programs exist that specifically target early stage fintech startups developing products for low-income populations in emerging markets.

The particular fundraising advantage enjoyed by fintechs in emerging markets, as noted above, is that it is the most VC-friendly - but it is still by no means straightforward. Whereas in Silicon Valley, startups can unlock significant investments on the basis of an innovative idea - witness the boom in funding for blockchain-based technologies with little to show for product-market fit other than a white paper - startups in developing countries seeking Series A funding are typically expected to demonstrate significant revenues to receive additional capital - or at least meteoric user-adoption rates.

And because venture capitalists expect projections of total addressable markets on the order of millions of users, they look for leadership teams capable of executing a business model repeatable in multiple disparate geographies with different regulatory regimes, demographics and urbanization dynamics. 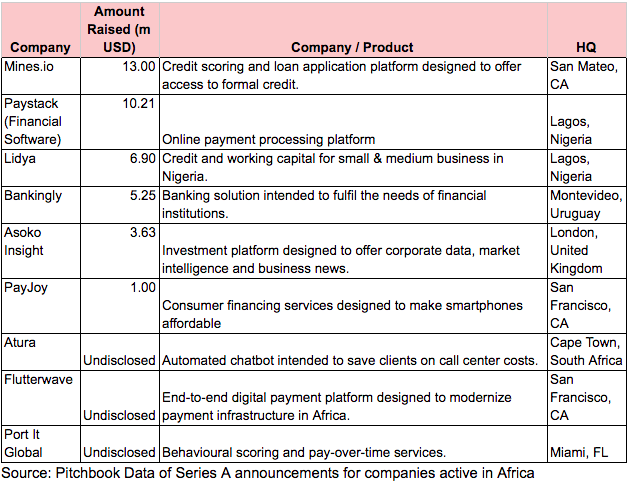 Indeed, less than a dozen companies operating in the fintech space in Africa reported raising Series A funding last year (see above) - four in the credit and lending space (social media as alternative data for credit scoring and smartphone-tied loans), two multi-channel payment providers, two Software-As-A-Service (SaaS) services targeting incumbent bank as clients, and one investment data platform. Perhaps unsurprisingly, the vast majority of Africa-centric fintechs that successfully raised Series A funding in 2018 were Western-headquartered, even though they represent less than 20 percent of those that joined an incubator or accelerator program that same year. And despite industry predictions, Insurtech remains a hard nut to crack, and even PAYGO companies have struggled to live up to the hype that facilitated an initial VC windfall. 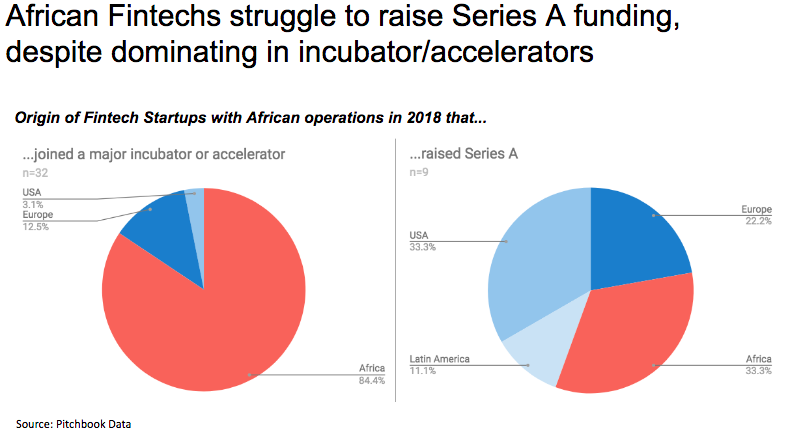 Caught between the need to prove financial viability through revenue generation and the appeal of unlocking startup capital by presenting a Silicon Valley-familiar image, entrepreneurs in emerging markets need to learn to pitch themselves one way to appeal to local investors, another to acceleration programs and impact players, and a third to international venture capitalists.

For startups eager to prove that their idea is worth an investor’s gamble, there is no lack of advice - from what principal challenges to confront to which partnerships to laser in on. What is clear is that the burgeoning accelator / incubator space can provide a critical stamp of approval which facilitates the connections to the elusive inclusive fintech Series A investor.

Where a startup has already proven it can boostrap itself to self-sustaining revenues while increasing financial inclusion, like Self Lender in the US (offering users a novel, new avenue to improve their credit score through financial activities), there may be legitimate considerations to forego this route - particularly where equity considerations are on the table. Securing anchor partnerships is another popular route to avoid the opportunity costs associated with going through an incubator - Nigeria provides particularly rich examples of startups that provide banks with technology to facilitate new client accounts through agent banking (Nigeria's equivalent to MNO agent networks, as telcos have, historically, been cut out by regulation), like Innovectives Limited and Paycentre.

Ultimately, the best thing to invest in besides a killer pitch deck for a Series A investor is undeniable excitement for your product by users, thereby demonstrating a solid product-market fit, and a leadership team with the right expertise to execute uncertain waters. And if incubators / accelerators can help startups tell this story, they may just be worth the effort, especially for entrepreneurs thirsting for fuel for their rocket ship.