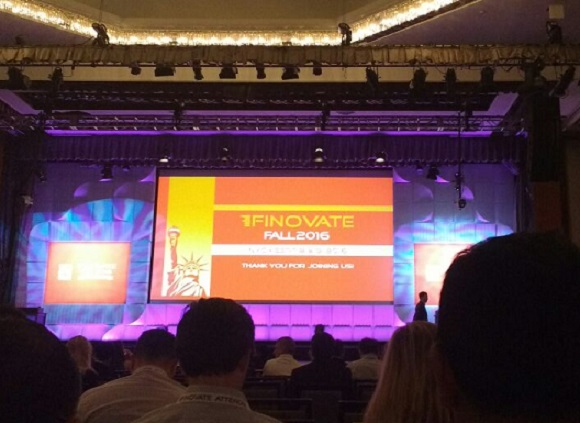 Perhaps, within the industry of financial services, analysts have been over-eager, or even cavalier, in their description of solutions as wholly disruptive. While the prophesized 'uber-moment' of banking seems to represent a creeping collective insight and group-think, the reality remains deeply nuanced. Finovate 2016 in New York reminded spectators that banks, at least for now, are not only still in vogue, but that even forward-thinking financial technology is likely to partner with these legacy institutions instead of rallying to completely supersede them. And more excitingly, technology finds itself increasingly less niched, as products in financial services develop relevancy across global markets.

Operational Costs Down, Revenue Alternatives Up

Fintech is rarely credited for its role in modernizing and digitizing the banking sector - it is more glamorous to emphasize its destabilizing forces rather than its collaborative ones. Finovate 2016 was a salient reminder that the adoption of fintech is integral to a bank's competitiveness.

Security was at the forefront of anxieties over wasted resources - and many of the exhibitors addressed that fear directly. FeatureSpace leverages adaptive behavioral analytics to identify fraud. The demo demonstrated the software's capacity to recognize an instance of phishing, even when it was the account holder, from his or her known device, who had initiated the transference of funds (under duress, of course). According to FeatureSpace's market research, the introduction of its proprietary engine had whittled down the false positive ratio from 10:1 to 3:1 with a card present, and from 23:1 to 6:1 with a card not present. For financial institutions, that often translates to approximately a 70% reduction in the denial of genuine transactions.

More accurate fraud detection naturally promotes human capital or resource allocation efficiencies, and therefore has the potential to significantly impact a bank’s bottom line. Many of the biometric firms advanced similar arguments in relation to product value. Daon, a provider of face, voice and touch ID authentication options, apprised the audience of mounting credit card fraud which could exceed by 10 billion USD by 2020. While EMV is a persuasive, and possibly, stand-alone defense when a credit card is present, biometrics are an asset in circumstances of card not present purchases. In fact, Daon positions itself as not only a solution to fraud loses, but a viable answer to the high frequency of cart abandonment – a staggering 69 percent – as biometrics can create a frictionless online or mobile payment authorization process.

Although the provision of financial services will likely continue to be a crux of the banking industry, fintech is helping to unearth a new source of revenue: data. Strands Finance offers both Personal Finance Management (PFM) and Business Finance Management (BFM) applications that strengthen engagement between banks and their patrons. According to Cesar Richardson, Vice President of Sales and Operations Americas, the intent of Strands is twofold.

"To me, banks are going to shift away from being transactional entities to repositories. Banks do not currently have a culture around monetizing data, which is where they will have to inevitably go if they want to remain profitable. To be able to collect that data, you need to have clients spend time on your channel."

Mr. Richardson contends that Strands provides the requisite tools to do so, from automatic transaction categorization to business financials administration. This, in turn, will increase customer satisfaction in regard to user experience, thereby generating a feedback effect: the more business, the more data and vice versa.

How to properly mine, manipulate, and exploit banking data was a recurrent theme. IBM Customer Insight for Banking advertised its customer segmentation capabilities and analysis at a highly granular level. MX similarly pitched itself as a leader in APIs, data acquisition, data cleansing, and data visualization. Banks are agitating to extrapolate insights from their data that translate to real growth. Firms that can capitalize on those desires and deliver tangible results will be in a better position to secure their future in the fintech market for the years to come.

Mondato Insight recently explored the relationship between Millennial consumer habits and adaptive business models in finance. The inclusion of social media-esque functionality and democratization into platforms was deemed an inevitability. The showings at Finovate 2016 certainly reinforced this point.

Fiserv featured a solution that integrates bank-secured social funding with a traditional loan. In this collaborative move, a bank shares, and thereby hedges, risk. As the bank is no longer carrying full ownership of the loan, prospective lendees are allowed more maneuverability vis-à-vis typical credit indicators. The pool of accessible customers widens for both parties, social-lenders and the bank.

In another gesture to Millennials, banks and vendors together have pursued solutions that intertwine digital communication channels with banking while still adhering to regulatory compliance. The documentation void has become somewhat of a pain point for large institutions that do not have the technological know-how to capture, archive, and report all customer interactions. This has impeded banks’ capacity to cater to the demands of their consumer base for more digital interactions with banking personnel. Qumram entered the Finovate scene this year with software that records every digital act with simple, on-demand playback, without compromising client data.

The expansion of communication strategies was omnipresent across the board. Backbase debuted its 60-seconds Onboarding, which utilizes conversation style information entry. Text entry is complemented with Optical Character Recognition which enables digital scanning of government-issued identification or credit cards from a tablet, mobile, or desktop. Facial recognition software then substitutes for in-person verification. As technology progresses, occasions that had historically compelled a visit to a brick-and-mortar branch are disappearing. Now, even the more complicated actions, such as a bank account-opening, are ripe for digitization.

Digitization and globalization appear to be two distinctively related trends. Many of the vendors boasted not only a regional clientele, but a global applicability and following.

One such vendor was the payment processor Modo. Modo operates a digital payments hub termed COIN(r) which migrates monetary value from any one payment system to any other payment system. Their demo exemplified this through the movement of value from loyalty points of a credit card to a paypal account, of which some value was then transferred to a gift card. This service may be beneficial to enterprises that intend to interact within an ecosystem across various payment mediums, but do not have the expertise to the navigate the technical complexities themselves. In a turn of events, the COIN(r) engine has discovered some utility in emerging markets, as underbanked populations often rely on Mobile Network Operators and digital wallets to transition to a cashless society. Modo has emerged as one plausible intermediary between mobile wallets and online marketplaces and is currently gaining traction in China, India, Indonesia and the Philippines.

Conversely, in an instance of reverse innovation, Juvo has remedied a problem that is ubiquitous in developing economies, though is commonly understated in more advanced states - when a pre-paid cardholder's credit runs out. Juvo has formulated instantaneous credit extensions, which promise a continuous use of phone services. The solution incorporates a data science-based identity scoring system that factors in past consumer behavior to calculate the automatic micro-loan allocation. This service is not implemented, however, at the expense of the subscriber. The logic behind Juvo is to earn the dollar a mobile network operator never would have had. Steve Polsky, Chief Executive Officer of Juvo, commented on the preferability of such a revenue structure.

"In one of Juvo's deployments with a mobile operator across multiple countries, we launched a fee-based credit extension app in one country and compared, with a similar country in terms of demographics, the revenue generated with the app that extended credit with no fees attached. We found that adoption, usage and revenue was significantly higher when credit was offered friction-free."

While servicing phones through pre-paid credit is synonymous with many of the business models in Africa, Asia, and Latin America, recent statistics suggest that North America and Europe are not immune to the phenomenon of pre-paid. 25% of North America is connected via pre-paid credit. The percentage in Europe is even higher. In fact, it is as high as 60% in the South-Eastern area of the continent. Juvo, therefore, aims to play a significant role in both consumer segments.

Technology is Neither a Panacea, Nor an Island

Today appears to be a moment of cross-pollination - whether it be fintech in regard to banks, or localized technology in regard to global initiatives. Instead of framing fintech as the antagonist, banks and mobile network operators seem to recognize the connection between adoption of vendor technology and survivability. Cynics often sneer at the lack of adaptability of legacy institutions such as banks. Is that really the case? Well, in light of the large presence of vendor pitches that targeted banks as buyers at Finovate, let's hope not.

The End of Your Flexible Friend?