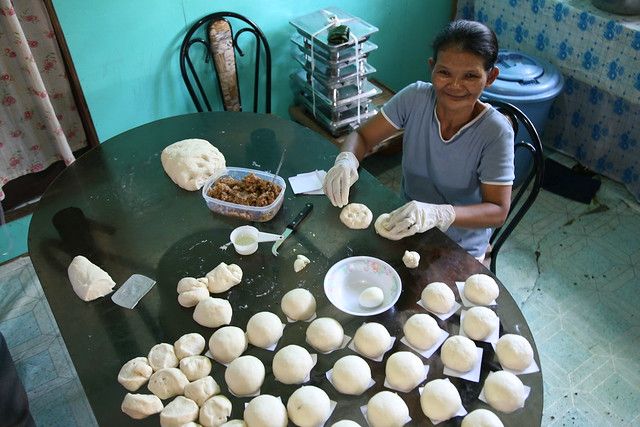 When Muhammed Yunus first crystallized the concept of microfinance in the 1970s, it was simpler times. The end-user was fairly clear cut - women, rural, poor and spurned by formal financial intermediaries - as was the product: small, unsecured loans free of guarantees. As the industry coalesced into an international phenomenon, so too did guiding principles and operational proclivities, with microfinance institutions increasingly bogged down by a branch infrastructure that is inherently difficult to replicate and scale as the target market descends further and further into the base of the economic pyramid.

These brick-and-mortar roots upon which microfinance is predicated might communicate an ossified skeleton, not an agile one. In competitive environments, microfinance institutions appear to be on the defensive. Kenya, a bastion of experimental mobile money regulation, has supervised the proliferation of digital lending, with the portfolios of 48 entrants rapidly bloating in just three years. In fact, the numbers trickling in imply a certain degree of not just end-user overlap, but cannibalization of market share by digital lenders at the expense of the microfinance institutions: loan originations by microfinance institutions tumbled by 8.9 percent from Sh47 billion in December 2016 to Sh42.8 billion in December 2017. Instead of deferring to an eventual fate of irrelevance, microfinance institutions are hatching digital strategies to resist displacement. Business-to-business (B2B) fintechs are indispensable partners in implementing this vision - a dash ironic in light of retail-facing fintechs' ongoing onslaught in the lending space.

The first course of action, of course, has to be a commitment to cultural and organizational transformation by those plotting the future trajectory of microfinance. A strategy that is wholly reactive and not anchored by performance indicators will flounder, with no compass to differentiate productive change from that roused by fear. Through a four-year longitudinal study helmed by the International Finance Corporation and Mastercard Foundation, a 'priority framework' for digitization was distilled by shadowing nine microfinance institutions in Africa. Common across the nine was a desire to leverage technology to support the following outcomes:

But even with sifting out and defining the intended results, the path forward is still complex. The in-house IT departments of microfinance institutions are small with varying levels of expertise; the budget earmarked for external software is often modest. And, the digitization of either standalone functions in the lending value chain - which could include credit scoring, management information systems, paper-based documents, payments (collections, disbursements and repayment data), roving agent networks and more - or a comprehensive suite of processes that are patched together by two, three, four software modules by a solution vendor does not always so simply match an objective. 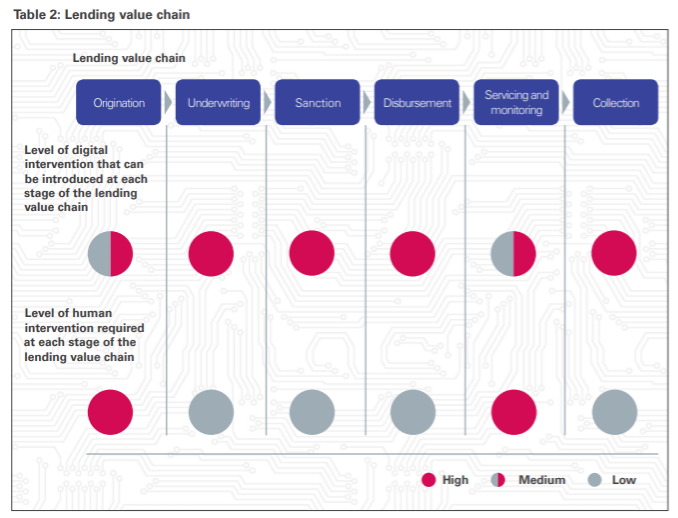 Instead, there are feedback loops, in addition to the layering of one function onto another, which muddy discerning direct cause-and-effect vis-a-vis digital strategy. All of these considerations, too, must be tempered with a watchful eye on a changing environment and evolving consumer expectations.

"Whether executed through one partnership or multiple, the key is selecting a core provider that enables simple and straightforward third party integrations, preferably through an industry standard framework such as Restful JSON APIs, to avoid being locked-in and unadaptable. While Musoni provides a large number of digital solutions in a single package, we enable integrations with third party solutions if that better accommodates the needs of the microfinance institutions. Piecemeal approaches with multiple vendors, however, do add complexity to infrastructure as well as additional license fees and integration costs, so it will also depend on the budget and experience of the in-house IT team." - Cameron Goldie-Scot, Chief Executive Officer at Musoni

It is a lot to mentally juggle, and could be overwhelming for microfinance institutions whose leadership is woefully lacking technical knowhow. But, the stakes are too high for inertia to dictate strategy and the microfinance institutions that will survive the coming incursion, whether in the form of fintech lenders or mobile money credit, are already investing in a digital future.

Proof Is In The Pudding

Business-to-business (B2B) fintechs well-acquainted with the pain points of microfinance might just be its saving grace. Cameron Goldie-Scot, prior to his founding of Musoni in 2009, was a microfinance practitioner and pioneering force in introducing mobile money payment functionality to a number of Kenyan and Tanzanian microfinance institutions. His perspective, grounded as it was in the day-to-day realities, bloomed into the Musoni System, a core-banking platform for microfinance institutions. Software Group, another B2B fintech with a bevy full of financial inclusion and microfinance veterans, has similarly developed microfinance specialized software modules like Agency, Digital Field Application (DFA) and Self-Service Banking.

These B2B offerings deviate from other banking-software-as-a-service fintechs in both price point and an emphasis on an architecture specifically designed for micro-products, delivered by increasingly wayfaring officers to clients who are seldom financially-literate. The combination of custom tailoring and localization has amounted to gains that hark back to the overarching mission of digitization.

Musoni frames the impact of its technology interventions in terms of microfinance institutions' bottom-line. In Myanmar, the migration of a microfinance institution's decentralized database onto Musoni's cloud system translated to a 80 percent reduction of paper in branches and 60 percent more data archived digitally in 30 percent of the previous baseline time. The induction of an SMS communication channel to contact and nudge borrowers in Kenya, meanwhile, quelled the ratio of the portfolio at risk by 50 percent.

While these statistics have a nice ring to them, without a relative cost-benefit analysis, it is unclear if the price tags hanging from these solutions are sustainable. So, with the help of Accion, Musoni published a case-study weighing the revenue created against the costs incurred a year out by the launch of Musoni's Digital Field Application via tablets, which were provided to all loan officers at a Kenyan microfinance institution. When the balance-sheet dust finally settled - and a USD $-97,653 was netted against a USD $+113,866 (see below) - the return on investment landed at USD $16,213, concrete proof that digitization is worth the extra effort. 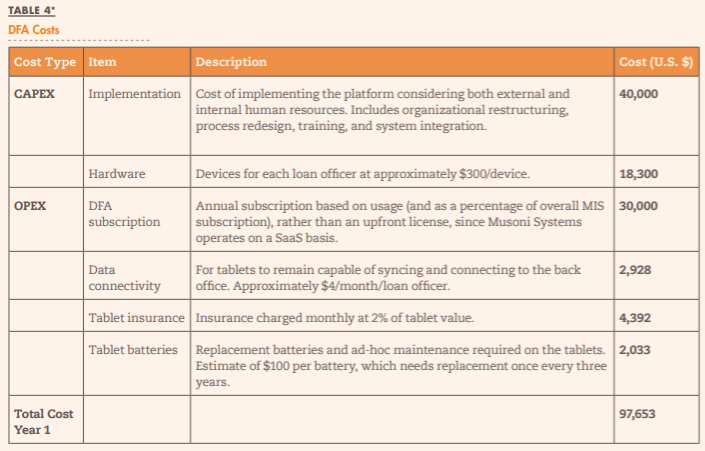 Software Group's clients have, likewise, captured similar operational efficiencies. In Cambodia, a microfinance institution leveraged Software Group's solutions to grow its customer base from 200,000 to 500,000. On another occasion, the installation of alternative digital channels multiplied the number of customer-accessible points of sale by 15 times. And yet, complacency and skittishness still characterize microfinance institutions' reception to such innovation, especially among the smaller players.

If disruptors are sniffing around microfinance's territory, should market forces not decide who emerges victorious and who is doomed to extinction? According to both Camilla Nestor, Chief Executive Officer of MIX, and Geraldine O'Keeffe, Chief Innovation Officer of Software Group, microfinance institutions have nurtured deep, congenial and social relationships with their beneficiaries that are not easily shook.

This should give pause to microfinance institutions - perhaps a digital strategy should be paired with an appraisal of products? Does the ascension of instant-approval, bite-sized credit render some products redundant? Ms. O'Keeffe believes the two might be more interrelated than the industry lets on - especially as user-cumbersome group lending dives in East Africa. The competitive advantage might lie in pouncing on data already stockpiled within the paper-plastered walls of microfinance institutions and graduating borrowers to more sophisticated credit products. To do so, though, of course requires intentional, technological upgrades. On this front, microfinance institutions should concede that they are in over their head - outsourcing digital transformation promises the financial spoils while skipping the headache.