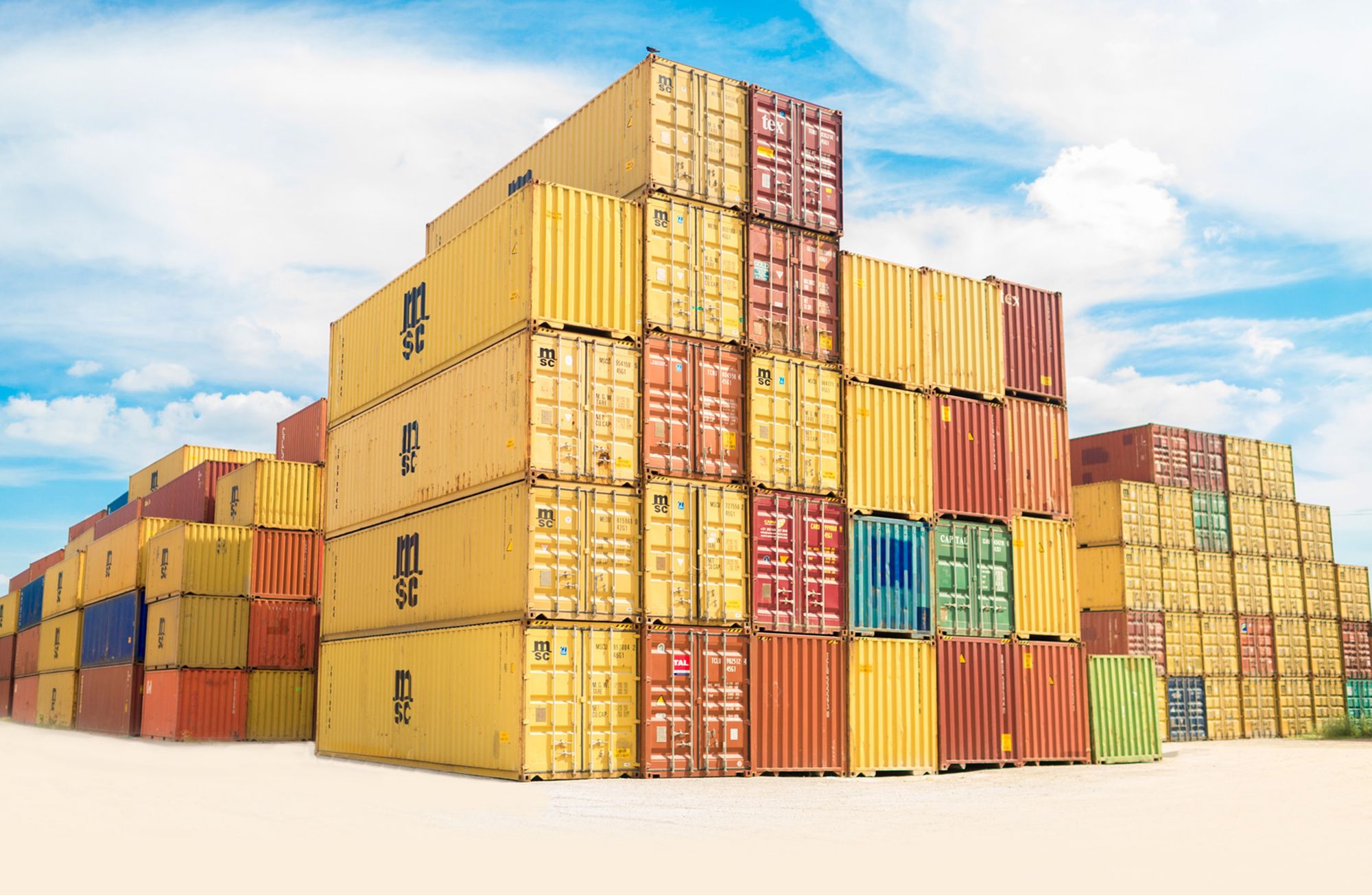 The cross-border logistics industry in Africa, currently estimated to be about $150 billion, has one key missing ingredient: financing. The trucking industry, in particular, has only a one percent penetration rate in financing — despite its cash-intensive model that often requires some form of prepayment to take care of fuel, insurance and driver logistics. The industry is filled with inefficiencies worsened by the lack of a complete view of the supply chain process for goods in transit, making it difficult for financiers to understand the industry. Despite these inefficiencies, the advent of the Africa Continental Free Trade Area Agreement creates opportunities for digitization and innovative financing mechanisms for the cross-border logistics industry. Financiers who have for years steered clear of this industry may just need to rethink their stance — and where they have only dipped their feet in, dive deeper into the pool to reap possible benefits.

The financing gap besetting the logistics industry in Africa hearkens back to the very structure of the logistics industry in the continent today. There are multiple stakeholders in any cross-border product delivery from one end to the other: the shipper, the transporter, the drivers, banks, port terminals, border officials, inspectors, and tax authorities. All of these stakeholders operate in silos, having no central point of interaction and with very limited ability to view a product's end-to-end transportation and storage. With the industry as a whole remaining largely offline, these different components each have their requirements and ways of doing business. Physical invoices, packing lists and multiple other forms of paperwork are relied upon, often also requiring physical signatures.

And unlike in more developed regions, where cargo is transported via commercial airlines, most cargo is moved by trucks across African countries. Adding to the extra time required for transportation via trucking, poor road networks lead to more delays in the transportation process. This then creates a long, tedious process that induces costs higher than what products cost themselves. Studies have shown that the cost of moving goods in Africa accounts for nearly 75% of retail prices of the goods. 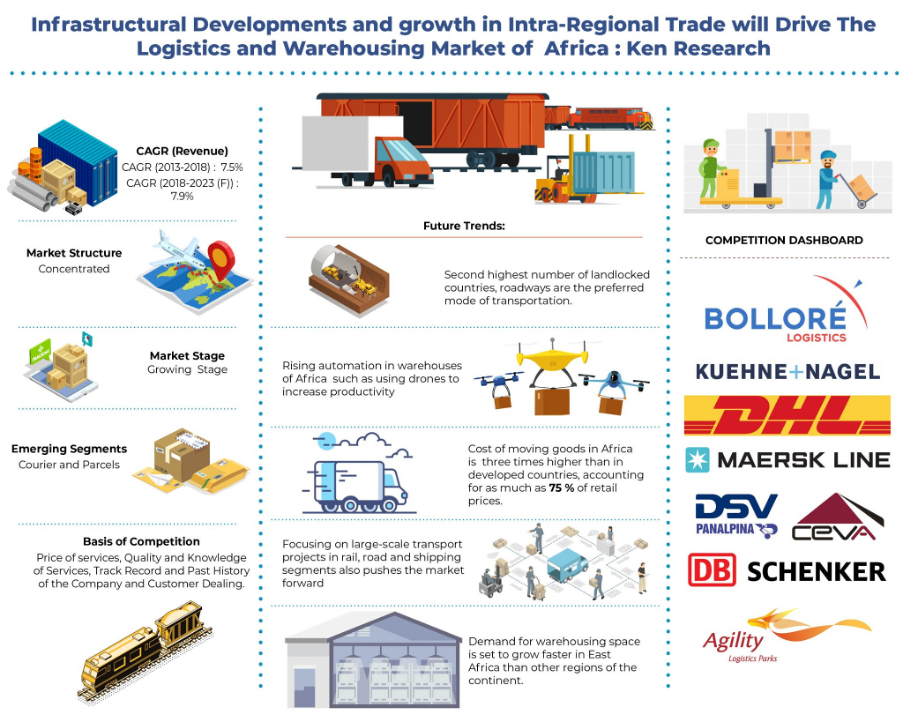 The cross-border logistics industry includes both SMEs and larger multinational companies like DHL. While data is scarce regarding the number of actors and their business size, all of the companies interviewed by Mondato Insight agree that SMEs make up the bulk of the industry’s actors. Truck owners consist of mostly SMEs who often own only one to two trucks, according to Mark Mwangi, who founded Amitruck, a company that connects transporters to cargo owners. Data from 2014 indicated that out of 838 members of the Tanzania Transport Operators Association (TATOA), 692 (83%) owned between 1 and 15 trucks, while only 146 (17%) had 16 trucks or more.

Yet the most dramatic overhaul of cross-border logistics in Africa is primed to come as a result of the Africa Continental Free Trade Area Agreement (AfCFTA). While implementation only began in 2021, the potential benefits for the logistics industry are massive, as intra-African trade is predicted to grow by 15% in 2040. With AfCFTA’s implementation set to make Africa the largest single market — consisting of up to 1.3 billion people and a combined spending power of $4 trillion — industry players expect easier movement of goods across borders through tariff reductions, standardization of the logistics industry across borders and infrastructure projects necessitated by the increased freight brought about over time.

Efforts to digitize the industry have been underway as new private sector players emerge to solve different aspects of the supply chain. Most efforts are aimed at increasing visibility of the supply chain where e-logistics startups work to bring the different parties involved online through platforms that facilitate a wider view of different processes. Players can then see where a product or shipment is in the supply chain and plan around it. Truckers, for instance, can see where there’s cargo that needs transporting while cargo owners can see when payment has been made to release the cargo to transporters. 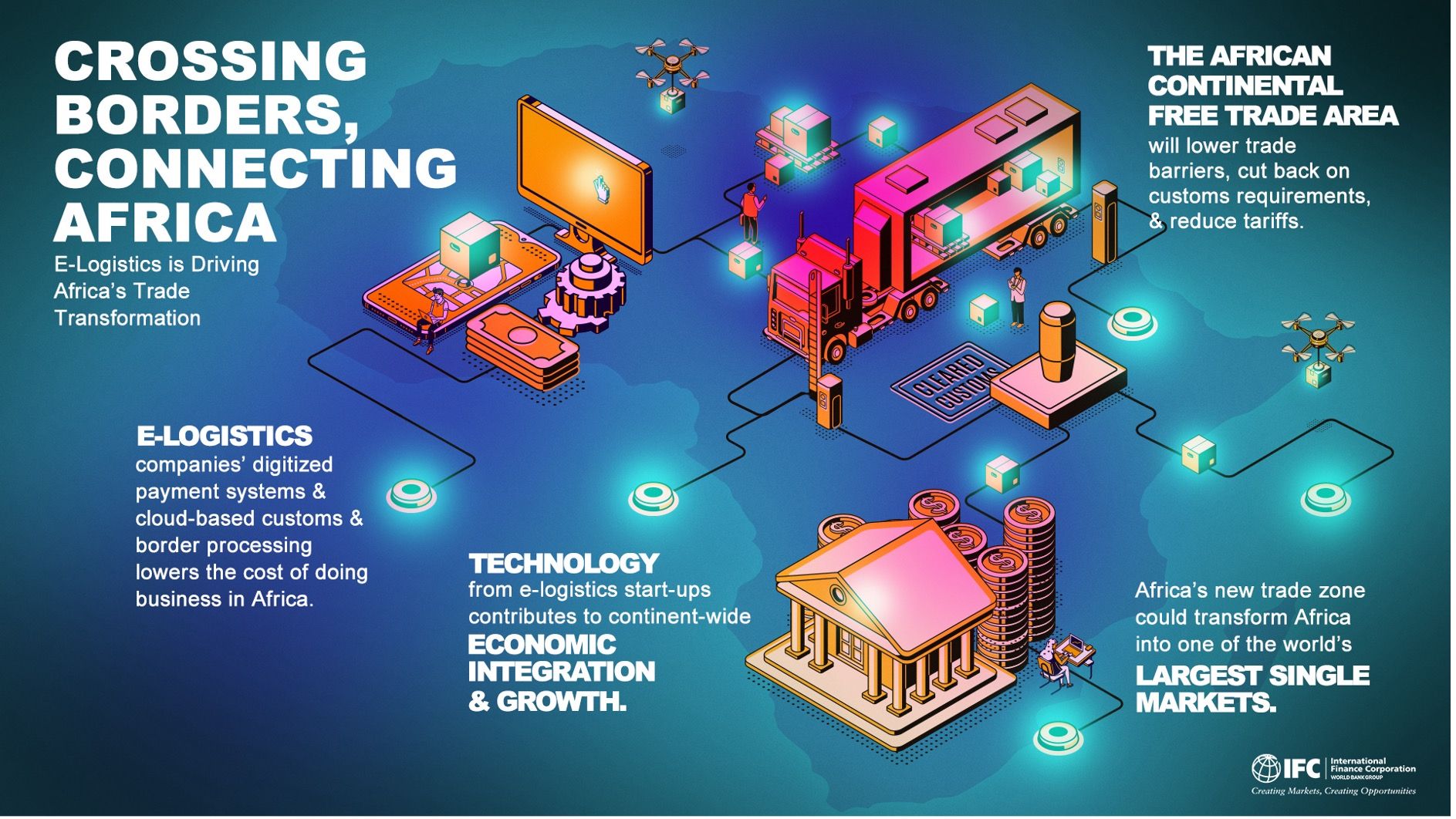 Similar to Amitruck and Kobo 360, Lori Systems connects truck owners or truck drivers to cargo owners and manufacturers, making massive strides in a few years of existence. Having launched in 2018, e-logistics company Kobo 360 has onboarded 10,800 truckers into its network across East Africa and West Africa since then.

Jetstream Africa, on the other hand, seeks to aggregate the logistics players including cargo owners, freight forwarders, truckers and customs brokers online, providing a 360-degree view of the supply chain. They have also included a digital wallet for platform users to make payments faster by topping it up to pay from there. Payment through the mobile wallet enables instant release of the cargo from cargo owner to transporter, which saves on time spent ascertaining a payment has been made before shipping is done.

Yet digitizing the logistics industry comes with its own challenges. Simply going paperless — as seen elsewhere in areas such as SACCOs — isn’t as straightforward as it would seem.

“You have to figure out a specific pain that you are solving for each individual user. We found that you can’t assume that a clerk will use your technology. They might not be interested in it, [believing] it might just be a different way of doing the job rather than an easier way.”
Jean-Claude Homawoo, Co-Founder, Lori Systems

Going digital may also be viewed as just another extra step for customers. To get around this, Jetstream's CFO Axel Ewane Lobe speaks of focusing on clear pain points. Though Jetstream provides electronic documents, they are often downloadable forms that the logistics personnel would require at checkpoints anyway. By providing these forms on their platform, they signify a significant step towards becoming a one-stop shop of filling forms, making payments and tracking a shipment from source to destination.

However, SME logistics providers — especially owners of small fleets of trucks and truck drivers — tend to be unattractive to bankers due to the risky nature of their businesses. There is bound to be any number of disruptions along the way for these players, including closed borders, bandits and driver misconduct. Their SME status also creates financial roadblocks.

“[Credit] in general on the continent is very expensive, very hard to get, and is even moreso for the players in transportation: SMEs, [who possess] not very sophisticated businesses and [are] therefore unlikely to get loans from traditional financial institutions.”
Jean-Claude Homawoo, Co-Founder, Lori Systems 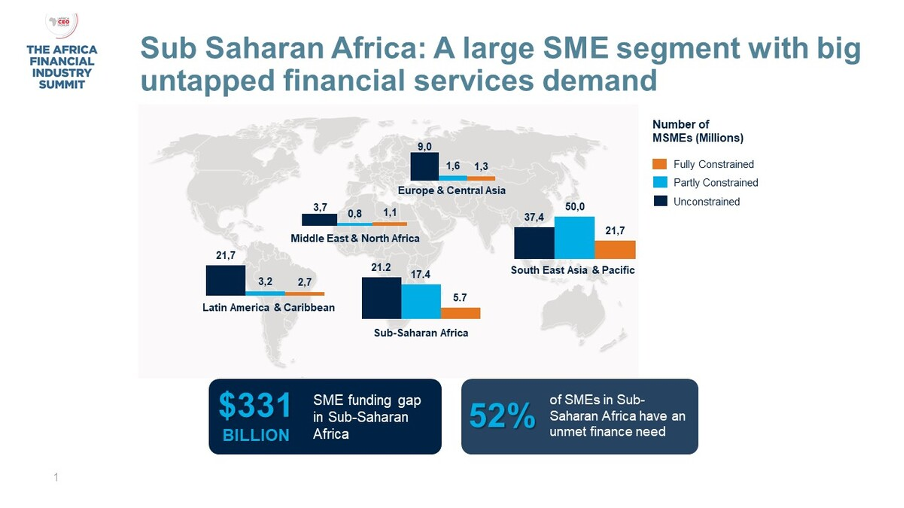 Further complicating access to financing in the industry is the lack of reliable, consistent data on the value chains. Interactions between different players and the actual cost of particular business activities are among the areas not properly documented. Trucking companies that are individually owned may not have all the necessary documents showing the number of trips done or actual revenue generated from these trips. Their accounts may also be prone to errors, especially where they may not know what to include. Homawoo gives the example of truck owners unaware of the amount of money their trucks cost them when they sit idle, unaware of the depreciation of idle trucks as a cost that is incurred. A truck driver in the East Africa space, Patrick Mwangi, notes further costs such as bribes when encountering border control personnel or police officers that are not reflected in business documentation. Without reliable data points or accurate descriptions of the resources that go into cross-border logistics, predicting credit default risks becomes a hard task for bankers and other financiers.

Nonetheless, there are some credit options available. According to Mark Mwangi, CEO of Amitruck, a Kenya-based logistics company that connects cargo owners with transporters, logistics providers in the Kenyan market can get loans to finance their trucks, whether it be to add to their fleet of trucks or even access their first trucks. Most of the trucks seen on the roads in the East African space are financed through credit facilities, he adds.

However, financing issues arise when it comes to cash flow. Consider how a truck company would need to fuel their trucks for the week to get their trucks from point A to point B, with costs reaching upwards of $2,000 in that time. Many cargo owners, including some manufacturing companies, would only pay the truck companies after 30 days, placing cashflow pressure at the front end while awaiting their pay.

The truck companies are expected as well to take on in-transit risks like bandit attacks, road accidents and delays that sometimes lead to spoiled agricultural produce. Other delays are caused by impassable roads in harsh weather conditions, economic shocks and diseases like Ebola, which often limit cross-border operations.

Despite the clear need, the hurdles to accessing finance are considerable. As Jetstream’s Ewane Lobe explains, access to capital from banks in the West Africa region takes five days or longer. Considering the time-sensitive nature of the logistics value chain, slight delays translate into penalties, which adds to the final cost of transportation. Part of Jetstream’s work involves ensuring the capital is provided to the right stakeholders in time to avoid some of these penalties. They provide working capital facilities to their platform users, allowing them to access the capital in 48 hours — which gives them enough time to make payments to third-party logistics providers and enable a faster cargo release process. This then translates into less time spent on the supply chain, allowing goods to be transported to their destination faster.

Following in the footsteps of other industries, solutions from startups like Lori Systems and Kobo 360 are focusing on providing data points for financial service providers to utilize in determining credit risk. But the adopters of these solutions are still only a fraction of the entire logistics industry. Lori’s Homawoo believes the opportunity is there for more players to work towards digitizing the cross-border logistics industry and to provide financial products tailored to the industry.

Issues in financing arise where banks may not be willing to take on the risks associated with drivers and truck owners despite having access to such data. Kobo 360 failed at its first attempt to connect financial service providers to truck companies, as the banks required that Kobo 360 assume the risk of potentially incomplete deliveries by truck companies. Kobo 360 thereafter built an insurance product that insures against driver misconduct, in-transit risks and potential credit defaulting, and they later built an embedded finance product to provide credit to logistics businesses. Lori Systems took a different route, partnering with Moove, a vehicle financing startup, to provide loans to transporters on Lori Systems’ platform, using data collected by Lori Systems. Moove’s credit scoring model — paired with Lori Systems data on the logistics industry — may prove capable of alleviating the cash flow needs of transporters, cargo owners and other players in the logistics industry, though the jury’s still out.

As efforts to digitize the logistics industry continue across the continent, the visibility of the industry and its multiple fragments increases, illuminating more gaps that require streamlining. Financing that goes beyond initial funding into more sophisticated financial products is only one ingredient needed to improve cross-border logistics — one that perhaps will be best served by more innovative companies with higher risk appetites like Moove. As e-logistics players iterate on their products and create more advanced ways to bring logistics players online and reduce their costs, digitization may cease to be a preference and turn into a necessity to survive in the industry. Though it’s taken a while to get there, the logistics industry may finally be primed to make the jump towards a digitized, well-financed future.