PayPal was, in many senses, the very first "fintech unicorn", upon whose back Elon Musk and Peter Thiel rode off to change the world in other ways. After spending over a decade as a subsidiary of eBay, the company regained operational independence in 2015, though in a very different payments space from the one in which it was bought up by eBay in 2002 for a mere US$1.5bn. Freed from its ties to eBay, PayPal has continued to post strong financials, even as it has struggled to establish a strong post-eBay identity. In 2017 it boasted almost a quarter of a billion active customer accounts, for whom the company processed some US$481bn in total payment volume, up 27% from 2016. 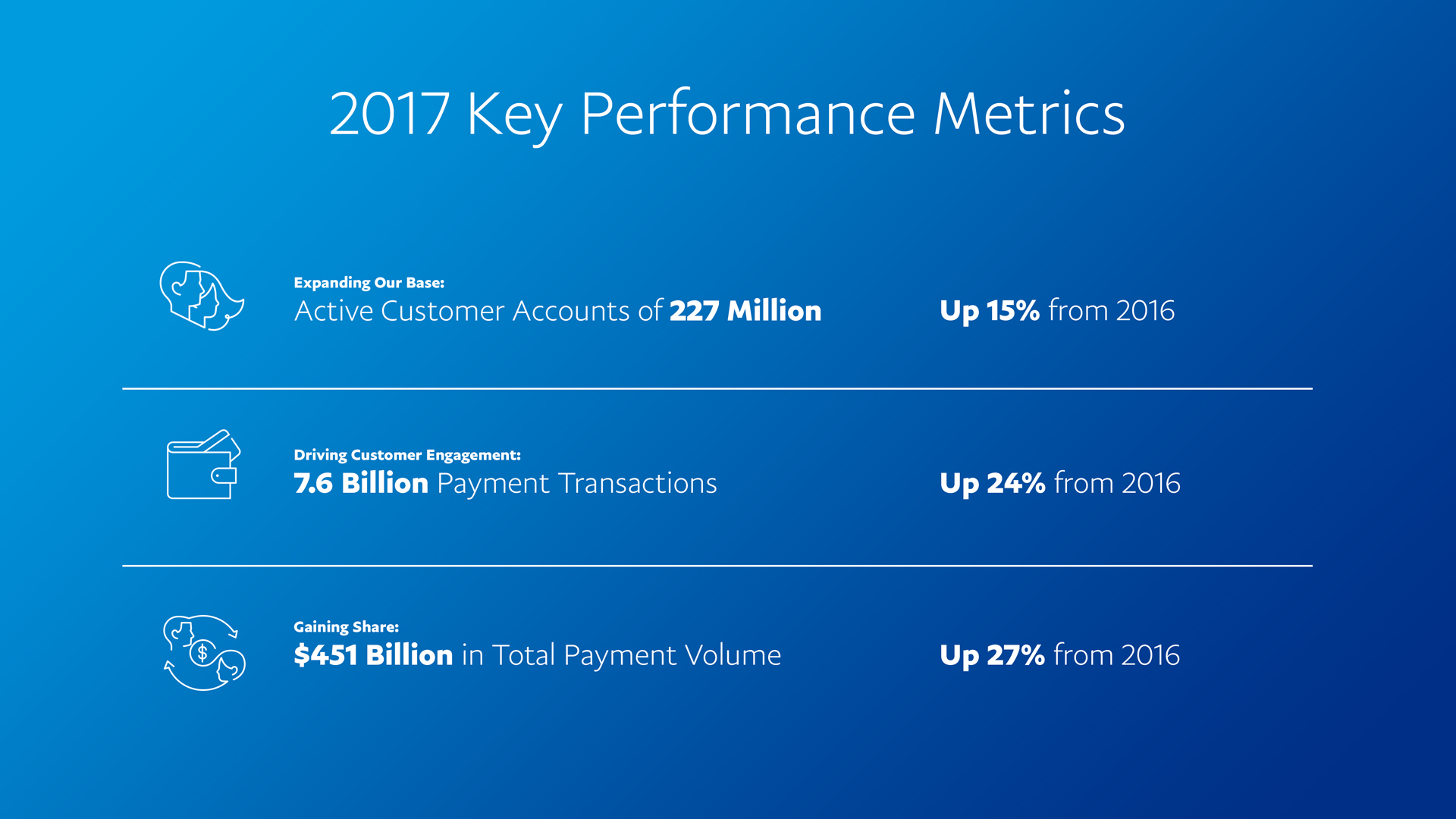 The past four years have also seen the company make a number of strategic acquisitions, which have in many ways alluded to the company's direction as the annual reports do. Since 2014 the company has bought Braintree (including Venmo), Paydiant and Xoom.

Each of these acquisitions represented an aspect of the evolution of the digital finance and commerce (DFC) space that had occurred while PayPal remained under the eBay umbrella: Braintree made the frictionless payment magic of apps such as Uber and Hotel Tonight, while Venmo was all about mobile-first P2P transactions; Paydiant offered white-label loyalty, coupon and and payment functionalities to big brand apps such as Subway who refused to surrender the payment process to X-Pays such as Apple or Google; Xoom marked a move back into money transfer and remittances. Notably, these brands have all retained their own identities, perhaps reflecting the fact that PayPal's own brand is associated with "Internet 1.0", and while considered reliable definitely lacks the "sexiness" of more recent, mobile-first iterations of DFC.

In particular, PayPal has struggled to successfully become associated with the omnichannel retail payments experience. PayPal has attempted to break the dominant use of plastic payment cards for in-store payments with little success. Attempts to have consumers use their mobile number at the checkout of brick-and-mortar retail stores in the U.S. were abandoned by the company earlier this year.

And while, yes, the Android version of the PayPal app has NFC functionality that can be used to tap-and-pay at checkouts where contactless payments are accepted, this places the PayPal app in a crowded space where it must compete with Google Pay and Samsung Pay, among other "X-Pay" apps. Without offering additional value to the customer, it is unlikely to be a field in which PayPal emerges triumphant against the handset manufacturers and OS developers.


Moreover, for as long as the app remains locked into Android and out of the iPhone, it remains associated with, for better or worse, a consumer segment whose (online) spend is lower than that of iPhone owners by a factor or 3, 4 or even 5, depending on which measurement is used.

Furthermore, the company suffered a blow earlier this year when its former parent and golden goose, eBay, dumped it in favor of another European payments startup, Adyen (last valued at around US$2.3bn, roughly what PayPal paid for iZettle). Meanwhile, Twitter founder and tech golden boy Jack Dorsey's "other company", Square, continues to go from strength to strength, after a shaky start to its 2015 IPO. It has been said that Dorsey aims for Square to become more valuable than PayPal, adding a personal element to the Silicon Valley fintech rivalry. For this reason, every story that appears to pit Square against PayPal gathers a few more column inches than the average fintech M&A piece.

Back in the heady days of late 2014, just after the launch of Apple Pay when it seemed as if DFC might have been on the cusp of explosive growth, major realignments within the payments space were seemingly everywhere: in addition to PayPal being spun back out on its own, both Apple and Google allegedly attempted to buy Square for more than US$3bn. Just a few months later it was rumored that PayPal was attempting to get in on the same act, although Square's CEO Jack Dorsey resolutely denied that serious discussions were afoot.

Whatever the truth of the matter, such an acquisition made a lot of sense from PayPal's perspective, even if Square's price tag had increased to around US$6bn after a funding round in the summer of 2014. Square's disappointing IPO and valuation of just over $4bn in the fall of 2015 (which nearly turned the company into a financial press punching bag) now sits at $22bn. Indeed, Square is very much positioned as a rival of PayPal, valued at around a quarter of the original fintech unicorn's market cap.

In this context, then, PayPal's purchase of iZettle, commonly considered "Europe's equivalent of Square", comes as no huge surprise. Priced at $2.2bn, the deal values Swedish-headquartered iZettle at around one tenth of Square, and the company recently reported revenues of 966 million Swedish crowns (approximately US$113m), up 50% over 2016. By way of comparison, Square's 2017 revenues were up 36% year-on-year to $616m. And while neither company is profitable yet, Square is closer to profitability than its Swedish counterpart, posting losses of $16m in 2017 compared to approximately $26m for iZettle.

In a somewhat bewildering turn of events, however, many industry observers have framed this acquisition as PayPal taking the battle to Square. Yet, Square and iZettle are only in direct competition in one market: the U.K., where the Swedish company has a distinct advantage. iZettle is present in 10 European markets, as well as Mexico and Brazil.

Square's business, on the other hand, is largely concentrated in the United States, although the company plans to focus in 2018 on growing its market share in its four international markets: Australia, Japan, Canada and the U.K. If, and how, Square manages to eat into iZettle's edge in Great Britain is likely to presage wider battles if (or more likely when) PayPal, which has a presence in over 200 markets, takes the brand into direct competition with Square in more markets than just the U.K.

PayPal to buy iZettle for nearly $2.2 billion from CNBC.

Indeed, it was the multinational aspect of iZettle's business that appeared to impress PayPal COO Bill Ready in comments on the CNBC network. Most of Square's business comes from its U.S. operations, although it is active in three other English-speaking markets and Japan. iZettle, on the other hand, has successfully grown its business across a dozen markets with nearly as many languages, demonstrating adaptability and a responsiveness to the needs of small businesses in a variety of local market conditions.

What I think is quite distinctive about this team is their ability to go serve small businesses on a multinational basis.
PayPal COO Bill Ready talking about iZettle on CNBC

In additional comments, Ready hinted that the quality of the iZettle team played a significant role in attracting PayPal to iZettle, and that he was looking forward to building on the Swedish company's "technical centres of excellence" in Europe, echoing comments from the company when it announced its acquisition of Chicago-based Braintree in 2014. In fact, in the wake of that purchase, it was observed that the technical knowhow that PayPal brought on board through Braintree amounted to what was, in effect, a reverse takeover. It remains to be seen whether the same can be said of the Swedes, but PayPal seems set on leveraging iZettle's dev shop in Stockholm to expand its presence in Europe on several fronts.

Take It To The Bank?

However, none of these moves into Swedish Scando-cool SME payments tech will do much to overcome PayPal's image "problem": the San Jose-based grand-daddy fintech unicorn is now a somewhat boring, if not quite legacy, incumbent that relies on M&A to keep up to date with the cool kids of fintech. Boring but reliable, unsexy but dependable, PayPal's brand in many ways feels less like that of a fintech than it does a bank. In fact, boring, reliable and dependable are all attributes that a lot of financial institutions, and their customers, crave. Perhaps the time has come for PayPal to capitalize on its brand and square the circle by going the whole hog and becoming a bank after all?