Traditionally, advertising has been the driving fuel for the production of the information we consume. But in emerging markets, particularly in Africa, advertising models have largely failed to match the scale of the demand for digital content, skipping many steps along the analog-to-digital media pathway that has characterized the media landscape in the West. This week, Mondato delves into recent trends at the intersection of DFC and digital media, and the role that mobile payment systems are playing in catalyzing the production of digital media made in Africa, for Africans’ digital lions.

The growth in data consumption on the African continent is a thing to behold. Fed by increasing access to low-cost smartphones (which has doubled in two years) and improved network reliability, mobile data continues to be the most used means through which young Africans access the internet. 60 percent of Africans with smartphones use social media as their primary source of information, eclipsing television at 25 percent and newspapers at 6 percent, according to a GeoPoll conducted with over 2,000 African Millennials. This trend represents a significant business opportunity; analysts estimates that mobile data in Africa will grow more than fourfold to more than $27bn in 2021. 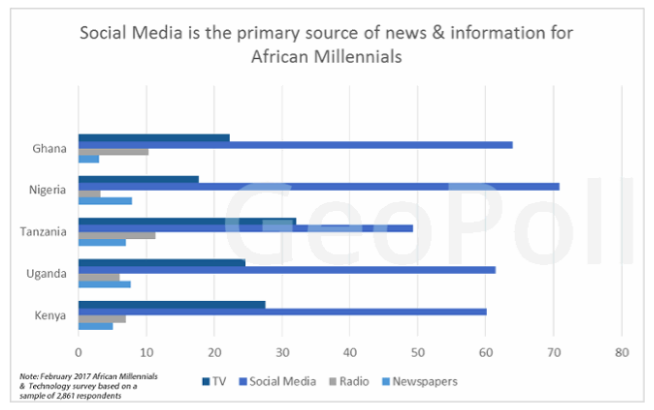 Despite social media being the first online stop for many Africans, the advertising model supporting this ecosystem is still nascent on the continent. Facebook, who - along with Google - accounted for 75 percent of all new online advertising spending in 2016, earned only 80 cents per user in Africa, less than a tenth of the 'price fetched' for the average user in North America. Challenges run the gamut from lack of effective measurement of consumer engagement to basic challenges of suppressed incomes and constrained electricity supply.

“The growth of mobile internet access via smartphone ownership, and of mobile media consumption, is yet to be fully reflected in the revenue generated by mobile advertising or consumer spend on mobile-only content,”
Vicky Myburgh‚ PricewaterhouseCoopers (PwC), in interview with African Business Magazine, November 2017

Media agencies and producers focusing on the African market have tried different strategies to monetize digital content, including meticulously building user base niches based on hyperlocal content, but the nuts and bolts challenges of ponying up for digital goods across post-colonial boundaries have proven a major obstacle to both paying for and getting paid for content, arguably more so than with physical goods for which cash-on-delivery is an option (albeit fraught with its own horror stories). Nevertheless, two successful monetization trends stand out in the evolving digital media landscape - Africans’ insatiable demand for video, and the lessons learned in the app economy from mobile games.

While 80 percent of Africans still rely on free-to-air channels to consume video programming through analog TVs, the payTV market has for some time proven that Africans are willing and able to pay for their favorite shows. In East Africa, the continent’s leading payTV market, 36 percent of Tanzanian viewers are DTT (Digital Terrestrial Television) subscribers to offerings by one of the several dominant players. Notable players include South Africa’s MultiChoice and France’s Canal+, but the influence of China’s “going out” policy is also being felt not only through the increasing ubiquity of StarTimes on the continent but the curious case of Nasper’s significant stake in Chinese super-giant Tencent.

While DTT, satellite and other hardware solutions (like dish + DVRs) will likely continue to satiate the viewing appetites of tens of millions of Africans, the sheer size of the mobile-first demographic has resulted in intense competition and innovation that may yet make payTV a Darwinian blip in Africa’s media evolution.

Video will account for 70 percent of all mobile traffic on the continent by 2021, and accordingly, more than 100 VOD players are vying to be the go-to supplier for this content. And if American leader Netflix’s recent entrance into South Africa in 2016 can be taken as any indicator, the timing is right; industry estimates for Netflix subscriptions in South Africa range from 300-400 thousand in just two years, far surpassing some analysts’ assessment of the African market’s ripeness for internet-based video.

As VOD providers iterate on their business models in the quest for killer ‘bouquets,’ it is clear that winning will require investing in local partnerships to meet and understand local demand. MultiChoice has long been known for its practice of aggressively snatching up rights to top African productions to maintain its competitive offering of local content, and iROKOtv, one of Nigeria’s first and largest online media distribution companies, has notched licensing agreements with Canal+, StarTimes, and Ericsson (among others) for their respective video offering plays targeting the continent. iROKO now has its own studio business as well - a good sign for those interested in Africans owning their own narratives end-to-end.

Leaving aside the video fray, the monetization of app-based digital content in Africa has yet to hit its stride, with one estimate claiming that less than 1 percent of apps reach profitability. This is in large part because app stores like Google Play only accept payments in a select few African countries, and exclusively through credit cards which suffer from low penetration and trust on the continent.

That said, the size and growth of the mobile gaming market in Africa makes it a space to watch, with revenues making headway towards the billion dollar mark and international gaming conferences organized by major event planners for the first time in Africa last year. 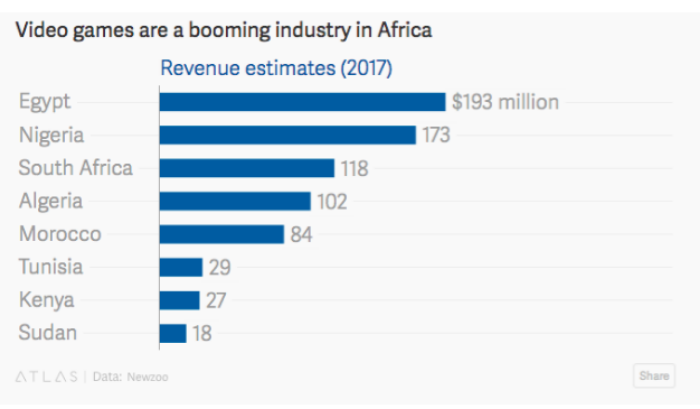 African game studies, principally based in South Africa, Nigeria, and Kenya have garnered excitement around their African-themed adventures. But, African-made video games have yet to catch anything resembling Fortnite-level furor among young gamers on the continent - likely due to the structural challenges of fragmented payment ecosystems, limited market intelligence and the infrastructural challenges noted above.

Still, if the financial inclusion successes in South East Asia provide any lessons for Africa, demand for highly addictive and socially-charged online games can act as the first carrot to coax a new generation of mobile users into setting up e-wallets, as Mondato observed with Tencent’s export-version of the world’s highest grossing multiplayer online battle arena (MOBA) game, Honor of Kings. African game developers have been experimenting with m-wallet game subscription models, leveraging the headway made by telcos in airtime monetization, a contrast to the cash-in/ cash-out agent model Tencent is betting on in its quest to dominate China’s neighboring DFC markets.

If the ‘holy grail’ for the DFC ecosystem is a frictionless way to make payments that integrates seamlessly into user’s physical and virtual experiences, then the model par excellence may indeed come from China, with the resounding success of WeChat’s in-chat payment functionalities.

Africa’s telcos have begun to take note; SafariCom recently rolled out a new chat-messaging platform called Bongo featuring integrated payment features, and Ghana has just announced an initiative to eliminate mobile money barriers across networks. More broadly, a wave of tech startups with African roots and international backers from Silicon Valley to Europe have been chipping at the interoperability challenge by developing APIs that promise to connect previously isolated payment ecosystems to global virtual currency markets, for example through PayPal.

The significance of API integrations for mobile money and e-commerce in bringing ease of payment to the social media platforms that dominate the digital era cannot be understated. Instagram just recently added native payment features for some users, testing appetite to make purchases without ever leaving its app (on the tail of revelations of similar tests by SnapChat).

Africa is poised to jump in; fintech darlings with serious backers and tech chops like FlutterWave are paving the way for payment systems across Africa to deliver this kind of native integration, accepting USSD mobile money to bank accounts and credit cards across thinly traded African currencies. This is good news not only for established companies stumped by the challenges of online sales channels, but also what the French might call “des auto-entrepreneurs” - sole business proprietors whose marketing channels are born and live exclusively on social media.

While agriculture still constitutes the majority of Africa’s GDP, the growth of service sectors (telecom and banking in particular) have proven themselves the foundations upon which stable, diversified economies are built. Increasing digital penetration through deepening and increasingly sophisticated mobile penetration will continue to foster this future by creating business models for aspiring entrepreneurs in new and maturing sectors.

One such sector is the media industry, which has recorded year-on-year double-digit growth in Nigeria, Kenya and South Africa - mainly driven by digital media. And while digital advertising (as well as traditional advertising, including, for example, billboards) will continue to play an important role in this growth, social media payment integrations may prove the real jet-fuel for the growth of Africa’s digital media ecosystem, piggy-backing on a new dimension of financial data gathered through Web 2.0 community platforms. And as transaction ecosystems cleave closer to the borderless, frictionless payment environments long-sought after by financial inclusion and DFC actors alike, social media may wind up as the field where Africans come to not only watch, learn and banter, but also hawk, buy, and trade.

For digital media, this can only be a good thing. Can we imagine an Africa where artists and producers market and sell their works directly to fans wherever they are through social media? Isaac Nemeboth, who runs a lean video production company out of Mauritius and Uganda for international clients like CNN Africa and the continent’s big banks, thinks so.

“It is a culture that needs to be learned. But with more people coming back from the diaspora, setting up production companies and shooting movies, and the increase in global appetite for African stories evidenced by Black Panther, then surely if the price is right, people will buy.” Isaac Nemeboth

Asked at which price point he’d imagine this to be, he suggests that the convenience of buying a movie through something like Facebook would easily compete with the bootlegged DVDs sold in countless markets and street corners of the continent’s cities - which should hearten content producers from Hollywood to Nollywood.

Where Next For PayPal After iZettle?