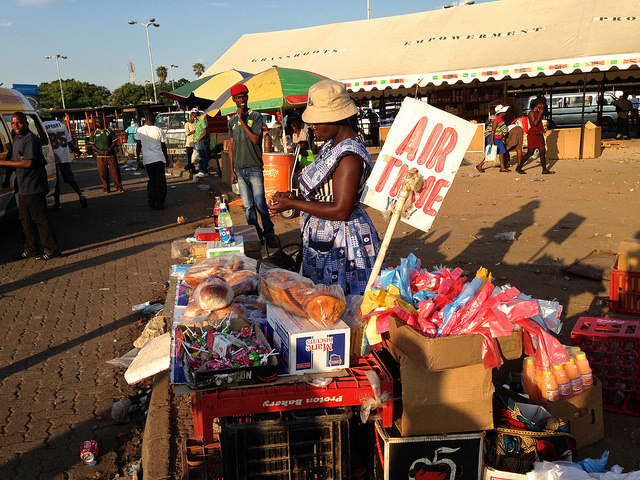 The delivery of mobile credit (at least when transported on the rails of mobile network operators) has been tidied into two product lines, airtime advance and mobile money loans. The former, or the emergency top-off of a prepaid subscriber's account in a telco-specific "currency" for voice, text or data services, is many's first introduction to the concept of digital lending. Airtime advance, then, has often been cast as a primitive prototype that gently warms prepaid customers up to a more diverse set of mobile loan products which are instead powered by mobile money, a fiat tender stored in an account tied to a mobile number.

Industry logic then regurgitates a familiar progression forward: small, general personal consumption loans will eventually graduate under-represented mobile money users to goodies like business-oriented borrowing, student debt financing or mortgages as credit profiles are simultaneously populated. But, is the actual relationship between the two tracks (airtime and mobile money) one of a stepping stone, or is airtime advance an enduring utility in and of itself? And, is there enough consumer demand to clearly define a third track - beyond modest value, use-agnostic loans?

The pre-paid airtime advance is a self-service option that allows Vodacom prepaid customers to receive airtime in advance and pay for it later. It is like the customer is getting a loan, get airtime now and pay later. The benefit of this service is that customers can stay connected and continue making calls when they are unable to recharge or buy more airtime. Vodacom.co

Nearly every mobile network operator claims an equivalent service, from MTN Xtra Time to Orange Botswana's Mpharanyetse airtime whose accompanying advertising slogan reads "because we trust you." Airtime as credit, or money for that matter (the Economist aptly dubbed airtime as the other type of mobile money back in 2013), is not a particularly edgy topic. This is especially true when considered from a MNO-centric point of implementation; it seems nearly all airtime advance solutions crafted in-house have not innovated past calculating eligibility through historical telco-usage inputs like tenure, date of last top-up or call and aggregate account balance.

It is usually through partnerships with solution vendors that more complicated methods of appraising the risk of credit are put into play. Tiaxa, among the oldest players on this circuit, debuted its nanocredit feature back in 2010 that crunched mobile operators' call detail records (CDRs) to spit out a rating and automatically extend airtime. Cignifi and First Access were also first to the CDR punch, but pitched themselves on a software-only basis, thereby passing on the risk of the microloans to the financial institution.

End-to-end airtime credit services (ACS), like Tiaxa, instead purchase airtime in bulk and re-purpose it on their own platforms as airtime advance. The choice of funding model, which includes cash payment, lent airtime with a bank guarantee and direct financing, impacts the profitability (and therefore scalability) of the enterprise.

The cost of money aside, structural elements appear to incentivize other ACSs like ComzAfrica, Simbrella and MoDe to stay in their respective, airtime lane. As airtime and mobile money are independent, bifurcated systems, unless an ACS has patented an exceptional, new approach to loan decisioning that transcends the average revenue per user (ARPU), tenure and usage CDR variable trifecta, there is little reason to technologically refashion their product in order to jump onto the mobile money track. ACSs are big fish in a small pond, whereas the bait of larger mobile money loans (and the potential profit behind them) has attracted startups specializing in predictive analytics or artificial intelligence.

The problem with siloed tracks, however, is the financial-identity data left on the table. 80 percent of the world's mobile users are prepaid subscribers, and an airtime advance is likely to be one of the first data points on their financial history map. That information slipping through the cracks is a pity at best and damaging to fledgling mobile money loan applicants at worst.

And while no one ACS provider has yet made a complete transition (Experian offers two distinct product sets: Dynamic Airtime Advantage and Mobile Money Plus), there is promise bubbling under the surface. Juvo, which has tapped into the talent and high-tech of Silicon Valley, has entered the space with the hope of connecting the dots. In the words of Juvo's Head of Data Science:

"Our bet is that once people experience the convenience of building credit for their mobile services, they’ll understand that life is actually easier if they make fewer, regular payments to a single service provider — just like we do in the United States. So far, that bet is paying off: we observe extremely high payback rates (> 95 percent), rapid adoption (50 percent regional penetration within a year), and equally progressive financial behavior (graduating to post-paid status within 6 months) across vastly different regions in the World." Aristotle Socrates, Head of Data Science at Juvo

2012 ushered in the first mobile money loans, with M-Shwari distributed through Safaricom's M-Pesa in Kenya and EcoCashLoan through Econet's Ecocash in Zimbabwe. The partnership model in these instances involved a bank (Commercial Bank of Africa and Steward Bank, respectively) who would have the accounting savvy and means to assume responsibility for the freshly cropped liabilities on their balance-sheet.

As to be expected, though, mobile money loan innovation (whether in the context of credit scoring or loan fundamentals) hasn't been fired up in the kiln of either banks or mobile network operators. Increasingly, third party startups have added in the spice of distinctive alternative data sources and the tech to allow unique loan product configuration in regard to amount, term, payment instrument and more. But even with the help of vendors who score applicants like Lenddo, or platforms who run the whole gamut of processes (differentiated as they are by product design, credit score rating strategies or loan origination tactics on their balance sheets) like Branch and Jumo, mobile money loans still run general in flavor and look suspiciously similar to each other. 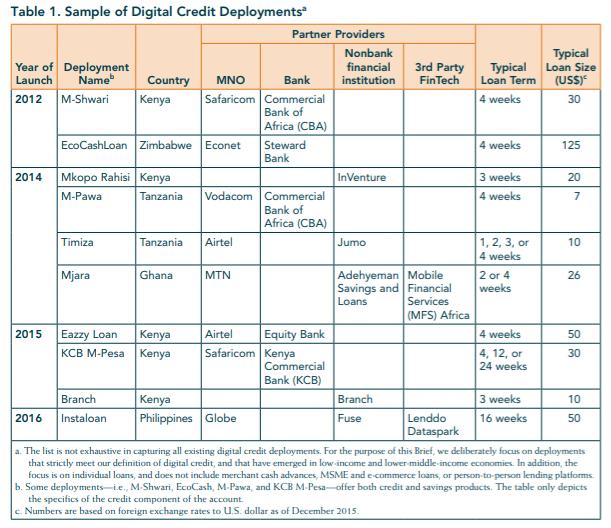 Reminiscent of the financing issue that airtime credit services bump into, balance sheet juggling may slow growth as more nimble non-bank financial institutions look to break out from the crowd or into new markets. Erin Renzas, Head of Marketing at Branch, detailed the current implications of Branch's loan portfolio, and how the approach might change as the organization scales.

"The loans are on our balance sheet. We finance our loan book via local commercial paper issuance and a USD-denominated receivables financing facility. The loan book turns over quickly and is not a drag on our balance sheet. As we scale, we may consider off-balance sheet financing arrangements to diversify our funding sources and offer a wider range of investors the opportunity to invest in Branch credit." Erin Renzas, Head of Marketing at Branch

The balance sheet math, however, hasn't braked Branch's current expansion across Kenya, Nigeria and Tanzania, where it has integrated with Safaricom's (Kenya), Tigo's (Tanzania) and Vodacom's (Tanzania) open APIs to disburse loans and collect repayments through mobile money. In fact, Branch just raised the upper limit of its loans in Kenya to 70,000 KSH (around 692 USD) which is M-Pesa's ceiling - a sign that we may be creeping ever closer to a third track.

Of course, the lack of a third track might simply reflect a market in which the business case for larger value, use-specific mobile money loans is not yet compelling. Consumer survey data released by CGAP at the beginning of this year paints a conflicted picture over the maturation of mobile credit usage in Tanzania, for instance.

Of the mobile credit readily acquired through the handful of providers (M-Pawa, Nivushe, Timiza, Branch, Tala), the most common uses are household consumption obligations or airtime. And while that, in and of itself, doesn't necessarily speak to some hidden stash of unmet financial need, of the 72 percent of users who are self-employed, 40 percent of them have put a mobile loan towards some sort of business purpose. So while the survey certainly flagged some consumer demand pot holes on route to a healthy, varied ecosystem of mobile money loan products, the direction of momentum still seems promising with things like education tuition and medical expenses getting on the board.

Consumer behavior surveys only capture one methodology, though, to testing the viability of different mobile money loan applications. Niched commercial solutions that remedy specialized borrowing pain points have found success across a number of verticals. FarmDrive, for one, sews together data from six sources (individual, social, agronomic, environmental, economic and satellite) to assess the creditworthiness of smallholder farmers, who can then access the approved funds through M-Pesa. Kopo Kopo and Zoona churn the transaction data of mobile money agents in order to tailor SME loans for liquidity, float and expansion. Good financing through mobile money loans, too, has witnessed its own boom, from M-Kopa's backing on solar panels to Cim Financial Services's funding of furniture, phones, electronics and more (telcos have also, given their inherent self-interest, inserted themselves into smartphone financing through mobile money).

It is of little surprise that four of the five venutres listed above are situated in Kenya and center around Safaricom's M-Pesa. Mobile network operators who develop open APIs that empower third-party fintechs to build upon the mobile money infrastructure are investing in gateways to more competitive and lively ecosystems. Now, whether or not those very same fintechs can secure the injections of money necessary to sustain an increasing portfolio of liabilities remains unanswered. There is a steady stream of graduation, though, as some airtime providers look to shore-up their data to facilitate a move into mobile money, and as mobile money loan technology vendors continue to toy with business models, partnerships and products.

Where Next For PayPal After iZettle?