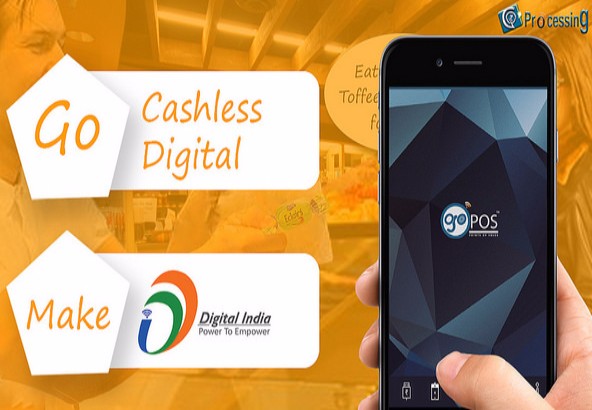 As Mondato Insight has often discussed in a variety of contexts, there are two fundamental requirements for any country or economy to make the shift from physical cash to a cashless payments ecosystem: the physical/ digital infrastructure ("rails") to operate non-cash payment systems, and a psychological readiness on the part of the populace to embrace non-cash payments.

And while some countries are further ahead on one score than the other, surprisingly few are truly ready on both fronts: in some markets the government is dragging the populace kicking and screaming towards a shiny digital future, while in others public enthusiasm and the private market are out ahead of what the government can cope, or is even comfortable, with.

In Love With King Cash?

From taxes (B2G/P2G) to social welfare benefits (G2P), governments control the levers of billions and billions of dollars flowing through economies, and thus are in a prime role to reshape a given country's payments ecosystem into digital form. And yet, it is not enough. As has been covered at length on these pages and elsewhere, for example, the government of India has attempted to engage in demonetization shock therapy as part of its attempts to create a 'digital India', tackling tax evasion and corruption in the process. And while the results of the policy continue to be debated, the prospects of paper rupees becoming a thing of the past seems about as likely as the citizens of Chennai giving up cricket in favor of baseball.

How to build a cashless society? Give people no other choice from CNBC.

And while it has not dared try something so radical as what has taken place in India, the Singaporean government is pushing hard for a digital payments revolution in the tiny island city-state, as part of its 'Smart Nation' vision. But according to numbers published recently by PayPal, 90% of Singaporeans still prefer cash as their primary payment method, followed by 74% who favor bank transfers or internet banking, and finally 61% who elect to use credit cards.

Most tellingly, however, and standing as a stark warning to digital payment enthusiasts everywhere, of the Singaporeans surveyed, only 43% reported actually using cash on a regular basis. This suggests that just as many would have rushed to cash's arms had it not been for a certain amount of coercion (such as difficulties in accessing ATMs or other sources of cash), which forced many to alternatives. Notably, the numbers actually using cash in Singapore were well below the Asian average of 57%, pointing to room for governments and merchants to nudge consumers away from their natural inclinations. While cash may remain psychologically king, Singaporeans at least seem willing to line up behind pretenders and would-be usurpers in the name of convenience if not conviction.

At the other end of the scale is China, a country in which the government is always willing and able to create an enabling regulatory environment for anything that aids and abets the mass surveillance of its citizenry. Those very same consumer-citizens, too, have rallied behind digital alternatives to cash because of the ubiquity and convenience that socialist market forces with Chinese characteristics very rapidly created. Only 25% of Chinese consumers surveyed by PayPal reported preferring to use cash on a regular basis. 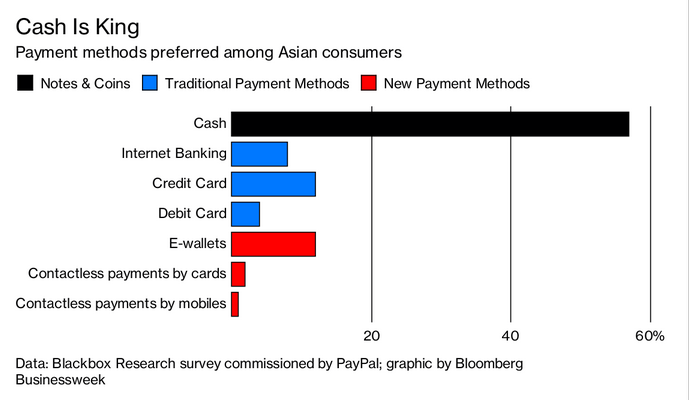 Clearly Alipay and WeChat Pay have carved out a niche for themselves in China quite unlike anything their equivalents have managed elsewhere. The fact that China's smart, young and tech-savvy booming middle class has embraced the friction-less experience fostered by the parent (Alibaba and WeChat) ecosystems - compounded by a highly competitive consumer marketplace - has lit a fire under merchants, from street food peddlers to online retailers, to maneuver to gain competitive advantage through offering alternative payment methods. It is almost impossible to comprehend the speed of this transformation: in 2009 over two-thirds of e-commerce transactions in China were paid by cash on delivery. Today over 70% and climbing of such transactions are carried out using a mobile wallet.

But in the basket of Asian countries surveyed by PayPal, only 1% gave mobile contactless payments as their preference, against the 12% who opt for e-wallets and the above mentioned 57% who cling to dough.

The fickle and patchy nature of consumer attitudes was confirmed in a recent study by RMIT University in Australia, also supported by PayPal, that found that in the APEC region, the level of economic development is not the sole determinant of e-payment readiness or adoption.

Indeed, some middle-income economies, such as Malaysia, and China, with a favorable business climate and solid infrastructure, are punching above their weight...by focusing on e-payments, an economy can boost economic growth and effectively ‘leapfrog’ in its development trajectory.APEC Fintech E-payment Readiness Index: Ecosystem Assessment and Status Report 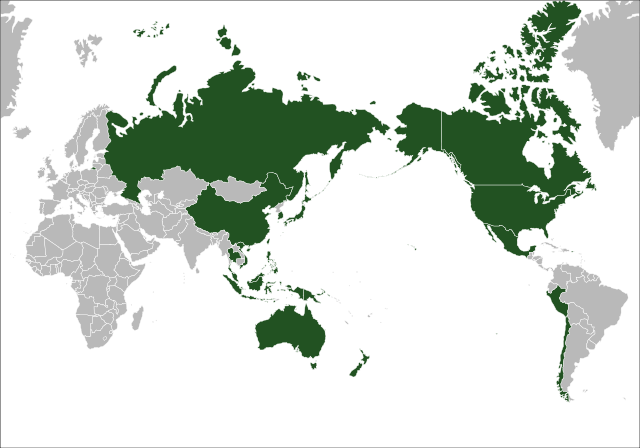 Map of the countries of APEC, by Dmthoth, Public Domain

These conclusions map neatly on top of the PayPal report noted above, which observed the existence of a consistent gap between consumer awareness and consumer usage, pointing again to the crucial interplay between infrastructure and consumer psychology. "Build it and they will come" is clearly not going to pass muster.

Unlocking the Value of Cashless

Researchers at The Fletcher School at Tufts University in the United States have undertaken a study of what they have called the "Digital Evolution Index", in order to assess which countries could benefit most from a shift to a cashless economy. In particular, they examined those countries where the cost of cash, often totally invisible to consumers, was highest, and overlaid that data with information about which of these countries have the digital infrastructure in place that would make for the most cost-effective and painless transition. The result is what the authors have christened "cashless sweet spots". 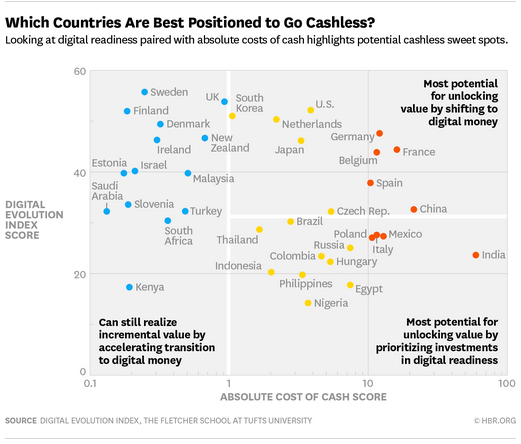 The Countries That Would Profit Most from a Cashless World

Notably, cash costs a lot in India, but the government may be jumping the gun in its attempts to shove the country into a cashless future when investment in digital infrastructure is clearly needed first. Conversely, as discussed on these pages a few months ago, Germany stands ready to unlock large amounts of value through a shift to digital money, but its citizenry harbors deeply entrenched suspicion of the state, values privacy and loves its cold, hard currency.

The United States, it seems, is grappling with similar levels of public antipathy towards a cashless future. Research commissioned by Glory, a developer of "cash technology solutions" showed an instinctive tendency to prefer cash among US, UK and Australian consumers that mirrored the numbers that PayPal found in Asia. Some 87% of American consumers want to retain the option to pay in cash, even if they don't necessarily call upon it. Cash also remains the most trusted means of payment, with 55% picking it over cards and 61% choosing it over mobile payments. Only 1 in 3 consumers reported a decline in the amount of cash they used when compared to the previous year.

You Can Lead a Horse to Water...

And while companies such as Glory have a vested interest in making cash work better rather than seeing it replaced, the parallels between the company's findings in US-UK-Australia and PayPal's research in Asia indicate it cannot be easily dismissed. Cash continues to exert a strong psychological and emotional pull over people in many countries. What is remarkable, though, is the basket of cashless misfits who appear to have broken free of the lure and luster of silver libras: Sweden, China, Kenya, South Korea, Somaliland and Singapore share nothing in common other than an unusual propensity towards making digital payments, and a hard-nosed lack of sentimentality over coinage.

So, while institutions such as Citi and Imperial College London analyze digital money readiness, and organizations such as the Better Than Cash Alliance provide diagnostic tools to help policymakers take stock and plan for helping their economies' transition from cash to digital, much of the evidence points towards a key underlying factor being that great unknown, and maybe even unknowable, element: culture. And while polling is helping us scratch the surface when sussing out the cashless readiness of various economies, perhaps we need to devote some more resources towards working out what are, precisely, and within their specific cultural contexts, the mental obstacles that cause some peoples to stick to cash, before we make massive investments in digital infrastructure that only have limited impact. Are nudges away from cash more effective than huge pull investments into digital? After all, you can lead a horse to water, but you can't make it drink.