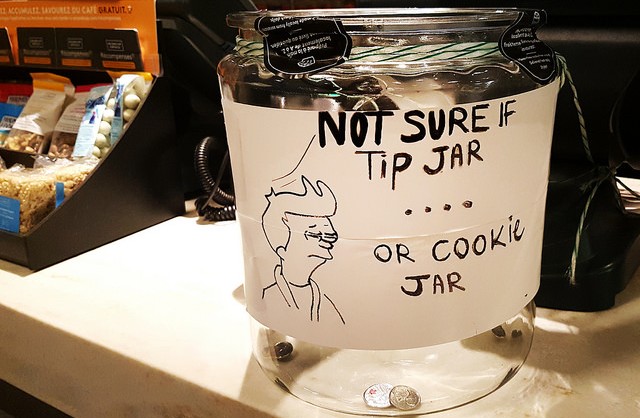 One of the fundamental purposes of money, whether it is physical cash or digital payments, is to settle debts. Whether it is for the purchase of a soda in a drugstore, the payment of a salary, or settling the tab after a group dinner, as a general rule when money passes from A to B, somebody owes somebody else something. It may not necessarily be a debt of money, but as a general rule some sort of debt is being settled. After all, it still remains generally true that you don't get something for nothing.

But there still remains a part of most people's lives (and in the U.S. a significant chunk of the economy) that involves voluntary donations, whether to charities, buskers, panhandlers or as gratuities to people working in the service industries. Giving to charity can bring with it significant tax advantages, so consequently Americans give almost US$400bn per year to charities, including religious organizations. But the exact size of the other forms of gratis contribution, whether a gift, donation or a tip, are difficult to know (and for the converse reason why charitable donations are so well documented: the (non-)payment of tax).

Nevertheless, the global parking industry is worth over US$100bn, while the U.S. hospitality industry clocks up over 1.1 billion night-stays per year. Between all those valets and bellhops, not to mention the buskers and manicurists and pizza delivery guys and gals, there are a lot of dollar bills flying around as tips. Most are gratefully stuffed into pockets and quite how much the taxman ever becomes aware of is anyone's guess (though one report put it as high as 40%, or some US$11bn.)

Tips to bartenders and servers are not really applicable in this context, as they are added to the bill if paying by card. Even here though, the digitization of payments is changing the dynamics of tipping, and tilting them in favor of service providers. "Guilt tipping" is the new phenomenon of consumers being faced by a digital screen asking what amount of tip they want to add to a transaction that was formerly tip-free.

Fingers point squarely at Square for introducing, or at minimum spreading, "tip creep", via their consumer-facing POS terminals. But the idea was not Square's: NYC taxi drivers had the blow of compulsory card acceptance softened by the default tip options being set at 20%, 25% or 30%. Other amounts are available to the rider, but in the words of Tom Cruise in Jerry Maguire, "You do the math." And very often, we don't, to the driver's benefit. So for merchants and service providers who take card payments, digitization is pushing up revenues and incomes. But what about those who don't? 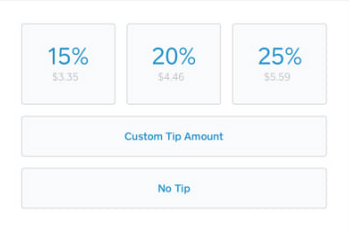 A Square POS. Translation: "How terrible a person are you?"

How To Tip A Shark

When it works, tipping in cash works well, especially for the recipient, who leaves behind much less of a paper trail for their tax returns. But like the dog that didn't bark in Sherlock Holmes, of even more interest to Digital Finance and Commerce aficionados are the tips that aren't paid: all the occasions when a customer or guest wants to give a gratuity, but can't, either because they don't have any cash, or because they don't have the right cash (e.g. only possessing higher denomination notes or when traveling holding the wrong currency). Most of us have been there, and experienced the awkwardness that accompanies the vain fumbling in pockets or a purse, followed by a hurried apology, "Sorry, I've no cash."

In fact, consumer research seen by Mondato Insight suggests that this is a problem experienced at least once a month by over 40% of Americans, meaning that would-be tip recipients are missing out on large sums of money, with suggestions that workers in some service sectors could be missing out on more than half their potential tips. Clearly there is a problem here that DFC has the potential to address.

And yet, despite the apparent scale of the problem, few of us, even in the DFC space, could name a solution or startup that is successfully tackling the challenge. Many have entered the space only to retreat in defeat, while others barely made it past the stage of setting up a website: Thanks!, Tip-Bit, Mipayway and Global Tipping, among others, have all attempted to crack the nut and failed. Tipping Circle, TipGenie, Gratuu and Tipsta are all live apps, but appear to have minimal traction.

The exception to this is one of the first startups to attempt to take gratuities digital, Phoenix, Arizona-based Bravo, which has been around since 2014, and recently featured on ABC's TV show 'Shark Tank', where they were successful in attracting the interest (and capital) of two of the sharks.

"I'll Get You Next Time"

A major part of the problem that Bravo and its competitors face is inherent in the problem they are trying to solve: the (theoretically) voluntary nature of a gratuity and the fleeting (even if awkward) nature of the interaction between the customer and the service provider create only a very limited incentive for the giver to take remedial action to prevent the situation reoccurring. In other words, embarrassment < hassle.

This is a very different dynamic from when a consumer has, for example, got their phone with them but has forgotten their wallet and can't buy the soda they went into the store for. In this instance both parties lose out through the lack of an alternative payment medium, but when it comes to tipping, other than a slight loss of face for the prospective giver, they don't lose much at all if they are caught cashless.

Bravo has attempted to overcome this problem by initially targeting environments where the interaction is longer and where the would-be tip recipients have a more enduring relationship with the prospective tippers. In particular, the company focused much of its efforts on the live music scene, an environment in which the interaction between the two parties is longer-lasting, and where the performers have the opportunity to act as evangelists and encourage their cashless fans to adopt a cashless method of showing their appreciation. And once onboarded, of course, the consumer is equipped to tip digitally whomever is registered on the system, whether barista, nail technicial or bellhop.


This approach has helped cement relationships with both static music venues and, somewhat importantly, touring musicians and artists who took the "prosperity gospel" of Bravo with them as they traveled between venues or even toured between states.

And while such digital donations may have tax implications that an anonymous few bucks thrown into a hat would not, cashless tipping platforms present the opportunity to create an ongoing relationship (if both parties are willing) between the tip giver and recipient. This sort of data, knowing who are their "superfans", is potentially invaluable to artists, and well worth foregoing some income tax on small tips. And for tip givers, turning the normal anonymity of cash tips on its head creates the opportunity to interact directly via a digital platform with artists they respect. And, crucially, your favorite banjo player is more likely to respond to a message from a stranger if it as accompanied by $5!

In conversation with Mondato Insight, Bravo's Co-Founder and CEO, Maria Luna, pointed towards the loyalty and repeat use that Bravo users demonstrated in comparison to its competitors as being a key to the organic growth that the largely bootstrapped startup experienced on its path to its first 100k active users. The hope is that with the increased visibility and inflow of capital that followed the Shark Tank broadcast, the company will be able to launch a much more aggressive marketing and onboarding campaign in 10 focus cities to try and gain the sort of adoption and usage traction that is going to drive the company to profitability.

And therein lies the rub for any startup attempting to tackle this space: how to scale to profitability when bringing money onto the platform via card network payment rails can cost anything up to the industry standard of 2.9% + 30¢ per transaction. Bravo is betting that the answer is to be found on the blockchain. Bravo CEO, Ms. Luna, was keen to stress her belief that this was not just another blockchain bandwagon. Unlike, say, the Long Island Ice Tea Company, a blockchain token/ coin such as Bravo is launching will function as tokens/ coins are meant to: as a medium of exchange of value. Moreover, the company is not dependent upon an ICO to create a new business model. Rather, it is claimed, the blockchain simply presents an improved (with faster transaction times and lower costs) iteration of a business model that already exists.

It seems likely that many cynics will raise at least one eyebrow at yet another seeming "blockchain as panacea" story. However, even if it almost seems old-fashioned, cryptocoins as a medium of exchange in a market (even if one-sided) seems theoretically sound, even if just at a very high level. And given the sluggish or non-existent growth of other would-be players in this space, perhaps it is going to take a paradigm shift before King Cash is dethroned when it comes to doling out tips. In the meantime, however, it's still probably best to always keep a few singles in your wallet or purse, just so you never get caught short the next time you need them. For now, that's our top tip.

Are The Mechanics Behind Medicine Markets Mangled?