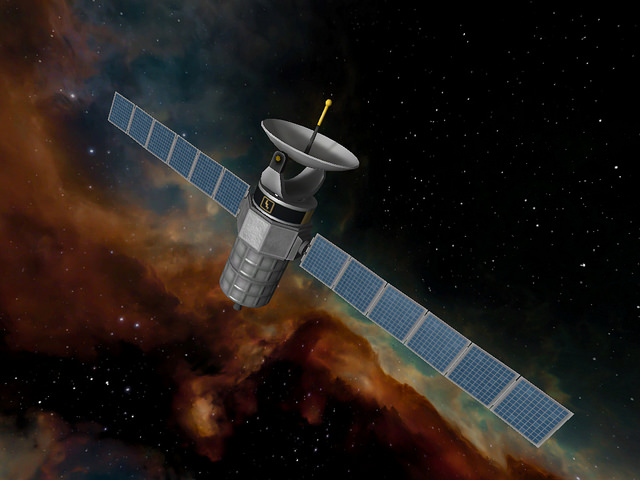 From the moment the French balloonist Nadar took aerial photographs of Paris in the mid 19th century, serving as inspiration for Jules Verne’s novel “From the Earth to the Moon,” the possibilities of remote sensing have quite literally taken off. From the use of biplanes to target trenches in WWI to Cold War spy satellites, military purposes have incrementally pushed us forward, but innovation in space-tech has fortunately not been exclusively adversarial, as the digital revolution that has grown hand-in-hand with the satellite ecosystem attests. But at a time when luxury travel to the ‘final frontier’ appears but a few iPhone releases away, what does innovation in space mean for DFC players on the ground? This week, we look at how space-tech can help get at those hard-to-reach spots in emerging markets. (A hint: navigating the “last-mile” is easier with Street View).

First, some context; there are some 1,500 functional satellites currently in orbit (and at least twice as many defunct ones floating around). Roughly a third of functional satellites focus primarily on commercial communications, with a fifth devoted to earth observation, constituting a market value crossing 260 billion dollars last year. The dizzying array of critical functions our satellite ecosystem plays for businesses, governments, and research encompasses the ubiquitous to the niche, enabling everything from GPS for the masses to secure data transfer for businesses, climate and weather research, and of course, media. 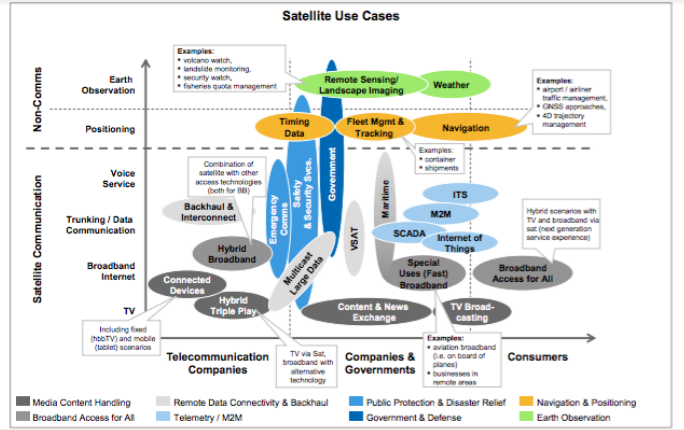 Booz and Co, Why Satellites Matter, 2012

While the industries involved in launching and operating satellites include scores of technical fields most haven’t even heard of (bathymetry?), two basic trends are driving the development of use-cases that are making waves for business models targeting DFC customers in emerging markets. These can be described as innovations in the ‘hardware’ of space tech and the ‘software’ of machine learning.

GAFA In The Sky With Diamonds

Mondato has previously written about the over-sized role of video in driving demand for data. Incidentally, this trend is mirrored in space, where beaming TV shows accounted for 77% of the satellite industry’s revenues in 2017 - with most growth coming from MENA and Sub Saharan Africa. Yet the recent entrants to the fray that have given the industry new energy look nothing like the historical incumbents: while less than a decade ago, just five companies operated the vast majority of satellites (Intelset, SES, Eutelsat, InmarSat, and Telesat), the GAFAs (Google, Apple, Facebook, and Amazon) of today are as likely to make the industry go gaga.

Indeed, much of the kudos have gone to new players like SpaceX by demonstrating the successful landing and re-use of lift-off rockets commercially in 2015, while Amazon’s Blue Origin followed suit the same year with its New Shephard “space vehicle.” Google’s money is on the ‘smallsat’ movement, which has seen the development and launch of hundreds of hand to refrigerator-sized, (relatively) cheap satellites leveraging the emerging pervasiveness of commercial off-the-shelf electronics suitable for space-use.

These new breed of satellites are equipped with ever-more sophisticated sensors and transmitters operating on wider and different wavelengths - allowing for greater flexibility in imaging and communications. Is there a need to penetrate clouds, vegetation or even different kinds of soil? There’s a spectrum for that. Or, what about images of anywhere in the world - updated daily? Early IFC-investee Planet’s fleet of ‘Doves’ now cover every inch of the globe, something even Uncle Sam can’t do yet.

The application of machine learning (ML) to Earth Observation (EO) readings has birthed a plethora of business models leveraging the power of artificial intelligence to crunch data from above. Innovations in deep learning and neural networks have in the past several years begun to outperform human capabilities in chess, Jeopardy and finally image recognition - with the added benefit of being much faster. Learning to classify features from images or spectral data (thermal, infrared, microwave, LIDAR etc) makes it possible to extract landscape features and pair them with other datasets. The result: an explosion of EO+ML startups orbiting about in the satellite industry.

The surprising convergence of space-tech and the sharing economy has also changed the accessibility and usability of data. Although in the past accessing EO data meant exorbitant licensing fees and significant technical expertise, the cottage satellite+ ecosystem is now better positioned to identify valuable use-cases and propose bird’s-eye-view solutions, often new to targeted industries. 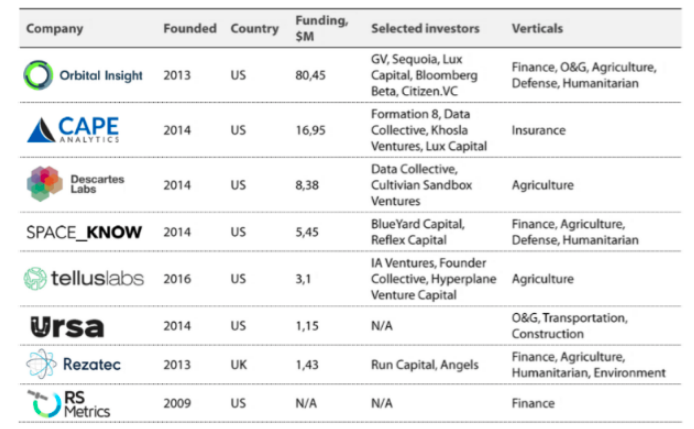 The development and social impact sector is particularly poised to benefit from the satellite shake-up and innovations in remote sensing, earth observation and machine learning. Geospatial data has been used for humanitarian crises for a long-time - after eight years of internal advocacy, USAID created the GeoCenter in 2011 which, in addition to its technical work on long-term development issues, was able to provide full-service support to disaster relief efforts in poorly documented areas, notably during the Ebola crisis in West Africa and Nepal’s 2015 earthquake. Beyond emergency situations, combining datasets with statistical analysis allows resilience planners to visualize critical relationships between variables like shocks to health, agriculture, food prices, natural disasters, age, gender, ethnicity and education levels of households.

At a more fundamental level, anyone who has worked in developing countries has likely developed a healthy skepticism when it comes to the data; garbage in, garbage out, as they say. 57 countries have zero or only one poverty estimates for the 2002 - 2011 period, and the quality of the data is compromised by the pain-staking, expensive and lengthy methodologies of nationally-managed household surveys.

This is where machine learning can be a game-changer, says Jonathan Hersh, a researcher at the intersection of satellite image-based machine learning and socioeconomic analysis. Night-time brightness has already been shown to provide accurate proxies for GDP - but that’s old news by now. Correlating extracted features like roof types or proximity to infrastructure (already used as a qualitative method in surveys on the ground) from high resolution day-time maps has been demonstrated to predict socio-economic indicators such as wealth with ground-breaking accuracy and granularity - at a fraction of the time and cost.

“The platforms that now let you process images on the cloud allow for enormous efficiency gains - allowing us to process about two million square kilometers of high resolution images in the time it used to take us to process four thousand square kilometers.”
Jonathan Hersh, Chapman University and World Bank author

The implications of having neighborhood-by-neighborhood demographic profiles, rather than regional or even national averages, should have development practitioners asking themselves what they might discover if they look under the hood of the data driving their resource allocation profiles. Given that spatial analysis, combined with anonymized cell phone data, can accurately predict the number of people in a given theme park, ‘off-the-shelf’ national average data now seem … below average.

For DFC actors, the value proposition is clearly FYC: find your customer, and follow your customer. The ability to identify, for example, communities currently or about to experience a disproportionately high ratio of wealth to mobile money penetration (for e.g. thanks to favorable agricultural yield/ price analysis) can inform business decisions of where mobile money agents should be deployed - at scale, just in time, and most importantly, ahead of the competition. These techniques, of course, may not completely replace the qualitative survey methods currently used to gain market insights or gauge financial inclusion, but they will certainly add a strong complement. After all, quality, granular socio-economic data is another way of saying customer segmentation.

Alt Data from Above

Keeping pace with innovation is a full-time job, however, and not all organizations have the time or resources to change or integrate new data streams. That’s why some firms at the intersection of RS and business insights adopt a ‘push’ approach, proactively submitting geospatial add-on components to RFP submissions that may not be explicitly asking for it. “Once they try it, they love it,” says Doug Park, Principal Consultant at Environmental Resources Management, referencing clients in extractive industries and international lenders.

“Lenders are always looking for good ways to monitor investments. To be compliant, they might want to know that a palm oil plantation investment won’t encroach on protected forest resources, or that a local community hasn’t sprouted up on proposed sites in recent years. Innovations in satellite imaging have made it possible to think about offsetting these costs up-front for these players, who can now even monitor operations in near-real-time.” Doug Park, Principal Consultant at Environmental Resources Management

It won’t be long for these capabilities to converge across other sectors key to growth in emerging markets. Connecting built-environment extracted features with real estate insurance markets has already netted California-based Cape Analytics with over 31m USD in funding; might we expect similar investments for promising applications in tackling rural titling as well as urban residential tax challenges across Africa?

The golden egg, for many in emerging markets, is of course in agriculture. Mondato has previously covered the challenges of digital agricultural insurance markets. While uptake remains a sticking point from an inclusion perspective, the march of technological progress in space continues to seek killer value propositions on the ground, as improved resolution capabilities and analysis can now pair climatic trends with ever-finer readings, recommendations and products for plots large and small.

In the US, these techniques have gone head to head with USDA forecasts, with significant financial implications for those with commodity positions. Similar satellite-based investment-grade products can leaven ‘thin-file’ business decisions, from predicting economic activity based on warehouse activity visible from space to evaluating a businesses’ regular customer base for creditworthiness - with mobility and behavior change insights on mobile money usage only beginning to emerge.

The impact of satellite industry innovations in cost and accessibility, paired with advances in machine learning and big data integration, indeed holds enormous potential to inform decisions previously made in data deserts, and we are only on the cusp of seeing how DFC actors will be served. It is perhaps important to note that for all the shiny new things in space, a lot of the value for the sector has been made possible by what amounts to a sort of ‘data charity’ in which legacy datasets are increasingly made public.

After all, so much of the opportunity created by EO+ML has hinged on the successive release of proprietary content generated at fantastic up-front capital expenditures as open-data. Mobile operators should take note - where infrastructure is already paid for, the practice of releasing anonymized call data for public research and analysis could prove the accelerant for bringing the full benefits of space-tech innovations to the DFC ecosystem - and unlocking significant value where it’s needed most.

As a general rule of thumb, however, we should not necessarily become accustomed to massive disruption in satellites and space-tech. Rocket launches are not app launches; hardware is harder. And yet, analysts observing latency and cost improvements from low orbit satellites are even beginning to bet that innovation from above will deliver on the holy grail in digital access: universal broadband internet access. The industry itself seems to recognize that their future revenues are online as well, commanding the lion’s share of the estimated revenue in just two decades’ time:

Can humanity’s insatiable demand for connectedness - and, if current trends hold, mobile-first video in particular - put enough satellites in space to warrant this kind of wide-spread infrastructural shift? Only time will tell. In the meantime, complementary pieces of the internet of everything puzzle are coming into picture, with machine learning progressing towards generalized AI and the drone economy buzzing on. Even balloons are floating back into the fray, with X’s Loon Project (Google) recently announcing its first non-emergency project, targeting a step-change in connectivity access in Kenya. Jules Verne’s Frenchman would certainly be proud.