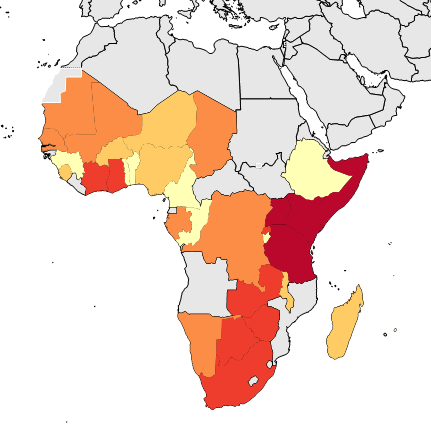 Last week the World Bank released the second wave of its ‘Global Findex‘: the results of a global survey that measures financial inclusion levels in a number of countries right across the world. This was the first update to the original 2011 Findex, so the results were highly anticipated by those interested in the impact that different models of mobile money are having on access to financial services in developing economies.

The headline figures were pretty impressive: by the World Bank’s estimates, between 2011 and 2014 some 700 million adults worldwide gained access to financial services, which represented a 20 percent drop in the numbers of unbanked people. The downside is recognition of the scale of the problem that remains: there are still over two billion adults who do not have an account and find themselves financially excluded. And while mobile money has played an extremely important role in reducing levels of financial exclusion, it remains a niche product.

It is likely that we will hear much about this African quintet of countries where mobile wallets are more prevalent than bank accounts (this is something of a corrective to the 2014 GSMA *State of the Industry *report, which, using IMF Financial Access Survey data, put that figure at 16 countries). With so much attention being paid to mobile money, it is perhaps understandable that we occasionally overlook the strides towards greater financial inclusion being made in other areas, particularly the role of traditional financial institutions. But the absence of mobile money’s juggernaut – Kenya – reminds us that while a good soundbite, this statistic actually tells us very little, other than that these countries had very high levels of financial exclusion to begin with. It doesn’t tell us much about what has happened in the interim, and we may need to remind ourselves that, for many people, having an account at a formal financial institution and having a mobile money account may amount to the same thing, or at least involve the same F.I.

The examples of Kenya and Tanzania, two neighboring countries whose mobile money markets are very different yet both very buoyant (see here for a direct comparison), serve to illustrate this point. Even three years ago Kenya had almost double the SSA average percentage of adults with a bank account: 42% versus 24%. And while that latter number has grown across the region to 29% in 2014, Kenya has similarly powered ahead, and now stands as one of only four countries on the entire African continent in which more than half the population (55%) has an account at a formal financial institution (the others being Algeria, South Africa and Namibia; Botswana comes very close, with over 49%). Tanzania, by way of contrast, has actually gone backwards relative to the regional average, in terms of numbers of accounts at a formal financial institution: 17.3% of Tanzanians had an account in 2011, and this has crept up slightly in the intervening period to 19%. And while it is impressive that almost one out of every three Tanzanian adults has a mobile money account, the country still lags some considerable distance behind Kenya, where it is estimated that 58% of those aged 15+ have a mobile money account.

As Mondato Insight previously observed, as a region West Africa continues to lag significantly behind East Africa in levels of mobile money account ownership, with a mere six percent of adults having a mobile money account, compared to over 20% in East Africa. However, this has to be set against a background in which West Africans are more than twice as likely as East Africans to have an account at a formal institution. It should be noted, however, that any regional generalizations are going to be heavily distorted by the 100 million Nigerians, whose banking habits are going to tilt the sub-regional averages for West Africa.

Indeed, Nigeria is an interesting example of what can be done in terms of financial inclusion without mobile playing a significant role: barely 2% of Nigerians have a mobile wallet, and yet 44% now have an account at an F.I. This represents a 15 percentage point increase on 2011, though it does not greatly exceed the average increase of 13 percentage points for lower middle income countries (of which Nigeria is one) over the same period. Ghana, on the other hand (whose quixotic regulatory environment for mobile money Mondato Insight paid some attention to a few weeks ago) has only seen a 5 percentage point increase in F.I. account ownership, rising to 35%. Conversely, though, despite the regulatory difficulties, 13% of Ghanaians now have a mobile money account – the same level as in Mali. Neighboring both these countries is West Africa’s regional mobile money hotspot, Cote d’Ivoire, where almost one in four adults has a mobile money account, and one in three an account at an F.I.

In Southern Africa, Zimbabwe, on the other hand, tells a story that is almost diametrically opposed to that of Nigeria. Zimbabweans have abandoned banks at a truly startling rate: in 2011 almost 2 out of 5 adults in Zimbabwe reported having a bank account – a figure that was almost double the average for a low income country, and 65% higher than the SSA average. That number has now dropped to 17%, below even the average levels for the region and its national income bracket. While mobile money has stepped in to fill in some of this gap, the combined numbers with mobile or FI accounts is still below the number of bank accounts three years ago, meaning, almost uniquely, that financial exclusion has worsened in Zimbabwe in the intervening three years rather than improved, reflecting the economic turbulence that country continues to endure.

Not The Only Game in Town

There remains a great deal of data to be parsed and analyzed in the coming weeks and months. What this first glance reveals, however, is that even in the financial inclusion and mobile money space, it is easy to fall into the trap of talking about “Africa”, when regional and national differences are so large as to leave the word devoid of any explanatory value. And while “mobile” clearly holds huge potential for the entire continent, its effects are being felt very differently, even in neighboring countries. Moreover, these numbers also serve as a gentle reminder that mobile money is not the only game in town.

Do Banks Have a Brick-and-Mortar Future?