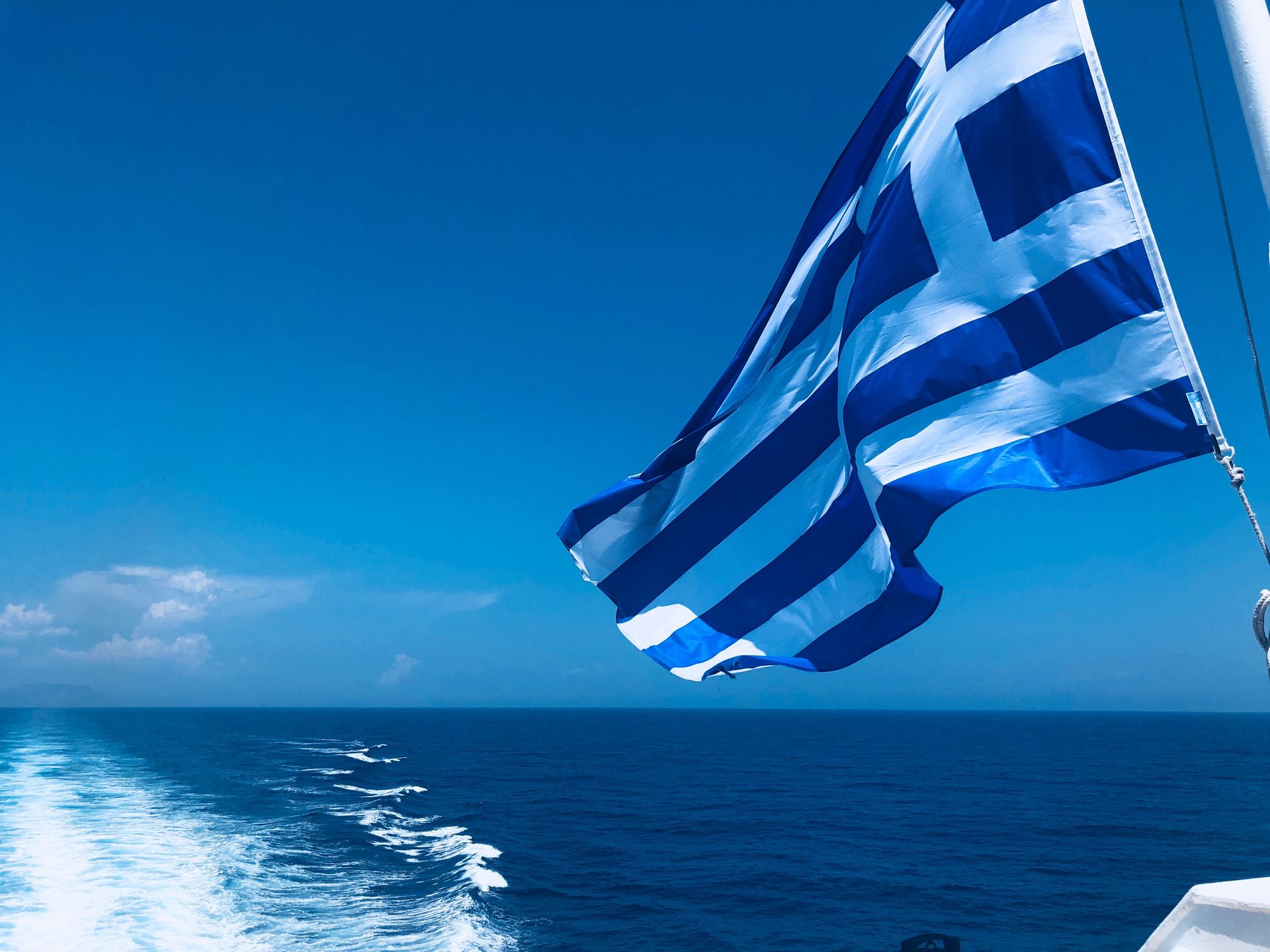 Greece has yet to recover from its economic crisis wrought in late 2009, with profound implications on the development of its digital financial services ecosystem. Though the Greek economy shrank further during the pandemic, its unique position as a cheaper tourist destination under the auspices of the European Union compels Greece’s government to keep up with financial innovation — or risk failing standards set by the E.U. and expected by its wealthy visitors. In this sense, Greece offers a fascinating case study of a country grappling with both the potential benefits and competition inherent to operating in advanced markets and frameworks while only just getting off the ground itself.

Greece’s EU membership brings vast benefits when it comes to financial support programs and initiatives for economic growth. However, according to the DESI 2020 index of the EU, Greece ranked 27th in all 28 member states regarding digital performance; in 2021, it ranked 25th.

The E.U.'s regulatory framework doesn’t prioritize innovation like the U.S., with the Union’s rules heavily concerned with regulation and the complex coordination required among its nations. While this ensures fair practice, it hasn’t necessarily favored tech laggards like Greece. The Digital Markets Act, however, is seen as crucial legislation to provide market opportunities for newcomers in the EU market, and Greek lawyer and fintech expert Andreas Papakonstantinou cites two regulatory proposals as essential to developing Greece’s cryptocurrency market: a DLT pilot program to develop the marketability and clearing of tokenized securities, and the proposal for MiCA (Markets in Crypto-assets) regulation to oversee encrypted securities, which remain a regulatory gray area.

Yet even before a potential lurch towards crypto relevancy, Greece has fallen behind its E.U. peers in basic efforts to digitize. Greece experiences marked inequality in Internet use among E.U. countries, as one in four Greek women did not use the Internet in 2019, compared to the rest of Europe, where one in ten women had not used the Internet. In a country with stubbornly high unemployment, the perceived risk of automation has also led to skepticism among much of the Greek population towards digitization efforts.

Yet as is elsewhere, COVID-19 tossed such cultural inhibitors aside, transforming risks into opportunities for all. The lockdowns prompted the adoption of digital solutions both at a state and individual level. The digital maturity of the public sector largely improved with the establishment of the governmental platform gov.gr, which now provides more than 500 kinds of e-services. Greece’s later participation in fintech solutions has helped integrate more modern systems, offering advantages in terms of cost and efficiency.

Despite the pandemic’s drive towards digitization, the digital divide among generations, geographical regions and socio-economic groups still looms large in Greece’s digital immaturity, however. Reduced competitiveness and productivity combine with strong idiosyncratic cultural factors, such as anti-reformist values and defensive attitudes toward innovation, to limit the capacity of the Greek e-economy’s growth. With Greece’s history of economic hardships and IMF interventions, investors perceive a “cultural risk,” which steers the flow of private sector money away from Greece and towards economically more stable European peers.

The Move Towards Open Banking

By providing greater options and financial transparency, open banking and open finance are viewed as a panacea to the trust issues that have long riddled Greece’s DFS sector. Following E.U. directives, Greek legislation had to incorporate PSD2. Under this legal framework, banks and other payment services must provide clear information about rates and charges, offer a consistent service, and protect customers across Europe, with the aim being to introduce new players to the market and create a competitive landscape. The need to comply has pressured Greece to catch up to fellow EU countries regarding developing its domestic ecosystem and going cashless.

The National Bank of Greece (NBG) was the first bank to engage in a large-scale transformation, leveraging new technologies to become the country’s financial services leader in innovation — and to considerable acclaim. Holding the top position in Greece’s banking ecosystem with 2.5 million active digital banking users, NBG’s offerings include fully digital onboarding for clients and digital loans. The success of NBG has spurred other Greek banks to pursue digitization as well — and the possibilities of open banking in particular.

“The country’s financial framework still has serious shortcomings, both due to the inaction of large financial institutions, as well as due to the rigid legal framework that does not favor innovation in financial instruments from start-ups. However, the advent of open banking has had a significant impact on digital banking, both legally and technologically.”
Antonis Prentzas, Co-Founder and CEO, Finloup

Although Greek borrowing has often led the country to seemingly irreversible traps, the EU’s funding to develop Greece’s digital financial sector has been essential in providing liquidity and forming growth initiatives. The Greek startup scene received a significant boost with the establishment of EquiFund, a fund-of-funds program formed by a public-private partnership between the Greek government and the European Investment Fund (EIF). The partnership aims to boost entrepreneurship through a capital investment of more than 400 million euros into the Greek market. EquiFund spurred the initiation of Greek venture capital firms, and EquiFund-supported VCs have now made 150 investments in Greek startups. 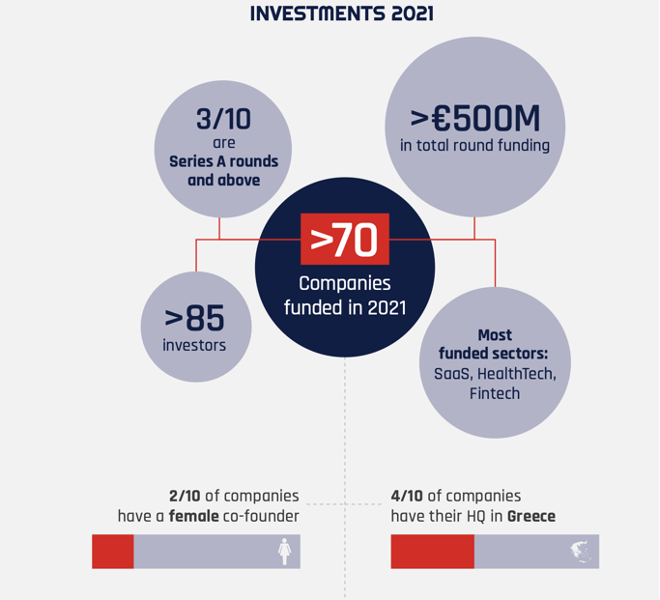 Simultaneously, the Greek government has taken concerted efforts to digitize the economy. To encourage measured risk-taking in the entrepreneurial spirit, the Greek Ministry of Development and Investments established in 2020 the National Registry of Startups, along with the platform Elevate Greece, for the mapping and promotion of Greek startups under a single portal. The ministry further designed new legislation to entice investors, who can claim up to 50% of their capital contributions to start-ups as tax-deductible.

According to Papakonstantinou, the registry’s support has brought significant changes, such as allowing companies to offer stock options to executives and employees — which naturally encourages participation in kickstarting Greece’s tech ecosystem. Greece's first tech unicorn, Viva Wallet, began offering stock options this year as part of Viva Wallet’s partnership with J.P. Morgan. Yet Viva Wallet’s particular success in the Greek setting can be attributed mostly to its tech savviness. Offering technology-driven payment solutions and owning a banking license, the company’s innovative character attracted significant funding early on, which allowed it to further invest in the development of its digital services. In 2020, Viva Wallet completed its €75 million Series C fundraising to grow into a neobank with a major European footprint. In early 2022, J.P. Morgan acquired Viva Wallet with an ownership stake of 49%, consistent with the firm’s plan to expand deeper into the European market.

Viva Wallet’s success is tied to its entry into fast-growing markets through neobanking. While Greek fintech’s largest segment is digital payments with a total transaction value of $8.7 billion in 2022, the neo-banking segment is projected to experience revenue growth of 45.3% in 2023. Neo-banking’s impressive growth potential stems from the lack of existing players, combined with the need in Greece for faster funding processes under low-cost structures. Hence, the new financial institutions created are predominantly digital, fostering a positive space for growth of the fintech sector. 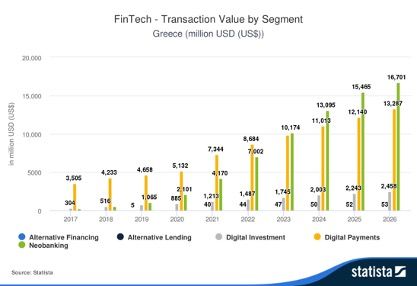 Such developments have also helped other companies in the digital space. Natech, for instance, sells financial software solutions in Greece and Europe. The growth of the neobanking sector has enabled startups like Finloup, a BNPL provider, to emerge as supporting third-party providers. Though Greece may be late to the BNPL game, such forays are early evidence that Greece’s open banking system — accelerated forward the E.U.'s PSD2 — is helping the country’s financial market mature through transparency and expanded options. Slowly, the synergies of a viable ecosystem are coming into place in the Greek digital finance space, in which European, governmental and private entities collaborate and benefit from one another.

In the effort to support the country’s financial ecosystem, Greek companies prioritize collaboration and support locally, but this can only go so far considering the limited breadth of Greek fintechs at this juncture. Constantinos Nikolaidis, a senior analyst at VC firm Velocity.Partners, describes how efforts to invest in tech startups with some Greek element results mostly in investments of foreign companies with a Greek founder or co-founder. The small number of technological investment opportunities remaining solely within Greece is related to the low trust in government structures and the belief that growth opportunities are much greater internationally.

Along these lines, Natech President and CEO Athanasios Nevrozoglou explained to Mondato Insight that many Greek-native startups are transferring their registered offices abroad due to poor government policy and coordination.

“One of the biggest issues in Greece is stability. Laws are signed with retroactive effect, and startups decide to relocate in fear of uncertainty. They also fear disingenuous competition, as it is common for firms to call the tax office on their competitors to perform checks that usually last one year.”
Athanasios Nevrozoglou, President and CEO, Natech

The resulting dependence on international markets is a double-edged sword for Greek companies: though providing stable revenue, it limits profits that are increasingly corralled by a multi-layered international ecosystem. The fastest growing segments in Greek fintech are already trying to acquire international support to ensure their dominance and financial stability. Subsequently, emerging sectors, such as digital investments and alternative banking, fall further behind, as they already face increased competition on both national and international levels. To ensure full development of the fintech sector, more opportunities need to be formulated locally while still keeping international funding flowing.

To promote Greece’s economy, it is essential for tourism — more than a fifth of Greece’s GDP prior to the pandemic — to move from basic digitization to the intelligent use of data for the creation of new products and services. At the same time, the inflow of wealthy tourists naturally encourages digitization. Whether it is new payment methods offered by travel providers or developments in the way money moves between industry participants, the tourism industry presents a great opportunity for the fintech sector, and vice versa.

Yet the imposition of foreign investment funds mitigates the impact that tourism-related money and technology has on growing Greece's technology sector, as opportunities are exploited by foreign, powerful corporations, rather than smaller local entrepreneurs. Blackstone’s total investment portfolio in the local hotel sector reached more than €250 million this year with the acquisition of Elounda Blu Hotel in northeastern Crete. Some in the Greek tech ecosystem view such steps negatively, as local players will face increased and possibly detrimental competition in Greece’s most lucrative sector. Others consider foreign investment an opportunity to increase Greece’s visibility and attractiveness in the global arena in the belief that rising tides lift all boats.

Tourism is only the most visible component of this delicate balance Greece must strike between foreign investment and local innovation. EquiFund, Velocity.Partners, Finloup and Viva Wallet are among the numerous stakeholders who form different dependencies both internally and abroad to support each other’s innovations. Consumers will be able to benefit from fintech solutions while encouraging local solutions to catch up to continental leaders.

With Greece hosting such solutions with funding from the E.U., diaspora, or its tourism networks, the initial technical knowhow and funding is in place for a once-struggling ecosystem like Greece’s to truly get off the ground. The critics of neoliberalism may voice their concerns, and disruption always leads to winners and losers, yet these early steps by both the Greek government and external actors are essential if the pristine waters of the Aegean are to be brimming with fintech solutions — and a digitized economy on par with its E.U. brethren.

Femtech: A Kaleidoscope Of Opportunities And Vision

Will The Metaverse Transform Fintech As We Know It?