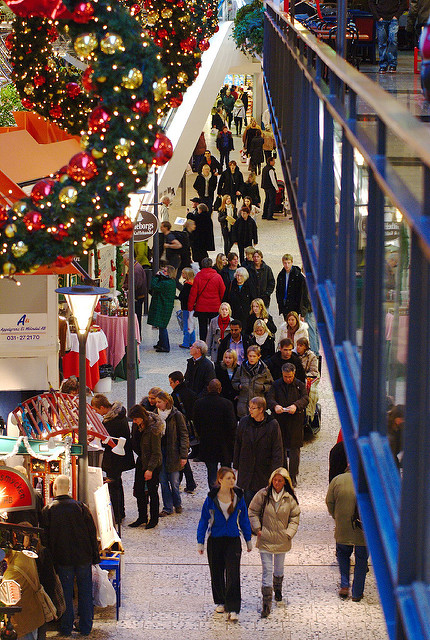 Ideas that have the potential to revolutionize shopping, and that have been percolating for some time, seem to be on the verge of breaking out from the test lab and onto Main Street. Automation, bots, machine learning and mobile devices all have the potential to transform how consumers will go about picking the perfect gift for Aunt Patsy. An important question for many retail workers, however, is whether this brave new world holds a future for them?

As Mondato Insight noted when Amazon made its foray into the payments space, the original name that Jeff Bezos chose for his online bookstore was 'Relentless'. The online consumer giant's recent entry into the offline retail space has shown that even if the owner of The Washington Post has given up on the original name for Amazon (if not the ambition), the spirit behind the company remains the same. The history of online retail has shown that where Amazon ventures, others soon follow. The question that may soon be causing sleepless nights for retail workers, however, is whether that rule also applies to offline sales.

The cause of this Amazonian insomnia is the announcement that the "Everything Store" is not letting up on its attempt to redefine retail. Amazon Go, a brick-and-mortar retail store open to certain Amazon employees in downtown Seattle, is being hailed as the first "grab-and-go" shop. Consumers simply check themselves in at the door using an app-based QR-code, take whatever they want from the shelves, and walk out. It is so frictionless, it almost feels like theft (see below). But will it spell more doom and gloom for the retail sector, especially its workers, already under pressure from online retailers?


That is certainly the fear that has been expressed by union officials representing shop workers. "Amazon believes that America’s hardworking men and women are irrelevant to customers — they couldn’t be more wrong,” Marc Perrone, international president of the United Food and Commercial Workers International Union (UFCW), bellowed in a statement. This critique, however, fails to understand the underlying principles that drive Amazon. Despite being one of the largest companies in the world, the business is still very much driven by a startup mentality. The company might be testing the hypothesis that checkout staff are irrelevant to customers, but is unlikely to believe it until the data tells that story.

As has been discussed on these pages before (see below), the ongoing digital transformation will pose challenges to every sector of the economy, including many jobs on the lower rungs of the professional classes. And although it is perhaps understandable that retail workers' unions are nervous about the future, their members may actually be in a somewhat more secure position than many others in the supply chain.

From the factory's door to the consumer's, robots are transforming logistics, transportation and retail. One estimate forecasts 1.7 million American truckdriving jobs being lost in the next decade, as companies such as Otto put self-driving rigs on the road and leave former truck drivers sitting at the side of it. For context, that alone is equivalent to around one fifth of the total number of jobs lost during the 'Great Recession' of 2007-2009.

As digital sales continue to expand across the retail spectrum, they necessitate strategic, long-term decisions for supply-chain management. Perhaps inevitably, companies are increasingly making long-term investment decisions in robotics. The Hudson's Bay Company, known in North America for its Hudson's Bay and Saks retail outlets, recently boasted on an investor call that in order to keep up with 13% quarterly growth in online sales, its new automated distribution center fulfills online orders at a rate 12 to 15 times faster than manually. And no A/B testing will be required to discover whether consumers prefer robots or humans moving parcels in warehouses, as they won't know the difference. But just because it may be possible to remove humans from front-facing roles, that doesn't mean it will ultimately be desirable.

Mondato Insight has often noted with approval the observation that "everything can be digitized will be digitized." But perhaps the holiday shopping period is the right moment to reflect on the limits of that dictum. It will undoubtedly prove to be true in the majority of cases, but basic laws of supply and demand will also dictate that human interactions, where they remain, will become more valuable (so long as people do not become acculturated to avoid them.)

And luckily for the retail industry's human workforce, people are able to do one thing that, for the moment, no computer can ever do: be people. A cashier-less future need not mean a human-less future. Consumers venture into brick-and-mortar stores for one of two reasons: necessity or choice. And as it increasingly becomes possible to buy anything online, and in some cases have it delivered to your door within hours (or an hour in some big cities), a large proportion of those hardy souls who continue to provide footfall to stores large and small do so by choice: they choose to have a retail experience.

For some consumers the perfect retail experience is a solitary meander around a store, some "me-time" in which the shopper can find peace and quiet against the white noise of 'muzak'. But for others, human interaction and communication is the main attraction, escapism in the form of distraction rather than solitude. And in a world where digitization reduces the number of meaningful person-to-person interactions that people have in their day-to-day lives, the occasion to converse with other adult humans may in itself become an even more attractive opportunity.

All this, of course, requires a re-envisioning of what a retail experience might look like, perhaps as much as the basic fundamentals of "grab-and-go" do. iBeacons, for example, have somewhat failed to live up to expectations, in part because consumers found them to be a bit creepy. How to avoid the "Uncanny Valley", where people are turned off by automation that is almost human, is a problem that poses a major hurdle to the effective deployment of machine-learning and data, both big and small.

The fundamental calculus changes, however, when consumers who check in are rewarded by not having to check out. For many involved in the intersection between tech and retail, it is easy to get caught up in the tech side of things, perhaps to the detriment of a more full understanding of what a retail experience actually is for many consumers. Some companies are making innovative attempts to strike this balance. Trunk Club, (a personalised "mystery box" clothes service for men, acquired in 2014 by Nordstrom for a rumoured $350 million) has in recent years opened up a number of physical stores. Armed with data about what the customer does and does not like, based on their purchases and returns from their "trunks", sales staff then provide a personalised private in-store shopping experience, based on the customer's measurements, tastes and needs.

This, perhaps, points to a more human-oriented vision of what a more automated retail experience might look like. Well-trained sales staff, armed with a tablet computer or smartwatch and a profile of every consumer that walks in through the door, have the potential to act like the consummate butler: omnipresent and omniscient when needed, but invisible when not. A mention of certain fragrances on sale (including your wife's) dropped into a casual conversation is a less aggressive and more effective than a push notification on a smartphone triggered by an iBeacon.

While the future of retail is clearly one of change and uncertainty, it is not necessarily the case that "grab-and-go" shopping sounds the final death knell for Main Street and retail-park shopping as we know it, and all the retail jobs that depend on them. In this brave new world of automation, with more brick-and-mortar space to move around in and no checkout lines to endure, offline, personalized shopping with a human touch has the potential to be very appealing.

And luckily for the sakes of Rudolph and co., the lack of electricity at the North Pole means their jobs are probably safe from the robots for a few more Christmases to come.