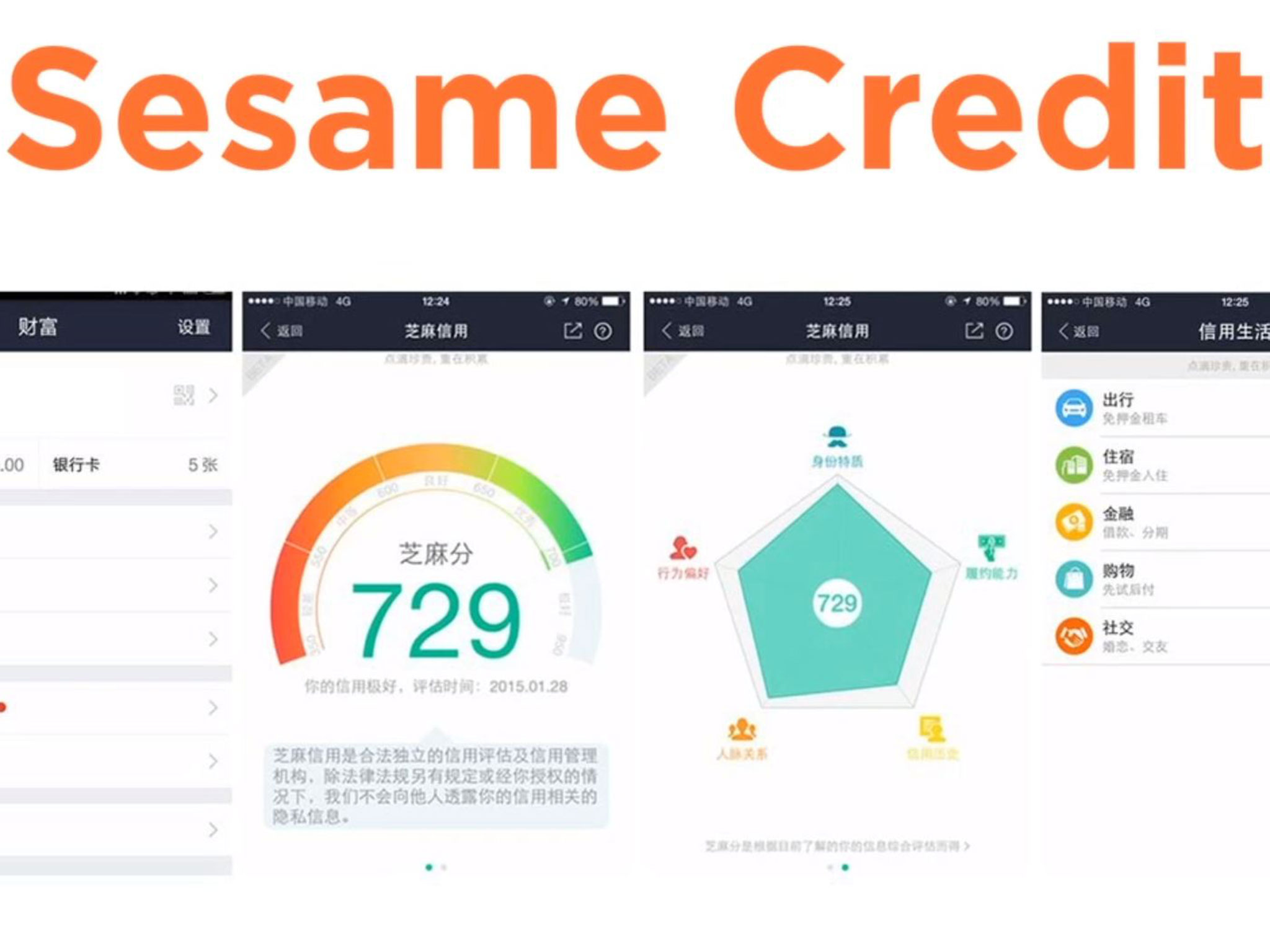 Although it has been around for a few years, in the past few months Alibaba's Sesame Credit has been getting increased amounts of attention in Western media (both social and mainstream), particularly in the United States. Billed as "quite clearly something out of dystopian science fiction" and "one of the scariest things in quite a while", Alibaba's credit rating model has been on the receiving end of a lot of bad press. Unfortunately, though, there exists ample confusion about what Sesame Credit actually is, and what it is not, as its critics often confuse it with the Chinese government's proposed "social credit" rating system.

Largely unknown abroad just a few years ago, China’s Alibaba Group is now a major international Digital Finance and Commerce (DFC) player. A key ingredient in the e-commerce giant’s success is its ability to gather data about users across different online platforms. By controlling a variety of e-commerce, video, payment, social media, travel and other digital real estate, Alibaba is able to collect more than 3,000 data points on each customer, allowing the company to build an extremely accurate profile for each user. Much more so than its Western rivals, Alibaba knows so much about its customers that in some cases its servers know what they want to buy before they themselves do.

Part of what sets Alibaba in a different league from its global e-commerce peers is its digital finance arm, Ant Financial, which operates its Alipay mobile wallet and QR-payment app. Alipay means that Alibaba can track both digital payments to third parties made within the Alibaba ecosystem, such as bill payments or taxis ordered from Didi Chuxing, and offline payments made to brick-and-mortar vendors ranging from vegetable sellers in the marketplace to settling accounts with a "Genius" in the Apple store. The picture of the customer and their habits that Alibaba Group can build up is one that even Jeff Bezos can only dream of.

Meanwhile, in recent years under President Xi Jinping, a crackdown on dissent and an increased level of Communist Party control over all sectors of society has heightened concerns about what a totalitarian state could do with all this data, if and when it chooses to access it. And, unsurprisingly, in 2014, the government announced plans for a new "social credit" scoring model, that could be used to rank Chinese citizens in accordance with their financial, moral and patriotic probity, opening doors to the well-behaved and obedient, while singling out potential troublemakers and creating new opportunities for the state to make their life difficult. A forerunner was piloted in Suining County, Jiangsu Province, in 2010, but was later abandoned due to concerns about its fairness.

This, then, is the general background against which Ant Finance launched a new credit rating model, Sesame Credit, around the same time as the government announced its plans for a social credit system. The result has been, predictably, a minor freak-out in some quarters about Alibaba's dystopian plans to monitor Chinese citizens on behalf of the government, and a major confusion between the two systems and what they involve.

The giant Chinese equivalent of Amazon is leading the race to derive an #automated rating #algorithm for all citizens of #China. Their affiliate company, Ant Financial, have created a service known as #ZhimaCredit (Or #SesameCredit) and this is what they will be rated on#bigdata pic.twitter.com/Fjd1Fa8M5L

For while the government's plans at a social credit system are very transparently an attempt at shoring up social control in a one-party state, Sesame Credit, along with Tencent Credit and other similar private rating systems, serve an important, and desired, market function, both in terms of digital finance and online commerce. Simply put, in China with its enormous population and high littoral population density (in Shandong province alone, if you are one in a million there are still 93 more of you), there exists low levels of social trust and few trusted intermediaries on either a personal or commercial level.

Knowing whether someone can be trusted for a loan, or a date, or an online purchase, or even to sell you untainted meat products in your chao mian, is the sort of information that is in huge demand. Moreover, Alibaba is both a highly trusted third party, and has data on its servers that may hold many of the sought-after answers. In this light, the development of Sesame Credit was almost inevitable.

Nevertheless, Sesame Credit did come about with the imprimatur of the People's Bank of China, as one of 8 private credit rating systems authorized in early 2015. At the time Ant Financial did announce its intention to help build a "social integrity system", and this has led some to view Sesame Credit as a pilot version of a national "social credit" system, the plans for which were announced in 2014. Coincidence or not, Ant Financial insists that it is not an agent gathering information for the government.

Zhima Credit does not share user scores or underlying data with any third party including the government without the user’s prior consent.Hu Tao, Sesame Credit General Manager

And yet, as parodied in the Netflix TV show Black Mirror, an individual's Sesame Credit score is influenced by factors both objective and more suspect, and can lead to forms of social apartheid. Just as an example, one of the elements that contributes to a Sesame Credit score is your "Connections", meaning the Sesame Credit score of those in your network, birds of a feather being, presumably, the underlying principle. Getting friendly with someone with a lower score can drag yours down, and by extension those of your friends and so forth, potentially hardening divisions in society between the good score "haves" and "have nots".

Too Close To Home?

Sesame Credit raises enough areas of potential concern in and of itself without conflating it with the Chinese government's social credit plan. As far as anyone can tell, "loyalty to the government" is not a factor that contributes to an Alipay customer's Sesame Score. Yet, all too frequently, this is the first charge laid against it.


"There's got to be something about this that I don't understand..."

Perhaps this is understandable, because it distracts from the more mundane yet much closer to home question of to what degree do we already live under a hidden system not too far away from Sesame Credit? How many of us know what factors go into our FICO score, or what other data Equifax held on us? Or what exactly have we shared with Twitter, Facebook and every other third party we have used a social network to sign up to? What judgments are being made about us without us realizing it, by virtue of our LinkedIn profile?

Indeed, why do holders of certain credit cards in the U.S. get fast-tracked security at the airport, or a dedicated check-in desk at the hotel? These are all perks associated with being creditworthy in the United States, and are viewed as mundane, yet when combined in a mix with "technology" and "China", for many people they take on a deeply sinister aspect and evoke images of a dystopian nightmare.

But like any system that attempts to grade and score people, Sesame Credit holds the very real risk of boosting those who are already winning, and beating down those already low on good luck. Yet, at the moment, in many aspects of Chinese life, constantly fearful of fraudsters and thieves (of which there are many in a country of 1.4 billion people), people are calling out for third parties to help them navigate the lack of trust in society. Given the enormous power that that third party will then hold, however, it seems unlikely that the government will leave this task to the private sector forever, even if the holder of such power is a trusted entity such as Alibaba.

The big question will then become does the government limit itself to sponsoring a purely financial / credit scoring system, run by the People's Bank of China? Or does it succumb to the temptation to further gamify society and create a scalable social credit system that actually does all the things that people fear Sesame Credit already does? And if so, is it better or worse for such a system to be run by the government, or by one huge private company? The Chinese government clearly has concerns and is conflicted on the answer, reflected in its decision last summer to cancel plans to grant licences for the operation of a full social credit scoring system, as opposed to the more limited nature of Sesame scores.

There are no immediately obvious answers to these dilemmas, but in this context it is easy to see the attraction in China of concepts like blockchain, which purports to remove the need for trusted intermediaries. And yet, ironically, in China it is the alleged democratic nature of the blockchain that lies at the root of some of the official resistance to it. Given, however, the Chinese government's apparent desire to stamp out cryptocurrencies within the country, that may be a straw in the wind of who China's trusted third party credit scorer is likely to be.

Staying in the good books of the government has allowed Alibaba to establish its dominant position in the Chinese market. However, the company is also striving not to be seen to be a pawn of China’s political system. Alibaba purposefully established the international headquarters of its cloud computing division in Singapore, not China, and a European data centre was established in Germany purportedly because the country has the most stringent data protection laws in the region. Earlier this year, Alibaba became a sponsor of the International Olympic Committee, reinforcing its ambition to gain global credibility, with an estimated price tag of around US$800 million.

A lot of the return on that investment will depend on how it handles sensitive issues around data protection, and ensuring that recruitment into, and operation of, Sesame Credit remains voluntary, objective and fair. It seems neither the company nor the Communist Party is keen on Alibaba being a policing agent of the state.