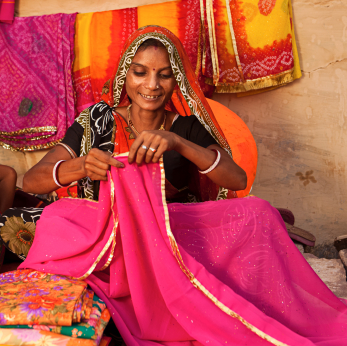 From school fees to groceries, women in emerging markets are often responsible for managing household expenses. However, a vast mobile gender gap and societal barriers often impede access to mobile financial services (MFS) and the associated socioeconomic benefits. Tapping into this immense market could thus have widespread impact – both for women at the base of the pyramid, and for MFS providers interested in raising their bottom line.

Despite dramatic growth in mobile phone ownership globally, now reaching nearly 5 million subscribers in developing countries alone,[1] women are still lagging behind. According to the 2012 GSMA Women & Mobile study, females in emerging markets are 21 percent less likely to own a mobile phone than males, representing a USD $13 billion missed market opportunity for the mobile industry.[2, page 6]

Reasons for this dramatic divide vary by context, but the study showed that prohibitively costly mobile phones were the primary reason for limited mobile ownership among bottom of the pyramid (BoP) women. Other reasons included the lack of need for mobile phones, and the fear of not being able to use the technology.[3, page 31] Social factors also factor into the equation, with 64 percent of married women reporting that they were hesitant to own handsets due to fear of disapproval by husbands or other male family members.[4, page 12]

Given the low rates of mobile ownership among women, fostering equitable access to mobile money services can be challenging – and low-income women in emerging markets are often unable to tap into the array of benefits associated with MFS, from financial security to expanded business opportunities.

In contexts where women are able to access mobile money platforms they are often avid users, illustrating a strong demand for these services among BoP women consumers. A 2009 case study of mobile money use in Kenya showed that 48 percent of mobile financial service consumers were women.[5] A more recent series of surveys showed that women in Kenya match men “coin for coin” in the mobile money transfer market.[6]

In neighboring Tanzania, women are similarly enthusiastic mobile money users. According to a 2011 CGAP report, for example, two-thirds of the women in a community-based savings group had a mobile money account, which they used frequently to send money to children, receive money from relatives, load airtime or receive payments from customers.[7]

As these studies illustrate, designing targeted mobile money services can assist in meeting the specific needs of BoP women. Research conducted by mChek in India showed that women often value mobile payment platforms because they provide the option to safely store money on a SIM, out of reach of husbands or other family members. Further, by using mobile money transfer, women reported that they no longer needed to travel to male-operated retail kiosks to recharge prepaid mobile credit, an activity often frowned upon by their husbands.[8]

Additionally, through access to alternative financial services like mobile microsavings, women can ensure that funds are available to pay school fees and other household expenses even in times of income insecurity.[9] Mobile-based credit services can enhance access to microloans for women entrepreneurs – providing seed capital to build small businesses. According to a 2011 report released by the Cherie Blair Foundation for Women, over 88 percent of women entrepreneurs said they would be interested in using mobile value-added services to address key business challenges, while more than 82 percent indicated a willingness to pay for them.[10]

While enhanced access to MFS among women boasts an array of benefits, expanding these services can also carry certain unwelcome side effects. For example, the GSMA study cited above reported that mobile phone ownership makes husbands “suspicious” in certain contexts, with the potential to spur increased domestic violence.[11, page 9] Globally, expanded access to mobile phones can disrupt instilled gender roles, empowering women with a sense of freedom that others in their communities may resist.

Another danger cited in a Mobile Active blog post is the potential for “financial substitution” – the idea that money normally reserved for household expenses would be diverted to mobile phone payments. However, it can be argued that this diversion is justified – particularly where innovative mobile products (such as mobile microsavings) lead to improvements in livelihoods and income generation.[12]

Targeting women with MFS thus presents an opportunity that providers must navigate cautiously, with a nuanced understanding of the regional and cultural contexts in which their services are being introduced. Mobile money providers further need to instill trust among targeted communities – including both women and men – through marketing and educational campaigns. After all, without community buy-in, mobile-based disruptions are unlikely to see widespread adoption and use.

For MFS providers, expanding mobile money access to women has the potential to boost revenue – driving adoption and reducing churn over the long term. In emerging markets, 20 percent of women do not own mobile phones because they do not see value in purchasing voice or data offerings (as most communication is local).[13, page 31] Offering value-added services like MFS may address the specific needs of these women, driving them to sign up for mobile services. According to Valerie Rozycki of mChek, “telecom operators should focus on acquiring these women customers through mobile banking and payments first and then eventually engage those customers for communication services.”[14]

Widening the customer base and fostering loyalty, this strategy has the potential to spur huge pay-offs for mobile money providers, particularly those that are led by mobile operators. With women representing a $13 million revenue opportunity, mobile operators that are able to tap into this market will have a significant edge over other players in the space – which is critical in the highly competitive mobile market.

Assuming the socio-cultural context has been thoroughly assessed, what can MFS providers do to enhance access to mobile money services among women in emerging markets? A key factor will be bridging the digital divide, and addressing existing barriers to female mobile ownership. This could be accomplished through educational campaigns to increase the technical literacy of mobile phones among women, or the development of low-cost mobile handsets accessible to BoP women consumers.

For women living at the base of the pyramid with low, and often unpredictable, incomes, managing household expenditures can be a huge burden. However, expanded access to targeted mobile money platforms – from budgeting tools to mobile microcredit – can offer a potentially life-changing solution, while simultaneously increasing the bottom line for MFS providers.

"M" Is For Micro-Entrepreneurs