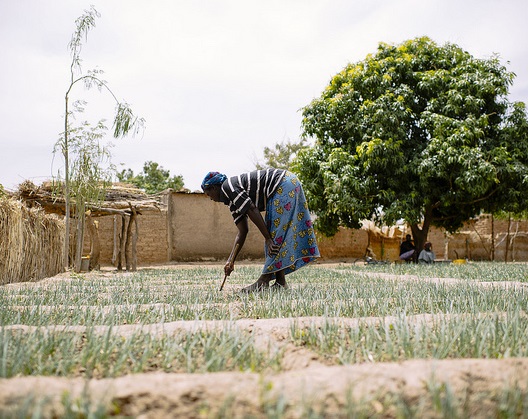 Technological innovation is disrupting agricultural value and supply chains, no matter whether in relation to pre-cultivation, cultivation and harvest, or post-harvest processes. Digital finance, coupled with advances in Internet of Things (IoT) technology, has the potential to deliver powerful solutions that could boost supply-side optimization of output, as well as widening market access on the demand side. <!--- The feedback effect between optimization and mechanization will drive profits, thereby bolstering payments between the various actors within the agricultural chain.---> Digitization, including digital payments, can be a powerful catalyst in this growth cycle. 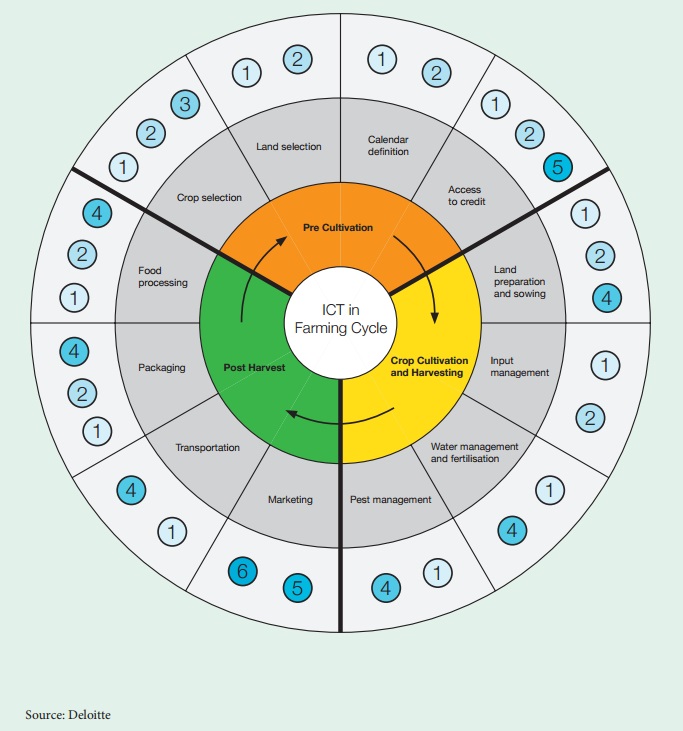 While the long-term consequences of climate change, and its connection to agricultural productivity, are still mostly theoretical, evidence is mounting that suggests volatile short- to medium-term effects. This threatens an already precarious industry, as the majority of the world's farmers are equipped with neither the capital nor the technological know-how to weather years of drought, soil erosion, crop fluctuations, epidemics or blooming populations of agricultural pests.

In fact, according to research from the International Fund for Agricultural Development IFAD, the yields of small-holder farmers constitute up to 80% of agricultural production in Asia and sub-Saharan Africa. A staggering 2.5 billion people are reliant on the sector as a source of income. To complicate matters further, 85% of smallholders are subsistence farmers. Without a surplus to sell in the marketplace, this community is most susceptible to external shocks. If innovation were ever to be needed in a sector rather than be simply desirable, then agriculture is it.

User-centered credit initiatives for farmers have proliferated across the world, often employing a "mobile-first" design. Under the umbrella of MercyCorps, AgriFin Mobile Programme designs financial products - bundled with crop management tools or other applicable offerings such as insurance - and implements the services through localized partnerships. One such initiative is in Indonesia, where Bank BPR Pesisir Akbar scrutinizes application profiles and distributes loans designated for seeds and agrichemicals through the mobile LISA platform. As a means to encourage engagement, LISA incorporates agricultural best-practice advisors who can communicate directly with the loan recipients. As the product evolved, Asuransi Central Asia integrated a crop micro-insurance crop facility in the event of crop failure due to drought or cyclones. As financial institutions seek in-roads to introduce farmers to their business products, it is likely that many will rely on partnerships ("an ecosystem approach") as a way to better connect with farmers.

In Africa, Mobile Network Operators (MNOs) are the centripetal force in pre-cultivation resource allocation. GHG, in alliance with AgriFin Mobile Program and Innovate More (U), issued more than 60,750 e-vouchers, redeemable for vegetable, legume, or cereal seed in Uganda. Agro-input dealers were able to monetize e-vouchers via the MTN mobile money platform. By the close of the project in July 2016, MTN had transferred 53,072,500 UGX to 24 agro-input dealers. The Nigerian government deployed a similar technique in a bid to combat faltering agricultural output and a ballooning food import ledger, digitizing government subsidies through an e-wallet powered by Cellulant. The undertaking has culminated in more than 70 million transactions, translating to approximately 1.3 million metric tons of fertilizer and enhanced seed.

The private sector is equally well-positioned to facilitate effective input spending, conditional on the basis that information is transparent and communal. In India, ICT is expediting farmer-to-farmer learning. SMS push notifications have also proven fundamental when centralized bodies, such as government, disperse time-sensitive advisories. Look no further than Zimbabwe for evidence as to how life-or-death information sharing is, during times of weather extremes and unpredictability.

You Reap (How And) What You Sow

ICT technologies are at the forefront of promoting input and price selection efficiencies. But that is only a glimpse at the full potential of data collaboration. Between machine-to-machine (M2M) learning and IoT, the depth and sophistication of data ready to be harvested (if you pardon the phrase) throughout the cultivation period is enormous. Insights can be distilled by cross referencing related data from thermometers, wireless sensor networks, satellites, voltage transducers, or radio-frequency identification tags (RFID). If farmers opted into collective data dumps, analytics could, for example, identify an optimal temperature for a specific crop within a certain region.

These tools can be extended to financial and payment service providers. In Kenya, CGAP has funded FarmDrive's venture to deliberate on how to best leverage satellite images in order to fully plot planting cycles, crop yields, and patterns in production. Financial institutions will then be able to infer and project future revenues, timing of income and conceivable defaults in payments. With this knowledge, micro-finance institutions, in particular, can be confident in both the repayment of loans and the value of their products for their patrons.

For this scenario to become a reality, wifi coverage (in some of the most rural parts of the world, no less) would have to be dependable instead of erratic or none-existent. Even in developed economies, this is not a commitment telecommunication companies have faithfully executed. During a Senate hearing last October, Cory Reed, SVP of intelligent solutions for Deere & Co., spoke to the daily chore for farmers in migrating information between equipment apparatuses through flash drives, as wifi connectivity can be uncertain. In fact, he emphasized that current rates of data transmission hover around 70 percent, a figure he anticipated would drop to about 50 percent if infrastructural shortcomings were not resolved. The situation in developing economies is even more acute. According to the ITU, in Africa alone, only 20 percent of the continent's population is connected to the internet. If M2M Learning or IoT are to have any real impact, connectivity first and foremost, has to become universal. <!--- Outside of the data aggregation, there are opportunities inherent in IoT application to protect and boost crop returns while minimizing labor investments. The use cases of such technology seem to be bounded more by human imagination than technical capacities, as the latter will arrive with time.

In emerging markets, the trend appears to be the communication of real-time agricultural variables to human-controlled portals. The "mobile Internet of Things for Agriculture" project in Xinjiang exploits wireless monitoring of agricultural greenhouses. The Ethiopian Soil Information System (EthioSIS) fuses satellite imagery with recent and historical soil compositions to inform fertilizer choice and management. Nano Ganesh allows for remote control- even from 2G mobiles- of irrigation pumps.--->

This Little SME Went to the Market

IoT will, eventually, have a decisive role in the streamlining of post-harvest operations. From cooling to cleaning, sorting to packaging, storage to transport, these processes are subject to a certain amount of urgency, as spoilage is a pressing concern. The value-add for systems that could pinpoint the ideal shipping date for food stuffs would catalyze a domino effect of increased production and reduced waste for all parties involved. Similarly, the delivery of appropriate seeds, fertilizers, or agri-chemicals could become the result of the calculation of data from the ground, the weather, the water, and other factors. And, of course, the crowning glory of this process would be automated digital payments.

While this may be the dream, the here and now of emerging markets speaks to more immediate hurdles for post-harvest enterprises. In a conversation with Innovare Advisors - a firm that specializes in the alternative investment of SMEs in the agribusiness value chain - Mondato Insight delved into the barriers most often confronted by these companies. According to Roger Frank, the Chief Marketing Officer, post-harvest SMEs suffer from financial constraints, hindering their desire to scale-up in accordance with market demand. A whopping 30-40% of agricultural production is lost due to the disparity between supply and demand for equipment.

What is of more interest, though, is the lack of information - at least in regard to SME credit indicators - Innovare Advisors encountered as it expanded through Africa. While its business model still leans on brick-and-mortar, the ambition is to fully materialize the agri-business chain across multiple geographies in a coherent way that will give way to digital applications. As Mr. Frank acknowledged,

"We are really two steps away from creating a Fintech solution. However, there is a tremendous opportunity here. The SMEs are too large to transact with micro-finance institutions, while also too limited in scope to attract the attention of traditional banks. There were over 50 funds in Africa providing private equity finance at the time of our due-diligence research, but none were financing debt, especially SME debt."

In order to address this asymmetry, private and public stakeholders should circle back and evaluate as to whether or not SMEs in the agricultural sector have been neglected.

When It All Comes Together

If farming is to keep pace with burgeoning, growing and hungry economies, all points along the value chain must be supplied with the proper capital. Capital will then be the enabler of technology, which, ideally, will be embraced in a way that both complements localized competitive advantages and leapfrogs lessons learned from developed countries. If governments adopt the right regulation, a trifecta of capital, technology, and policy will support the objective of feeding not just the 7 billion people of today, but the 9 billion of tomorrow (2050). With the ominous threat of irreparable climate change creeping into the foreground, optimization in agriculture is a necessity. Digital finance and IoT innovation are two important pieces of the puzzle to create the means to this end.