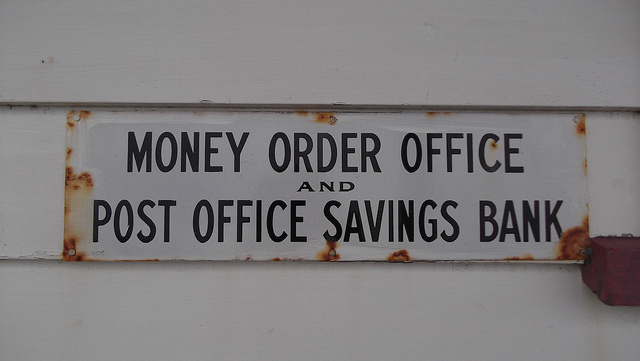 Over the past year, Mondato Insight has noted the central role that logistics has to play in the Digital Finance and Commerce (DFC) ecosystem, whether it is in developing or developed markets. And while private firms play a significant role in this sector, in advanced economies the postal service plays a pivotal role in the (literal) delivery of e-commerce. In emerging markets, however, it is quite often the case that private companies have to step in precisely because of deficiencies in postal delivery of e-commerce.

Recently, however, postal services are stepping up to become more significant players in the financial side of the DFC space. This shouldn't be surprising. In many countries, post offices have had a tradition of offering a limited range of financial services, from remittances and money orders to government payments and savings accounts. Additionally, in some jurisdictions, telecommunications fell under the aegis of single Post and Telecom operator that was usually a government monopoly. And although the liberalization and privatization of these services was a necessary precondition for the functioning of healthy and competitive market of Mobile Network Operators (MNOs), until recently, post offices and postal services had only marginal roles to play in the development of digital financial services (DFS).

Late To The Party

That may be all about to change. There is a growing realization among many stakeholders that postal operators are superbly positioned to act as digital financial services operators, already possessing two of the three essential infrastructural components necessary for the effective development and operation of a DFS network.

In addition to existent infrastructure, postal operators in many markets also have possession of an intangible quality that is nonetheless essential to the provision of DFS: trust. According to figures from the Universal Postal Union, 1.5 billion people around the globe already access financial services through a post office, making them from the offset, unlike MNOs, institutions that are trusted by consumers to safeguard their money. This is an important reason behind partnerships between postal operators and fintech companies or MNOs in which the DFS provider is able to leverage the postal operators' branch network and trusted brand. A recent paper from the ITU DFS Focus Group, entitled "The Role of Postal Networks in Digital Financial Services" and authored by D. Avsec and N. Clotteau, has documented 22 such partnerships. Furthermore, post offices generally have the resources and experience as providers of financial services to successfully manage liquidity - a problem that is often a significant barrier to the adequate provision of agent-led DFS.

Thus, for example, as the ITU notes, in Tunisia all three of the country's MNOs have decided to partner with Tunisia Post as their (required) financial institution partner for the provision of financial services, while in Kazakhstan, Kazpost partners with the fintech company Intervale to offer a range of services via the Kazpost networks and Intervale's internet and mobile platforms.

Despite operating the most widely-distributed postal network in the world, with 154,000 post offices, India Post (part of India's Ministry of Communications and Information Technology) has remained largely locked out of the financial services sector in the world's second-most populous nation beyond the traditional purvey of postbanks. India's government was until very recently wary of India Post's ability to offer more complex financial products such as credit that strayed beyond the Post Office Savings Bank's traditional savings and basic insurance offerings. That approach has dramatically changed, however, in recent years, as the government of Prime Minister Narendra Modhi has sought to drive forward an enormously ambitious financial inclusion agenda that is attempting to secure "universal access to banking services" (for an in-depth look at India's DFS journey see a previous Mondato Insight here.)

A key element of the plan (commonly known by its Hindi acronym of PMJDY) has been the creation of a new class of payments banks, the first tranche of licenses for which were approved in August 2015. During the summer of 2016, however, the Government of India announced its initial plans to open 650 branches of a new India Post Payments Bank within the next twelve months, backed by an investment of ₹8bn (approximately US$120 million). This is to be followed by an expansion to cover the whole country within the following two years. But as a former World Bank analyst told Mondato Insight in a recent interview:

India Post already provides a range of savings products in rural areas, especially where banks don't have outreach. Digitizing the post could enhance the products. However, technological advances are low-hanging fruit. The real challenge is to professionalize the fleet of branch post masters on the ground, add more staff, and train them to provide services to the unbanked. The unbanked in rural areas often don't feel confident approaching bank branches, and the financial language and instruction is complicated and obfuscating. If India Post can offer low cost, efficient services to this segment, that will be a game changer in the market.
Shweta S. Banerjee, PhD candidate at the University of Toronto.

If successfully implemented, India Post Payments Bank could be a key component of the largest single expansion of financial inclusion in history.

In pursuing this modernization and expansion of India Post's financial services operations, the Indian government is hoping to emulate the success of Poste Italiane. Long known in the 20th-century for having one of the worst postal systems in Western Europe that ran at huge losses, over the past few decades Gruppo Poste Italiane has transformed itself into a conglomerate provider of logistics, payments, savings and insurance, that includes ownership of Banca del Mezzogiorno – MedioCredito Centrale. The group's "non-traditional" operations made up 86% of Group revenues in 2014, while BancoPosta accounted for 64% and growing of the postal division (Poste Italiane SpA)'s revenues. In addition, Poste Italiane's MVNO, Poste Mobile, is the country's largest, with a market share of around 4%, accounting for over half of Italy's (admittedly small) MVNO market. Notably, however, according to ITU figures, 75% of Poste Mobile's customers use their phone to access postal financial services.

It is not just India Post, however, that is looking with admiration at the financial services sector and the role model of Poste Italiane. Once a profitable business, for the past decade the U.S. Postal Service has found itself in distress as its legacy systems have struggled to adapt to the digital transformation of logistics and e-commerce. In recognition of the changing landscape, a 2014 U.S.P.S. Inspector General White Paper proposed a move into the non-bank financial services sector.

The Postal Service is well positioned to provide non-bank financial services to those whose needs are not being met by the traditional financial sector... The Postal Service could help financial institutions fill the gaps in their efforts to reach the underserved. While banks are closing branches all over the country, mostly in low-income communities and inner cities, the physical postal network is ubiquitous.

The I.G.'s White Paper went on to note that, despite its perceived shortcomings, the Postal Service is one of the most trusted brands in America, and enjoys the trust of Americans at much higher rates than the banking sector as a whole. The 2014 report is both cautious and limited in its ambitions, taking care to note from the outset (page i!) that the U.S.P.S. should "become a bank or compete with banks." It is arguable, however, that in the current populist political climate, a proposal to use the power of the post office to challenge the banking sector and increase financial access could well find favor with the public (though that is nonetheless a largely separate challenge to finding favor among legislators).

As the ITU paper on "The Role of Postal Networks in Digital Financial Services" elaborates, there are numerous business models, from correspondent banking to fully-fledged Post Banks that can be adapted to fit the political circumstances and market needs of any individual country. And, furthermore, it is indisputable that the digitization of financial services presents an opportunity to extend the reach of the formal financial sector to under- and un-banked populations. Countries such as Brazil have shown what can be achieved with the right mix of regulation and incentives.

But the opportunity goes further: the Universal Postal Union has developed its own set of "payment rails", the 'International Financial System', a software application for the secure and expedient electronic transfer of international and domestic money orders. This presents an opportunity for postal operators to compete seriously with banks and other forms of remittances.

The time is ripe for postal operators to leverage their position as providers of both logistics and financial services to drive forward DFC in many markets. Opportunities abound, for example, for postmen to act as cash-on-delivery payment agents, perhaps utilizing mobile money to reduce leakage and fraud. In many markets globally, both developed and developing, postal operators have the potential to be catalysts for growth in Digital Finance and Commerce. But does the political will exist, and who will follow India's example?

Move Over Techies, Farmers Are the New (and Old) Frontier