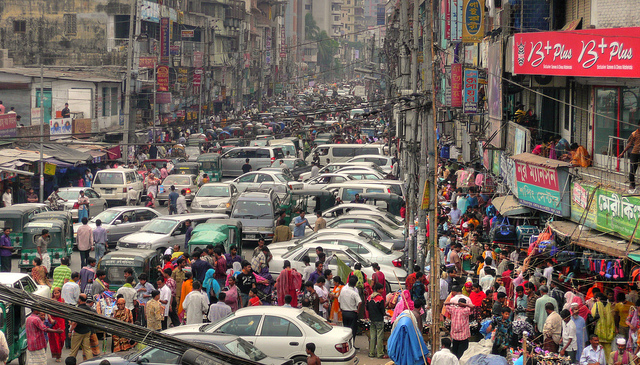 Humanity faces the mammoth task of adding over 2 billion people to the urban population before 2050, the equivalent of creating a city the size of London every month for the next two decades. The impacts of this growth have been compared to the Industrial Revolution, and Africa will confront these challenges more so than any other region. For African cities and towns today, this represents an opportunity to capture the historical wealth premium associated with urbanization, or suffer the consequences of urbanization without growth. Against the backdrop of what many call the Fourth Industrial Revolution, further catalyzed with the disruption brought by the convergence of digital technologies, what clues do urbanization trends in mobile money hotspots provide for successful growth strategies, financial inclusion imperatives and the DFC ecosystem?

Africa Is Not A City

The United Nations estimates that around half of Sub Saharan Africa is urban now, projected to reach 75% by 2050. Going deeper into these broad figures gives a better sense of the last-mile challenge of customer acquisition at scale: as much as half of non-urban Africans live between 1 and 6 hours from the nearest city of more than 50,000 inhabitants, while nearly one in five live 6 hours or more away.

Indeed, despite the attention garnered by Africa’s best-known urban agglomerations like Lagos, Kinshasa or Johannesburg as the darlings of African urbanization, the majority of new urbanites (of which there will be an additional 187 million by 2050) will be found in cities of less than 1 million. Organizations aiming to capture significant market share or make a significant dent in the financial inclusion challenge should brush up on their geography, because it is secondary cities many have never heard of, like Zinder in Niger, that may wind up being the real locus of change and opportunity.

High fertility rates play a significant role in the unparalleled rates of urbanization observed in Africa, but they are not the only reason. Climate change, though hard to predict at a local level, will speed up urbanization where it manifests as reduced moisture, as it will particularly across the Sahelien cities of West Africa and certain Southern corridors.

This Sub Saharan experience will clearly be felt beyond its borders - already, the issue of illegal immigration to Europe is clearly on the minds of the French, British and German leaders that have visited the continent recently. As African urbanization also means the addition of Africans to global (particularly European) cities, perhaps we should view the future of the African remittance market through the lens of African cities’ climate resilience, as those with the largest diaspora tend are also the largest recipients of money sent home. 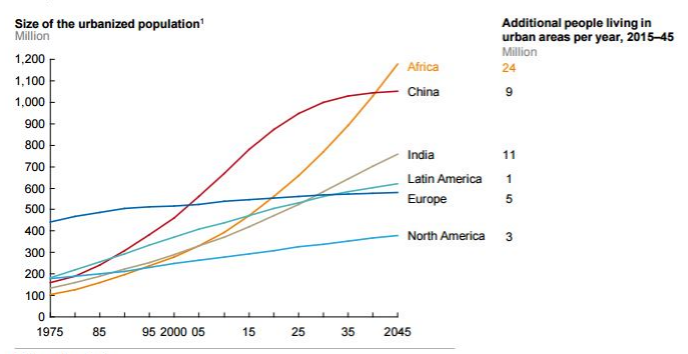 African countries are of course not the only ones realizing the urban challenge. India is holding its first annual mobility summit, directly involving its senior-most politicians in the complexities of urban policy and planning. India’s particularities serve to illustrate how important local context - particularly social and regulatory - influence growth strategies. In India, the definition of “urban” dictates how much federal subsidies a city receives, resulting in the strange situation where fast urbanizing municipalities actually stand to lose federal assistance as they cross economic threshold indices like population density or percentage of non-agricultural laborers. This may factor into which cities get financed as the country drives towards its all-electric vehicle vision, with companies like Ola (India’s answer to Uber, with over a million vehicles in 169 cities) and Mahindra’s electric 3-wheelers.

The particular importance of mobility to urbanization challenges should be obvious to anyone who has driven through a fast growing country’s capital and experienced that most frustrating symptom of poorly planned urbanization - traffic congestion. Though government has an enormous responsibility in nurturing cities into livable and productive spaces, the urgency of demand for solutions to today’s problems have marshaled the private sector to respond.

Uber, for example, operates in more than 15 major African cities, providing income to over 60,000 drivers and increasingly competing with local facsimiles like Little Cab in Kenya or Africa Ride in South Africa - both of which differentiate themselves by accepting payment through local mobile wallets. Other startups aiming to offer solutions to the challenge of overcrowded cities include Twiga in Kenya, raising 10.3 million USD last year for their B2B and B2C food-to-doorstep delivery service, and MAX, a Nigerian motorcycle service dedicated to beating Lagos’s notorious congestion. At the heart of these business models, unsurprisingly, lies the ubiquitous mobile device, along with the innovations in geospatial, location and mapping services offered by smart-phones.

If smartphones offer practical solutions, smart cities offer a vision. Though definitions vary, the ‘smart city’ concept is underpinned by the notion that optimal decisions and behaviors can be attained in city environments through the use of information and communication technologies. McKinsey describes the technological base required for building smart city applications in three parts: first, a sensor layer, collecting data through sensors like smart and dumb phones, air and water quality sensors, surveillance cameras, and waste receptacle sensors. Second, a robust communications layer, relaying gathered information through broadband, mobile networks, and even wifi. Lastly, open data data portals to foster innovation and adoption.

And although the promises of smart cities are enticing - India has pledged to build “100 smart cities” before 2022, while China says it will have more than 500 - it is too early to judge the criticism that they are merely secluded islands for corporations and the wealthy (and might even give the IT sector misaligned incentives in urban planning proposals) against the benefits they may bring to the urbanization challenge.

The notion that a smart city may be better able to cope with fast rising populations is unlikely to materialize without planning tools that represent a step change over the status quo. Indeed, even population census data, typically a laborious World Bank-funded exercise, gets completed once every 5 years - too long to provide actionable insight into some of the fastest-evolving real estate in the world. McKinsey notes that in Latin America, India and Africa, in particular, installing the sensor layer is both the most critical and the most capital-intensive first step towards reaping the benefits of smart urbanization.

Given the unwillingness of telecoms to release the precious data they control through call records, enterprising cities should learn from global data collection best practices and seek big data collection and management solutions that address key issues like mobility, security, utility service provision, healthcare and housing. Fortunately, an increasing array of tools are being developed that can lower the capital costs of this sensor layer, for example using crowd-sourced data or remote sensing from satellites and drones.

Mobile money operators are well positioned to play a key role at the intersection across these sectors, as the local-Uber examples above demonstrate. They also manage one of the deepest networks of digitally-fluent merchants in the thousands of settlements, market towns and secondary cities where high birth rates and rural migration are actively swelling tomorrow’s markets. Collecting and publically sharing city data could help mobile money operators better anticipate the challenges of urbanization as well: as the population around a mobile money agent intensifies, do the physical security risks of managing significant wads of local cash impact the franchise strategy? Fortunately, we can look forward to much interesting experimentation, in some cases side-by-side comparisons as may be the case of Akon’s Crypto City and the Government of Senegal’s Diamniadio.

Urbanization in Africa, perhaps more so than any other geographies, will bring the contradictions of modern cities - like malnutrition and obesity - side by side. This will happen in city centers, pop-up peripheries and satellites, as well as the burgeoning market towns and secondary cities where the importance of local context to customer acquisition is matched only by the need for urban planning data and tools. To capture the benefits of an urban premium, as well as play a unique role in shaping new communities, DFC actors need to go to where the people are - and empower them with the tools to shape the new world.

“If cities are able to integrate their services through ICT, they will be able to provide efficient and affordable services by [harnessing] meaningful citizen interactions, in addition to securing strong local leadership: from planning to implementation.”
African Smart Cities Strategies for Agenda 2063, African Journal of Management 2016

Image courtesy of [joiseyshowaa](https://www.flickr.com/photos/joiseyshowaa/2402764792/)
Click here to subscribe and receive a weekly Mondato Insight direct to your inbox.
Mobile,Mobile for Development (M4D),Africa,Demographics,Mobile Money
Share this article:

Women “Rise Up” To Address Gender Imbalance In Fintech