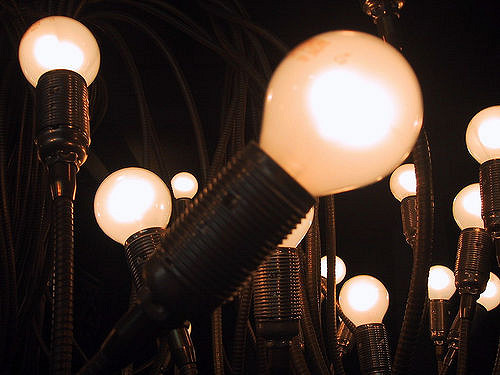 One of the ‘trendiest’ social impact investments historically targets off-grid energy products like solar lanterns, solar home systems and cookstoves. Aside from being a prerequisite for digital inclusion, access to electricity represents the first step into the technological modernity developed in the Global North. Modern energy access in the form of electricity not only affords quality of life improvements but enables digital connectedness to even the most remote communities via juice for their mobile devices, unlocking the ability to communicate, consume media for education or entertainment and perform increasingly sophisticated digital transactions, to name just a few powerful tools that create opportunities for wealth generation.

As social businesses addressing the Access to Energy (A2E) challenge gain traction in economic development circles tackling the delivery of such critical services to the base of the pyramid (BOP), the boom in the African DFC ecosystem in particular holds the promise that even rural societies may leapfrog the digital chasm separating them from richer countries. Yet persistent questions remain about the sustainability of the social impact business qua ‘public good provider’ approach. While the responsibility for scaling the foundational infrastructure for digital inclusion has been taken on by the off-grid energy industry, has it proven it can turn a profit for their investors -- or even for their customers?

A2E Unbundled: The Good, The Bad And The Ugly

Although there is much hype to be wary of in the ‘good news’ ethos of the social impact world, one shouldn’t ignore the real successes. Midway through 2018, the number of people gaining access to electricity in Sub-Saharan Africa outstripped population growth for the first time, signaling a tipping point in the battle against energy poverty. Countries like Rwanda, Tanzania, Kenya, Ethiopia, Bangladesh all increased their electrification rates by nearly 100 percent in seven years.

This is, of course, not the story of all countries tackling their energy gap (there is no dearth of dire situations), but the numbers do speak for themselves. In the past decade or so, industry watchers have tracked 55 million people experience night lighting and reliable phone charging for the first time, and 3.7 million people gain the ability to power a whole host of modern appliances from fans to TVs, stoves, and other temperature conditioners, sewing machines and hair clippers - to say nothing of the digital ecosystem flowering from mobile ubiquity across the emerging world, particularly in Sub-Saharan Africa and South Asia.

The companies responsible for a big part of this success, off-grid or distributed energy companies, have also had their share of leaders and laggards. At least from a fundraising perspective, the industry has done fairly well, raising 600 million dollars in capital in the past two years, and projecting sustained sales growth to drive the sales of 740 million solar products alone by 2022. This is an encouragingly high number in light of the approximate billion people still disconnected globally today.

But money in isn’t always money out - and the worrisome elusiveness of profits among even the most highly valued off-grid energy companies and the persistent perplexities of Pay As You Go (PAYG) models have caused more than one investor to walk out on the deals infusing the industry with the lifeblood it needs to deliver on its earlier promises. 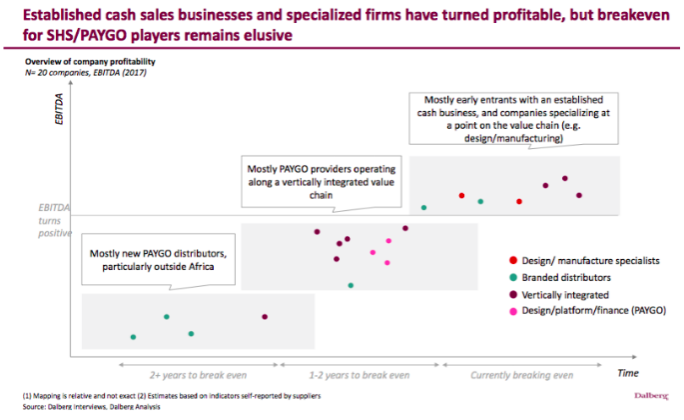 Interestingly, though not a single of the PAYG companies are amongs those achieving profitability in annual reports by industry associations, the vast majority of new investment in the off-grid sector has gone to these very PAYG companies. Of course, given the inherent challenges of the off-grid market, its relative immaturity, and the superior costs that come with PAYG’s enticing capabilities in securitization, this is not in and of itself surprising. It does, however, invite the question: which models can actually create truly sustainable value?

Upstream: How Smart Is Your A2E Money?

To give a quick sense of the money on the table, the off-grid solar market raised nearly a billion dollars in equity, debt and grants in the past half-decade with grants representing only 5 percent of this total (despite its outsized importance in early-stage financing). Social impact investors lead the lion’s share of investment over commercial lenders and development financiers, and some early savvy leaders have observed returns in the mid to high teens across a fairly even split of equity and debt. With north of another $1.5 billion committed through 2022, the pool of contenders for this cash is relatively concentrated, however: ~56 percent of the sector’s cumulative funding has been deployed into only four companies, and nearly 90 percent in the top ten. 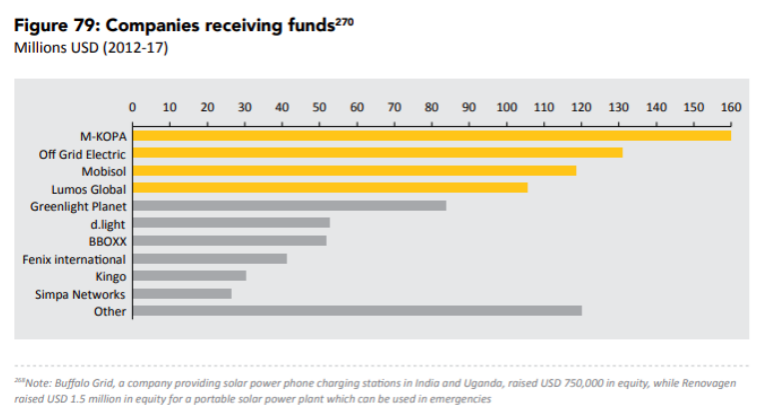 This is bad news for new entrants, particularly given that equity investments have dipped significantly subsequent to a painful realization of overvaluation and company restructuring in the early days of the industry between 2013 - 2016.

Fortunately, this leaves plenty of space for innovation: VentureBuilder, a new initiative by Catalyst Off-Grid Advisors and Open Capital described as a “blended finance development company", comes on the scene with a markedly bottom-up approach. Rather than pumping money into the well-heeled, often Western-headquartered Big Four or Ten, their strategy lies in identifying small but proven local players and providing appropriate capital with strategic and technical support - combining what is increasingly available off-the-shelf (like the services supplied by Angaza's software) with the local experience that can never be.

In another interesting development, the number of European utilities that have joined the fray has picked up from their first forays in 2016, with five major investment and acquisitions in India, Bangladesh, Mozambique and Togo reflecting a growing recognition of the breadth of the opportunities in lesser known markets from the likes of French national utility EDF, Italian Engie and Portuguese EDP.

Despite the challenges of valuing and evaluating at the frontier of energy access investing, not the least of which are novel performance metrics for PAYG companies, some companies are clearly attracting attention. These shifting sands will cause a shake-out, however, separating those with a vision for sustainable growth in expansion, and those with a pipe-dream.

The hardest part about selling products to the poor... is selling products to the poor. Adding to the difficulties of last-mile distribution to poor and expensive-to-reach customers, off-grid companies find themselves relatively pressed to demonstrate the social impacts of their businesses - and not only due to the significance of social impact investment to the sector’s funding. The extremely bullish picture of growth projected in the off-grid sector relies on several assumptions which have yet to be ironed out in the field.

One of the most important is the role that access to energy is expected to have on customers’ income, with the theory being that newly electrified households can save money on fuel costs, devote more hours to studying and working at night and generally improve their economic activity thanks to the myriad uses of electronic devices. This, in turn, will allegedly allow off-grid providers to ‘up-sell’ them additional products. And while reams of academic literature and empirical studies have shown that increased access to electricity has a substantial positive impact on lifestyle, there is a troubling equivocation on the question of if, when and how electrification results in higher incomes. 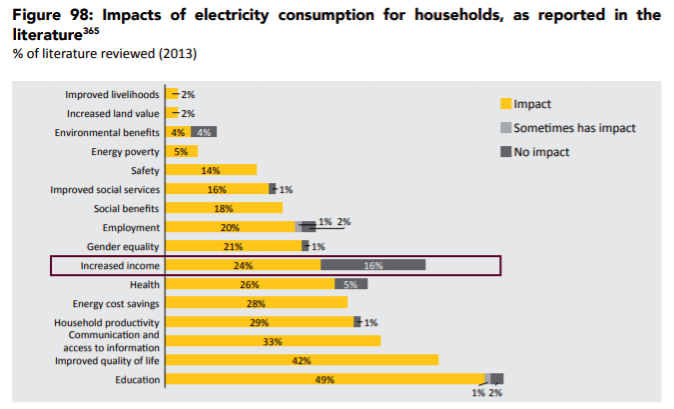 While academics and economists wrestle with randomized control trials and get existential about causality, some in the private sector are experimenting with targeting the mythical ‘productive use case,’ like Zola offering “business in a box” solutions targeting rural entrepreneurs, Mobisol with welding machines for small businesses, and a fast growing industry marketing energy efficient appliances with high potential for productive uses, like DC refrigerators.

For most in the industry, however, the marathon to profit takes a different approach: figure out how to give the people what they want now. The questions for off-grid companies articulating a long-term vision of sustainable growth, as well as for their investors, thus require well thought-out user roadmaps that reflect research and evidence about user behavior and wealth dynamics.

After all, has purchasing a television ever made you more productive or wealthy? To avoid the valuation burns of the equity bubble burst of the industry’s early days, off-grid companies and potential investors need to have a hard look at the assumptions driving cross- or up-selling additional services and appliances, and critically, an extremely honest conversation about customer repayment rates, both actual and projected.

“Companies are not overvalued. We simply don’t know how to value them.” Christopher Aidun, Persistent Energy Capital

In seeking returns from access to energy investments, investors should continue looking at macroeconomics and invest in companies in smart countries. Additionally, they should remain steadfast in looking for those that have long-term answers to the challenging trends defining the distinct challenges of each market - focusing on people, places and products.

For example, in geographies where customer acquisition costs skyrocket after the low-hanging fruit near urban markets saturate, where do you go? How sophisticated is your strategy for understanding, segmenting and reaching specific target demographics, such as higher-saving rural youth with mobile phones? And lastly, product-wise - what value do you ultimately bring to the end-user over the duration of the relationship, and how far does your vision go in addressing their evolving needs?

Behind these heady questions, however, the real grind takes places: sustained learning in operational execution, especially leveraging deep local knowledge, may be the single greatest addition to the strategic and financial decisions of the companies seeding the roots of digital infrastructure with the first tendrils of modern energy. And with the World Bank and IEA projecting rapid proliferation of higher-value solar home systems supporting enormous demand for power hungry appliances like smartphones, TVs and fridges, we should expect the unexpected for the maturing off-grid industry and the PAYG hybrids it unleashed.

Indeed, historical experience in the industrializing West reminds us that when it comes to the penetration of modern technological goods and appliances, it is the first step of electrification that takes the most time. Once that threshold is crossed, the digital floodgates open. In navigating the choppy waters towards profitability, then, perhaps the best advice for off-grid companies would be a reminder that no general ever won a battle without a plan, but no general ever won a war following that plan exactly.