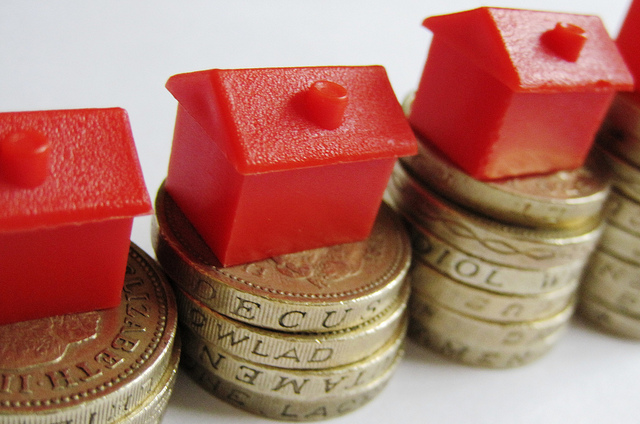 For many fintech entrants eager to capitalize on loan products, mortgages are the Moby-Dick of the lending sea. They are big, they are complicated and they are highly regulated. In North America, Europe and parts of Asia, the 'expeditions' of digital, non-bank originators appear to be increasingly successful as their market-share of the mortgage catch edges up. Banks, not keen to be docked at port, are also sharpening their digital harpoons, and digitizing large chunks of the mortgage process. And while the trials of advanced economies will become the map and compass to digitizing the mortgage, many emerging markets have not quite reached that stage of maturity - structures like the limited supply of affordable housing, messy land registries and the resistance of creditors in issuing long-term loans all stymie the retail mortgage market. Without a more vibrant mortgage market, there is little to digitize.

In North America and Europe, especially, the digital mortgage has surfaced and spouted water. In the wake of the financial crisis, loan profitability per mortgage has plummeted while a more fragmented market has inflamed competition (the top 20 originators accounted for only 53 percent of the American mortgage market in 2017, down from 87 percent in 2010). 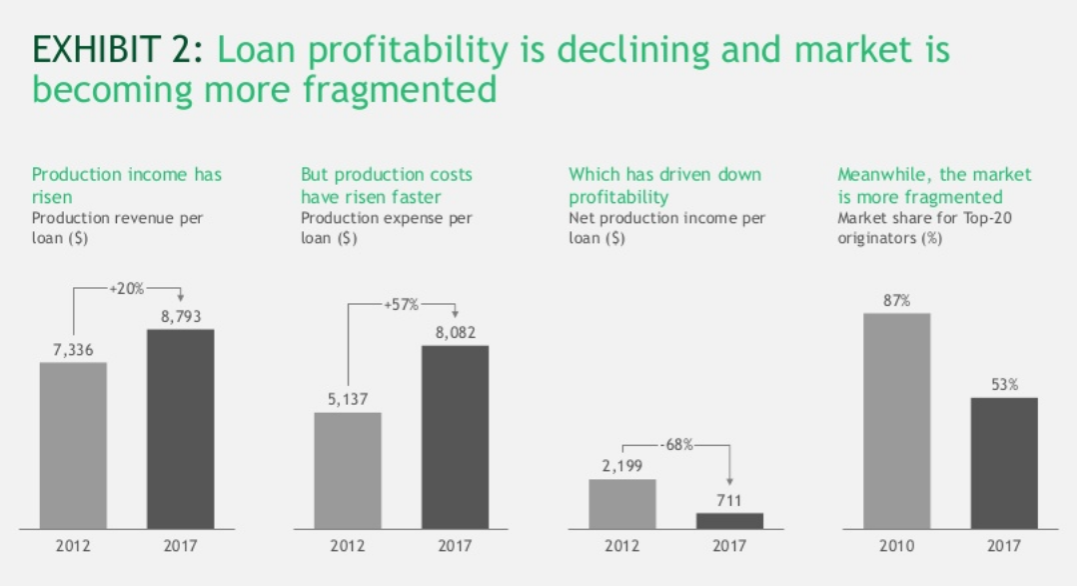 According to Boston Consulting Group (BCG), awareness over margin compression has lead most lenders, whether bank or non-bank, to proactively define a digital strategy to streamline the document-heavy, tedious mortgage cycle. Of little surprise, the application itself has been a point of focus and disruption. Of BCG's mortgage-financing clients, 60 percent have either already invested in a digital portal to manage an online application or have plans to do so in the interim future.

While fintechs specializing in mortgages built digital into their vessels' hulls (like Quicken Loans, Lenda, Better and Lending Home), white-label software solutions like Blend are allowing banks to retrofit their fleet. Bank of America unveiled a digital mortgage application service April of last year. Wells Fargo, the former market leader in mortgage lending before Quicken Loans snatched the title in Quarter 4 of 2017, was a bit slower to the punch and unrolled its equivalent product in July - with little time to spare. According to a survey by J.D. Power, the percentage of potential homeowners engaging with a digital front-end surged from 28 to 43 between 2016 and 2017.

And yet, the banks remain on choppy waters as they play catch-up. As of 2017, Quicken Loans could finally claim to be a 100 percent digital mortgage on both the front-end and the back-end. Through a partnership with eOriginal, the fintech now had the technological capacity to support eClosings, which involves the electronic signing of the promissory note.

This back-end innovation only became tenable once government supported enterprises, such as Fannie Mae and Freddie Mac, and Ginnie Mae (who purchase the newly-originated loans from fintechs, and sometimes, banks) modernized their own infrastructure. It was well-received news, for example, when Fannie Mae inaugurated its eVault, which allowed the secure management and storage of electronically signed assets. Digital coordination by stakeholders has set-off a proliferation of digital features and touch-points that both non-banks and banks are hungry to put out to sea. In fact, BCG identified as many as 46 services currently deployed digitally. 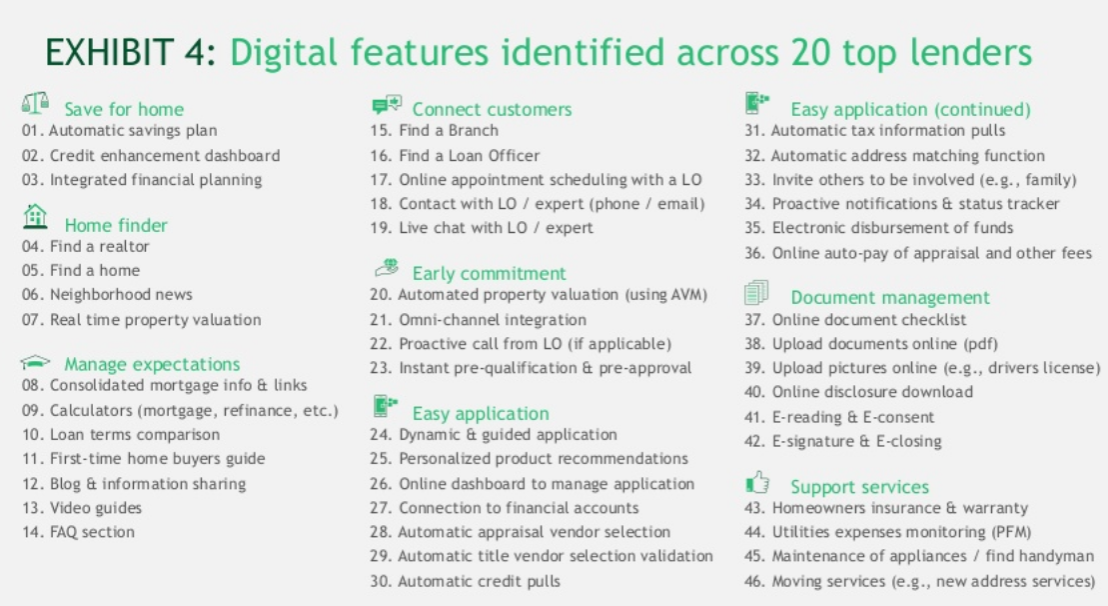 Unfortunately for banks, their brick-and-mortar roots, coupled with a model that has entrusted much of its operations to loan officers, have complicated the digitization of mortgages. Even with the introduction of online application portals, banks cannot offer instantaneous, online pre-approval. Instead, the candidates behind the online application are connected to a loan officer or broker. Industry sources described back-end mortgage processes at banks as messier than the front-end, and even harder to digitize.

"Treasury recognizes that the primary residential mortgage market has experienced a fundamental shift in composition since the financial crisis, as traditional deposit-based lender-servicers have ceded sizable market share to non-bank financial firms, with the latter now accounting for approximately half of new originations." U.S. Department of the Treasury, July 2018

As data published by the Treasury bears out, fintech alternatives are quite opportunely poaching the historical haul of banks. In 2017, non-bank providers financed 58 percent of the total residential mortgage market. In only a few short years, non-bank fintechs have mastered - and fundamentally altered - the art of reeling in the mortgage prize. 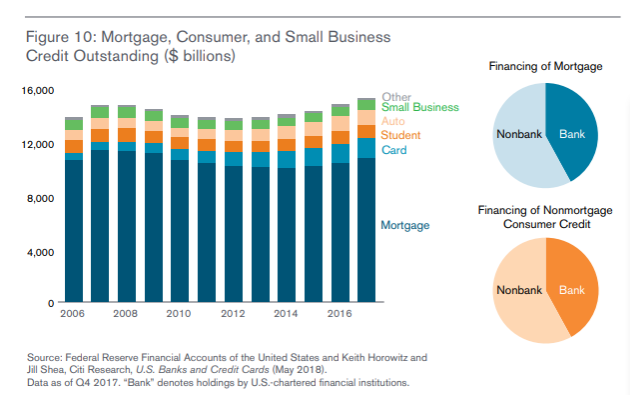 This trend has also seen traction across the pond. In the Netherlands, non-bank providers like MUNT and Dynamic Credit are responsible for 20 percent of new mortgage originations. In the United Kingdom, while banks are still the 'Spanish Armada' in absolute value terms, the growth in gross lending by lender type indicator (see below) signals that a similar upset to that of 1588 may be on the horizon. 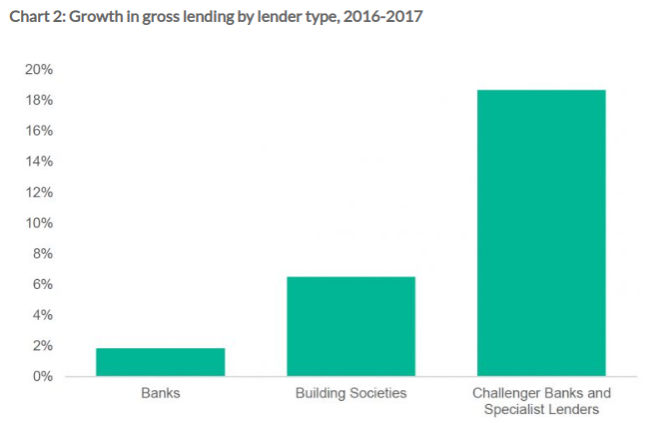 Regulators, of course, are wary of an overly zealous mortgage lending market in light of the 2008 housing crisis. It was with relief, then, that the New York Federal Reserve's 2018 study concluded that fintechs not only facilitate mortgage applications about 20 percent faster than other lenders, but experience fewer defaults.

Evidence over financial inclusion, however, was more shaky. Not only did the New York Federal Reserve find no backing that mortgage fintechs were targeting or serving marginalized borrowers, regressions run at University of Berkeley caught wind of discrimination. Minority borrowers (here, African Americans and Latinos) paid 5.3 percent more in interest at online mortgage sites than their white counterparts, an inconsequential improvement to the 5.6 percent premium incurred at traditional lenders.

In emerging economies like Africa, mobile phone innovation has precipitated a leapfrogging effect in financial services. Mortgages have thus far fallen to the wayside, as digital financial services tackle banking, insurance and remittances. In order for this to change, there are first material and regulatory realities to be addressed that hamper African housing finance generally.

As detailed by the Centre for Affordable Housing Finance in Africa's 2018 Yearbook, the dearth of affordable housing is perhaps the most significant obstacle to a lively, and more competitive, mortgage industry. In South Africa, only 34 percent of the urban population could afford the cheapest home unit available on the market by a private developer, appraised at USD$24,000. The lack of equity and savings by South African households for a deposit has motivated lenders to probe the resale market of government-subsidized housing, where properties might advertise for closer to USD$7,000. South Africa is not alone. As illuminated by the figure below, more than a dozen African countries are in direr straits, with less than 3 percent of the urban population able to bid on the cheapest home units. 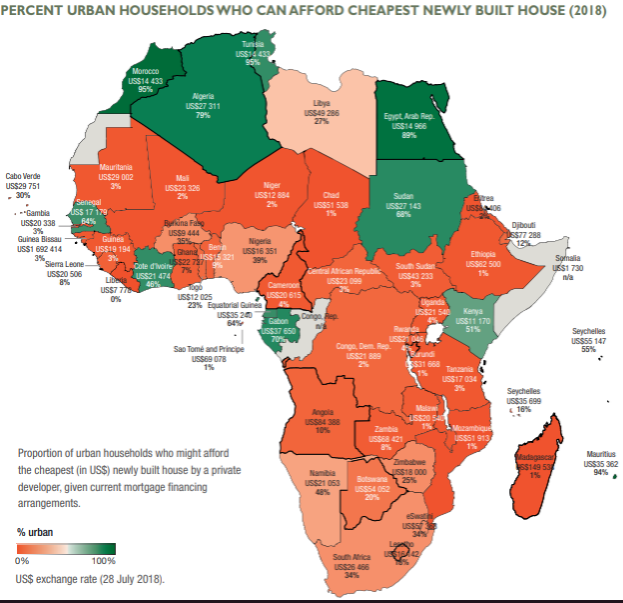 The obvious remedy is the production of smaller, more economical living structures. Unfortunately, certain prohibitive forces - namely the intricacies of land acquisition, registration and titling - do not necessarily render low-income housing development an attractive prospect. In some rarer cases, it is the land itself that constitutes the majority of overall land costs, such as in Nairobi. In Kampala, conversely, registration fees averaged 43 percent of total land costs. Costs aside, time (in Ghana, land registration can purportedly drag up to 3 years) and competing claims of land ownership stall movement. Without proper registration, land cannot be titled. Without a formal title, land cannot be secured and ultimately sold.

Land registries are one use case where blockchain's value-add is trying to transcend the theoretical. In Ghana, approximately 80 percent of land is under customary tenure, or joint ownership by families, clans or a chiefdom. Through a Memorandum of Understanding with the Ministry of Lands and Natural Resources, IBM intends to draft a white paper which will outline the feasibility of leveraging blockchain to populate a Ghanaian land registry, a welcome addition to Bitland's efforts. (Currently, data is so thin in Ghana around land ownership that property cannot be used as a collateral to access capital.) Similarly, the Zambian government contracted Overstock’s Medici Land Governance to assemble a blockchain land title registry.

Even with these plans in the pipeline, concrete gains would likely not materialize for years. Expanding access to finance at cheaper rates from development banks for the construction of low-income housing projects should be prioritized in the short-term. Additionally, the cost of finance for the retail market is also expensive, with consumers saddled with high interest rates and short repayment terms due to macroeconomic pressures.

The World Bank, with the intention of promoting institutional stability and reform, is collaborating with Central Banks in Egypt, Tanzania, Nigeria and West Africa to normalize mortgage liquidity facilities. These facilities try to guarantee long-term funding, thereby freeing retail mortgage lenders who no longer have to burden their borrowers with quick repayment schedules and high-interest rates to meet their own creditors' demands.

Until the mortgage-industry passes some of its own milestones in emerging economies, technology can only do so much. When that does happen, though, it will be exciting to see how African localization shapes underwriting risk, practices around property deeds and distribution. While regulation limits mobile money loans to a few hundred USD currently, the first mobile money mortgage will likely originate in Africa - an expedition of a different order.

Argentina: The Worst Of Times