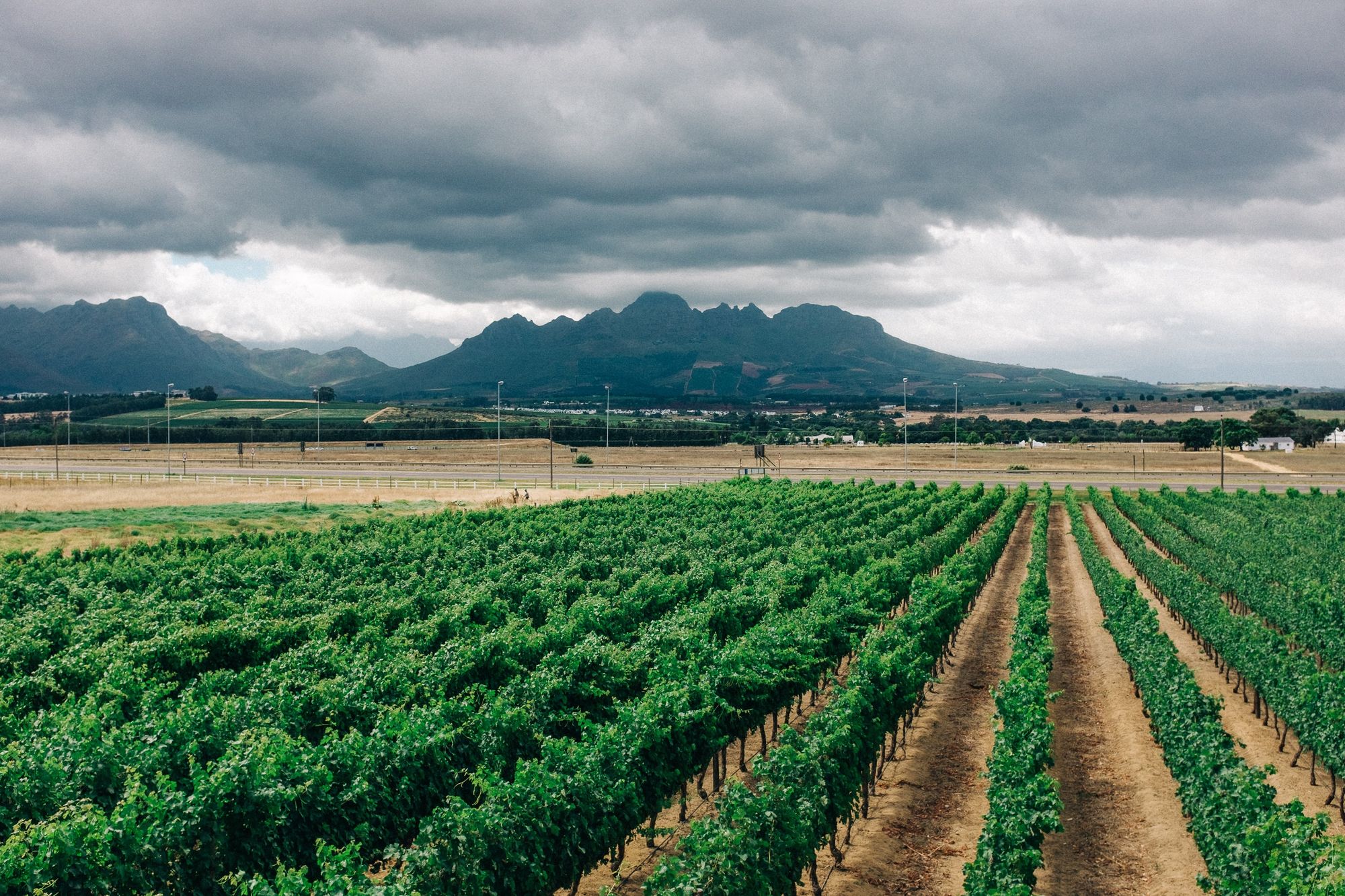 For far too long, the imaginary divide between rural and urban has proven more of a hindrance than a help for those aiming to expand access to digital finance and modern services beyond a given administrative or economic capital. In recent years, however, a revolution in geospatial technologies and methods has begun to uncover a truer picture of the continuum linking “edge” to “core” — a central question for banks, telcos, mobile money operators, ‘DevTechs’ and governments alike aiming to increase coverage or market penetration. In reviewing techniques for distinguishing the ‘here’ from the ‘there,’ this week’s Insight asks what is “rural,” really — and how might modern techniques for mapping place, space and time give an edge to those pushing the boundaries of service delivery at the “last mile.”

Population Growth of Cities (1950–2020) from Visual Capitalist on Vimeo.

Sometime in February 2008, the United Nations’ demographers and statisticians launched a provocative idea. By the end of that year, they announced, a young man or woman somewhere in Africa or Asia would put together the cost of an informal transport and leave their farm for the ‘big city.’ This move, made perhaps with trepidation but without fanfare, would mark the moment that humanity would finally become, in simple terms, majority urbanized.

Over a decade later, such categorical thinking persists in the collective consciousness, taking the form of an imaginary line around towns and cities demarcating the urban from the rural, the dense from the sparse, the noisy and polluted from the bucolic and placid. Such invisible lines may go unnoticed, but they are omnipresent in the ‘rural as residual’ approaches that dominate the delineation of 'city limits’ (population density measured by door-to-door census-taking? Furthest limit of 80% of commuters?).

“Currently, in most countries urban is defined first, making what is rural a residual of the remaining national territory. Nonetheless, the rural-as-residual-approach is often employed at the national level even though it creates a sensitivity to the criteria chosen for delineating what is urban.”
International Labour Office (ILO) 2018

But how useful has this rural-urban binary proven, and what has it obscured? Urbanists and sociologists have for decades noted that, fundamentally, the question of what is rural (and, inextricably, what is urban) has deeply political implications. These differences country to country have been extensively catalogued, yet while the basis for comparing what’s defined as rural in Nigeria (any town comprised of less than 20,000 individuals) to that of Kenya (towns comprised of less than 2,000 individuals) becomes increasingly unintelligible, the shift towards a more nuanced way of simply understanding where people are and how they live is slow going.

Recent innovations in geospatial technologies, however, driven by the space launch ride-sharing economy and the precipitous drop in satellite imagery processing costs, have fundamentally reoriented the level of detail at which to consider these questions. The implications are far reaching; what might a redrawing of boundaries imply for “rural electrification agencies” that have, as off-grid electrification has risen in importance, gained increased responsibility for promoting access to electricity that power everything from mobile phones to remote health clinics?

The question lends itself equally to the challenge of financial inclusion. Recent research in the International Journal of Applied Earth Observation and Geoinformation puts it succinctly:

“Financial Inclusion is, in many ways, a spatial planning issue: where do financial institutions provide services, how far do customers travel to access mobile money, which services are available where and how is agent cash-flow handled?”
Fibæk et al, 2021. “Geodata-driven approaches to financial inclusion – Addressing the challenge of proximity”

Researchers from Oxford Policy Management and the MasterCard Foundation make clear how important it is to move towards a more spatialized understanding of agent coverage for mobile money: agents were found to frequently cluster close to one another, often only several meters apart in urban contexts or along the same ‘hotspots’ along main roads in more remote regions. Growing the fleet of agents in such conditions costs money, yet it may do nothing to improve proximity to potential new customers — and thus access to financial services.

So what might be a better way to think about service delivery at the last mile if the urban-rural binary obscures more than it illuminates? Several approaches have gained purchase in recent years; recent innovations in using machine learning to recognize different roofing materials from satellite imagery have led to approaches focusing on built-up areas. 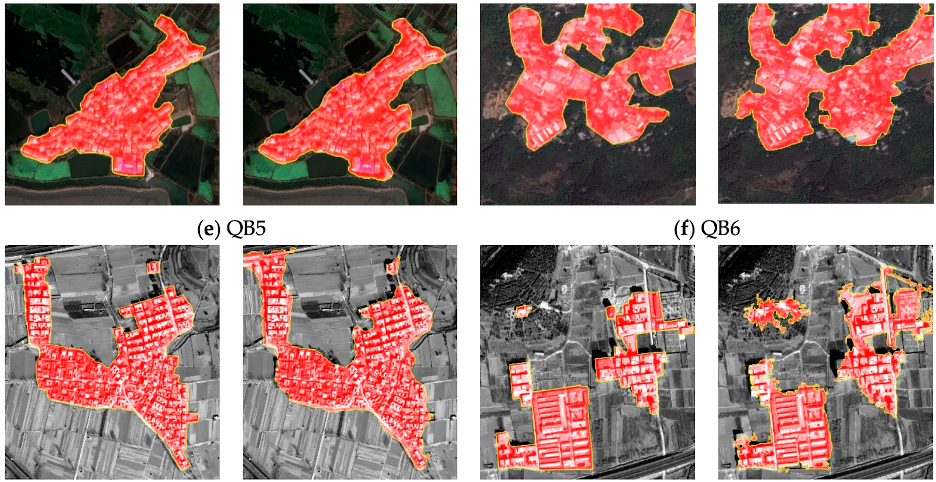 This has also yielded an explosion of techniques measuring wealth of populations across vast swathes of land at a higher sampling resolution and a fraction of the cost of the extensive ‘analog’ household surveys paid for by the World Bank every five years or so.

The Degree of Urbanization approach (recently cosigned by the UN Statistical Commission is another that aims to stretch out a globally comparable technique for mapping out the continuum between the urban and the rural, principally drawing on density metrics. A third is the Urban-Rural Catchment Area (URCA) approach, which addresses the fundamental issue that proximity may be a more ‘actionable’ indicator than anything else.

For example, if we know that access to financial services drops off quickly with distance from urbanized cores (the “proximity cliff-edge”), what is perhaps most important to understand is how close people are to such cores. Such an approach can then be paired with the appropriate demand-side metrics that contextualize ‘coverage’: a half-day’s walk, roughly 5-10 kilometers, for example, can be tested as a useful litmus to gauge financial inclusion coverage (defined, very specifically, as "worth it" for a family receiving a transfer of close to 25% of monthly consumption.)

Ditching simplistic categories of urban versus rural in favor of a more nuanced breakdown combining the ‘human dimensions’ of both space and time can thus be a much more practicable way of understanding how to design a market expansion or coverage densification strategy.

This finds particular weight in light of the growing recognition that the great trend of urbanization unfolds not just in the Cairos, Lagoses, or Delhis of the world — but in smaller, secondary cities whose size and importance have tended to be obscured by the urban premium privileged by the rural-urban binary.

Indeed, recategorizing demographics according to the ‘catchment’ approach reveals that in low-income countries, 64% of the population lives either in small cities and towns or within their catchment areas — suggesting that a big chunk of the ‘rural market’ is really more properly understood as ‘urban-proximate.’ 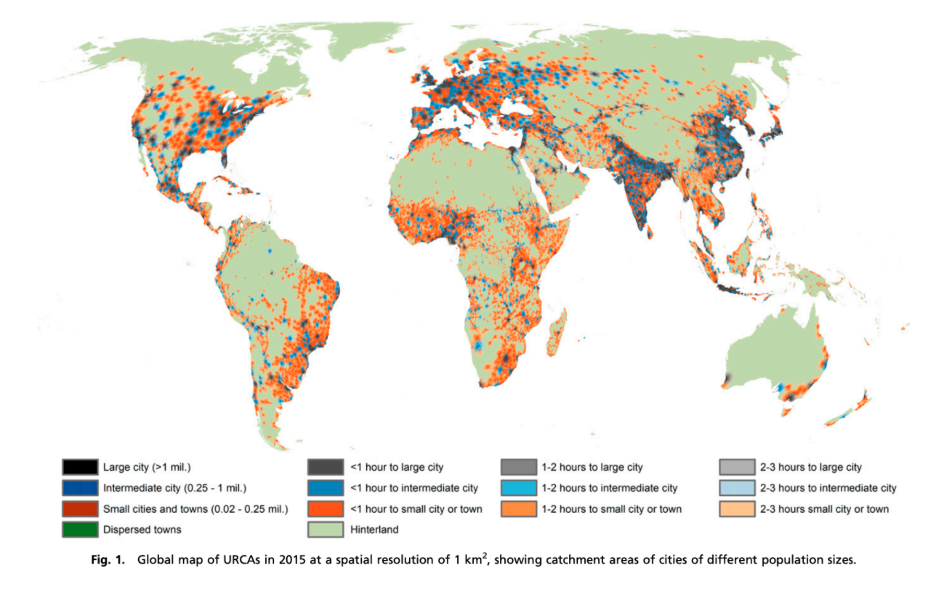 And yet still, the picture is incomplete. Greater and greater spatial resolution, whether at 1km resolution, 1 meter or (somewhat terrifyingly) lower still, only scratches the surface of the matrix between space and time. For how long do people stay where they are — and what direction are they even going?

Indeed, a more holistic understanding of where to build one’s branch or place one’s agent would not just yield a more granular picture of catchment areas, but also what kinds of people are doing the movement — and for what reason. A farmer hours away from the nearest trading town may increasingly spend nights on the outskirts of the capital to accumulate more non-farm income in cold hard cash; a third-generation urbanite may see the same outskirt as the perfect site for real estate investment on which to build his rental property. The same result — increasing population densification on the same patch of land — contains distinct challenges and opportunities for the urban planner and the entrepreneur alike.

Similarly, a better understanding of the flow of capital through mobile money could do much to illuminate what the unblinking satellites’ eyes can’t: if one could map the flows of mobile money within a country (an even more challenging landscape to assess than that of international remittance flows), one might be able to unlock invisible connections to the flow of people.

For example, while urban-to-rural remittance flows are undeniably important to rural livelihoods, it would be inaccurate to say that they are the only significant factors in a local mobile money ecosystem, or even the most significant. And while mobile money flows have been associated with a decrease in urban mobility in Uganda (attributed to a lower need to physically travel), one recent study found that increasing availability of mobile money in Mozambique actually appeared to accelerate rural-to-urban movements in facilitating the search for non-farm employment.

Henri Lefebvre, a sociologist contemporary of Sartre and Camus, is in many circles today considered the father of urban studies, but he began his intellectual career witnessing the transformation of remote Pyrenée mountain societies while in exile from the Vichy regime. One of his signal insights was that in the many contractions and expansions that societies undergo, the relationship between the agricultural and industrial is pivotal. 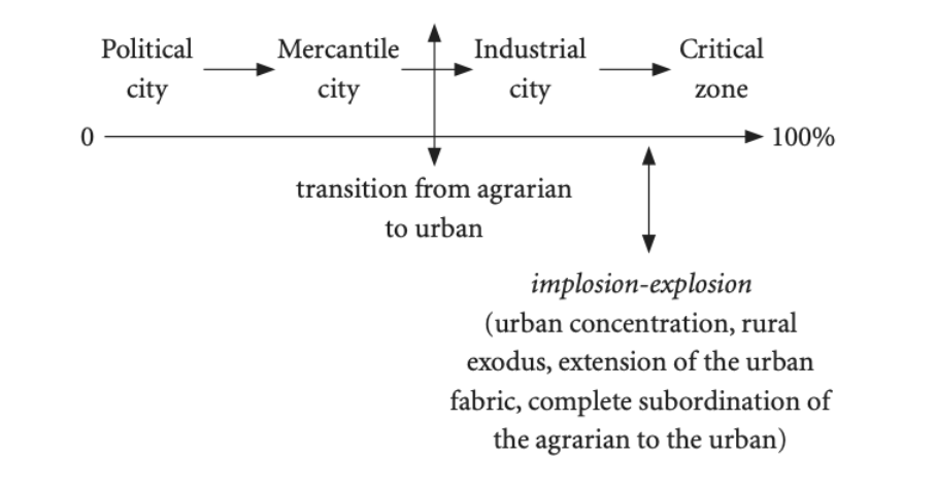 The material implications of this nexus are easy to bring into clearer focus: according to the Alliance for a Green Revolution in Africa (AGRA), approximately 80% of all food consumption in Africa is from purchases — not grown in one’s home farm — in an agri-food economy overwhelmingly dominated by ‘mom and pop’ enterprises distributed unevenly throughout an urban, peri-urban and rural constellation.

Dan Zook, Executive Director at ISF Advisors, reflects on the impact such nuance can yield in identifying and supporting rural transformation pathways with more 'human' dimensions of space and time factored in: “My first job out of college was with a microfinance outfit in Vietnam. I had somewhat of a lightbulb moment when it became quickly apparent that the local pig was a vastly more liquid store of value than a bank account, which could take hours of time and hassle simply to get to.” 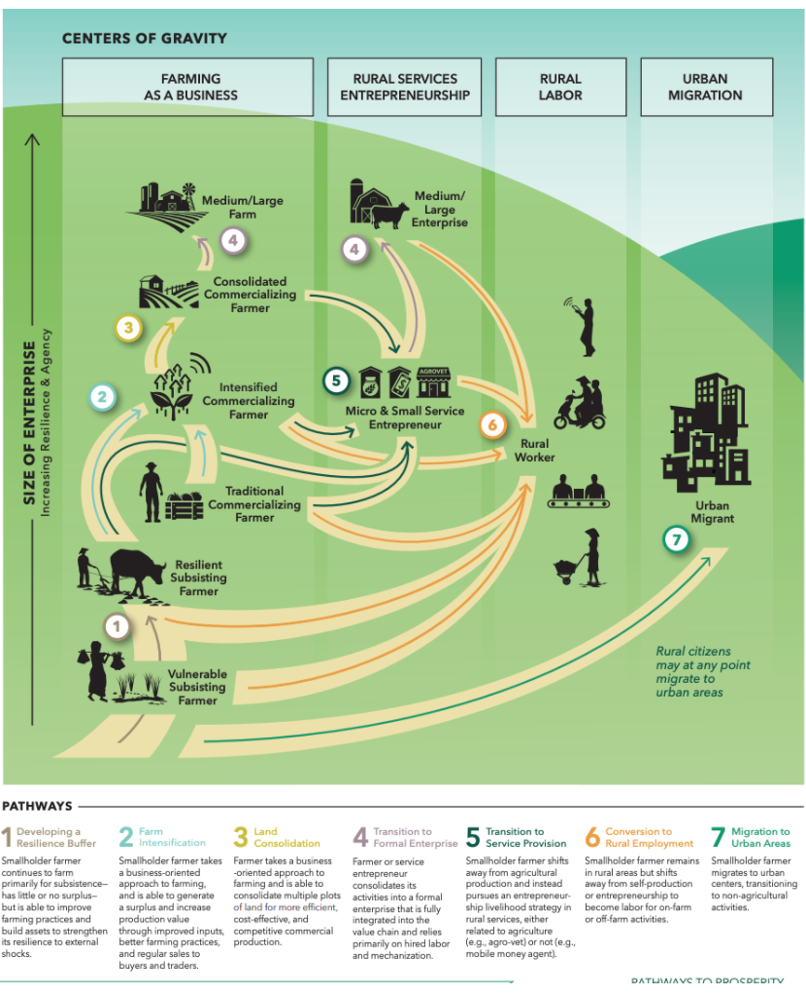 This anecdote reflects the spatial notion that the utility of wealth and its many stores changes as a function of location. Cash and its contenders, then, must be understood in their proper place: cash itself may hold more value than the number on its face, for example, in part due to its cultural and symbolic importance.

“If electronic payment systems are to replace currency objects, it would then be crucial to gain a better understanding of existing practices of stashing, retrieving, sharing, spending, and saving as a means of designing more inclusive mobile money systems that build upon (rather than substitute) existing financial practices and institutions.”
Institute for Money, Technology, & Financial Inclusion (IMFTFI), 2017

The nuances afforded by adopting explicitly spatialized approaches to financial inclusion may at first pass seem needlessly abstract, but such may be the unglamorous path towards progress. Thus, for those targeting the critical “midstream” of the food value chain — or the next supermarket branch placement, or universal vaccine distribution coverage — “re-spatializing” business-as-usual represents a pressing opportunity to get real about space.

Will Vaccine Passports Exclude or Enable?