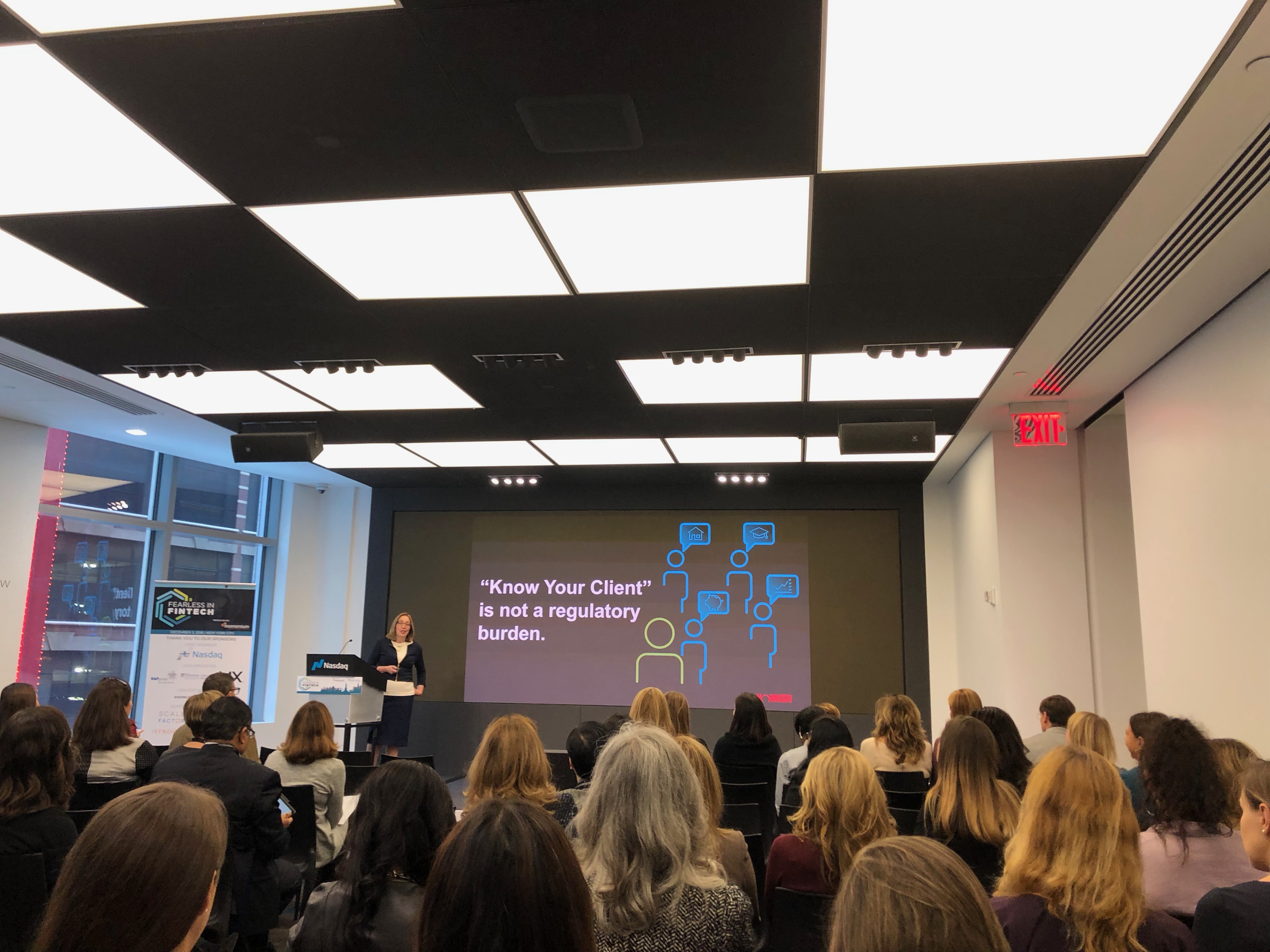 “Usually at a financial conference, the line for the women’s room is the shorter one.” - Overheard at Fearless in Fintech

Indeed, a jest made in good-fun to pass the time in the long ladies’ room line during this past Monday’s “Fearless in Fintech” event sadly epitomizes female representation from both the supply and demand sides of the financial industry. Perhaps most astonishingly, while the needle has moved in absolute terms, the gender gap in terms of relative account ownership hasn't budged, and has been firmly planted at 7 percent since 2011. Nearly 1 billion women remain unbanked globally.

There are a number of structural barriers (more on that to come) which inhibit women's full participation in financial services. In the absence of effective intervention from financial institutions or government bodies, there is space abound for a character to step in as the story's new protagonist. Could that be Fintech? Fintech startups have the opportunity to popularize, commercialize and institutionalize the idea of the financially empowered woman by widening her access to financial services and usurping the narrative over her self-perception.

First, let's get the facts straight. 72 percent of men worldwide have bank accounts in comparison to 65 percent of women. In developing countries, this seven-point gap expands to a nine-percentage point difference. The numbers for financial literacy are worse (for both parties). While only 35 percent of men are financially literate, women have an even poorer showing at 30 percent.

The strengthened financial inclusion of women - here defined as access to savings, loans, transfers and more through either a formal institution or mobile money provider - correlates to more independence, a reduction in female poverty and better control over their economic resources. Investments in financial literacy then ensure that products are appropriately and properly leveraged. Business case considerations for such initiatives are not far behind. Mastercard recently calculated that 80 percent of purchase decisions are at the discretion of women, while 75 percent of the world's wealth will be inherited by them in the next 20 years. Ignore women at your own peril.

In developing countries, obstacles to achieving meaningful gains for women in financial inclusion range from physical limitations to cultural ones. Physical barriers — like the distance to and from the bank branch — render usage difficult. This is compounded by a lack of agency in location choice. In thirty-one countries, women are predominantly excluded from the decision-making process of where domestic roots are laid. Physical barriers can be ameliorated by mobile money services, but a gap persists in mobile connectivity as well.

On average, women in developing countries are 26 percent less likely to use mobile internet and 33 percent less likely to use mobile money. Outright legal deterrents, encapsulated by 943 gendered policies spanning 173 international economies, are not only unsightly and discriminatory but impact female financial inclusion rates. In ten of those economies, acquiring identification is not equal-opportunity, and in two of them, women are explicitly barred from opening an account. Norms around sexism and misogyny are also often codified into the business practices and operations of financial entities. Should it be any surprise that women routinely feel discomfort when dealing with a male bank agent?

More Of The Same: Developed Economies

The supply and consumption of financial services by women, while still an issue, is less pronounced in developed economies. Instead, the fight has migrated to the gender imbalance of the workforce (especially in executive or management positions). Women hit the ceiling earlier and are passed over for men, in part due to the gender confidence gap.

The confidence gap demonstrates that men overestimate their abilities while women conversely underestimate their own. Due to this discrepancy, male interviewees are perceived as more confident in their capacities than female competitors, even when the female candidate has years more of experience under her belt. Women, too, engage in risk-averse behavior more often than men, and therefore require more data (ergo, sometimes more time) to arrive at an evidenced-based conclusion. A study by Lusgardi and Mitchell found that women will answer “I do not know” more frequently than men. Men, in contrast, will attempt to make an educated guess, even if they have little to no prior knowledge over a subject. 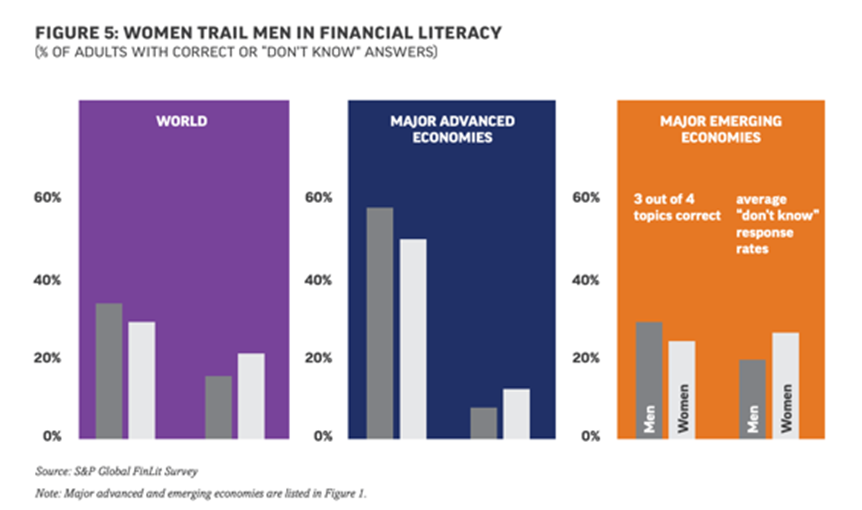 The financial inclusion gender gap is unfortunately perpetuated by industry leaders who have, at times, exploited the lack of financial literacy among their customer base. Dubious business practices usually manifest as add-on fees and obtuse pricing, and more often than not, the consumers conned are women. Financial institutions have also misused legal and cultural barriers to sideline women. In Zambia, historical cultural precedent insists that property documents are written in the husband’s name, yet some creditors require women to show proof of address in order to engage in financial activity.

Where Art Thou Government

Government-driven initiatives to eliminate the gender gap have been slow-moving and ineffective - but exceptions shine through. India is one of a handful countries that has seen significant changes in their previously-large gender gap, shrinking from twenty percentage-points to six percentage points between 2014 to 2017 (female account ownership jumped concurrently from 43 percent to 77 percent). India, however, has alarmingly high financial dormancy rates, thereby giving a false impression as to what those numbers actually communicate. Access does not necessarily translate to usage, and further strides in financial literacy appear to be needed not only in India, but in many other countries that witnessed rapid account ownership transformation.

Fintech To The Rescue?

If financial and governmental institutions are falling short, fintech should step up to use its platform as a means of educating and providing services to women. Fintech leaders need to be curating effective solutions to the gender gap problem. “Fearless in Fintech,” an event for leaders in financial services to discuss disruption using inclusive and innovative strategies, saw thought leaders proposing fintech solutions for changing the financial status quo.

Wendy Kearns of DWT sees the integration and collaboration of fintechs and financial institutions as the solution to spearhead widespread financial inclusion. Fintech has the power to disrupt the market and introduce ideas that can change the traditional mindset of incumbent financial institutions to provide greater and more meaningful access for women. In her opinion, while financial institutions do not have the same adaptability or appetite for risk as fintechs, fintechs startups lack the sway of a respected establishment figure. Therefore, partnership is the golden ticket.

Grameen Foundation’s President and CEO Steve Hollingworth emphasized the importance of conceptualizing these issues through a gendered lens. Understanding the barriers that women face worldwide is important for personalizing the strategy of expansion for financial services. Mr. Hollingworth added that it is crucial that fintechs understand the power relationships present in every woman’s life in order to better understand their access to financial services.

Fintech has the power to expand inclusivity in the professional sphere as well. Amy DeBerg of R&P Group encourages women to cherish their womanhood and use it to their advantage. She recommends that women take initiative in creating their own fintech startups, as anyone’s good idea today could be life-altering for others tomorrow. Amy noted that it takes special people to look toward the future with hope and passion, and those people should be (or at least not preclude) women.

“Use what you are to your advantage.” Amy DeBerg, R&P Group

The space between what exists and what should be in relation to financial inclusion is a perfect space for fintechs to work to close the gender gap and ensure equal access to financial services. Partnering with incumbent financial institutions and prioritizing the specific needs of women across markets will ensure fintechs’ success, even when shadowed by the legacy of where others have failed.

Mondato Summit Asia 2018: The Next Wave Of Digital Services In Emerging Asia