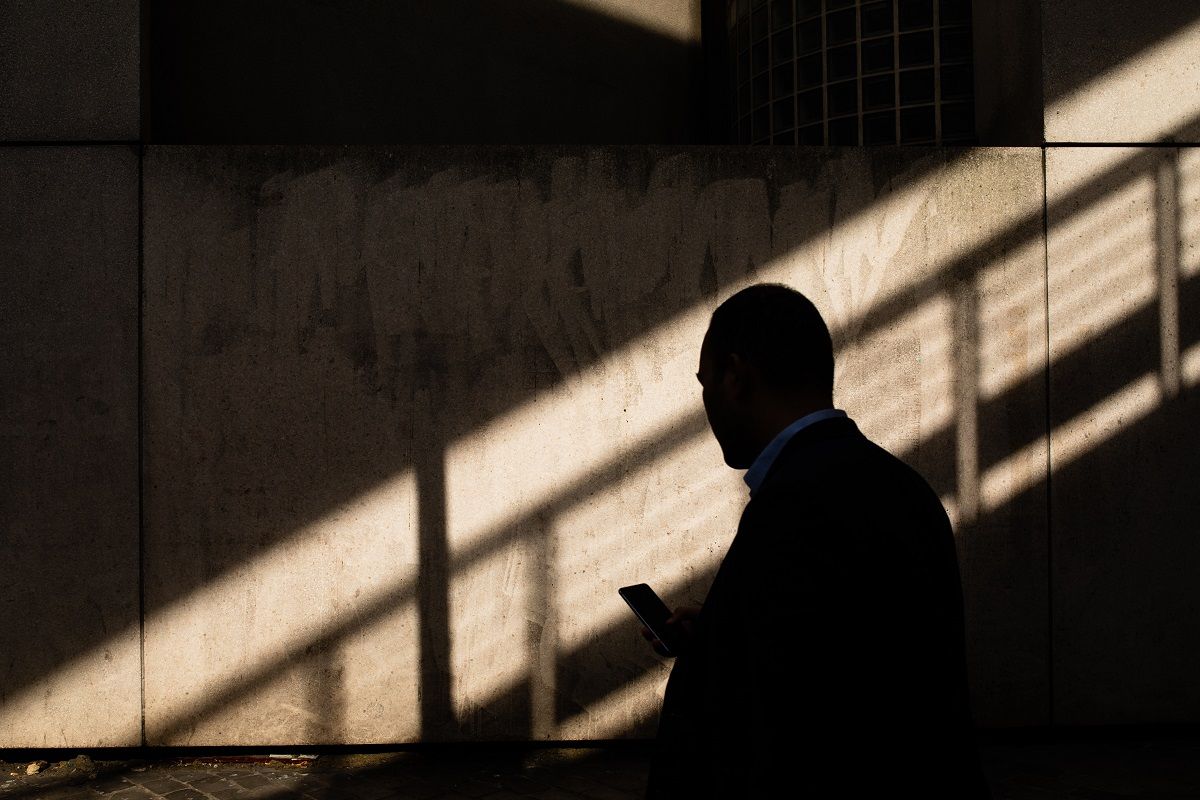 Last month, the World Bank issued some dire predictions about the remittance market crashing. But as the post-COVID picture comes into focus, things appear less cataclysmic, with the global remittance market possibly displaying more resilience than expected. At the same time, it is still early, and as countries around the world experiment with easing restrictions, the flow of money from sending countries could provide a signal insight into the true economic circumstances to come.

A Letter From Dakar

Last weekend, in Dakar, Senegal, Amadou Abdoulaye Ba received a notification on his phone. Like millions of others in the capital, he works in the informal economy, spending the equivalent of two to three dollars a day on meals for himself while saving everything he can to later send to his mother and wife in the northern region of Fouta. Despite the meager salary he earns as a night watchman for construction sites and residential buildings, he has an old but functional smartphone, recently bequeathed to him by a friend who has upgraded.

Amadou's mobile device proves critical to navigating the remittance process. He receives cash from abroad from an old friend concerned for his well-being amidst a pandemic. He, of course, knows of Western Union, but is wary of its cost. He is also reluctant to wait in line at a bank, as his employment is contingent on keeping a tight schedule.

He has never heard of WorldRemit or Wizall. These and other tech companies across the world are able to connect his friend’s debit card payment to cash-out points like the Total Station in Ouest Foire across the street from the construction site where he watches, works and sleeps. Amadou knows he can trust that the money will be there, and the sender is in turn comforted by full transparency throughout the remittance process. The entire exchange is complete in minutes. Amadou will subsequently initiate a domestic transfer to his own family.

Such direct transfers collectively constitute almost 10% of Senegal’s GDP. Whether these flows will hold or dip in response to the economic turmoil wrought by COVID-19 is a matter of utmost gravity for Amadou, his family, and billions of other across the world who rely on remittance providers to send, receive, and survive. Moreover, remittances often comprise significant portion of developing nations’ economies. As Mondato has previously explored, the P2P cross-border money transfer system eclipses official overseas development assistance by total volumes, and for the first time last year, foreign direct investment as well.

Enter the experts. As pandemic-countering lockdown orders shuttered economic activity to varying degrees across the planet over the first months of 2020, the World Bank warned of a projected (and sobering) 23.1% drop in global remittance flows to Africa (“the sharpest decline in recent history”) compounding an even greater 35% projected drop in foreign direct investment in the lower & middle-income countries comprising most of the African continent. 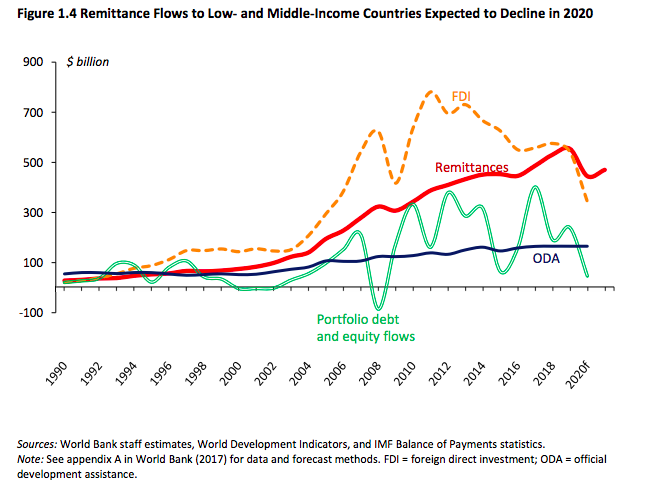 Predictably, this projection made waves, injecting renewed anxiety into accounts of the pandemic’s worst effects in Africa and painting a picture of devastation and catastrophe that risked overshadowing the reality of Africa’s relative weathering of the crisis on the whole thus far.

If these predictions are correct, then shrinking foreign aid budgets may indeed confront unprecedented tragedy unfolding on the world’s poorest continent as the world economy rebuilds. If, however, Africans the world over mostly carry the continent safely through the crisis, could this trigger an even stronger economic rebound as global capital chases recovery? 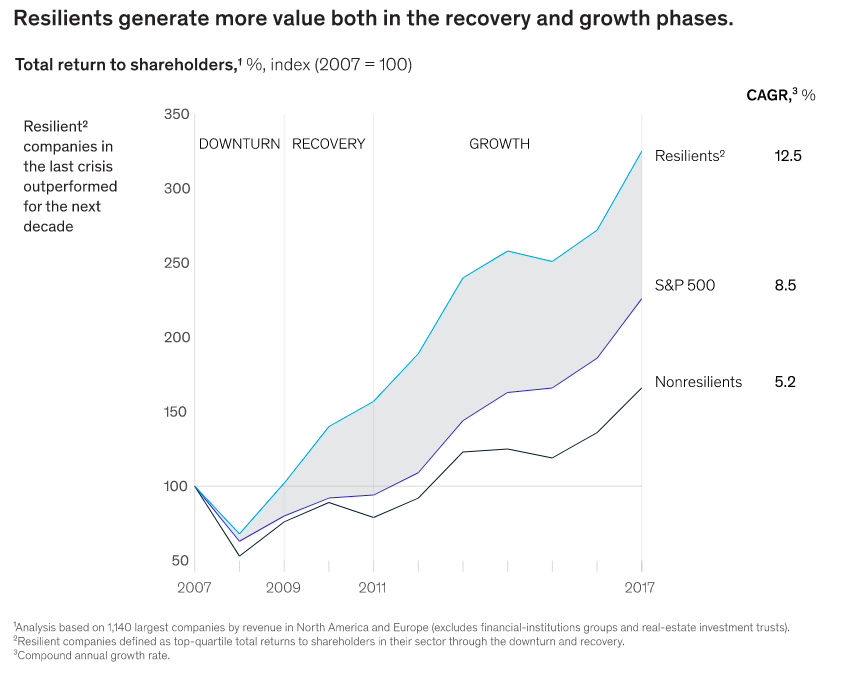 The Character Of Crisis

If the past is prologue, what can we learn from previous crises about the resilience of financial flows “back home”? Today’s economic crisis could resemble the Ebola pandemic which captured global headlines in 2014-2015, crossed with the 2007-2008 financial meltdown. Or it could look completely different. As economists fabulate on whether global and national recoveries might look like a U, V, or W, history tells us that crises impact different sectors of the economy differently - and in fact, routinely spawn unexpected ‘winners’ from the wreckage.

Let us recall that East Africa’s mobile money explosion, particularly in Kenya and Tanzania, owes much of its early success to some of the unexpected consequences of the 2007-2008 financial meltdown, and that emergency needs from the Ebola pandemic also reinforced the adoption of digital finance use-cases in affected countries.

This story appears to be repeating somewhat under COVID-19 on the continent - from Rwanda, where the number of mobile money transfers doubled in the week after lockdown was imposed, to Nigeria where the number of customers signing up to use Paga, the country’s most popular mobile wallet, has reportedly seen a more than 300% increase over the previous quarter. Mobile money, it would appear, is exhibiting signs of ‘anti-fragility’, becoming more widespread and ubiquitous with each shock to the financial system.

Too Remit To Quit

Amidst the unprecedented uncertainty - and misinformation - surrounding COVID-19, what is clear is that if the remittance market will tank, it hasn't happened yet. On the contrary, the flows of P2P transfers cross-border seem to exhibit several notable upticks, creating room for cautious optimism not just for established operators (e.g. Western Union, MoneyGram, Ria) and Fintech challengers (e.g. WorldRemit, Remitly, and a bevvy of regional corridor specialists), but for the millions of recipients who depend on their services.

Andrew Stewart, managing director of WorldRemit’s Middle East and Africa division, reflects on the dynamism the industry has witnessed over the past months, pointing to an across-the-board increase of about 150% in customer activation across all payout types for the firm. He notes in particular the effect that lockdowns have had on the channel mix, with a strong rebalancing towards digital vis-a-vis cash on the payout side.

“April was a telling month for the industry, but with solid growth in new customers for both April and May we witnessed a step-change towards digital, the outlook is positive and bodes well for continued revenue growth.”
Andrew Stewart, Managing Director for Middle East & Africa, WorldRemit

Meanwhile, despite an increase in account registration and a rebalancing towards digital, the average transfer value does seem to have shrunk, in line with some predictions. But the frequency of transfers, as well as the number of recipients, has offset this dip, noted Stewart. “The net is widening. Whereas a sender typically sent money to one or two recipients, the number of receiving individuals for a given sender has increased on average.”

Even within this more nuanced picture of the pandemic’s impact on remittances, regional differences are pronounced, accentuated by the diversity in official responses to the pandemic as well as by the structure of each of the continent’s national economies.

In the high-volume Southern African corridors, for example, Zimbabwe and Malawi are still very cash-driven, whereas Lesotho and Mozambique exhibit greater enthusiasm for digital. For countries whose lockdowns are either light or unevenly enforced - including Zimbabwe and Malawi, and to an extent Botswana and the Democratic Republic of the Congo - the swing to digital may be less pronounced. 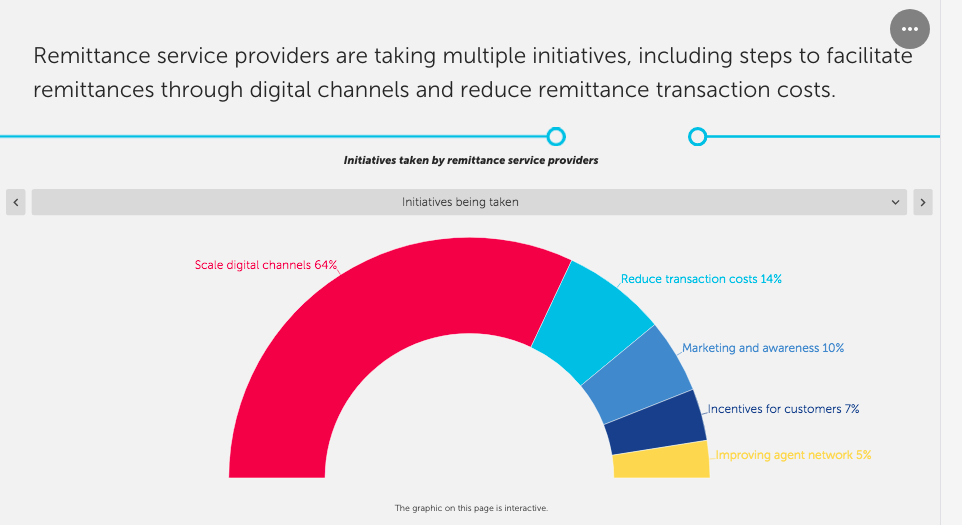 Even in these cash-loving countries, where high volumes of Africa-to-Africa flows mirror the linkages of SADC migrant workers, the resilience of remittance flows is notable. Oliver O’Brien, Head of Strategy and Business Development at Mukuru, the largest remittance operator in Southern Africa, remarked that most of the company’s customers: are in the informal sector; send the equivalent of 50-100 USD per month; and have maintained a mostly steady flow back to their homes.

“Some of our corridors have seen impressive growth, a real testament to the hard-working nature of our customer base. We have also seen an increase in new customers, driven by our ability to assist typically financially excluded migrant workers who, prior to the impact of lockdown measures, relied on informal remittance providers to send money home.”
Oliver O'Brien, Head of Strategy & Business Development, Mukuru

He noted that while the crisis entails additional operational costs (mostly to maintain service reliability and cash availability for operators), the overall picture is one of ingenuity, flexibility and willingness to collaborate between various partner companies and governments in response to common challenges. One new Mukuru offering that has seen significant uptake among senders to Zimbabwe, for example, is the ability for recipients to collect a basket of grocery items back home, enabling them to stretch the value of their remittance that much further.

A Bridge Over All Borders

It is important to note that with predictions of the pandemic’s long term impacts looming, we are still in the very early stages of the global response. At the same time, the resilience of the remittance market at this point in time does provide some degree of insight into the state of diaspora communities and their beneficiaries under the crisis - within and beyond Africa.

In the United States, for example, it should come as no surprise that the pandemic has given digital finance tools like PayPal a “tremendous surge.” But less intuitive is the fact that remittances from the US to Mexico - one of the highest-volume corridors in the world - reached a record high in early 2020, a 35.8% increase over March 2019. Given that it occurred against predictions by BBVA analysts that migrant remittances to Mexico could fall as much as 21% because of stay-at-home orders and record unemployment in the U.S., data points like this one are worth a second look.

One reason for the tenacity of remittances is the strong family ties which bind migrants to their home communities. But this also partly reflects the under-appreciated value that immigrants bring to their host countries. In the US, for example, researchers note that one driver of Mexican immigrants’ unceasing remittances is the fact that immigrants are disproportionately performing “essential services”. These individuals are keeping the economy functioning even while much of the rest of the economy may be sheltered-in-place, and so are still enjoying enough revenue to remit back home, same as before.

Another reason may simply be the crisis of necessity. Researchers from the Swiss Finance Institute published a report recently detailing a “statistically and economically significant” increase in the download of digital finance applications for mobile across 74 countries representing each region of the world:

“We estimate that the spread of COVID-19 and related government lockdowns have led to between a 24 and 32 percent increase in the relative rate of daily downloads... In absolute terms, and accounting for the average number of days since confirmed cases or lockdowns in our sample, this equates to an aggregate increase of about 316 million app downloads since the pandemic’s outbreak.”
Dr. Jonathan Fu & Mrinal Mishra, University of Zurich

That the pandemic would invigorate interest in digital finance should not surprise anyone, given the social and physical distancing restrictions they brought on. And yet, with the true impact of the pandemic on developing countries’ economies unclear, the resilience and stalwart efficacy of the remittance sector represents perhaps one of the most clear-cut arguments in favor of renewed attention to facilitating direct payments to those in need at a time when global institutions are struggling to meet the moment.

As of yet, the dire projections of a crash in the global remittance market have not materialized. As we collectively envision what a global economy could - or should - look like in a moment wracked with uncertainty and rife with clashing, contradictory perspectives, it is worth recognizing that the story of human resilience and nation-building is inextricable from that of migration.

The transfer received by Amadou Ba last weekend would have been impossible just a few years ago. It attests to both the social cohesion that can transcend national borders and the ingenuity of the technology that bridges them. Predicting the future is tricky business, but if the global community manages to coordinate towards the goal of reducing transaction costs for international transfers like these, it will be banking on what is perhaps its most enduring assets - the resilience of its relationships.