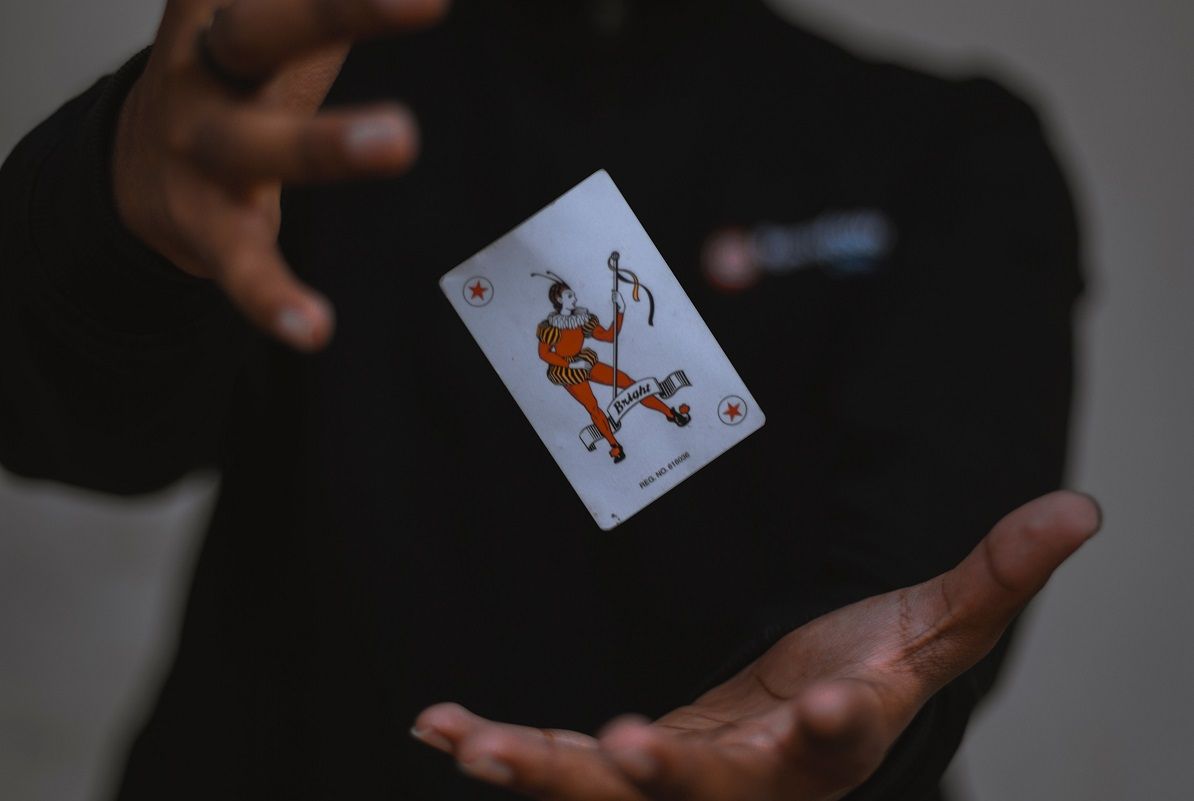 For some, fintech’s association with financial inclusion and better financial health for users is a foregone conclusion. As the World Bank defines it, financial inclusion “means that individuals and businesses have access to useful and affordable financial products and services that meet their needs – transactions, payments, savings, credit and insurance – delivered in a responsible and sustainable way.” From 2011 to 2017, an astounding 1.2 billion adults obtained a financial account, a common marker for financial inclusion, most prominently in Sub-Saharan Africa but also in areas like India and Southeast Asia.

Fintech’s model country, invariably, is Kenya. A populous country boasting high mobile phone usage but at the same time exhibiting low levels of formal financial inclusion, Kenya was ripe for a financial tech revolution – and under the confines of a light-touch regulatory regime, it happened. Ignited by M-Pesa (which launched in 2007 to become the most successful mobile-based financial service in the developing world) and fueled by a subsequent proliferation of other digital financial service providers, Kenya’s financial sector tripled its financial inclusion levels over 13 years to 83% of the population.

But are these new financial tools — and the supposed inclusion that comes with them — actually bringing about the user outcomes they promised? Even in a success story like Kenya, the verdict isn’t completely one-sided.

Beneath A Successful Surface

That’s not to diminish fintech’s accomplishments — a healthy amount of literature and studies support fintech’s drive towards financial inclusion. Fintech tools like mobile money offer the poor and rural the opportunity to access and secure money where traditional methods have come up short, both delivery- and cost-wise. With improved savings tools, people can save for large investments or purchases, and are better equipped to weather economic shocks.

“These financial technology tools have been incredibly useful for expanding financial inclusion. But certainly, they have created new challenges as well.”
Thorsten Beck, professor of banking and finance, Cass Business School 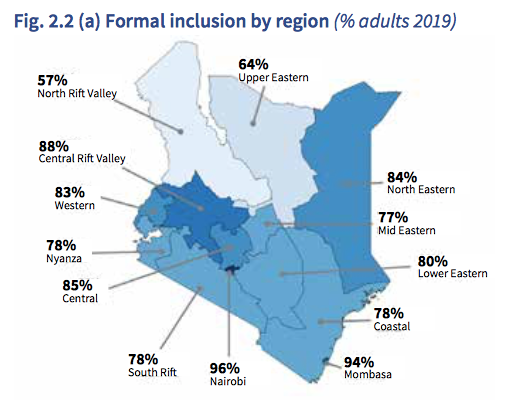 All the positive signs notwithstanding, an emphasis on financial inclusion sometimes fails to ask how much these new financial tools are actually impacting financial health – meaning the state of one’s personal financial situation, which depends on factors such as savings, ability to cope with economic shocks, debt levels, and insurance. FSD Kenya’s July report probed deeper to survey not simply levels of financial inclusion, but financial health and behavior in the country. The picture drawn does not show a completely triumphant financial tech sector, but one that is supplanting traditional financial solutions for Kenyans in certain cases.

But despite real increases in financial inclusion, only 22% of Kenyan adults were classified in 2019 as financially healthy, compared to 39% in 2016. Obviously, the financial health of Kenya’s population is determined not just by financial inclusion, butalso by influences like general socioeconomic conditions (Kenya’s economy slumped in 2017 when its agricultural and manufacturing industries struggled amidst a severe drought and a rise in the prices of goods) and access to public services. But the precipitous worsening of the general financial health of Kenyan adults during the same three years that saw strong financial inclusion indicators raises questions about the durability of fintech’s benefits.

How Kenyans are using the available array of financial tools offers a key clue to financial inclusion’s real impact. For use cases where digital methods show clear superiority over traditional methods – like remittances or paying bills – the data aligns clearly in favor of formal solutions. Incomes are still received in cash, but that is changing, too. When it comes to daily transactions in Kenya, however, 98% are still transacted in cash. One factor is the slab-based system of pricing applied by mobile money providers like M-Pesa, which extracts a higher fees, in terms of %, from smaller transactions than from larger ones. 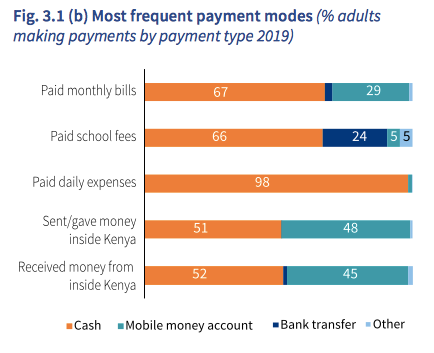 Arising after last decade’s financial crisis, fintech hasn’t had to deal with a broader downturn in the economy, and it’s uncertain whether newly-included groups in Kenya are well prepared for such an event. A recently released Africa Long-Term Finance scorecard found that Africans lack access to long-term credit, and with Kenya’s economy worsening in 2017, FSD Kenya’s discouraging figures does not offer promising evidence if that would be the case.

Digital credit, in fact, is possibly a dangerous tool for the previously unbanked in such instances, especially in the largely unregulated landscape it finds itself in. FSD Kenya found that two-thirds of Kenyan borrowers exhibited at least two signs of debt stress. With increased levels of debt stress, Kenyans shifted to relying on shopkeeper credit, which shot up from 10% in 2016 to 29% in in 2019, and 45% of these Kenyans wound up defaulting on their loans. Though digital loans were sometimes found to be used in emergencies, in general they weren’t being used for investments and business ventures as hoped, but rather for consumption purposes; in other words, they are not currently serving as a substitute for traditional sources of credit, but a supplement.

Digital credit woes aside, digital finance tools do still offer some help in times of economic crisis, allowing family members to send and receive money, as well as to build savings. But if the growth of digital loans corresponds with an overall increase in debt, especially among the poor, wide swaths of the population could face devastating consequence in the event of a deeper economic depression. As Mondato has covered before, many of these digital credit products are criticized for a lack of transparency, data privacy issues, and predatory interest rates. The light-touch regulatory approach championed by Kenya has reaped certain rewards, but credit is a greater regulatory challenge than mere savings when people’s financial standing is put at risk.

“If you try to regulate interest rates, you will have less products and availability. But if you don’t have regulation, you will have people getting stuck in debt cycles. It’s a tricky situation.”
Jason Blechman, Advisory Lawyer

The myriad problems with digital loans raise deeper questions getting to the heart of fintech's real-world effects. Is it possible, for example, for a fintech endeavor to sustainably and ethically earn revenue on expanded services to the bottom of the pyramid?

Though logical for any venture interested in long-term sustainability and success, this approach turns its back on the most financially excluded in terms of income, distance, and infrastructure. From the top, fintech enterprises creep down the social class pyramid in emerging markets until they reach the point of unprofitability. One Ey Report suggests that $200 billion in banking revenues in 60 emerging markets remain financially excluded due to unprofitability. In a January 2019 blog post, CGAP CEO Greta Bull described hearing “financial inclusion” used cavalierly at fintech events, but rarely hearing mention of “the poor.”

“The economics around serving the poor remain vexing. While it is quite clear that fintech is going to challenge existing models of financial services delivery, it is not yet clear to me that these new players have completely cracked the cost dynamics of serving the poor.”
Greta Bull, CEO of CGAP

Competition led by M-Pesa has driven fees down to affordable levels for many, but the cost of running a financial account was cited in FSD Kenya's report by 57% of nonusers as the reason for not using a mobile money account. The regressive slab-based pricing system likely plays a role, but the main outstanding issue is that solutions for those most in need will come - if profit-seeking is the driver - dead last. In the eyes of Thorsten Beck, these financial tools aren’t particularly suited for the very bottom 10% — but in their case, financial inclusion isn’t necessarily the most pressing issue, anyways.

“This has been a big challenge in the sense of how to move from pure transaction services to other financial services. That third [of Kenyans who use only mobile wallets], that’s better than before. The question is what products can we develop for people who only have their mobile wallets to expand their range. A mix of market-based and NGO-based solutions would help develop that landscape.” –
Thorsten Beck, professor of banking and finance, Cass Business School

As elsewhere, the fintech revolution is still progressing in Kenya. Smartphones are spreading rapidly, and bringing advanced financial tools along for the ride. Financial inclusion levels are rising. In some ways, the problematic data points from Kenya are symptoms of fintech’s decade-long growing pains. As more countries seek to replicate Kenya’s model, they would be wise to either mitigate or brace for the issues like debt, improper use cases, and mobile wallet overreliance that Kenya is dealing with following the earlier stages of the digital finance revolution. When Kenya’s formally-included poor are chronically falling into debt and three quarters of a largely included population is not financially healthy, it serves as a cold reminder of what these financial technology tools are: tools. In developing markets with vast income inequality and disruption, the environment is often fraught, and the recipients of these tools may not be equipped to use them.

Will Banks Lead the Fintech Charge?

Removing The Risk From Bank-Fintech Partnerships