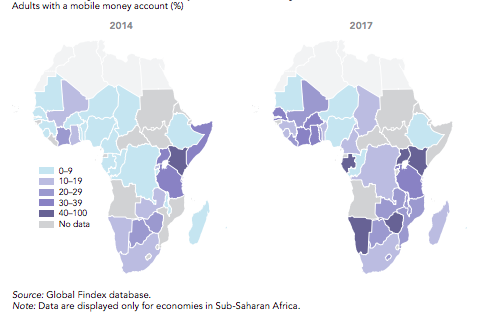 When the World Bank's 2014 Global Findex numbers were published, the banner headline figures announced a 700 million person reduction in the number of people financially excluded in just three years. Scratching the surface, however, revealed enormous regional variations in the levels of success that had been attained, with four of the five mobile money (MM) superstars being located in East Africa. Côte d'Ivoire made up the numbers and flew the flag for West Africa, joining Kenya, Tanzania, Uganda and Somalia at the MM top table of countries with more m-wallets than bank accounts. A second tier of eight countries also emerged, where at least 10 percent of the population had a MM account.

Fast forward to 2017 and top-flight success is now measured in terms of the countries in which over 40 percent of the population only has a mobile money account (account ownership at a traditional financial institution (FI) has flatlined in the interim). Somalia is absent from this list as there was no data available for it in 2017, and the top flight of countries where over 40 percent of the population has a mobile money account now consists of Kenya and Uganda joined by Zimbabwe, Namibia and Gabon.

But bunched below this diverse group is a cluster that includes Côte d'Ivoire, Burkina Faso, Senegal, Ghana and Tanzania, highlighting not only the increased geographic spread of mobile money's success, but also a linguistic one: three of the four west African countries are francophone. Perhaps this will signal the end of the anglophone/East-African focus of many development and investment partners, and an improved awareness of the opportunities presented by the growing economies and healthy MM ecosystems that exist beyond the headline-worthy English speakers of "Silicon Savannah" and its ilk.

In reviewing the arising trends from the dataset, one of the areas emphasized by the World Bank team that compiled it is the ongoing problem of gender imbalance in financial inclusion. Simply put, in most countries (including those that have made good progress in extending financial inclusion), there is a significant gap between the numbers of men and women in these countries who have access to banking or digital financial services. Pakistan and Bangladesh, in particular, came in for criticism. Barely 7 percent of women in Pakistan are banked, while in Bangladesh, between 2014 and 2017, the financial inclusion gender gap grew from 9 to 29 percentage points. Globally, this gap remained constant at 7 percentage points.

As for Sub-Saharan Africa's financial inclusion and DFS success stories, the results were varied, although all eight posted a gender gap above the global average of 7 percentage points. For the region's MM powerhouses, only Tanzania recorded a notable decline in its gender gap, from 11.8 to 10.9 percentage points, which remains above the global average, and substantially greater than the SSA average.

While the gender gap in Kenya and Côte d'Ivoire stayed steady or marked only a small increase (<0.5 percent), the most dramatic increases were observed in those countries that made some of the largest improvements in their mobile money account ownership numbers: the gap increased in Senegal, Uganda, Gabon and Ghana by 2.5 to 4.1 percent. Outside of this region, among the other markets with relatively wide MM usage, Zimbabwe's gender gap is 5 percentage points, while Namibia's is a credible 3 percentage points.

Other countries in SSA that have a notably below average MM gender gap that include Cameroon, Malawi, Liberia, Sierra Leone and Zambia. And although mobile money has historically struggled to take in the region's wealthiest economy, South Africa, its users have a gender gap of less than 1 percentage point, while in Madagascar it is so small as to be a statistical error (0.2 percentage points). In almost all relevant markets the gender gap was equal or greater for bank accounts than for mobile money accounts, and even in outliers such as Uganda the difference was no more than 4 percentage points.

Much of the discussion of the Findex results has, quite properly, centered around the gender gap and what can be done to narrow it. And while each individual country has its own regulatory environment, mobile ecosystem and cultural, political and economic system, the experience of Senegal and Burkina Faso has the potential to provide fruitful insights into how two countries in an economic and monetary union (the subject of a previous Mondato Insight) have managed to produce such divergent stories regarding gender and financial inclusion over a short period of intense sectoral growth.

The Elephant In The Room

At the other end of the scale, though, the West African elephant in the room in all of this is, in more ways than one, Nigeria. The largest country in Africa in terms of population, like other regional giants around the world, it has often opted to chart its own independent path, buoyed up by the sheer numbers of its own people. So too with mobile money, where the government of Nigeria has adopted a regulatory regime that often seems designed more to keep out foreign telcos and mobile money deployments than it does to promote the mobile channel as a path to financial inclusion. And while native Nigerian players such as Paga have generated a name for themselves, the broader financial inclusion drive in the country (which aims for 80 percent financial inclusion in the country by 2020) seems to be falling short. So much so, in fact, that the proportion of financially included Nigerians has actually fallen from 44.4 to 39.4 percent.

Admittedly, mobile money accounts more than doubled, from 2.3 percent to 5.6 percent of the population, but that still leaves the country trailing even neighbor Niger in absolute MM accounts. In the meantime, account ownership at formal financial institutions (FI) actually declined, leaving fewer than 40 percent of Nigerians with bank accounts. By way of comparison, this is a lower figure than in Ghana, where just three years ago barely a third of Ghanaians had an account at an FI and now over 40 percent do, while 39 percent now have a mobile money account.

Nigeria's attempts to institute Anti-Money Laundering measures via the introduction of a Bank Verification Number scheme likely played a major role in the decline in FI account holders in the country, but given the overall West African and SSA context in which mobile wallets are booming in many, many instances, this was a scenario in which a healthy mobile money ecosystem would easily have been able to pick up the slack. It did not. And more disappointingly, the decline was markedly more pronounced among women than men -- almost double in fact -- putting Nigeria further off track from meeting several Sustainable Development Goals, including its the Central Bank of Nigeria's own admirable and ambitious 80 percent financial inclusion by 2020 target.

Even with its young and growing population, there does not appear to be any sort of youth bias towards 'mobile-first' financial inclusion. While it is not uncommon in west Africa for young adults (15-24 years old) to have lower mobile money account ownership rates than the general population (in Ghana, for example, there is a 2 percentage point drop while in Senegal there is a 5 percentage point gap), in Nigeria the young are as uninterested in mobile money as their seniors, with barely 5 percent of under-25s having an account. This stands in contrast to countries such as Tanzania, Namibia and even Gabon, in which the young are more likely to have a mobile money account than their older peers. Something needs to change, fundamentally, in Nigeria if it is to even be on the right trajectory to ever reach the perceptibly unattainable goal of 80 percent financial inclusion.

The Financial Inclusion Lab Of The Future?

Given Nigeria's huge population of almost 190 million, the country's failure to fully embrace a successful financial inclusion agenda is a setback for the entire global financial inclusion agenda. Economists Tavneet Suri of MIT and William Jack of Georgetown have concluded that access to M-PESA helped to lift 2 percent of Kenya's population out of poverty. And while Kenya's situation is not directly replicable, if such an uplift in Nigeria were attained, it could, potentially, result in almost 4 million people, more than the populations of dozens of countries, being lifted out of poverty.

By and large, Findex shows that countries with enabling regulations around agents, e-money and tiered KYC experienced substantial improvements in access. In addition, the rapid progress made in markets that leverage government-to-person payments, like India, Mongolia and Iran, demonstrates the role a broader range of policy choices can play in shifting access.
Greta Bull, CGAP CEO

Despite all of this, however, it is important not to lose sight of the big picture: more than 500 million people have been financially included over the past few years. While there is still something of a dearth of robust research on the economic impacts of financial inclusion, tentative results suggest that the overall impact is positive for savings and other digital financial services, with knock-on effects for household welfare. Shorn of the unique traits of Kenya and M-PESA (which leaked, to an extent over into Uganda and Tanzania), the countries of West Africa make for promising laboratories for the further study of mobile money and financial inclusion.

From the lethargic giant of Nigeria to the tiny upstart of Gabon, West Africa offers multiple perspectives and policy choices, including an economic and monetary union that can establish useful baselines for measuring progress in the financial inclusion field. Consequently, and after far too long in the shadow of East Africa's trailblazers, the region now clearly merits close observation and a search for deeper insights, perhaps even into that currently vexing question of how to bridge the persistent gender gap in financial inclusion in developing economies.

Bike Sharing & The Ecosystem Effect: China Versus The US