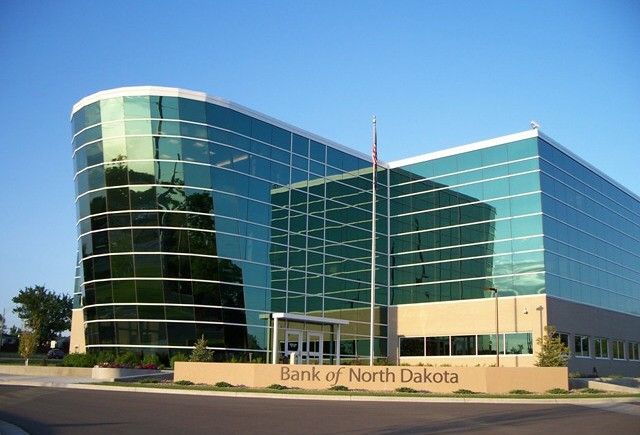 Agnostic of industry, the private sector is often esteemed over the public sector for its better performance in efficiency, transparency and reaction to shifts in demand. For many economists, this preference also extends to banks, even when there is murky and scant empirical evidence that can connect private bank ownership to greater financial stability and higher economic growth. While public banks may be susceptible to political meddling or disproportional non-performing loan portfolios, they too are underpinned by social mandates that put more emphasis on lending as a tool of development and inclusion instead of profit. In fact, China and India have long institutionalized this model, and fairly successfully so.

In light of both the muck and mayhem unleashed by profiteering private actors during the 2008 financial crisis - with USD $19.2 trillion in household wealth obliterated in the United States alone - and the monetary and regulatory clean-up that ultimately landed in the lap of the government, movements in favor of public banks have bubbled up from Maine to California. And, advocates are not only gunning after change through State legislatures. Technological advancements have rendered previously unthinkable policy options, like opening the central bank's deposit and lending windows to the public, possible.

After its independence from the British Empire in 1947, India inherited a fragmented system of small, private banks. It was not until more than a full decade later, and in the aftermath of 361 private bank collapses between 1947 and 1955, that regulation around capital adequacy, licensing and inspection was formalized in the early 1960s. After a period of culling and consolidation, a more compact banking industry emerged. The ambitions of banking executives and development-oriented policymakers of a freshly sovereign State, however, were sorely misaligned. What was most profitable for financiers did little to either mobilize productive industries like agricultural or lift the rural poor out of poverty. Between 1951 and 1967, the share of total credit funneled into agriculture annually stalled at 2.2 percent. The urban centers of Ahmedabad, Bombay, Calcutta, Delhi and Madras, meanwhile, accounted for 44 percent of all bank deposits and 60 percent of all credit.

In a bid to better equalize financial services distribution, Indira Gandhi and her cabinet nationalized 14 of India's commercial lenders in 1969, followed by another wave of 8 in 1980. The long-term calculus of these institutions shifted from profit to penetration and priority sector lending, with special interest in agriculture, small-scale industry, retail trade, small business and small transport operators. The result was an explosion in rural bank branches, both in absolute and relative terms: while rural branches only represented 13 percent of the total in 1952, that number more than quadrupled to 58 percent by 1990. In a similar vein, capital directed to agriculture had increased seven fold by 1989 to 15.8 percent. 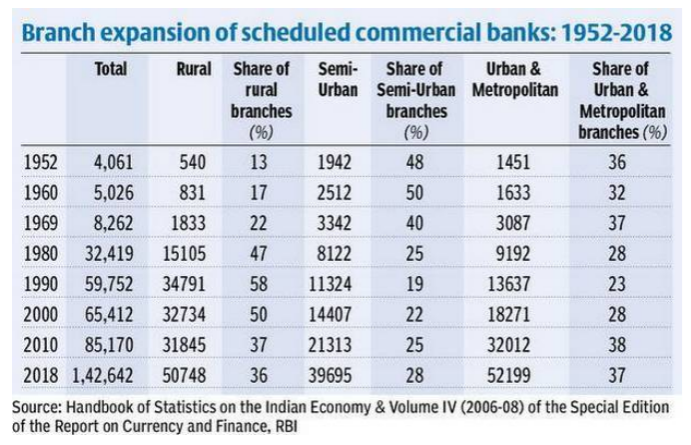 Even its most ardent detractors have conceded that bank nationalization was a primary force in democratizing access to financial services (accompanied by striking growth in national savings and investments) and solidifying self-sufficiency in India's food grains production. While liberalization and new prudential measures introduced in 1991 exposed serious structural vulnerabilities present in many public banks' operations, the Reserve Bank of India elected for reform instead of abandoning non-commercial mandates in entirety. In lieu of privatization, interest rates were deregulated and institutional and retail investors could now become minority shareholders in public banks, thereby ushering in new standards of disclosure and corporate governance.

India has perhaps realized that financial bodies do not have to subscribe to either the public or private model exclusively, but that each has its own role and its own inevitable corrections. Even with the rise of digitally enabled payments banks in India, administered by private stakeholders like Airtel and PayTM, the rural footprint of public banks still significantly outsizes all other options, capturing 83 percent of rural market share when agent presence is the proxy variable. Perhaps third party technology providers should recalibrate their digitization efforts and target clientele: out with the new, and in with the old?

A One Way Street?

In the wake of the financial crisis, economists in high income countries were asked, maybe for the first time, if public approaches were an antidote to the ills of poisonous practices sometimes diagnosed in private banking. And while economists appear to be biased against public bank ownership models, citizens seem willing to trade profit-maximization outlooks for ones that, while not loss-seeking, are anchored in serving public welfare benefits and objectives. In fact, private banks' impulse to make more and more money not only seeds risks that can jeopardize economic stability, but leads to a mindset that overlooks financing for productive ends, like credit for small to medium enterprises, if the returns do not sing.

In the United States, for instance, business loans composed just 11.5 percent of banks' balance sheets as of 2014. Government-owned organizations Fannie Mae and Freddie Mac, among other federal agencies, now manage or guarantee 90 percent of all mortgages. Interbank lending has also plummeted, with commercial banks responsible for just 26 percent of loans to other financial entities in 2012, down from 60 percent in 2006. Rather than stick to the bread-and-butter of traditional investment banking, megabanks have chased more lucrative (and opaque) trading activities. Commercial lending, then, has fallen into the domain of less regulated intermediaries like mutual funds, private equity funds, hedge funds, asset management divisions and, even fintechs.

There is a movement, however, rallying for a third option: local public banks. Currently, only one precedent has been set in the United States. In 1919, the Bank of North Dakota was formed by farmers who had repeatedly experienced land dispossession at the hands of out-of-state banks. All of North Dakota's revenues, which have ballooned with the gold-rush of fracking, are deposited in its vaults, which over the years accumulated USD $7 billion. The bank has a better credit rating than J.P. Morgan Chase, and with no shareholders to hollow out its profits, it has seen spectacular success in vitalizing the surrounding locales with below-market interest rates.

During the financial crisis, the Bank of North Dakota allowed smaller community banks to stay afloat through the provision of letters of credit, loan sales and bank stock. North Dakota, itself, was the only State to escape dropping into the red throughout those turbulent years; additionally, it boasted the lowest unemployment rate, the lowest default rate and the lowest rate of foreclosure.

Activists who hope to establish equivalents across the United States have struggled to acquire de novo bank charters, which are designed for private financial institutions and require FDIC deposit insurance which poorly translates to public modes of banking. In California, hotly debated Assembly Bill 857 would create a regulatory framework idiosyncratic to municipal banks. Bill feasibility studies, task forces, ballot measures, pending legislation and more all pertaining to public banks have mushroomed across the union, a sign that, at the very least, enough of the American people are unhappy with the banking choices at their disposal to explore alternatives. 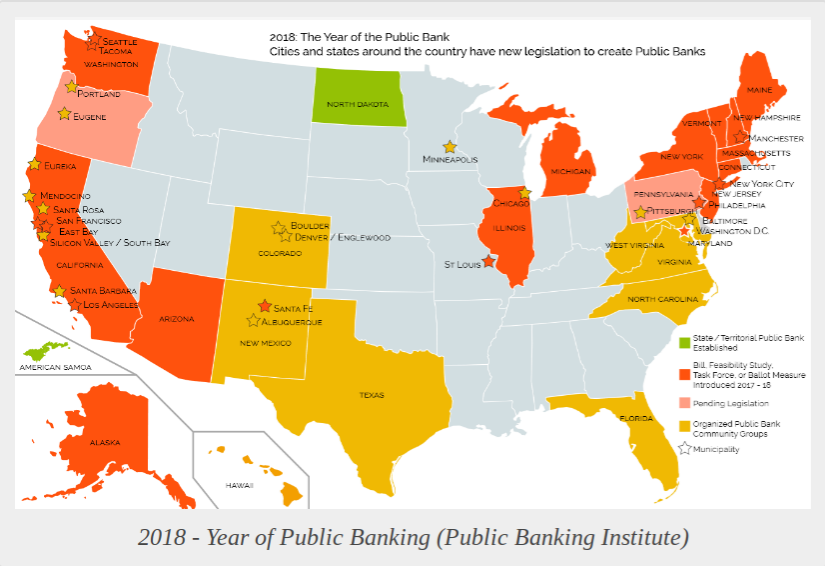 Calling In The Big Guns

Critics are right, though, to question who will carry the liabilities should the public banks of cities or states rack up more non-performing debt than capital available. Ellen Brown, Chair of the Public Banking Institute and author of "Banking on the People: Democratizing Money in the Digital Age" believes the solution lies in involving the Federal Reserve. In China, the central bank supports insolvent public banks by writing off bad debts instead of sentencing them to bankruptcy. Or, reminiscent of its dealing with the mortgage-backed securities during the financial crisis, the Federal Reserve could simply buy defaulted loans with little detriment to the economy. The political will to materialize such federal interventions, while seemingly unfathomable now, might be just one speculation-fueled crash away - especially if that crash is again then subsidized by the tax-payers.

What is more, is that technological developments could fundamentally transform the capacities of a central bank (and reinvent the concept of public banking itself). If central bank digital currencies were to normalize, central banks could universalize remote access to its deposit window, whether for individuals, institutional private lenders or public banks.

"The policy change would prevent bank runs, since the central bank’s liquidity is unlimited and so there would be no incentive for depositors to panic and run. Opening the Fed’s deposit window to all could also eliminate the need for the repo market, with its reliance on risky “rehypothecated” collateral. Large institutional depositors would have a safe place to park their money, and banks would have an unlimited source of liquidity, without resorting to the repo market." Ellen Brown, "Banking on the People: Democratizing Money in the Digital Age"

Likewise, advances in the automation of banking services could similarly widen the pool of borrowers able to draw from the central bank's lending window and end commercial banks' monopoly on the creation of money. While much of this theory is still predicated upon both unproven technology and monetary policy not yet peer-reviewed, tried or tested, what matters is that the very theoretical constructs of banking are expanding in tandem with digital finance. The private sector holds no patent on this innovation, or its application - and increasingly so, the general public seems less satisfied with banking distributors concerned only with profit at their expense.