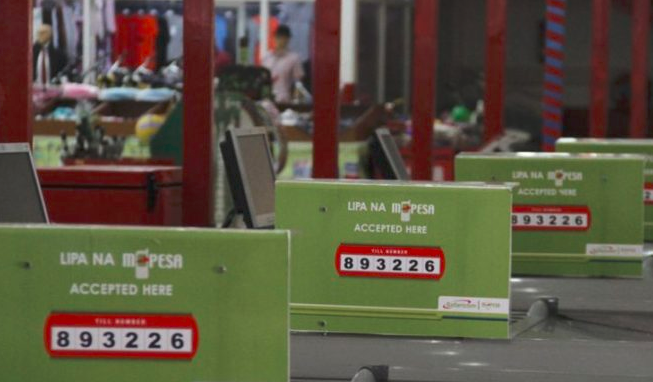 Earlier this year, Mondato explored the insights emerging from the Global Findex data-set on financial inclusion, highlighting the ascendance of West Africa on the mobile money scene, as well as the troubling gender gap dynamics in digital finance that mirror in many ways those in traditional banking. This week, we step back again to look at the global mobile money picture by diving into GSMA’s suite of mobile money trackers going back to the start of the millennium with an eye towards the depth and breadth of mobile money product penetration trends that will shape the sector in 2019 and beyond.


While the ability of mobile money to expand financial access lies in the transition of old-school banking practices into 1s and 0s, a nuanced understanding of digital finance requires moving away from a binary view of access. The GSMA’s Global Mobile Money Dataset echoes this need for analyzing multiple dimensions of growth, principally tracking four distinct metrics of mobile money penetration globally: availability, accessibility, adoption, and usage.

Each tells a different story from a given perspective in the mobile money value chain: from the number of registered mobile money providers active in a market, for example, to the size of the agent network greasing the ability to meet demand, to the frequency of usage across offerings that ultimately proves product-market fit.

Diving into the data, Sub-Saharan Africa remains, unsurprisingly, the world’s leading region in mobile money with nearly US$20 billion transacted by end of 2017. But South Asia - a group comprised of Afghanistan, Bangladesh, India, Maldives, Nepal, Pakistan, and Sri Lanka - represents a group that is not only overtaking African mobile money darlings in East Africa by some metrics of growth, but also beating them out by absolute size (as indicated by the number of registered and active accounts).

Easypaisa, for example, one of nine providers in Pakistan, has reached the global leaderboard by size with over 7 million users alone. And while India’s relatively tepid mobile money adoption disappoints some, deviating from the orthodox as it has with a bank-led mobile money model that is evolving into the philosophy of payments banks, Indian companies are not being left behind. New Delhi-based Bharti Airtel owns Africa’s 2nd largest telecom, Airtel Africa, which just raised US$1.25 billion to double down on its mobile money offerings continent-wide.


A thorough inspection of usage metrics reveals the diversity in use-cases which extend beyond the P2P transfer, or, for many, the ‘obvious’ mobile money solution. Other operations logged by the tracker include airtime top-up, bill payment, bulk disbursement, cash-in, cash-out, merchant payment, and of course international remittance. While airtime top-up is by far the most highly used mobile money functionality (representing almost double the amount of completed transactions as cash-in functions, the runner up) it represents only a sliver of revenues relative to P2P transactions, cash-in & cash-out (CICO) operations. 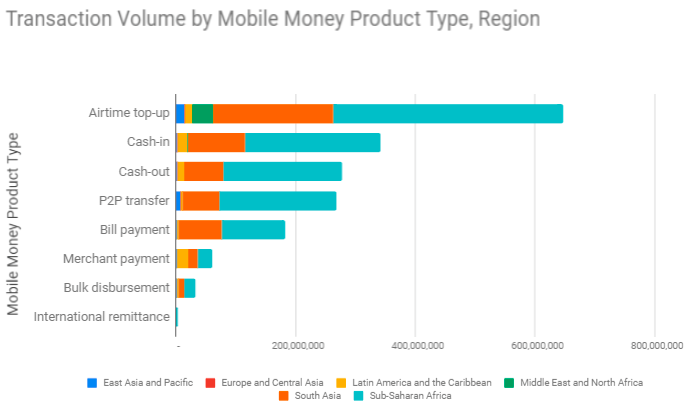 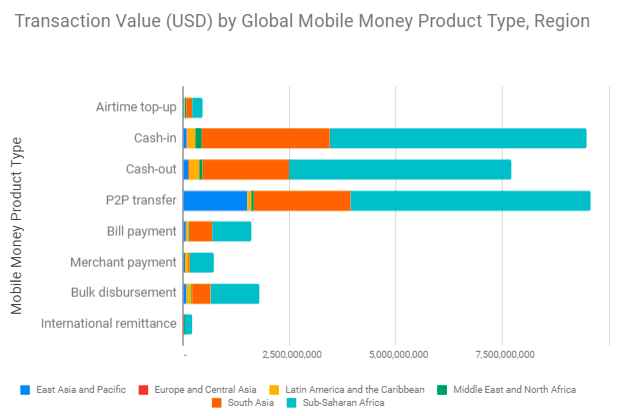 This dynamic illustrates part of the strategic play by mobile money operators. Across the five broad models of mobile money operators, CICO is the most significant revenue driver throughout. These operations, however, involve transaction costs that result in slim margins. Transactions - including P2P as well as the other use-cases described above - can yield margins exceeding 75 percent, enabled by the low-costs of executing digital transactions once the infrastructure is set-up. With margins like these, it’s no wonder mobile money accounted for a quarter or more of Safaricom and MTN’s revenues by service line and average revenue per user respectively, according to the GSMA.

Passing On The Gravy


Yet, not everyone is jumping on the mobile money train. A number of countries around the world display persistent reticence in respect to mobile money adoption, despite mounting evidence that there is money to be made by serving vast swathes of financially under-served populations.

Conspicuous laggards like India, Nigeria, Egypt, and South Africa have yet to see a widespread adoption of the services to the extent that their large populations, including sizable middle classes, would suggest. Perhaps the simplest explanation for the lag can be summarized by the notion that incumbents don’t just succumb. As Mondato has previously explored, in places where financial institutions are relatively strong - and perhaps hold some influence on regulators - the growth of mobile money services faces hurdles that impede getting out of infancy to scale.

And yet it is clear that digital financial services are where the smart money is going. “Fintech” as a class consistently captures the lion’s share of seed and early stage funding, at least in Africa, and exhaustive analyses investigate how banks, telcos, and even regulators can butter up to the growing cohorts of start-ups banking on riding the wave of mobile money opportunity to Series D and beyond.

This is the case in the hottest markets like Kenya, as well as in some of the most challenging like Nigeria. This is even still true in the most extreme of circumstances, like Somalia. Mobile money there has become so central to day to day transacting that the US$2.7 billion digital volumes registered monthly (much of which pays for water, electricity or coal) capture more market share than even fabled cash itself. Adoption is so ubiquitous that, just last month, Quartz Africa proclaimed: "mobile money transactions in Somalia are overtaking Kenya."

Going forward, mobile money operators have a lot of room to experiment in luring more and more customers into the high-margin transaction space - and much of that innovation will come through innovative partnerships. In April, Safaricom partnered with PayPal to allow e-commerce businesses to seamlessly transfer money between the two services and into their mobile wallets, and launched the Bonga chat service which lets M-Pesa users talk while sending and receiving money.

Additionally, with moves spearheaded by Fintech players like FlutterWave, who recently announced big plans for streamlining payments on the continent and then 'upped the ante' with even bigger capital raises, the spread of mobile money products beyond P2P is poised to grow significantly. After bagging partnerships with the likes of Facebook and Uber to receive payments from African customers, Flutterwave has managed to process US$200 million in less than eight months of operations alone. Flutterwave is now unwrapping a unified mobile money app for consumers called Barter that promises a seamless integration between existing wallet services mostly used for P2P services and other high-value mobile money products - an interesting pivot into the P2P space after making waves in the more niche merchant transaction:

"With Barter, we’ve built an ecosystem that empowers users to take advantage of unique payment methods like cards, mobile money wallets, USSD and direct bank accounts to fund their balances on Barter which enables them to make global merchant payments and p2p transfers both to users of the service and directly to bank accounts and other mobile money services in operation on the continent." Eche Enziga, Product Global Expansion at FlutterWave

Five African countries will soon get to experiment with this tech, and will give the rest of emerging markets a taste of the future if the Africa-led model of mobile money innovation persists.

Longer term, the continued proliferation of smartphones stands out to expand the possibilities for mobile money transactions beyond the CICO + P2P dominant situation that is still the pervading paradigm for digital transactions in emerging markets. Indeed, by 2025 the two most active mobile money regions are poised to experience a ‘smartphone boom’ - smartphone penetration as a percentage of total mobile connections will nearly double in Africa by 2025, while the South Asia split will reach the highest of any emerging market region at 81 percent of total mobile connections, behind only Europe and North America.

This phenomenon, along with the movement towards lighter, data-efficient, and locally-appropriate UI design, holds promise for a wider array of digital applications to deepen the usage of the still-fledgling mobile money ecosystem offerings. In the immediate, however, many would argue that the lowest hanging fruit lies in bringing international remittances into much greater prominence for mobile money. Despite the fact that remittance players that play nice with mobile money accounts, like WorldRemit and TransferWise, are forcing incumbents like Western Union and MoneyGram to slash costs and pivot to digital, remittances via mobile money still represent a paltry 3 percent of the remittance market to Africa.

The emerging success of Uganda’s foray with crypto-trading, where 40,000 traders signed up with Binance in their first week, reminds us however that there is no doubt that we will continue to see innumerable, unexpected models as commercial stakeholders chase the high-margin transaction action. And yet, when one looks at nearly 20 years of limited uptake across the variety of mobile money products available beyond cashing in, cashing out, and P2P, the proof is in the pudding that the breadth of digital solutions is only as impressive as the depth of the penetration that follows it.