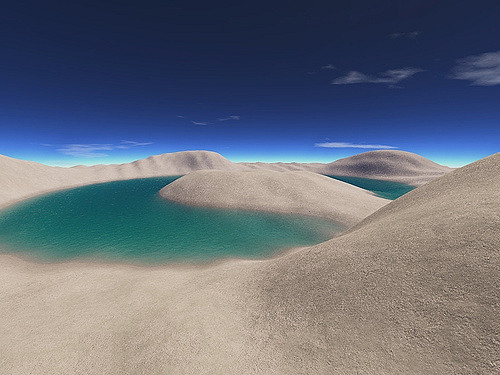 There tends to be a great deal of reductionism when conversation turns to the Middle East and North Africa. Islam, oil and war often emerge as catch-all areas of fixation when brooding over its past, present and future. And while these variables are clearly important, other co-existing factors will too impact whether the Middle East emerges as a resilient or fractured force.

With much of its political unrest stemming from socioeconomic woes (which, in an almost unprecedented fashion, rocked Jordan this past Ramadan, the region's bedrock of stability) or heavy-handed governance tactics by resource-greedy Rentier States, financial inclusion policies and strategies to diversify economies (cough, cough, GCC) are part of a long line of last-ditch efforts to avoid the Middle East becoming a demographic and wealth distribution powder-keg. How has mobile money, digitization and fintech played into these new sets of priorities, if at all?

While much of the developing world has registered some meteoric gains in account ownership, the Middle East and North Africa remain disappointingly consistent in the rate of financial services adoption. Results from the latest 2017 Findex edition underscore a comparative lagging in the growth of the banked segment, whether through a financial institution or a telco. 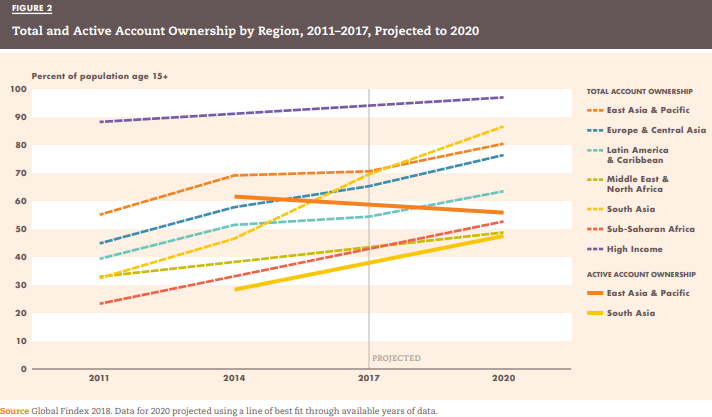 In only three years, Sub-Saharan Africa, which was at more than a 10 percentage point disadvantage as of 2011, has caught up to MENA. Both groupings are now a smidgen over the 40 percent mark in terms of account ownership as a function of population. South Asia (a neck-and-neck contender with the Middle East in 2014) has surpassed it by nearly 30 percentage points. Of course, interplay by multiple determinants might be able to explain holistically the diverging gaps. Qualifications aside, the GSMA's mobile money metrics suggest that one factor may remain paramount: mobile money.

Not only has mobile money adoption (as measured by registered accounts here) plateaued since 2012, absolute numbers brought to the table by MENA look puny in comparison - 40 million against 200 to 300 million. A large element of this is likely related to the ubiquity of services available. According to the GSMA's tracker, there are currently 18 mobile money deployments live in MENA as of June 1st, 2018 (6 in Tunisia, 4 in Egypt, 2 in Iraq, 2 in Jordan, 2 in Morocco, 1 in Iran, 1 in Qatar). So, of the 21 or 22 countries typically shuffled into MENA's deck, a mere 7 of them are home to active deployments. Of those 7, Tunisia and Egypt disproportionately form the lot.

It seems, then, that there is an obvious problem with the breadth of mobile money services across the region, a surefire obstacle to accelerating financial inclusion. Depth, however, is equally important component to catalyzing adoption. In a quick survey of MENA's mobile money landscape, product diversity seems stinted. Even scaled cross-country providers like Zain (Iraq and Jordan), Ooredoo (Tunisia and Qatar) or Orange (Tunisia along with a blend of other regionalities from Sub-Saharan Africa to Europe and Central Asia) are unable to beat the cash-in, cash-out, person-to-person transfer, bill payment, merchant payment and airtime top-up product mix.

As evidenced by the GSMA's tracker, no providers have yet broken ground in person-to-government - or vice-versa - innovation, loans delivered on mobile networks' rails, savings accounts with interest or international remittances (with the exception of Ooredoo Qatar's partnership with MoneyGram and Egypt's still unfulfilled national payment switch ambitions). A combination of things are the likely collective culprits, nearly all of them falling outside the control of telcos. From a historical legacy of prohibitive regulation, especially in regard to agent banking, to know-your-customer requirements that are cumbersome and not tiered based on risk, MENA financial policymakers have a way to go in loosening the banks' grip on the financial sector.

The needs of swelling refugee and internally displaced populations stranded for extended periods of time, however, can no longer accommodate governments' inaction. Often shut out of traditional modes of finance by account minimums, identification requisites or expectations of a fixed address, refugees often resort to their own informal social networks for help.

The Central Bank of Jordan, aware of these structural barriers, launched the Mobile Money for Resilience initiative this year with support from the Bill and Melinda Gates Foundation. The initiative intends to digitize cash assistance by funneling it into a comprehensive mobile account equipped with money transfer, digital payment, saving and credit services (a huge step up from money withdrawal, the only banking feature that has previously been at the disposal of refugees). And, who better to pilot this MENA first than a country who has hosted refugees for the better part of 70 years?

Microfinance: The Way To MENA's Heart

In Egypt, for example, the door to the microfinance space was flung open in 2014 through the ratification of the Microfinance Law, resulting in a shotgun proliferation of licensing by the Egyptian Financial Supervisory Authority (3 commercial microfinance entities and 725 NGO MFIs had permission to operate as of 2016). The Jordanian microfinance sector experienced a similar jolt of change in 2016 National Microfinance Policy Framework’s Action Plan underwent tweaks.

The hand-in-hand nature of microfinance and financial inclusion is intuitive to Kiva, who has crowdfunded loans to low income entrepreneurs and students at zero percent interest in the region for about a decade through partnering institutions.

"Of the 13 organizations who post loans on Kiva's platform in the Middle East and North Africa, 11 of them are MFIs. The MFI industry here is a foundational pillar and supplier of finance to the underserved. There are also some less conventional approaches like NGOs implementing microcredit programs, but by in large, these business models do not see the scale that we have reached at Kiva with our MFI partners." Lev Plaves, Senior Portfolio Manager (Middle East) at Kiva

MFIs, therefore, are prime candidates for digitization, especially if one end-goal is the assimilation of hard-to-reach users into the digital economy. In MENA, some MFIs have integrated mobile wallet functionality for repayment collection, like Microfund for Women's use of the Mahfazti wallet by Umniah. Outside of payment digitization (at least as far as client-facing activities go), progress is muddled. Disbursement procedures, specifically, still leave much to be desired. While MFIs have considered plopping loan funds directly into e-wallets like Mahfazti, as confirmed by Mr. Plaves, concerns over agent training and liquidity have caused enough friction for the plans to be abandoned altogether.

Sadly, it is unlikely that MFIs will ever be more than the grease that incentivizes microfinance borrowers to embrace digital for convenience's sake. Of the entire Middle East, only in Syria and Yemen are MFIs authorized to touch deposits - hence why the most common funding structure for MFIs here is equity share. With deposit-related products off the table, mobile banking for socioeconomically disempowered users will not find its footing through MFIs.

The GCC Strikes Back

The economies of the Arabian peninsula are long accustomed to finger wagging over their over-reliance on oil to keep afloat government budgets. With the decline in oil prices, many of the GCC's members are feeling the pinch sooner than anticipated and the timeline for economy diversification has shrunk from 100 years to half or even a quarter of that. What better way to put money to use than to create more money as a financial hub?

With wealth pouring into the peninsula since the discovery of black gold in 1938, banking infrastructure has had the luxury of a 'slow cook.' It is little wonder, then, that account ownership in the Gulf is qualitatively different to that of developing MENA. 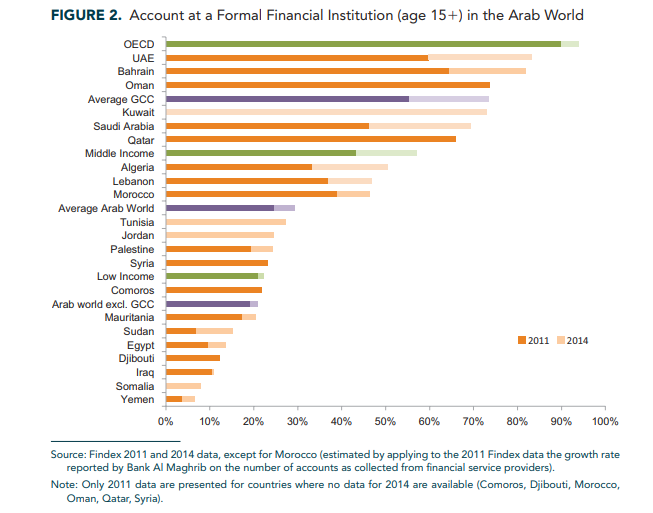 So while the GCC may still be playing catch-up to OECD nations, cities like Abu Dhabi, Dubai and Riyadh probably have more in common with financial centers like London, New York and Hong Kong than Cairo, Amman or Baghdad. And, their fintech is showing it.

Saudi Arabia and the UAE recently announced a joint venture to conjure up a 'Bitcoin-rival' cryptocurrency designed to ease cross-border transactions between the two. Liv, Emirates NBD's stab at a mobile-only bank to lure in millennials, is attracting 10,000 customers a month. The gulf, too, is a hotbed for remittances due to the massive import of labor from South Asia, Africa and beyond (the GCC is the second largest remittance market second to only the United States). And while there has been some movement on the mobile money remittance front through Ooredoo, fintechs are rolling out smartphone apps connected to mobile banking technology. Regulatory sandboxes in the UAE, Bahrain and Saudi Arabia will allow breathing room as many of these startups and bank collaborations graduate past the initial phase of fragility.

The flurry of exciting headlines belies the shallowness of the ecosystem, however. Of the US$ 50 billion invested in fintech globally, only 1 percent of that trickled into the Middle East. The regional breakdown of that 1 percent is also extremely lopsided - in 2017, the UAE received 70 percent of all fintech investments, followed by Saudi Arabia at 9 percent. None of this is to suggest that the developing countries of MENA are at the metaphorical children's table. Despite a different level of financial infrastructure to that of the GCC, Egypt, Jordan and Lebanon still have lively fintech scenes. Perhaps given the obstacles to mobile money and MFIs, fintech centered around bank spin offs is the closest oasis for the unbanked who are still wandering in a digital desert?